The pandemic comes to the elderly - Kosovo 2.0

The struggle of loneliness that befell the elderly during the pandemic was there all along.

Halfway through April 2020, when the coronavirus was causing hundreds of deaths per day in Spain, Cristina, our K2.0 colleague from Spain, was discussing troubles with her mother in Ibiza over the phone.

“Thousands of people have died, most of them elderly, and nobody cares just because they are old!? Imagine if thousands of children died instead, within only two months! This is a massacre,” she told her daughter from their family home on the Mediterranean island.

It was already clear that the elderly were most vulnerable to the virus,while the pandemic was rapidly making the rounds in some EU countries like Italy, Spain and France.

Dr. Hans Henri P. Kluge, Regional Director for Europe of the World Health Organization said in April that observations in Europe show that the elderly are much more prone to the severe illness caused by COVID-19. He says that the overwhelming majority of coronavirus victims were older than 60, with the risk increasing for individuals who have at least one pre-existing condition — cardiovascular disease, hypertension and diabetes in particular — that primarily ail older people.

With these statistics in mind, Cristina’s mother’s words further intensified the fear of indifference for older generations. After the confirmation of the initial COVID-19 cases in Kosovo, lockdown and quarantined municipalities during spring, K2.0 wrote about the experiences of the elderly in the country — who were advised to shelter in place except in case of emergency.

The economy gradually reopened in June, and what seemed to be a calm start to the summer turned into the accelerated transmission of the virus all over the country during July and August. The public health system experienced a crisis when confirmed COVID-19 deaths increased daily.

Although the new measures that eased certain restrictions were introduced during the summer, a curfew that targeted older people was always in place, meaning that they were only allowed to move freely in the early morning and in the late afternoon.

Even though it had already been a few months since people began coexisting with the virus, there was no social discussion about how the continuous changes of measures were affecting the elderly in communities and families alike. Thus, we decided to once again direct our attention to the elderly, this time by spending more time with them to explore the feelings of stigmatization, exclusion, discrimination, isolation and loneliness during the pandemic.

However, we ended up exploring old age itself.

For a whole month, we spoke to women and men over the age of 65 in the parks and public gardens of Prishtina’s neighborhoods, places that are traditionally frequented by the elderly of the capital, and then went to other smaller villages and towns in the country.

We were acquainted with the irritation of patriarchal men in their struggle to protect their damaged authority following their noninvolvement in the economy, and the vivacity of women who need not worry about the preservation of a power they never had. We were acquainted with the feeling of being useless and a burden when pensions do not even suffice for birthday presents for nephews and nieces, when sons and daughters choose to challenge the old custom of living in a large family and the state does not intervene for more dignified care.

We were closely familiarized with yearning and melancholy, fear and loneliness. We learned about stories of progress and stories of failure, with those who dread addiction and being passed over, and with those who anticipate old age as an important part of life.

But regardless, we only managed to scratch the surface of what it means to grow old in Kosovo. But one thing seems clear: “No one should be alone in their old age,” as Ernest Hemingway’s Santiago in “The Old Man and the Sea” pondered.

This adage is confirmed by the protagonists of our story: Drita and Mustafë.

Exactly a few minutes before the clock hits 5 p.m., Mustafë Krasniqi queues in front of the Social Center for the Elderly in Prishtina, on the road named after the widely known Llapi Mosque, a few hundred meters away from the old municipality building. Every afternoon on weekdays, seniors who live alone, single mothers, broke students, poorly-paid workers and other people in need wait in line with over 50 other people to get their free meal from the soup kitchen.

On a September day, he takes his beans, bread and whatever fruit is available and waits at the closest bus stop to return to his village of Llukar, which lies 5 kilometers away from Prishtina’s city center. For him, living alone — in the house that was built by his great-grandfather and rebuilt after being destroyed in the war — with a pension that barely helps him make ends meet month after month, the meal offered by the Municipality allows him to save up, but also mingle his gloom away.

His story is typical of the working class in Kosovo, where one’s origin is almost suspiciously telling of one’s inability to have social and economic mobility: He was born into a poor family, finished only a few grades in elementary school, worked his whole life as an urban bus conductor and is now a pensioner in the first category of the contributors’ plan, which includes those without a formal education.

Widowed, having lost two children and with another three who do not live nearby, he finds empathy and closeness among the elderly at the Center. 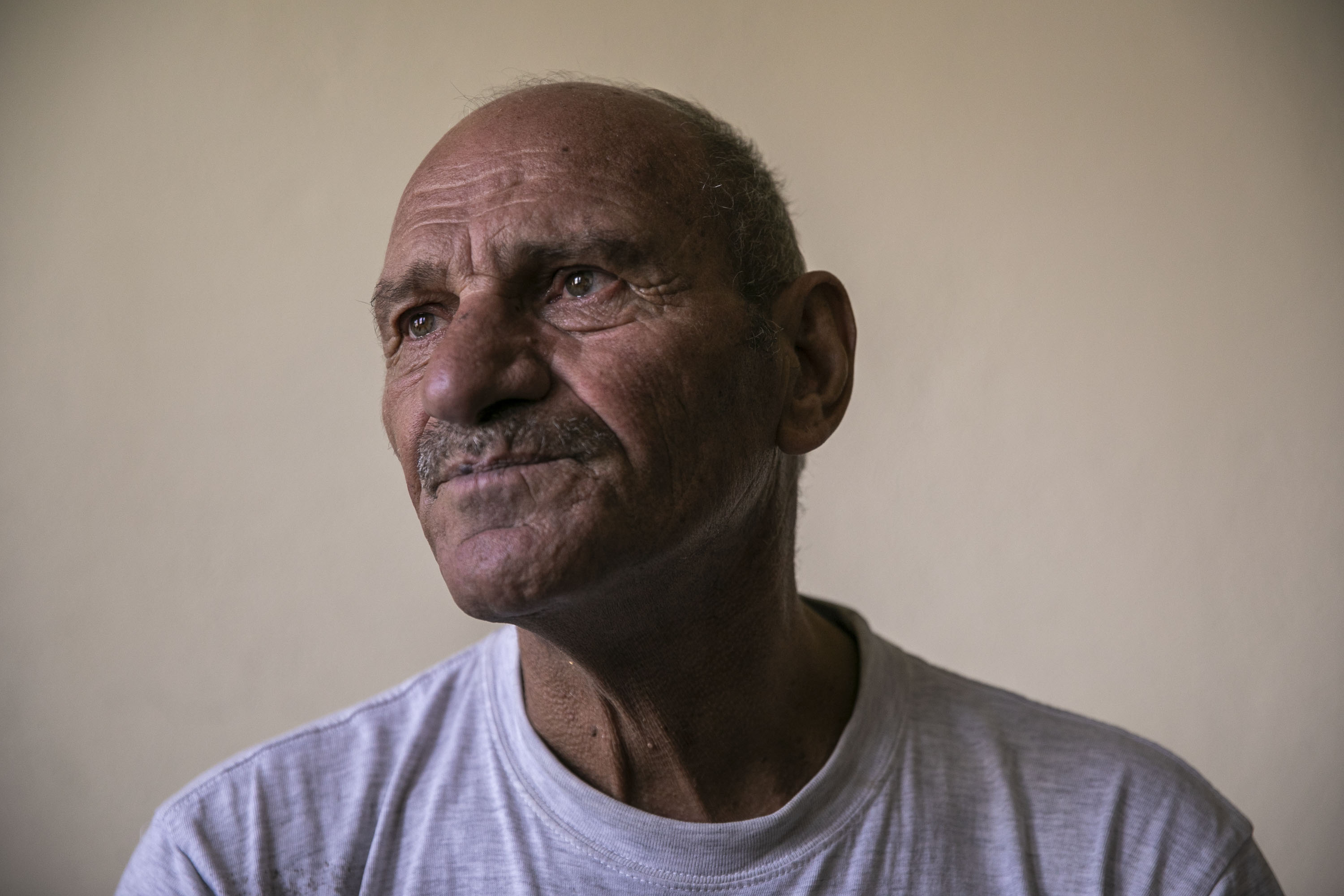 Lacking health insurance, he would be entirely unable to afford any sort of essential care in case of a serious infection with the virus — patients report paying hundreds of euros in expenses.

Being widowed, having lost two children and with another three who do not live nearby, he finds empathy and closeness among the elderly at the Center, amid a symphony of clings and clangs caused by the seniors as they twirl spoons to dissolve sugar in their small tea glasses.

However, in order to curb the spread of the virus among the most jeopardized, the social centers for the elderly in Prishtina remain closed since the beginning of the pandemic. Some of the daily visitors — mostly men — have transported their social life to the front of cafes. As the weather gets colder in fall, this form of socialization will soon come to and end too.

All of the 82 chairs within the Center — that accommodate pensioners who come from Prishtina, Podujeva, Fushë Kosova and even Lipjan — were continuously occupied, while many other seniors would stand and wait until a game of chess was over or a table was freed. In many cases, Mustafë’s friends and acquaintances would end up in the ER from high blood pressure caused by excessive tea consumption.

“When the Center was open, we came and had one or more glasses of tea and went out,” he says. “Young people have things they can do, but not us old folks. There is nowhere else we can go.”

Besa Sinani, the Center’s manager, says that she often cleans over 100 glasses each day until the large sack of black tea is completely empty, which happens around the same time when everyone leaves at closing time.

In the meantime, Mustafë says that “we need to get through somehow” until the Center reopens for them to move from one day to the other more comfortably.

The loud and distressed voice of a friend sitting nearby was noticed by Drita Nushi, despite the blasting music and laughter on the bus. The woman, who had been talking on the phone, explained to Drita that the first cases of COVID-19 were confirmed in Albania.

The bus full of women, mostly over the age of 65, was returning from a trip organized by the association called the Collective of Women Pensioners. In what had already become a tradition, Drita and dozens of her friends had spent their weekend abroad. This time in Pogradec, Albania.

“Let’s be careful so they won’t hear us,” Drita suggested. “Let this remain between us so that we can have fun before we go home. When we’re in high spirits as a group, we also take that mood home.”

One of her traits is to diffuse serious situations through humor and mirth. And that is what happened this time around. While lockdown was an unprecedented challenge for many people around the world, Drita says that she had a relatively stress-free time, finding ways to amuse herself and her two nieces.

That is more or less what she would do anyway after retiring eight years ago, when her routine shifted overnight after more than four decades of work.

“I took it as a reasonable thing [retirement]. I tell myself: I did my part. I need to make room for someone else, as someone else did for me,” she says. “And today it’s much tougher for young people to get jobs.” 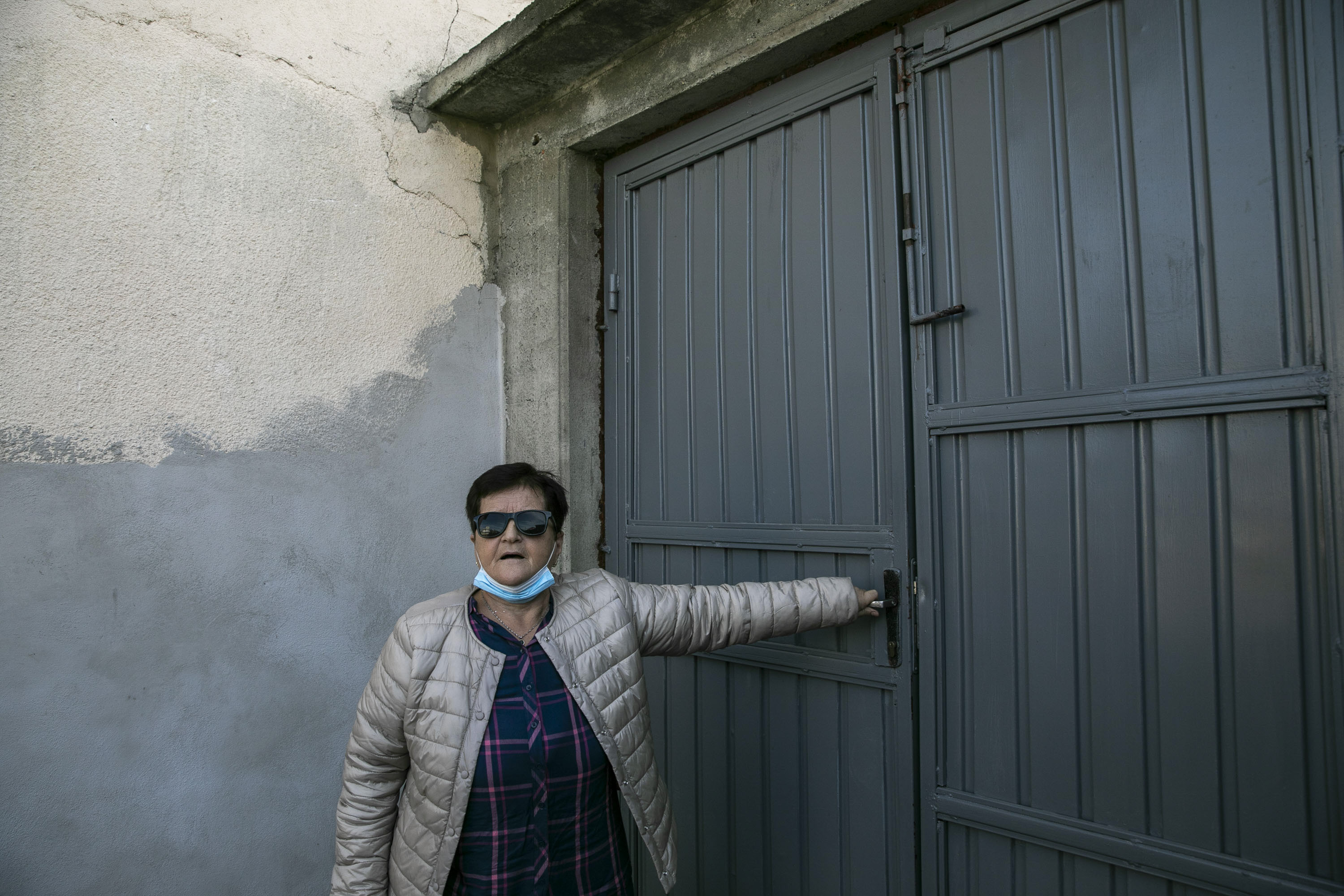 She says that she had to adopt this method of coping with life years ago after her husband was killed by Serbian forces in their family home during the 1999 war.

“After experiencing war, I take things more easily,” she says.

But as much as tragedy may have affected her forties, it seems that she has a n unceasingly gift to marvel at life and persist.

She finished her bachelor’s degree at the philosophy department of the University of Prishtina. Throughout her 18 years of teaching at Hajdar Dushi high school in Gjakova — after tucking in her four children — she would prepare lesson plans for seven subjects: Philosophy, logic, sociology, pedagogy, introduction to state regulation, Marxism and teaching. In the late ‘80s, she began teaching at a medical high school, after the war she was employed at the Education Inspectorate in Prishtina.

Now, she says that her 340 euro pension is enough to lead a good, modest life. As a matter of fact, she is among the less than 30% of women who benefit from contributor pensions, as opposed to the rest, which are men. According to her, the state needs to increase pensions so that her peers are able to go out and socialize.

“I have loads of fun with my children, but I know when it’s me time,” she says. “Friendships are very important to all of us in life. Loneliness can suffocate you, it can crush you mentally.”

This article was produced as part of the project ‘’Innovation for resilient media and citizen engagement’’ with the financial support of the European Union Office in Kosovo and implemented by Kosovo 2.0 in partnership with GAP Institute.  Its contents are the sole responsibility of Kosovo 2.0 and GAP Institute and do not necessarily reflect the views of the European Union;