Success stories from the shadows

Roma, Ashkali and Egyptian women who are breaking the stereotypes.

Arjeta*, almost 14, was forced to endure the scorching July heat to clean the windows of cars  that stop at a red light, in exchange for money. She works one of the main streets in Prishtina, near the Mother Theresa Cathedral. Together with her much younger cousin, they work from morning to evening.

Arjeta says that she has never been to school, but that this isn’t a big problem for her. “I go to the mosque sometimes,” she says, adding that she learns some things here and there. She has been voluntarily wearing a veil since the age of 7.

For Arjeta, like many other girls of Roma, Ashkali and Egyptian communities, the road to knowledge, independence and dignified careers is often just a beautiful dream.

However, there are girls and women from these communities who have managed to break social barriers to build independent lives, to get educated, to find sustainable jobs and to at least try to change their lives.

There is more than one definition of success. All of the girls and women who are part of this story have achieved success in their careers in different forms and in different periods in their lives.

Farija Mehmeti (41) is one of them. She lives in the village of Lepina in Lipjan, not far from Marigona, one of the capital city’s more affluent neighborhoods. Her neighborhood presents a completely different reality from the one we see in Marigona. The houses are small and old, making it seem like nothing has changed since before the war.

Through painting, Farija is breaking the stereotypes surrounding women from the Roma, Ashkali and Egyptian communities in Kosovar society. Inspired and supported by her brother Bajram, she paints portraits of Roma women in Kosovo dressed in their traditional clothes.

“Some of them look quite sad, because this is how I present my feelings. Roma do not have many rights, are not properly educated — like girls and women of other communities — but also, from a social aspect, they are quite vulnerable in Kosovo,” Farija says.

Through her paintings, Farija and Bajram show the life of the Roma community in their small village, where they live among Albanians and Serbs, who comprise the majority communities in their village.

Farija’s portraits of Roma women resemble the self-portraits of Frida Kahlo the renowned Mexican painter who painted herself in vibrant colors in traditional Mexican clothes.

“Life in Kosovo is beautiful. I’ve been here since I was little, I grew up here. I like this place, I like the people, all people. But sometimes it’s difficult when you don’t speak the [Albanian] language,” she says, shrugging with pity.

Her message for all talented girls and women is never to give up on their dreams. 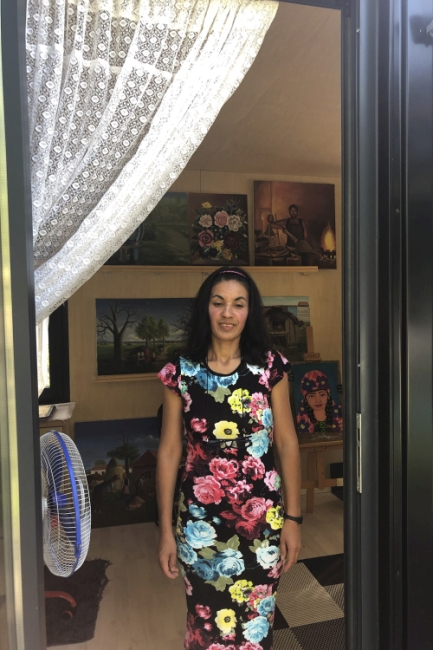 “The circumstances might not be the best and there might be other barriers. But you need patience, you need to be insistent and have hope, to wait for your moment.” - Farija Mehmeti

Vjollca, a woman from the Ashkali community, a mother of four, did not have a job until a couple of years ago. She worked very hard to raise her children.

Two years ago she began  training to become a tailor at Sa Punë, a business that employs women from the Roma, Ashkali and Egyptian communities. After beginning work as a tailor, together with a friend, she now trains other women from the community, bringing them together once a week in Janjeva.

Although she has a strong will to work, she says that she doesn’t earn enough to sustain her children. Nevertheless, she doesn’t give up. Every Wednesday she goes to Janjeva to meet and train other women. Every other day she makes bags, decorations and soap in her house, hoping that people will buy them.

Mimoza Gavrani has a different opinion about the segregation between communities and identifying as part of a certain community.

She is an educated Roma woman with ambitions for the future. Gavrani tells us about her path, which she says was different from that of other Roma women. She is a member of civil society and an activist who specializes in human rights and the rights of communities. She leads the Kosovo Advocacy Group, a think tank that advocates for the integration of Roma, Ashkali and Egyptian communities through research, analyses and media presence.

When asked whether she has ever thought about entering politics, she burst out laughing and said: “I don’t know, I can’t say that I haven’t. But if I would achieve less results than I do as a member of civil society, I wouldn’t do it.”

She grew up in Gjakova among Albanians, so Albanian is her first language. “There is still the cliche image that women from these communities are begging in the streets,” she says. “The image of Roma, Ashkali and Egyptian communities must change.”

She has a liberal approach to politics, believing that it is important to have equal access and comprehensive inclusion, especially for girls that belong to these communities. But she says that these women and girls are used as numbers and names by political parties. When decision-making and actual positions are in question, the plans change.

Mimoza cites Shirley Chisholm, the first black woman to be elected to the U.S. Congress: “If you don’t have a chair at an important table, bring a chair with you.”

In one of the alleys of an Ashkali neighborhood in Sallahane in Ferizaj, just before sunset, a few boys and girls are playing football.

I get closer to watch them play, and eventually strike up a conversation. They complained about their school, saying they have no space to play football. “What do you want to be when you grow up?” I ask one of the girls. “I wanna be an airplane driver,” she said. “Ah, a pilot,” I replied. “Yes!” she shouted enthusiastically. 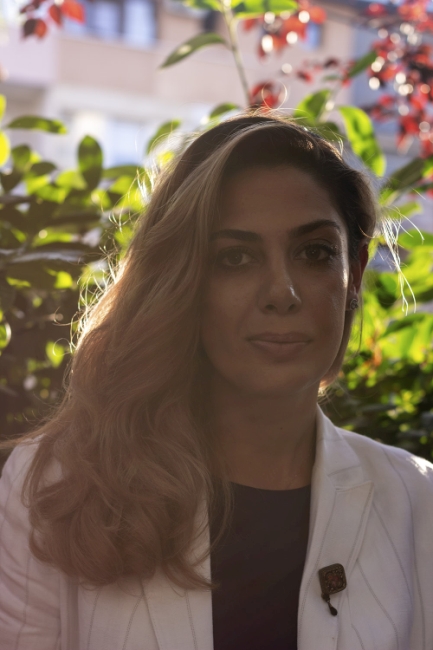 While the dreams of these young girls who play outside in the dusty neighborhood street are to touch the sky, many of them give up on their dreams quite early on and get married. Humbly respecting the wishes of their parents and the norms of society. Much more social and institutional work and dedication are needed so that the dreams of these young girls can come true.

*Editor’s note: The names of the children have been changed to protect their identities.

This article has been written as part of the second cycle of the Human Rights Journalism Fellowship Program supported by the European Union Office in Kosovo, co-financed by the project ‘Luxembourg support to civil society in Kosovo,’ financed by the Government of the Grand Duchy of Luxembourg and managed by Kosovar Civil Society Foundation (KCSF), as well as from the National Endowment for Democracy (NED). This program is being implemented by Kosovo 2.0, in partnership with Kosovar Center for Gender Studies (KCGS), and Center for Equality and Liberty (CEL).
Its contents are the sole responsibility of Kosovo 2.0, KCGS, and CEL and do not necessarily reflect the views of the donors.