Balkan unity in the Pride Parade

LGBTI rights supporters from across region at Kosovo’s first Pride.

“I am one of the LGBTI community and I wanted to be one more person present here. Everybody needs to do it — it is in the name of love,” says a Montenegrin young man amidst the loud music emanating from Prishtina’s Zahir Pajaziti square.

Wearing a cap and a colorful bandanna wrapped around his face, looking almost like a protester, he made sure his face was not recognized. With overwhelming media coverage of Kosovo’s first ever Pride Parade, he was scared that images of him might be seen by his relatives. He still hasn’t come out publicly as gay but came from Podgorica to support yesterday’s historic moment in LGBTI activism in Kosovo.

“I am here just to show people that we are the same as all others,” he explained. “We are not ill, we are not this or that, we are people as well. All of us need to go out and show support, and not just for us [LGBTI community], we need to support all minorities.”

Over the years, Pride Parades organized in neighboring countries have seen the presence of LGBTI persons and activists from Kosovo celebrating LGBTI culture, diversity, and calling for social inclusion and equality. Yesterday, in the first Pride Parade organized in Prishtina under the banner ‘In the name of love,’ many non-Kosovar LGBTI members and supporters returned the favor. They appeared among the hundreds of marchers waving rainbow flags behind the party truck that led the parade along Mother Teresa Boulevard. 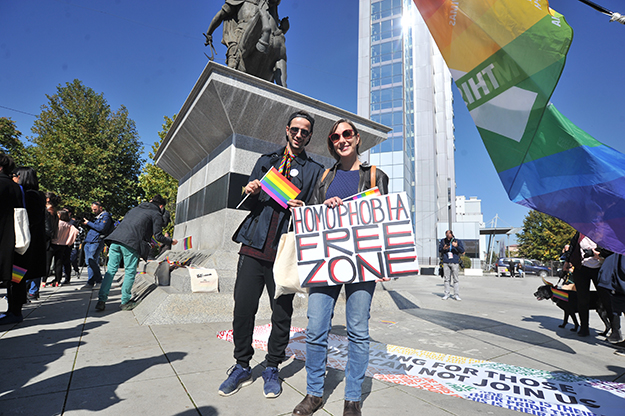 Ilina Mojsovska and Goran Pelovski traveled from Skopje for the parade to support the friendship between activists and assure people of the safety of coming out. Photo: Atdhe Mulla / K2.0.

Over the music of Dua Lipa and Lady Gaga, K2.0 caught up with a few LGBTI supporters from the region to talk about the importance of activism that transcends ethnic lines and divisions.

Ilina Mojsovska (34) and Goran Pelovski (25) travelled from Macedonia to show their support. Mojsovska works as a psychologist with Subversive Front, an LGBTI organization based in Skopje. For her, support for the parade needs to go beyond the LGBTI community and its borders.

“I am a straight ally, and very happy to be here and to support our friends in Kosovo and all the people who are here today. I want to show love and to support the friendship,” she told K2.0. “The LGBTI community [needs to feel] that they deserve love and respect. 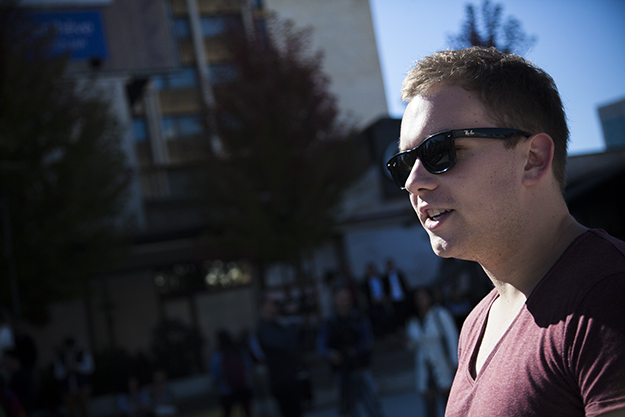 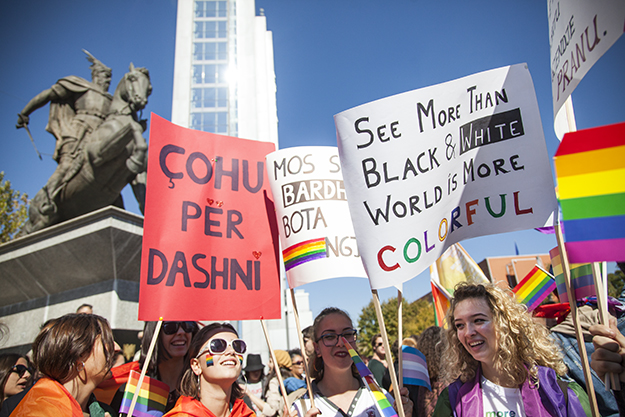 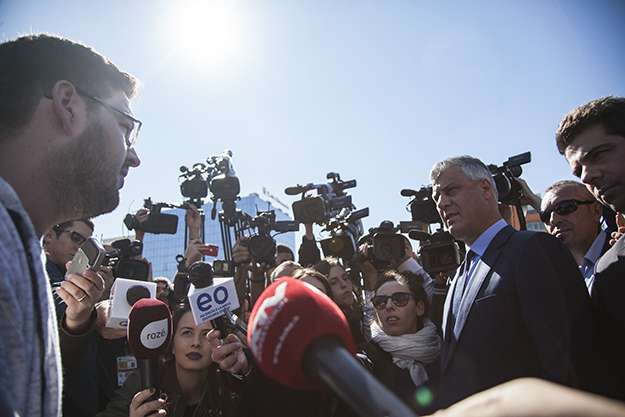 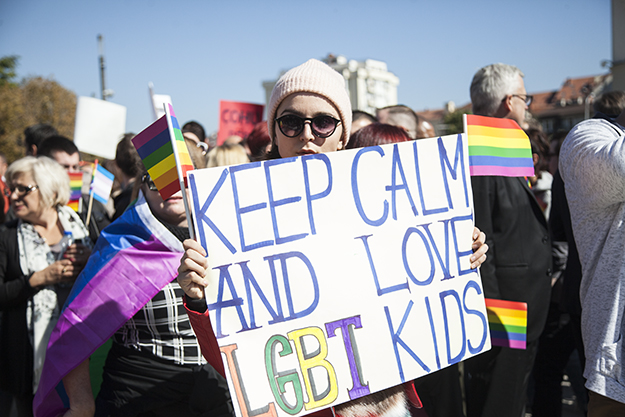 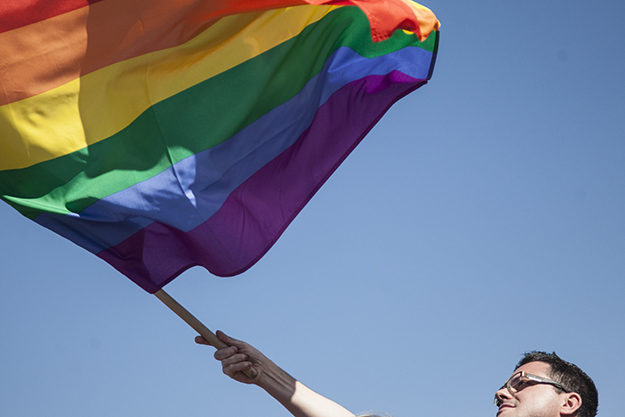 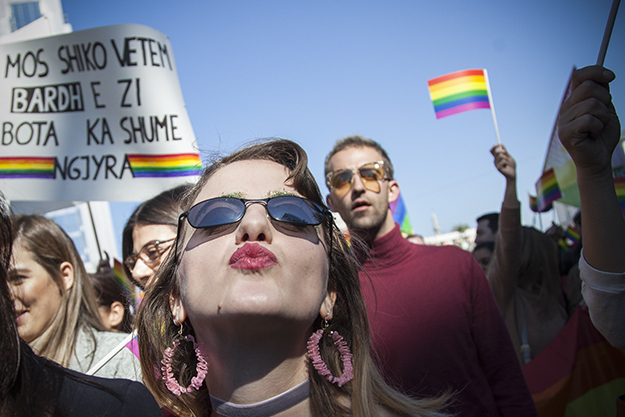 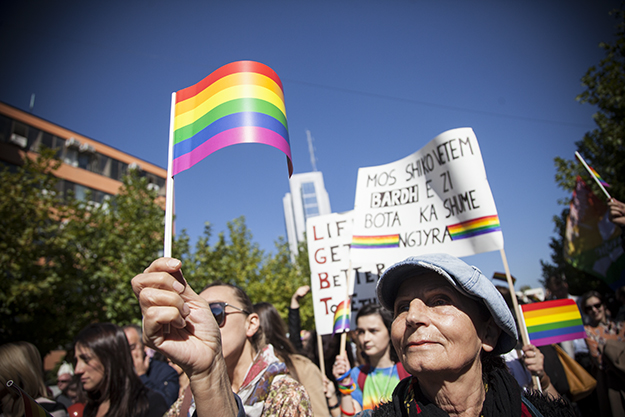 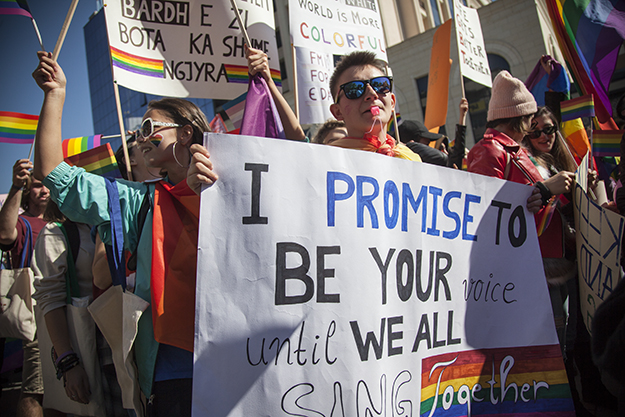 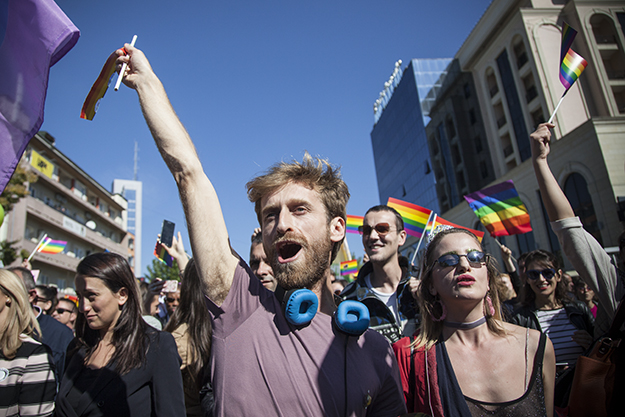 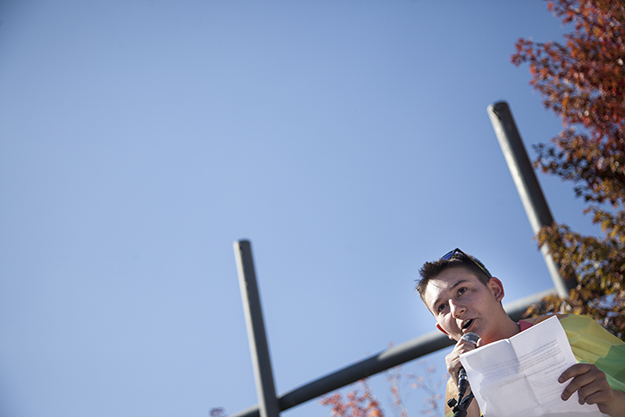 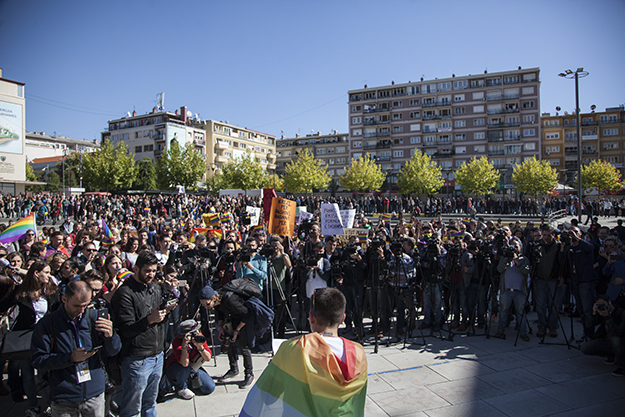 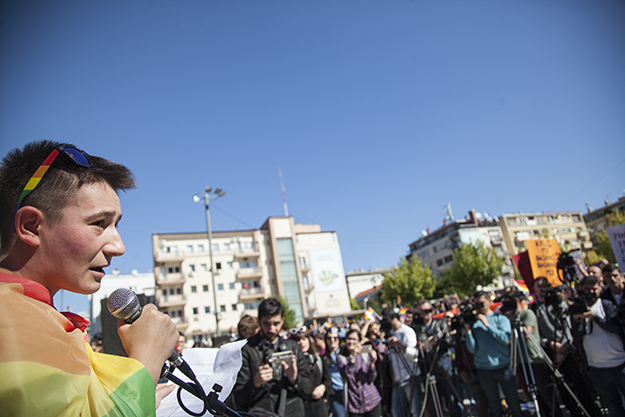 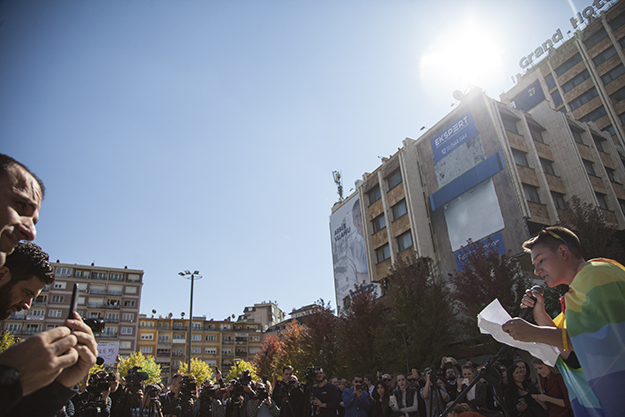 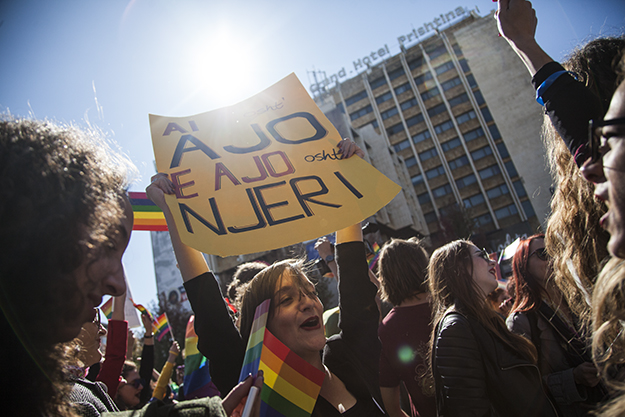 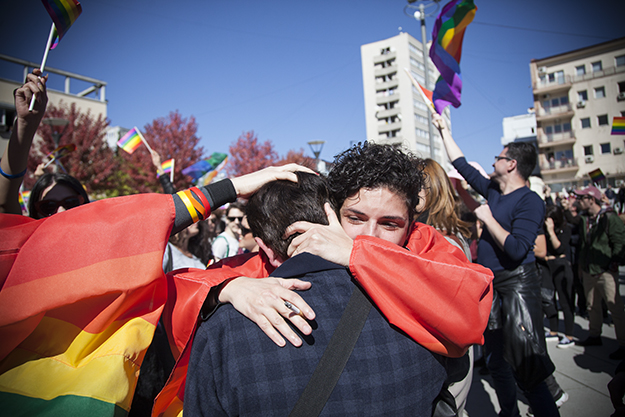 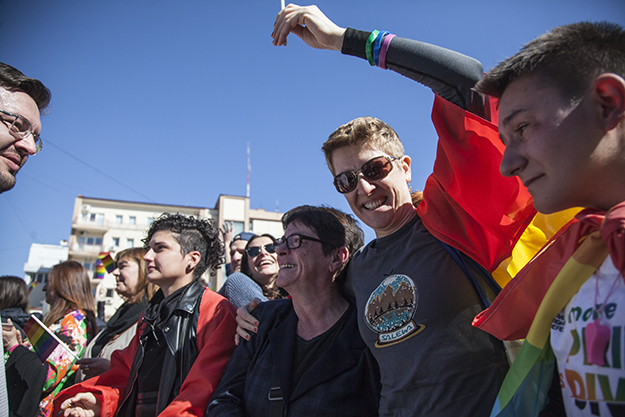 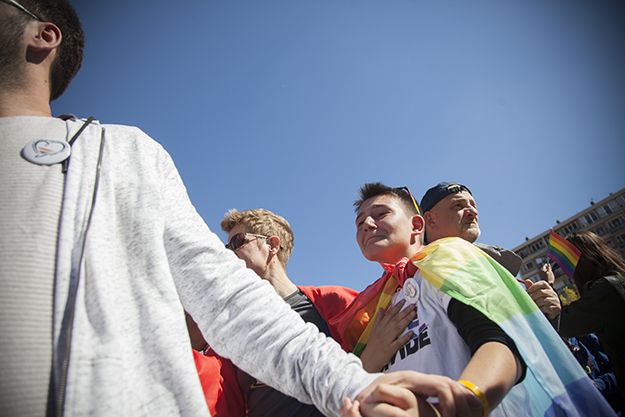 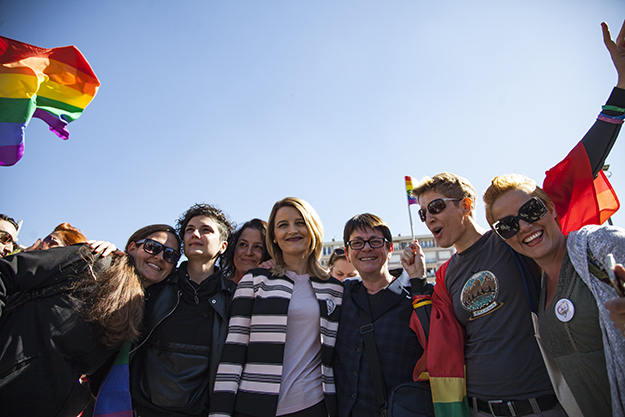 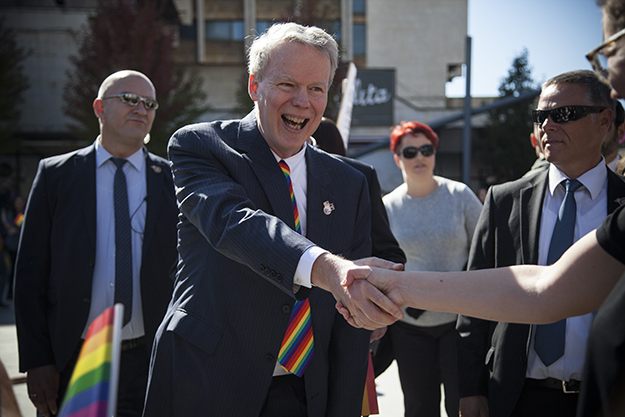 For Pelovski, participating in the parade is of crucial importance, in order to help people who are are still yet to come out. “I am here to share the experience with other people who didn’t come out because they are afraid,” he said. “I want to tell them ‘you will be safe, you will be fine’, and to show local people that there are different people from all [over the region]. It is very nice to have this experience, to come and share diversity.”

Stefan Sparavalo, (25) from Serbia’s LGBTI organization Let it be Known (Da Se Zna), is one of four LGBTI supporters from Belgrade that participated in the pride march. The cold relationship between Serbia and Kosovo added to his determination to be part of the event.

“I think it is not just for the improvement of LGBTI rights, but for further reducing the ethnic tensions, and for struggling for a more thorough peace and reconciliation between Serbs and Kosovars,” Sparavalo said. “I think it very important because Kosovo is a young state and it struggles with a lot of political and economic issues and the LGBTI community really suffers a lot from those tensions.” 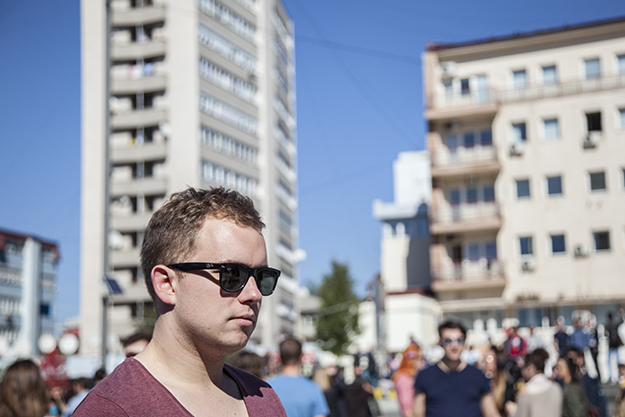 Stefan Sparavalo believes that the parade sends the message that LGBTI persons in the region will struggle for their rights. Photo: Majlinda Hoxha / K2.0.

As he works a lot with Kosovar activists, Sparavalo believes it is of great importance that young people in Western Balkans work together to create a region that prioritizes human rights issues, and eliminates discrimination based on ethnicity, religion, gender and sexual orientation.

“Pride is a day when LGBTI community can walk on the streets of Prishtina without having to fear they will be kicked or attacked because they are not in some sort of shell, as typical a man or typical woman,” he says. “I think it is really important to send a message to all of Kosovo that the LGBTI community here exists. It is a vital part of society and it is not [made up of] some kind of aliens. It is important [for the LGBTI community] to send a message to government officials and representatives, that we will struggle for our rights, that we are being attacked on a daily basis. [That] we want equality.”K

This article was written as part of the four (4) years project “Equal Rights for All Coalition (ERAC)”, which is an EU funded project managed by the European Union Office in Kosovo. ERAC brings together seven (7) NGOs that work in the domain of rule of law and fundamental rights that work together with an additional nineteen (19) grass root NGOs, with a particular focus on the establishment of a sustainable network of NGOs that are active in the protection and promotion of the fundamental rights of vulnerable and/or marginalised groups which are all minority communities, women, youth and LGBT community. ERAC members are the following organisations: · European Centre for Minority Issues Kosovo; · Centre for Social Group Development; · Centre for Equality and Liberty for the LGBT Community in Kosovo; · Kosovo Center for Gender Studies; · Youth Initiative for Human Rights; · Kosovo Glocal; · Centre for Legal Aid and Regional Development.

The contents of this article are the sole responsibility of the ERAC and can in no way be taken to reflect the views of European Union. For more information regarding the ERAC project activities, please visit ERAC webpage www.equalrightsforallcoalition.com or go to the facebook page Equal Rights for All Coalition.