Following in the footsteps of champions - Kosovo 2.0
Sports | Monograph

Following in the footsteps of champions

As the women’s national football team play their first competitive matches, they can take inspiration from two superstars of the European game.

When Fatmire Bajramaj left Kosovo at the age of 5, she trod a path that was at once familiar and yet so, so different to that experienced by many of her generation. Leaving Istog in haste was a sheer necessity for her family, who gathered up their belongings in the small hours of one morning back in 1993. Germany was where they put down roots, initially as refugees. It is a story she shares with so many others of her generation, footballers included, but what followed bears repeating over and over to generations of young girls in the land of her birth today.

In German colors, Fatmire became one of the greats; one of the best players that European women’s football has produced. She defied odds that, in most conceivable ways, seemed stacked insurmountably against her. In 2009, she published a book — “My Goal in Life: From Refugee to World Champion” — that sought to inspire others through her life story. 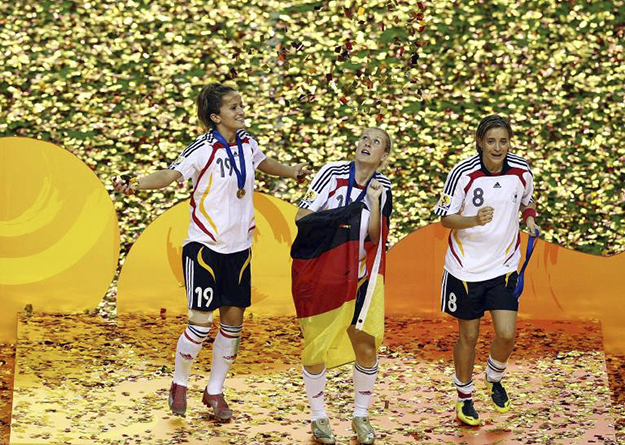 On February 28, Fatmire, now a mother and still relatively young at 28, announced her retirement from professional football. Her career had scaled every possible height — a World Cup medal, two European Championships, a Champions League, a UEFA Cup and an Olympic bronze medal to name just some — and set examples to so many. But, by 2013, Fatmire Bajramaj had become Fatmire Alushi, after marrying the Kosovo men’s international Enis Alushi. She gave birth to their son, who became a huge factor in decisions regarding her career, in November 2015.

“This decision is really hard for me because I would have really liked to play for a good club again,” Alushi said in her retirement message, posted on Instagram. “Unfortunately it wasn’t possible to find a city in which my husband Enis and me could have been able to actualize our private and sportive plans. That’s why I decided to completely take care of my family first.

“I really love being a mum,  and seeing our little son growing up day by day. Going on with my football career and the high amount of travelling combined with that, it wouldn’t have been possible to see him this often.”

The day after her retirement, another moment of history was made.

The football chapter of her life was closed now; it would have to be time for new heroes, new pioneers, new icons, and the timing could hardly have been more piquant.

Alushi never had the option of playing for Kosovo; it will have barely been a thought when, at the age of 19, she won the 2007 World Cup with Germany, playing a key role in the final and proceeding to win 79 caps as well as European Championship medals in 2009 and 2013.

There were no regrets about representing her adopted country during almost a decade at the top that saw honors, individual and collective, come thick and fast. The third place she won in the 2010 FIFA Ballon d’Or award speaks accurately of her standing, and in truth there is little to say she could not have exceeded that in the years to come.

The day after her retirement, another moment of history was made — a fresh milestone in what has been a formidable list over the past 12 months — when the Kosovo women’s national team played its first-ever fixture.

Poland won the game, played as part of a tournament in the Turkish city of Alanya, 5-0. The result, though, hardly mattered in context, and it was hard to ignore the element of symbolism behind what happened in that 24-hour spell. One era had ended; another, full of possibilities that had never come close to existing before, had begun for girls in Prishtina, Prizren and everywhere between. 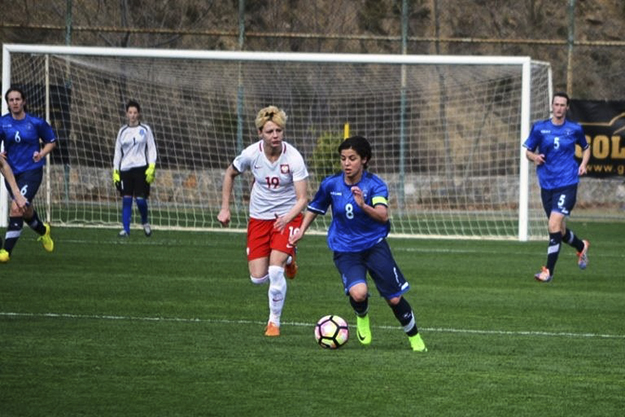 Qendresa Krasniqi brings the ball forward in Kosovo’s first ever match against Poland. Photo courtesy of the Football Federation of Kosovo.

On April 6, Kosovo will face Albania — it had to be Albania — in the first of their qualifiers for the 2019 Women’s World Cup. Few expect success of the kind Alushi experienced, not for some time at least, and it is as well to remember that the first women’s team in Kosovo was not registered until 1985.

Between 1989 and 1999, while their male counterparts played in dangerous, often secret, conditions, there is no record of any formal women’s fixtures taking place. A structured league did not start until 2011; if men’s football in Kosovo took a remarkable, emotional step in Turku last September, in many ways the strides made by the opposite sex — relative to some of their competitors — are even greater.

Yet some principles remain the same. While Kosovo’s aspiring male players have had role models in the form of estranged sons Xherdan Shaqiri, Granit Xhaka and Valon Behrami — all of whose international futures have prompted intense discussion but appear set in Switzerland’s colours — there remain standard bearers for the women’s game even if glimpses of Alushi, such a bewitching midfielder in her pomp, are now confined to highlights reels.

One of them already has a high international profile. “I’m very proud to play for Sweden and I have Kosovo in my heart too. My whole family is from Kosovo, so this medal will be for both Sweden and Kosovo. Both are in my heart.” Those were the words of Kosovare Asllani, the Swedish international, upon being guaranteed a silver medal at last year’s Olympic games in Rio de Janeiro. 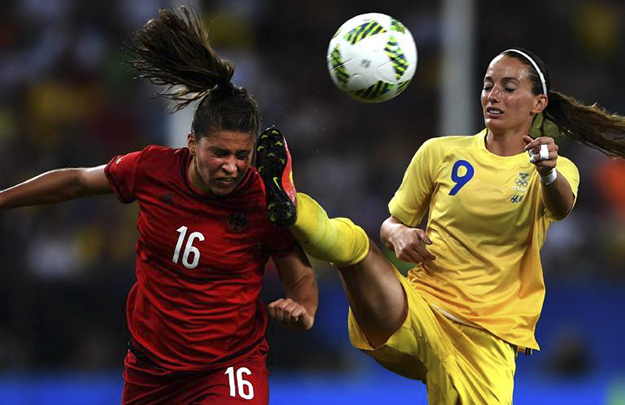 Asllani is, like Shaqiri and company, an England-based star; she joined Manchester City, the current Women’s Super League champions, in 2016 after four years at Paris Saint-Germain — the final two of which were spent dovetailing with the mesmerising talent of Alushi. Her first few months in the English city saw her help the team to a league and cup “double”; she is, like Alushi, a winner and will not settle for second-best.

To some, she is also the women’s game’s equivalent of Zlatan Ibrahimovic and it is not hard to see why: The dark features and Balkan heritage combined with a metronomic ability to find the net, make the comparison straightforward. Like Ibrahimovic, she was born in Sweden to immigrant parents; like Ibrahimovic, the 27-year-old has been Sweden’s attacking talisman for a number of years; like Ibrahimovic, she shone at Paris Saint-Germain before seeking a new challenge in Manchester.

“I always fought for all the girls of foreign origin in Sweden,” she told Fifa.com last year. “They lit the fire in my heart when things were difficult for me. They made me want to do much more. They’ll see me fulfil one of my dreams and here’s hoping that they will understand that they can do it too, if they put in the effort.”

They are words that sum up the struggle many who have left Kosovo to forge lives abroad can identify with. Figures like Asllani, who also played in the United States with Chicago Red Stars, show what can be done and arguably hold more importance than the likes of Shaqiri and Xhaka: They represent the struggles of a gender as well as of a nationality.

"The team is improving and that gives us hope for the future.”

The challenge now, on a sporting level, is for that influence to filter down into the sportspeople Kosovo produces locally. UEFA has supported Kosovo with the drafting of a development strategy for women’s football over the next four years.

Infrastructure is the key for a nation that has athletic prowess in its genes, and when a delegation from European football’s governing body visited Prishtina in November it pledged its assistance in a variety of different ways — including the marketing of a sport that has too often seemed peripheral and inaccessible to young girls both in Kosovo and elsewhere. Efforts to create an Under-16 league constitute a positive step, with clear pathways important in nurturing the Kosovar internationals of tomorrow.

Those of today are already testing their credentials. “The reason they won was because they had experience,” said Kosovo player Blerina Musa after the team’s second match in Alanya, a 3-0 defeat to Romania that brought a number of positives despite the scoreline. “In the second half we created chances but not the finish. The team is improving and that gives us hope for the future.”

Her coach, Aferdita Fazlija, pointed out that “physical preparation and experience” were the differences between the sides but said there was “real potential present” in her squad. It is a refrain that echoes the early experiences of Kosovo’s men, whose first performances in their own World Cup qualifiers have been full of attacking verve but, at times, short on the nous needed to thrive at the top level.

That will surely come and those World Cup clashes will be instructive, not least in how the side approach challenges that will be very different in tone. The first game will see Kosovo come up against a familiar foe. Five of Albania’s squad play for Hajvalia, the Kosovar champions, and many of them have roots from across the border. The Albania match presents an exercise in how to handle the emotion of a local derby and the pressure that comes with it; subsequent fixtures against Greece and Malta may prove a more orthodox exercise but everything is, at this stage, a learning curve that will have its jagged patches along the way.

It is, though, a curve guided by the paths of those who have succeeded before. When Alushi left Istog on that traumatic morning 24 years ago, driving out of the country with her family before embarking upon a dangerous and exhausting four-day trek into Germany, she could hardly have imagined the life that would follow and the rewards it would bring. The journey undertaken by women’s football in Kosovo will be altogether less severe, even if it takes longer; the advantage Kosovo’s players of today hold is that, in Alushi and Asllani, they could not have had better role models.K

Back to Monograph on Sports