Sexual assault and harassment at the University of Prishtina in focus.

Today (April 5), the Rectorate’s entrance at the University of Prishtina witnessed another protest over the failure to address sexual harassment within the university.

It was the second demonstration within eight days, and saw activists from student and other organizations demanding the inclusion of sexual harassment in the Ethical Code for Academic Staff, and the creation of an Investigative Commission to investigate allegations of sexual harassment. Activists are also calling for a public apology from the university for all cases of sexual harassment that haven’t received any kind of institutional response.

“Educational institution with sexist intellectuals,” “How was my assaulter dressed?” and “The behavior code is the solution, not the dress code,” read some of the placards held by protestors.

While public discussions on sexual harassment gained momentum in Kosovo in 2014 with the Take Back the Night campaign, it is only in recent days that public debate has focussed on the University of Prishtina. Discussions on the university’s failure to address sexual harassment and the lack of institutional accountability was partly triggered by comments made by Prorector Teuta Pustina-Krasniqi during a documentary made and broadcast by the T7 TV channel.

“I have a message for the female sex — students, academic and administrative staff,” Pustina-Krasniqi was recorded saying in the documentary. “I appeal to them to not be provocative, to not dress in a provocative way, because it has a psychological effect and can negatively impact the environment where students are having lectures. Regardless of physical appearance, sexual harassment is never justified but I call on young women to not forget that they are part of a serious institution and need to respect the dress code.”

Pustina-Krasniqi’s comments outraged activists who perceived it as a continuation of an overpresent culture of sexism at the university, which they say blames the victim in cases of harassment and assault. In 2014, “Kriminalistika,” a law textbook, was removed from university classrooms following a campaign, as it included a paragraph that trivialized sexual harassment and assault, while blaming the victim.

Following last week’s protest, which called for Pustina-Krasniqi’s dismissal, the University’s Steering Council dismissed the now former prorector from her managerial position and distanced themselves from her statement. Pustina-Krasniqi later released a statement to the media, claiming that her comments were taken out of context and that she was referring to both female and male students regarding the dress code. 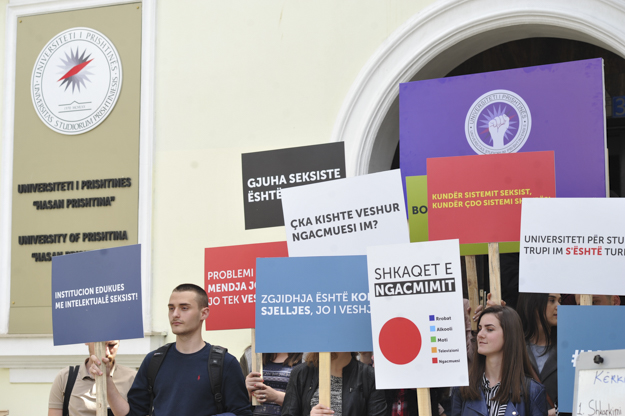 As the university’s Ethical Code for Academic Staff doesn’t once mention sexual harassment, activists have now highlighted the importance of its inclusion and the creation of mechanisms that would address sexual harassment.

Currently there isn’t a commission, body or office that deals with the handling of sexual harassment cases. On Monday (April 2), K2.0 contacted Ardiana Bunjaku, the head of the Steering Council at the University of Prishtina, the body that oversees the university’s affairs, for an interview, but Bunjaku said that she didn’t have time to comment until Friday. K2.0 also contacted Bunjaku’s deputy, Laura Kryeziu, who explained that the Council “are in the process of undertaking some concrete steps for reviewing and creating mechanisms to address and prevent sexual harassment at the University of Prishtina.”

"If the University of Prishtina creates a mechanism, we believe that we will see an increase in reports.”

Yesterday (April 4), the Steering Council released a statement indicating that they are planning to organize a working group with the aim of creating mechanisms to deal with sexual harassment at the university.

For Venera Çoçaj from the Organization for Increasing Quality in Education (ORCA) NGO, one of the organizations behind the demonstrations, the creation of mechanisms are crucial in paving the way to reporting sexual harassment and bringing perpetrators to justice.

“We think that there needs to be a special mechanism that addresses sexual harassment, taking into consideration that cases often aren’t reported because there is a lack of trust in institutions,” Çoçaj says. “It would provide the possibility to report, so it needs to be a safe space, to be discreet, and provide anonymity and confidentiality. If the University of Prishtina creates a mechanism, we believe that we will see an increase in reports.”

According to Çoçaj, the dismissal of Krasniqi-Pustina was of a great importance as it demonstrates that the university is willing to act not just in treating sexual harassment cases, but also on discriminative gender policies. “We live in a victim blaming society, which was confirmed by the prorector’s stance, and that of others who came to support such declarations,” Çoçaj says. “This is where we can change course.”

The discussion on the University of Prishtina’s systematic neglect of sexual harassment within its walls came under particular scrutiny through activist Jeta Berisha talking publicly about her experience of being sexually harassed while a student at the Faculty of Arts.

At last week’s demonstrations she took a microphone and revealed the details of her story to those gathered. Berisha stated that she was asked by an arts professor to take a DVD to his office, where, after locking the door, the professor groped her from behind. She went on to say that she then pushed him, shouted at him and ran out of the office, terrified.

Berisha also detailed her attempts to report the incident, revealing that she immediately notified other professors and the dean of the Faculty of Arts, who she alleged advised her not to talk about what had happened. Berisha also stated that she filed a complaint to the Dean’s Office and the Rectorate but never got a reply, and that she went to the police, whom she claimed never followed up on her case.

Contacted by KohaVision, Agim Selimi, the dean of the Faculty of Arts, said that he “never received a letter from the mentioned student,” while police officials said that they are in the process of verifying the data before giving an official answer. Meanwhile, the University of Prishtina’s rector, Marjan Dema, wrote in a press release that he is “concerned over the sexual assault allegations” and “will act according to needs.”

K2.0 wrote an official email to Dema on Monday, asking for the management’s stance regarding allegations of sexual harassment, whether there are any plans to create reporting mechanisms, and the number of sexual harassment cases reported to the rector. We received no reply. 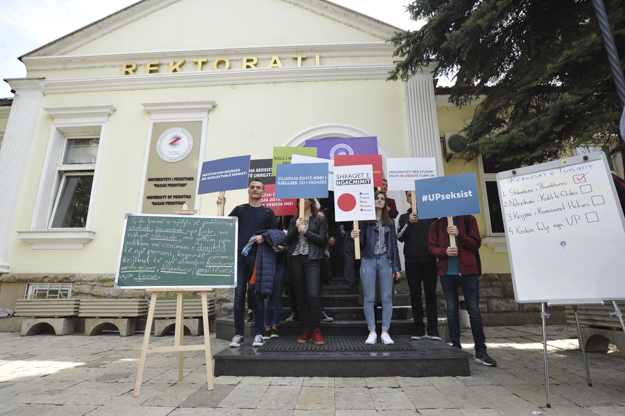 “It was a bitter and very disappointing experience for me, because I never thought that something like that could happen at a serious institution,” says Berisha, who claims that the experience led her to quit the university. “We had that comfort to be open with professors, as communication isn’t that official at the Faculty of Arts, but everybody needs to have limits. It was painful to report the case and not find any support.”

“I hope that more women and girls who want to report sexual harassment cases will contact me, because for women, the personal is always political.”

Berisha says that she joined the protests and shared her story in order to encourage other students to talk publicly about experiences of sexual harassment and assault, and to not bear injustices. She has revealed that other women have written to her about their own experiences, including other allegations pointing to the same professor that she alleges attacked her.

“I hope that more women and girls who want to report sexual harassment cases will contact me, because for women, the personal is always political,” Berisha says. “Historically, women have been oppressed and we need to escape from this discourse and show the world that women have a voice and it needs to be heard.”

Berisha is one of very few people that has talked publicly not just about being sexually harassed but also about reporting it.

Çoçaj asserts that Berisha’s story is a typical example of a journey faced with a lack of an institutional response at every stage. “There has been institutional failings from the University, the Faculty, the police and so on,” she says.

K2.0 contacted the Kosovo Police communication office for more information and data on sexual harassment reported to the police. The police informed K2.0 that they have received only one report of sexual harassment involving the University of Prishtina, made in 2016. The case was proceeded to the prosecution. 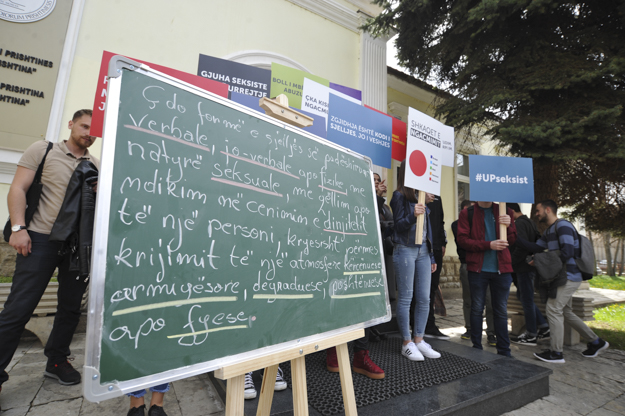 Artpolis’ executive director, Zana Hoxha Krasniqi, says that, based on interviews with students, there are a considerable number of professors that lock the door during one-to-one sessions. Like Çoçaj, she feels that a dedicated mechanism can help address the issue of sexual harassment.

Krasniqi argues that sexual harassment is deeply rooted in Kosovo’s universities, and the lack of accountability makes it even more widespread. She adds that one of the reasons Artpolis participated in the protests is the tendency to tell young people over 18 how they should dress.

“We asked for this issue to not become moralized because you cannot abuse laws and codes that do not exist,” Krasniqi says, adding that Artpolis invited professors at the University of Prishtina to participate in a series of 10 workshops on sexual harassment before the launch of the organization’s report last year, but that only one professor attended one of the 10 sessions.

Professors in the dock

Berisha says that she is in discussions with her lawyer regarding publishing the name of her alleged attacker. “The reason we didn’t publish the name is because of legal issues, which can hamper the investigation, but it is just matter of time,” she explains.

While the Kosovo Criminal Code offers a general definition of harassment, citing that the perpetrator shall be punished by imprisonment of six months to five years, it doesn’t specify concretely what constitutes sexual harassment.

Hoxha Krasniqi highlights that any cases of a dismissal from the University of Prishtina, or even a criminal conviction, would become an example of accountability, but dismissals due to allegations of sexual harassment are yet to happen at Kosovo’s universities. 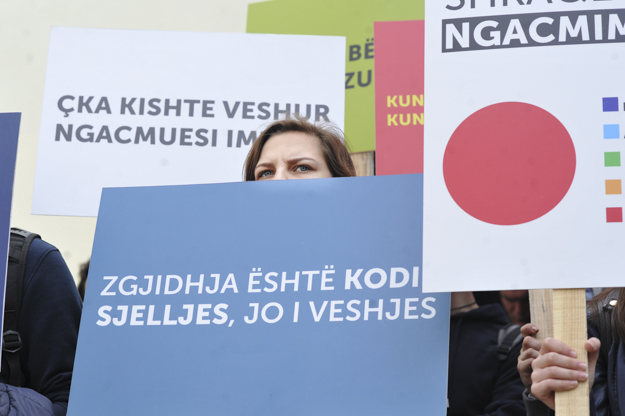 While no university staff member has yet lost their job as a result of sexual harassment allegations, in recent years, two famous cases have resulted in the suspension of two alleged perpetrators, with both professors facing court indictments.

In 2016, Rexhep Osmani, the former minister of education and professor at the University of Prishtina’s Faculty of Education, was reported to the police by one of his students, who claimed that Osmani “asked for sexual favours in exchange of a grade.” Osmani denied the charges but admitted to having hugged the student, which according to him was misunderstood.

According to T7’s documentary on sexual harassment, Osmani was indicted last year on the suspicion that he had committed the criminal act ‘of abusing his or her control and position.’ He is yet to appear in court.

The same charges were also made against Bashkim Zahiti, a professor at the Ukshin Hoti University of Prizren, who was suspended over allegations of sexual harassment. It has been reported that the prosecution has evidence containing recordings where he is heard asking for sexual favors in exchange for grades. Zahiti is also yet to appear in court, as the opening session has been indefinitely postponed as a result of reported health issues.

When K2.0 contacted the rector at the University of Prishtina, Marjan Dema, we also enquired about any suspensions or dismissals as a result of sexual harassment at the university since he became rector, but received no response.K

*Update: This article was amended on April 6, 2018 to include the response of Kosovo Police.