I suffer therefore I am — we must stop animal cruelty in Kosovo - Kosovo 2.0
Perspectives | Activism

Just like marginalized people, animals have their voices silenced and are disempowered.

In my work as a lecturer and researcher I am interested in social injustice. I focus especially on issues around marginalized humans, but also animals, and particularly dogs. My work combines several academic perspectives in order to outline how identity, power, dominance, othering and discrimination are used to justify the suffering of both humans and animals. My aim is to raise questions around power and whose ‘voice’ or experience takes priority. The issue for me is not one of whether animals can speak or not, but one of pain and power, and who holds that power to decide the fate and welfare of marginalized and discriminated humans and animals.

In 1997, Jacques Derrida, the French postmodern post-structuralist philosopher, addressed the Crisy conference in a 10 hour lecture, later published in 2006 as a book entitled “The Animal That Therefore I Am.” In his address, Derrida questions the famous Cartesian proposition ‘I think, therefore I am,’ which has for centuries defined the subject or the ‘human’ in Western philosophy. Derrida’s argument centers on constructions of the human and animal (or nonhuman) and brings into question how we construct both. However, what we begin to understand through questioning these relations is not capacity for thought or thinking, but capacity for suffering and feeling pain. So the question should not be, ‘Can animals or dogs think?’ but, ‘Can animals feel pain and suffer?’

"I have seen countless suffering animals, especially dogs all over the streets of Kosovo and not one person fined or convicted of cruelty."

In my opinion and experience, animals, especially dogs, are not only sentient but also extremely well equipped with language and communication skills, that at times exceed most human abilities. My three dogs are able to communicate and notice even the slightest changes in human behavior, at times much faster than any human I have ever encountered. In fact, in my home we have to spell words instead of saying them out loud as our dogs, Jack, Ollie and Daisy are very quick to communicate their desires in relation to words such as ‘walk’ or ‘food’ and many more. Furthermore, they are able to understand sentences such as, ‘Do you want to go to the park for a walk?’ and, ‘I will make your food now’ and even know the difference between ‘food’ and the question, ‘Are you hungry?’ to which they usually reply by getting up and going to the kitchen to wait for their food or urging me to hurry up by putting their paw on my lap.

Thankfully, Jack, Ollie and Daisy live in the UK with my partner and me, and we even bought a house with a garden just for them, otherwise we wouldn’t have bothered. There is nothing like having a dog, a being that requires you to care for them, to push you to do and achieve things that you normally would not have thought possible. I often tell them stories of the dogs in Kosovo, who suffer, even despite some great laws there that are supposed to protect all animals, including dogs.

The law in Kosovo is clear in setting out the responsibilities we have towards animals, including feeding and sheltering animals, but also medicating and not abusing or harming animals. The law also states that anyone who abuses animals either through neglecting their basic food and water needs, or by harming, torturing or killing animals is subject to a fine of between 100 and 5,000 euros.

Yet, I have seen countless suffering animals, especially dogs all over the streets of Kosovo and not one person fined or convicted of cruelty. A part of me thinks that some are not aware of the fines they can issue, because they would be quick to fill the coffers of their municipalities.

Dogs in Kosovo suffer from malnutrition, disease and injury. They are subjected to abusive treatment and inhumane methods of killing such as shooting (see the petition I started with over 1,400 signatures yet no response from the Mayor of Prishtina, Shpend Ahmeti), poisoning and drowning. Cruel methods of catching are used, before the dogs are placed in poorly equipped and managed holding facilities or so called ‘shelters.’ Anyone brave enough should take a trip to the so-called ‘shelter’ in Gracanica to see the extent of the pain and suffering present there.

Yet, no inspectors have been sent there and no one is held accountable or fined for inflicting such pain and suffering. Similarly, throughout the streets of Kosovo we see street dogs and cats suffering; hungry, and abused by both children and adults, who throw rocks at them, or worse. Despite the fact that humans domesticated dogs and we created this ‘problem,’ they are the ones that bear the punishment and cruelty of our actions.

"When we normalize cruelty ... we are implicit in this abuse of the most vulnerable in our society, both human and animal."

When I speak out against this cruelty, some concerned citizens in Kosovo suggest that the dogs are aggressive. I cannot dispute that some may be aggressive, but what I can guarantee is that any aggression that a dog shows is due to human behavior.

We know that dogs that have experienced abuse will either become very submissive, fearful or probably die if they end up on the streets, or they will become aggressive. So given the science, why do we continue to blame them? We continue to blame them because they have no recognized voice, similarly to marginalized and disempowered people.

For example, a couple of years ago we heard the media reports of dogs attacking a child. However, what all the reports failed to mention was that the child was rummaging through bins for food, the same place the dogs obtained their food from, so the dog starving and hungry attacked the child because it was protecting its food source. The media in Kosovo did not report this, nor did they report that the child was seeking food in bins. Both were engaged in instinctual behavior driven by hunger and suffering, and both had no voice.

This brings me to the sentence that I hear most often from Kosovars. ‘We have starving people, how can we help dogs when people are starving?’ Well, I would argue that when we normalize cruelty, either by directly inflicting pain, or by inaction which normalizes suffering and creates ‘compassion fatigue,’ we are implicit in this abuse of the most vulnerable in our society, both human and animal. Furthermore, the situation will continue to not only remain the same but get worse and you will never be able to feed or help either.

Humans, to a degree, have some agency, but not when they have been disempowered. This situation is even worse for animals, like the street dogs of Kosovo. They will continue to be in pain and suffer in silence and society will continue to have the same problems because of this inequality towards those less powerful, who have their voice silenced.

The picture below is of a dog that lost his brother and refused to leave his side, if this is not an ability to speak, think and feel, I don’t really know what is. So I ask you to listen to this suffering, not only for the sake of animals and dogs in Kosovo, but for the sake of our society and humanity. 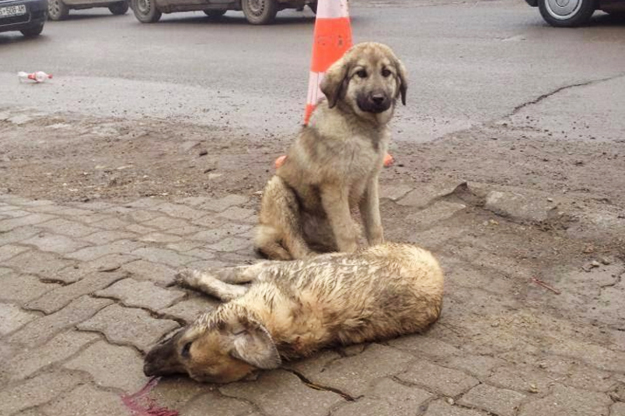 Author’s note: The payment for this article, along with a matched personal payment, has been distributed and donated to Kosovo Pet Rescue, Rescue Angels Kosova and Te Bashkuar Per Kafshet volunteers for feeding dogs in the Gracanica shelter.