Political reality tends not to care about life plans of individuals. And so, as I was writing up a report from a student conference in Ljubljana on April 3, a comrade hit me up on Facebook asking, “Are you going to the protest?”

I had heard something about a protest being organized, but being a bit out of the loop in the week leading up to the presidential elections (which were held on April 2), I figured it was a reaction protest by the badly beaten opposition candidates who, despite their best, and to an extent combined efforts, failed to mobilize a significant voter turnout for the traditionally relatively well attended presidential elections in Serbia. 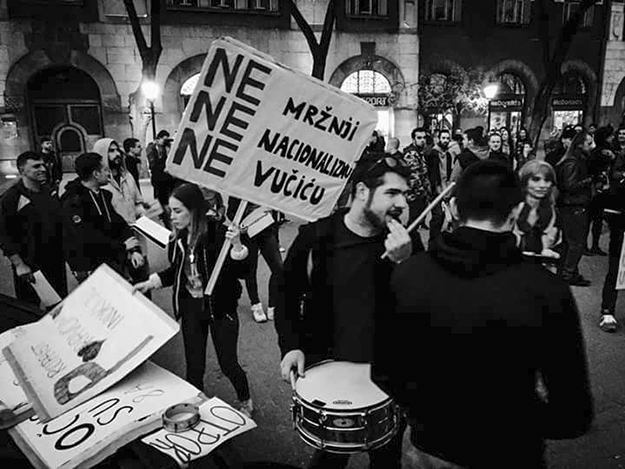 Aleksandar Vucic, the prime minister, secured a first round win with something north of 50 percent of the vote. This is now being contested due to the fact that the legal deadline for announcing official election results based on the complete count of the votes expired on April 7, as well as the fact that around 800,000 more adults exist on the voter lists than in reality.

However, the opposition candidates, save a single young comedian parodying the entire political process in Serbia, failed to deliver any type of alternative politics to Vucic’s neoliberal servitude to the West (with a healthy dose of sucking up to Russia and banging his Balkan war drum, should he feel the need to supplement his support by reviving the still wailing ghosts of recent nationalist conflicts — the train fiasco comes to mind).

And so, with still fresh memories of a protest after last year’s snap parliamentary elections, organized in such a way that it brought together the entire oppositional political mainstream — from the splintered former ruling party Demokratska Stranka (DS), to the reformed proto-fascists of Dveri, a right-wing political movement — who combining their forces, failed to mobilize more than 2,000 people, and assuming that what was going on in the streets of Belgrade was a similar waste of energy, I decided to stay in and type up the aforementioned report. 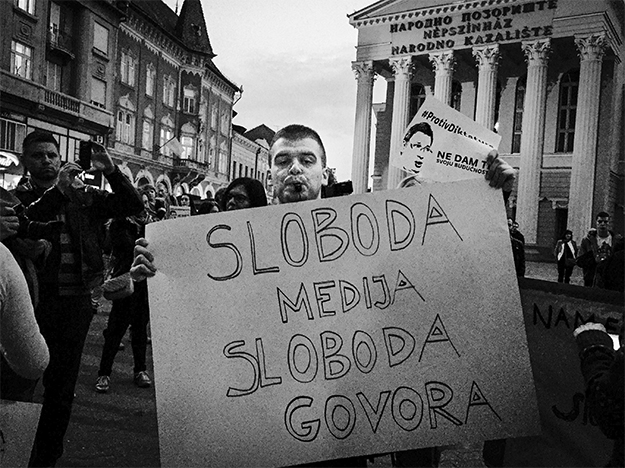 Later in the evening the same comrade sent me several messages praising the atmosphere and the apparent self-organized character of the protest. Upon receiving similar comments from various other sources (which tended not to include mainstream media, which has so far either ignored or lambasted the protests), I came to the conclusion that sitting this one out was a mistake, and a concession to personal cynicism which would have to be remedied.

The second day (April 3) saw the minuscule Serbian radical left in a state of feverish anticipation and Facebook was alight with comments. Even though a section of it — including Marks21, the organization of which I am a member — did got a relatively recent opportunity to cut its teeth in mass protests, that have been absent from Serbia for 16 long years, in the Ne da(vi)mo Beograd initiative, one couldn’t help but notice a significant difference between those protests.

I don't think it would be a stretch to claim that the majority of the people are protesting against the systematic hopelessness and structural problems that they are facing.

The first difference is the absence, and the ultimate confusion around the issue, of demands being set forward by the mushrooming movement (April 4 witnessed similar protests in 18 other cities — an unparalleled event in 21st century Serbia). Some news outlets report a list of demands being put forward by “the students of Belgrade and Novi Sad universities.”

However, this list has been contested and broadened by Studentski pokret Novi Sad, a left-wing student organization that organized the very successful mobilizations in Serbia’s second largest city. As Belgrade protests are still lacking formal — and really, uncontested informal — leadership, it remains a mystery as to who coordinated the list of demands. 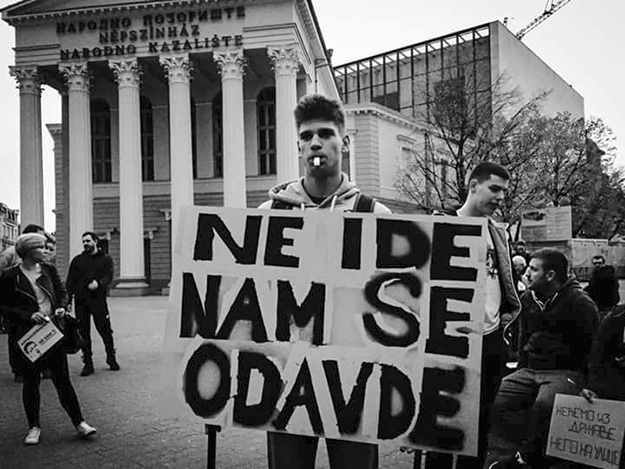 Be that as it may, one doesn’t get the feeling of a clear political purpose when marching in the streets of Belgrade among thousands of mainly young, urban people. I don’t think it would be a stretch to claim that the majority of the people are protesting against the systematic hopelessness and structural problems that they are facing, and that the alleged (and very probably existent) election fraud served mainly as a trigger to mass mobilization.

I would also go out on a limb and say that I have a strong feeling that some of the almost 50 percent of voters who abstained in the recent elections make up a disproportionately large number of the masses in the streets.

The youth are not interested in the calls for resignations of this or that political functionary —  they are interpreting the reality of the protest as a possibility to express their own political (even though many would shy away from that particular adjective) and social aspirations and to topple a frustratingly authoritarian ruler. Some would venture so far as to call Vucic’s rule a dictatorship, but it is my belief that certain concepts shouldn’t be trivialized.

It is still far too early to make any sort of predictions about the further development of this mass protest.

An aspect of the widespread fear of politics has proven to be somewhat problematic. The informality of the protests has opened up room for gangs of far-right thugs to try to hijack them. Well coordinated and well organized groups of a couple of dozen relatively well known nationalists have tried to use the myth of a Soros conspiracy as justification for their “protection” of the protests, and have for two days had free rein to give the protests a rightish flavoring.

This is much to the dissatisfaction of a mass of participants who expressed their frustration over such a development and who self-organized alongside progressive activists in order to challenge the right wing takeover. As a protest is currently underway, I am thrilled to be able to write that I have just received word that the right have been forced to retreat from the front of the protest chased away by the chants of “We don’t want no leaders!” 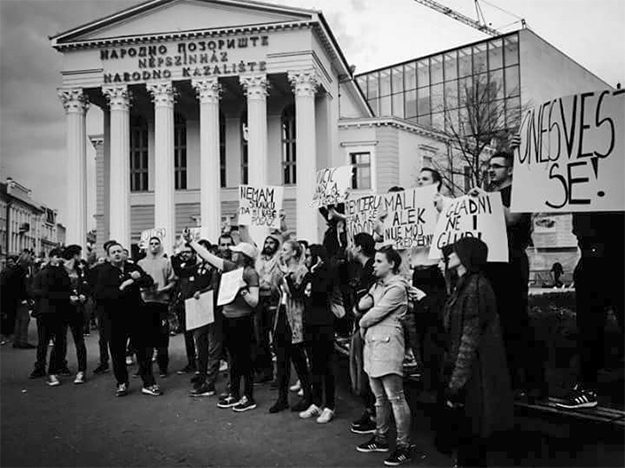 It is still far too early to make any sort of predictions about the further development of this mass protest. Should the tens of thousands of people on the streets wish to utilize the momentum to its full potential, a much higher level of organization will have to be achieved. However, we should try to make sure that this organization doesn’t come at the cost of losing the wide appeal of the protest and that it is used to further an agenda of real challenge to the neoliberal, austerity rule of the local power elites and their international benefactors.

I’d like to bring this short report to a close by referring to that age old orientalist trope about the Balkans being a powder keg: Yeah, we are a powder keg of rage and frustration, and we will do our best to direct our fire towards our rulers rather than our neighbors; towards our international oppressors rather than towards the minorities facing all of the hardships we do and then some more; towards an unjust and inhumane system and not towards the refugees passing over our lands to a glimmer of a hope for a better future.

Featured image: Natalija Jakovljevic Ivanic. (All images from the protests in Subotica).