The Shkodran artist featured in Manifesta 14 talks about his work.

On the ninth floor of the Grand Hotel, there is a room where the only light comes from three large screens that hang next to each other. The video installation, by Shkodran artist Lek M. Gjeloshi, is titled “In the Visoki Dečani Crucifixion fresco there are no UFOs.” The installation is part of the exhibition “The Grand Scheme of Things,” part of the 14th edition of the European Nomadic Biennale, Manifesta, which is being held in Prishtina until the end of October.

In the background, accompanied by cosmic sounds, the approximately ten-minute video appears to show images of galaxies. It takes you on a journey into the mystery surrounding two symbols from a 14th-century fresco found in the Serbian Orthodox Dečani Monastery, which for two decades has been involved in legal battles with Kosovo’s institutions regarding land rights.

The fresco depicts the crucifixion of Christ and contains two symbols, which art historians consider to represent the sun and moon. Some conspiracies claim the symbols testify to the existence of aliens and UFOs.

The moon symbol makes an appearance in Gjeloshi’s video installation. Although it seems as if nothing is happening in the video, the moon slowly moves across onto the final screen, like a cosmic body, and then disappears. 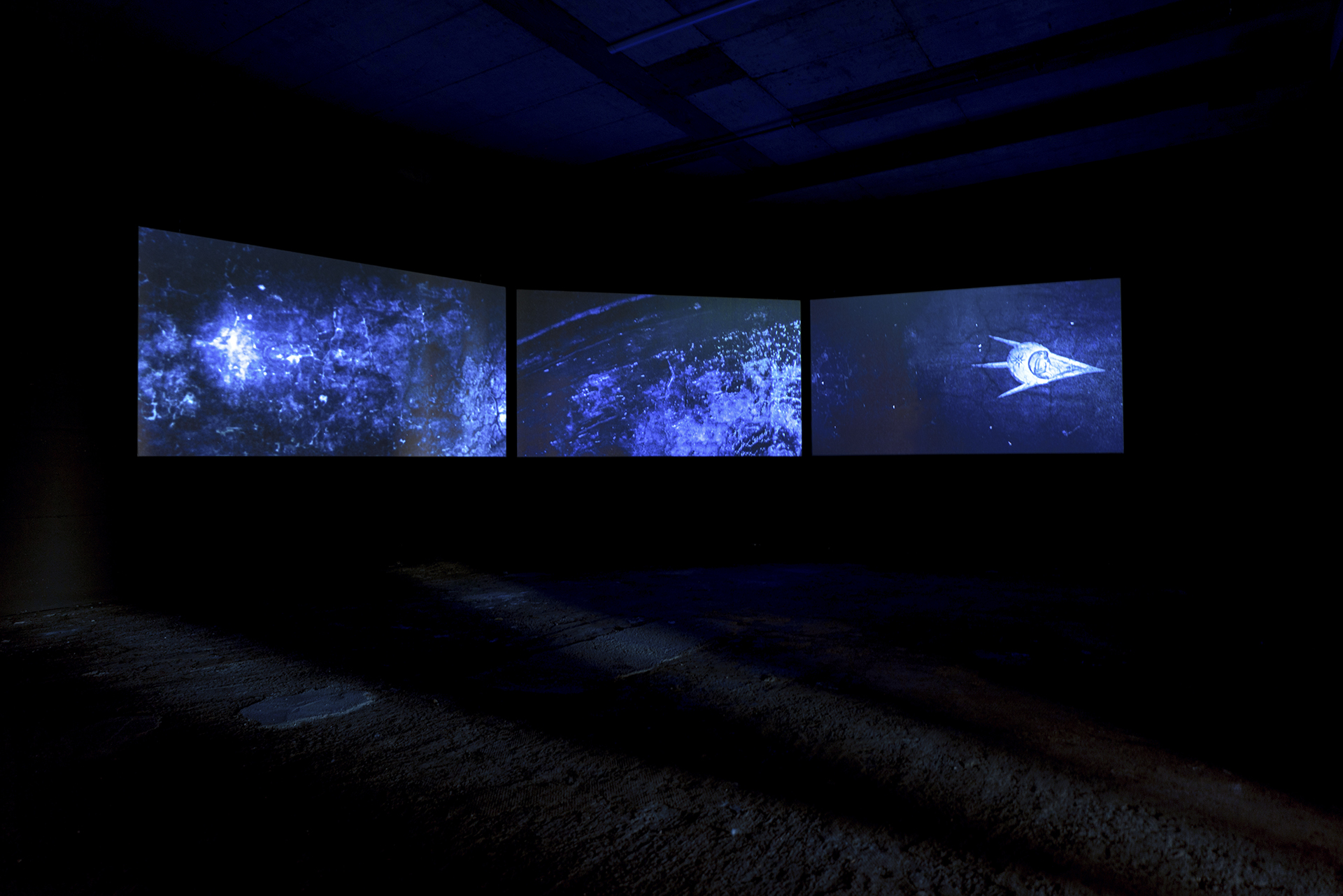 Lek M. Gjeloshi is exhibiting his video installation on the ninth floor of the Grand Hotel, as part of the 14th edition of the Manifesta biennial. Photo: Esad Duraki.

“I liked the almost futuristic moment that the subject evoked as a celestial body. There was a kind of intrigue, which prompted me to create something with it,” said Gjeloshi, while explaining his preoccupation with the symbol from the fresco.

After graduating in Visual Art from the Academy of Fine Arts of Florence, Gjeloshi was awarded the 2016 Ardhje Award for young visual artists in Albania by the Tirana Institute for Contemporary Art. His work has been presented in several solo exhibitions in Albania, Kosovo, Italy and France, among other countries.

K2.0 spoke with Gjeloshi about the video installation at Manifesta, his solo exhibitions and UFOs.

K2.0: Your video installation is inspired by two symbols in a fresco at the Dečani Monastery, created by an unknown artist in the 14th century. Where did this preoccupation with the fresco begin?

Lek M. Gjeloshi: I was curious about the fantasies that the figure evoked, which looked like a rocket, like a comet, and like a space capsule holding an astronaut inside. I liked the almost futuristic moment that the subject itself evoked as a celestial body, but also the fact that it came from a time distant from us. We are talking about the 14th century. In general, elements or subjects with science-fiction characteristics are projected into the future; in my case, this presence is projected into the past. There was a kind of intrigue that prompted me to create something with it.

I have only worked with one of the two symbols, the so-called moon. These two symbols became very popular in the 1960s. Firstly, from a Yugoslavian magazine called Lumière, where photographs of these two strange fresco subjects were published for the first time. Then, a few years later, through a cultural magazine from the Soviet Union, called Sputnik. From there, conspiracy theories began to flood in, according to which these figures are undeniable proof of the existence of aliens. The narrative about them began to take this direction: they are astronauts and aliens, who have come from another galaxy to visit us.

Actually, everything is happening at the scene of Christ’s death on the cross. This is important to note, because in depictions from that period, the scenes generally had the sun on one side and the moon on the other. For art historians, the two figures are the sun and the moon. For scientists and other researchers, they are aliens, or UFOs.

In this limbo of theories, perceptions, explanations, I started to build my work for Manifesta. Although in Deçan you can still feel that the town’s spirit is somewhat tense and isolated. There is still a KFOR checkpoint and photography is not allowed in the Monastery. Therefore, I had to invent a form of work without being directly present there.

In the video, only one of the two symbols found in the fresco is shown. Why did you choose the moon?

The moon seems to me a more specific presence, as the figure looks back on itself. It appears at a certain moment for us. Its movement is slow. We are often oriented by its light at night, although it receives its light from the sun. It has always seemed to me a concrete presence, though still distant and ethereal, that mediates our need to understand something beyond the planet we inhabit. In all directions, the moon remains for me a melancholic presence — different from the sun, more prosaic and brutal in its majesty. 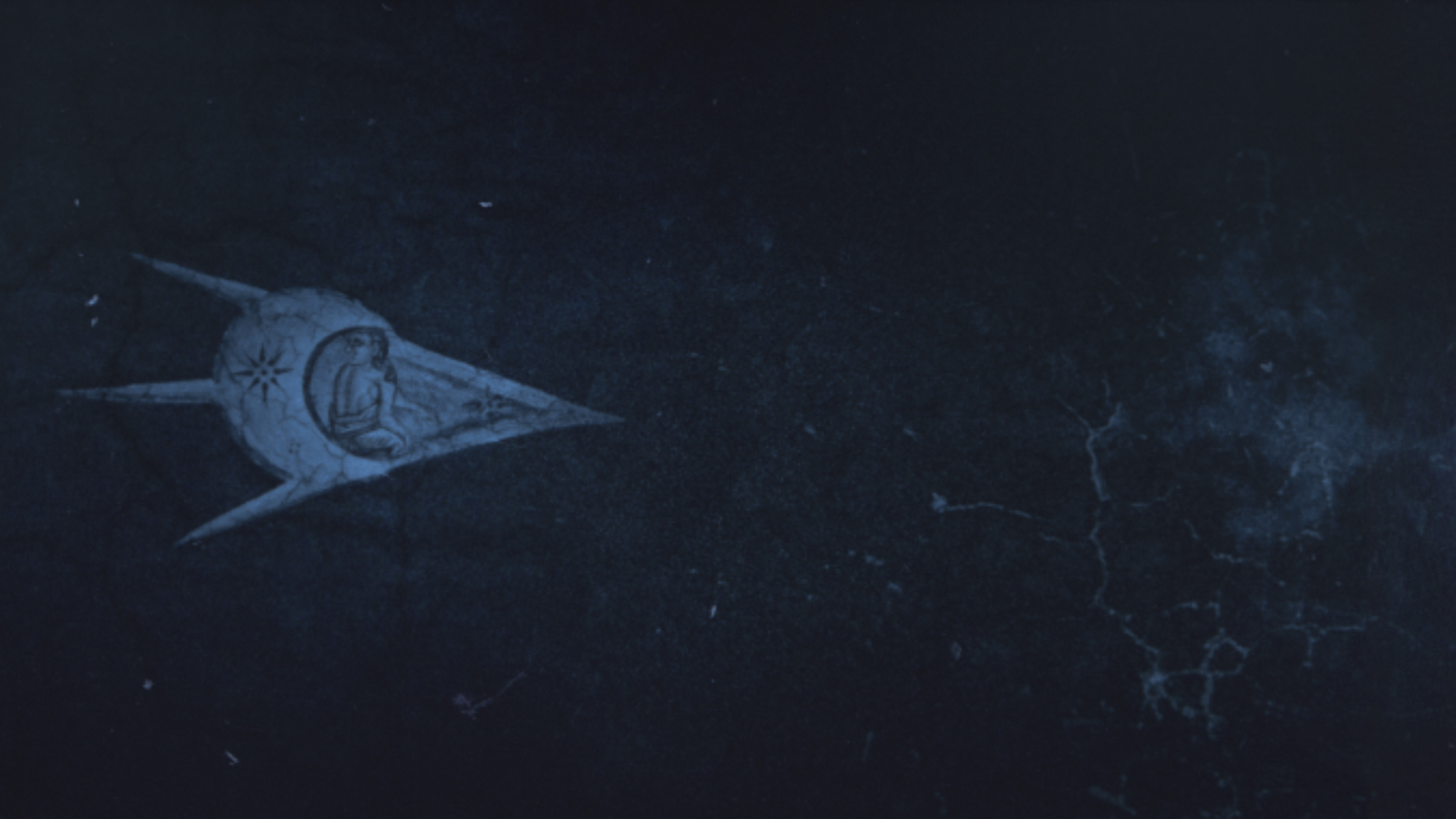 Although the title of the work is a negative assertion, leaving no room for speculation, the work is part of the “on speculation” theme from the exhibition, “The Grand Scheme of Things.”

The title, in fact, is a quote borrowed from a blog article that tries to clear up the “misunderstanding” about the existence of aliens in the fresco. After explaining this, the article ends with the conclusion that “there are no UFOs in the Dečani Monastery crucifixion.” The short phrase seemed absurd to me, but also provocative. In relation to something mysterious, in fact, it is more interesting to deny than to affirm it. Somehow, the denial that seemingly leaves no room for speculation does nothing but add to the speculation.

The video is projected on three separate screens, which suggest three different temporalities, each of them showing different spatial and temporal moments. Why did you decide this?

The impossibility of working in the Monastery directly has made the realization of the video quite challenging. However, finding some of the fresco’s details, through very small images, made it possible to extract the necessary information, as well as their movement in time. By getting closer to the blue cracked areas, the statement is debunked, the hypnotic movement naturally abstracted the fresco and made it look like a galaxy, like a planet… Visually, it looks like it’s taken from three early telescopes. One shows a close-up area, the other a wider shot, while the last one shows the cosmic object entering, passing very slowly and then disappearing.

Directly or not, religion is part of some of your works, such as your solo exhibitions N’jerm and Dramamine.

My recent solo exhibition at Basement Art Space in Tirana, titled Dramamine, curated by Zef Paci, explored a relationship with religion through stained glass windows, which were specially created and installed in the windows of the space. Featuring a plinth with a typically ecclesiastical design. There, the public encountered several forms of crosses, which gave the atmosphere of the exhibition a distinctly religious character. At least in the foreground.

Meanwhile, each of them was just a floor plan of a building. One is of the building of the former Kinostudio “New Albania” (now the Ministry of Culture), built during the communist regime as the main institution of cinematographic propaganda, while the other floor plan is of the building of the former Psychiatric Hospital of Shkodër. Both of these were buildings realized during a wildly materialistic and atheistic climate, which openly condemned any exploration of religion. 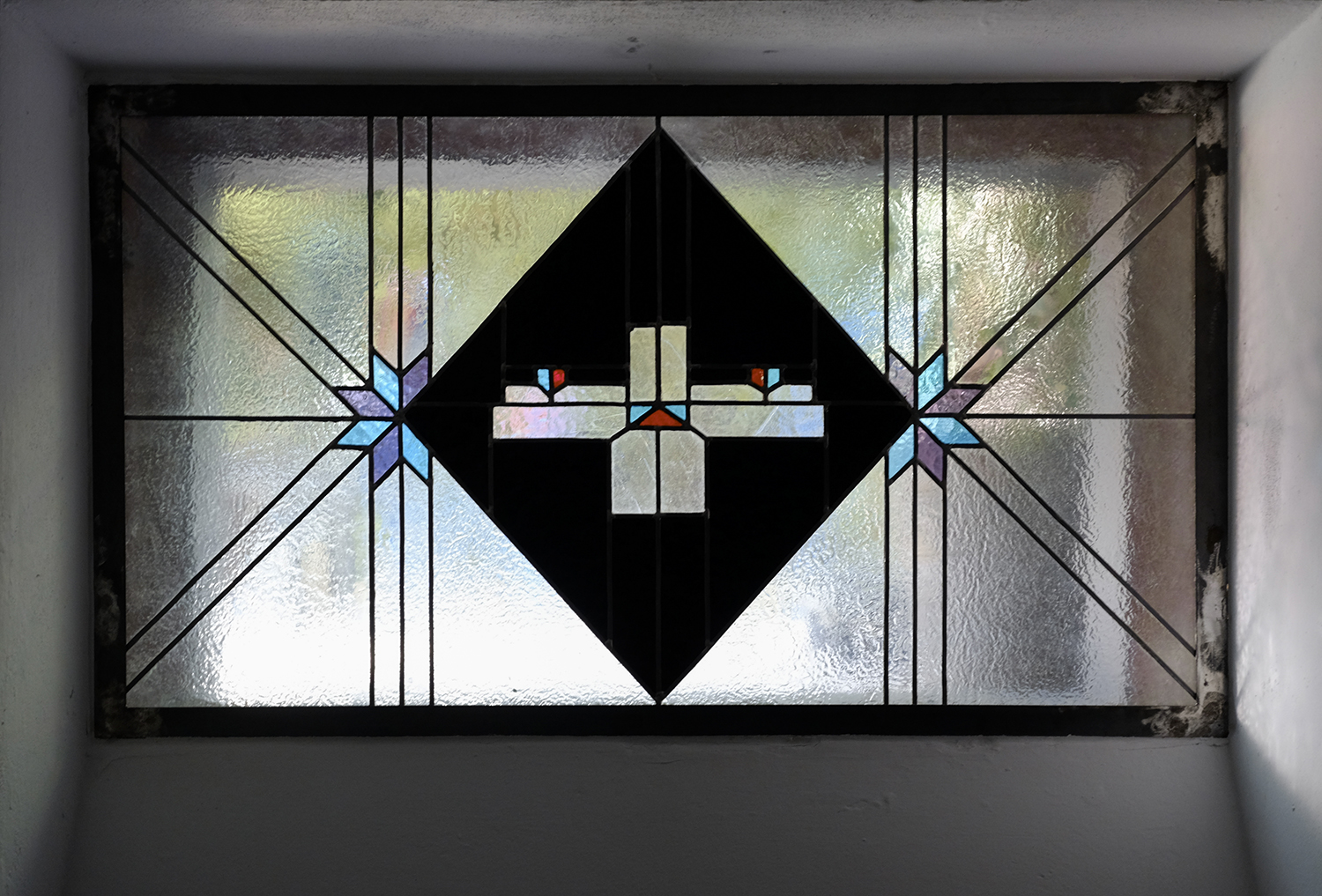 You have worked for a long time in the archive of the Marubi Museum in Shkodër and some of the exhibitions you have curated feature archival materials from this museum. Tell us about your work with Albanian archives and the archives’ condition.

The issue of archives is a constant problem. It costs a lot to maintain things according to the proper criteria. Goodwill alone is not enough. On the other hand, an archive cannot simply be reduced to a collection repository to fill a few empty corners. Platforms must be created for research and its follow-up. Urgent, as well, are the policies that need to be drawn up between state archives and private archives, to work closely with families where valuable funds can be found. Only in the Marubi National Museum of Photography, whose archive has over 500,000 negatives, in recent years, on the initiative of several families, photographic collections have been donated that not only increase the number of the archival fund, but also enrich its geographical scope.

Getting to know contemporary conceptual art has been a turning point in your artistic journey, since you originally studied painting. How do you see conceptual art today?

I do not have great enthusiasm. I refer more to the hyper-conceptual, hyper-political, hyper-relational rhetoric and so on, which cancels out something essential and subversive in the work. I have the impression that various contemporary artistic practices should restore the simplicity with which they still make a proper encounter possible.

Do you think that contemporary art needs to be re-enchanted in some way?

Exactly. To recreate the possibility of enchantment once again.

This article has been edited for length and clarity. The conversation was conducted in Albanian.

This article is the sole responsibility of K2.0.

Curious about how our journalism is funded? Learn more here.