Nearly two months after the construction company Rad 028 erected Mitrovica’s controversial 2-meter wall in front of the Ibar bridge in the north of Mitrovica, a young worker from the company was one of those returning today to pull down what he and his colleagues had built:

“We are doing what they say. I guess you have been reporting today like you have for the past year,” he joked to K2.0 in Albanian, in a nod to the local and international media attention that developments such as the latest issue with the wall tend to attract in Mitrovica.

The wall was built on December 8, 2016 in an act that Prishtina considered a violation of a much-hailed EU-backed agreement between Kosovo and Serbia that was signed in August 2015; the revitalization of the area surrounding the central bridge across the river that currently divides the Albanian-majority south and the Serb-majority north of the city, was one of four issues agreed in the ‘landmark’ deal. 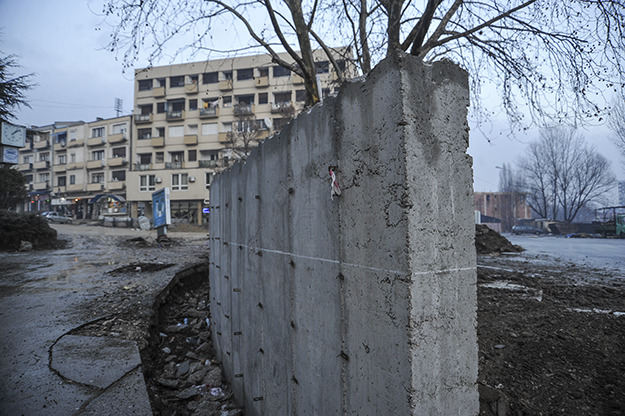 The 2 meter wall built in the Serb-majority north of Mitrovica in December has caused much debate for the past two months. Photo: Atdhe Mulla / K2.0.

Serb leaders have argued that the wall’s construction was purely practical and implied no aggression, with North Mitrovica’s mayor, Goran Rakic, insisting that the wall was built as part of the ongoing project to redevelop the area.

After weeks of debate, it took just an hour and a half — and two large construction vehicles — to tear the wall down yesterday (Feb. 5), as a handful of citizens from both sides of the river casually looked on; those from the south had to observe from across the river as police had orders not to allow people to cross the Ibar bridge for security reasons. 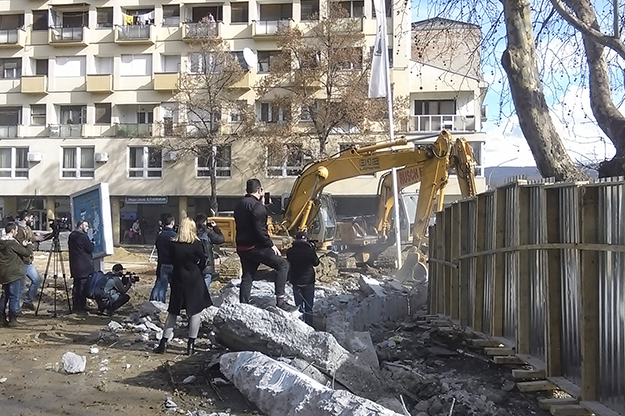 Mitrovica was once again the focus of local and international media in Kosovo, as the wall was demolished on Sunday lunchtime. Photo: Leonora Aliu / K2.0.

Starting at noon, the demolition was completed a few minutes before Kosovo’s prime minister, Isa Mustafa, held a media conference in which he emphasized that the decision to pull the wall down was taken locally, and not during the recent round of dialogue between Prishtina and Belgrade. Rakic declared yesterday that the decision was made following a five-day negotiation process that had begun before the latest round of EU-facilitated dialogue in Brussels on February 1.

Mustafa stressed that the local government in the north had been very cooperative and had acted constructively in the local discussions. “It is in our interest to sit down and cool the situation,” he told the media. “The place to do this is the Republic of Kosovo. It is my duty as prime minister to find the best way to communicate with everyone.”

The prime minister could not give an exact date as to when the Ibar Bridge — which for years has been blocked by concrete rubble and plants — will be re-opened. It was due to re-open by January 20, but that has been delayed given the disagreement over the wall.

The head of the EU Office in Kosovo, Natalyia Apostolova, who was in Mitrovica over the weekend inspecting the process of the wall’s demolition, said the bridge would re-open in the “very near future,” and insisted that when it did happen it would be another concrete step in the right direction.

“I think that we are witnessing a very important moment,” she said during a short statement to media as the heavy-duty vehicles pulled down the wall behind her. Apostolova insisted that the decision to bring down the wall would help to ensure free movement between the north and south of the city, while easing tensions between Kosovo and Serbia. 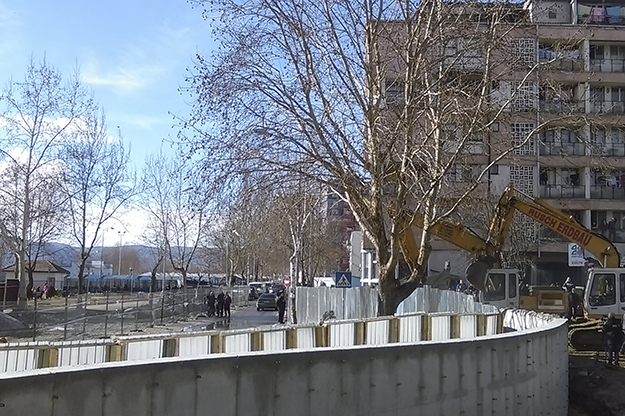 The wall was positioned at the end of King Petar Square, at the northern end of the Ibar Bridge. Photo: Leonora Aliu / K2.0.

She confirmed that another “structure” would be built as part of the revitalization of the King Petar Square, which will see the main street leading from the Ibar Bridge in the north of the city pedestrianized. “I can assure you that this is going to be the best square in the whole of Kosovo,” she said. “I can assure you that there will be no walls. There will be the necessary structure, which is going to prevent pedestrians [in King Petar Square] from being threatened by the traffic on the roundabout [at the northern end of the bridge].”

She also called upon both Prishtina and Belgrade to respect the agreements reached in Brussels, including the agreement to form an Association of Serb Majority Municipalities in Kosovo.

The decision to bring the wall down was reached between Kosovar Serb representatives in northern Mitrovica and leaders from Prishtina in the early hours of Saturday morning after negotiations mediated by the EU Office in Kosovo and the U.S. Embassy in Prishtina. This was confirmed by the EU Office, which released a media statement and pictures from the meeting.

After the meeting, which finished at 2:30am, the final approval for bringing down the wall was given yesterday by the North Mitrovica Municipal Assembly, after Mayor Rakic had presented the new designs for revitalizing the square. Rakic said that the new “structure,” which will support and complement the designs for the regenerated area, will be placed 2 meters further back from the site of the demolished wall, and will include rising bollards to prevent vehicular access to the square. 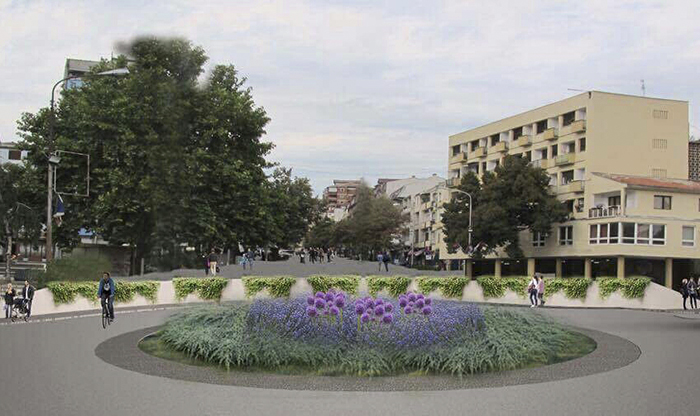 New designs for the area around the Ibar Bridge in the northern half of Mitrovica were approved and revealed over the weekend. Image: Courtesy of the North Mitrovica Municipal Assembly.

“We had the same solution even before the last meeting [in Brussels] but Prishtina did not want to hear it — they wanted this to be resolved at the local level,” said Rakic, alluding to the fact that negotiations had opened a day prior to the latest meeting in Brussels between leaders from Kosovo and Serbia. That meeting on February 1 included Kosovo’s president, Hashim Thaci, and prime minister Isa Mustafa, and their counterparts in Belgrade, Tomislav Nikolic and Aleksandar Vucic, whose involvement Rakic said was important for “these processes” to have solutions; Rakic later told media that he was frustrated  that an agreement to demolish the wall had not been signed in Brussels.

All 16 Assembly members who were present for the Municipal Assembly session — including representatives from the Serb, Albanian and Bosniak communities — voted in favor of the two items on the agenda: bringing down the wall and redesigning the ongoing revitalization project.

Notably absent from all of these decisions was the mayor of Mitrovica (south), Agim Bahtiri. Throughout the duration of the Municipal Assembly session in the north of the city, Bahtiri sat in a cafe near the bridge on the south side of the river, occasionally getting up to take a walk around, but without giving any statement regarding the wall.

After the wall had been demolished on Sunday, Rakic announced that the construction of what he had described on Saturday as “a concrete structure supporting and strengthening the square at a height of 70cm and a width of 120cm,” would begin on Tuesday (Feb. 7), and that it will “provide security for the citizens of northern Mitrovica.”K

Mitrovica in the media

With 2017 barely a month old, this is already the second time this year that Mitrovica has been the center of local and international media attention in Kosovo.

Last month, a train heading for Mitrovica from Belgrade that was emblazoned with “Kosovo is Serbia” in 21 languages raised political tensions between Belgrade and Prishtina. The train, which did not have permission to enter Kosovar territory, eventually stopped before entering Kosovo and returned to Belgrade. However not before a sharp escalation in rhetoric.

Serbia’s prime minister, Aleksandar Vucic, claimed that he ordered the train to be stopped as Kosovar Albanians had laid mines on the tracks, something that has been categorically denied by Prishtina. President Tomislav Nikolic later suggested that troops could be sent into Kosovo if he considered that Serbs were under threat.