With much of Kosovo celebrating Kurban Bajram (Eid al-Adha) at the beginning of the week, the news cycle got off to a slow start — and never really picked up after that…

The one major shake-up came in physical form, as many areas of Kosovo were rocked by an earthquake on Sunday. The epicenter of the quake, measuring 5.3 on the Richter scale, was just outside Macedonia’s capital Skopje; Kosovo’s neighbor has been on edge after experiencing a number of seismic episodes during the week.

In Kosovo, experts suggested that evidence did not point to a likelihood of a huge earthquake occurring in Europe’s youngest state, but that — due to the propensity for illegal construction and poorly monitored building regulation since the war — a relatively strong quake could cause still cause major damage.

A similar analysis could be applied to the state of the country’s politics.

The border demarcation with Montenegro debate rumbled on, with little sign of any real movement. Prime Minister Isa Mustafa continued his belated efforts to appear conciliatory, by touring around various meetings attempting to convince people that he is right. 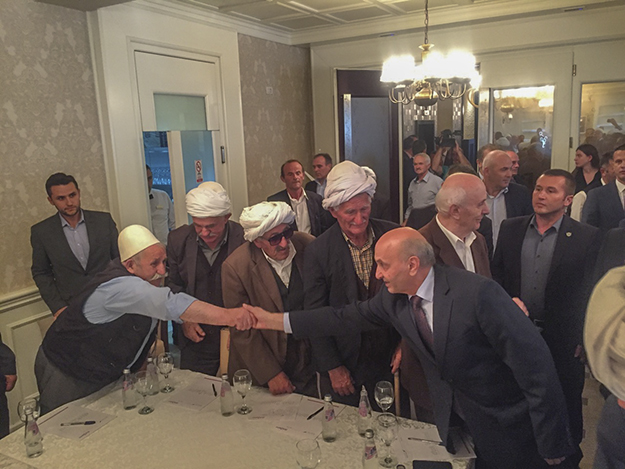 Late in the week it emerged that an attempt to break the deadlock has been made by Naim Rashiti, executive director of the Pristina-based think tank Balkans Group. Rashiti managed to get senior figures — although not leaders — of all the Albanian political parties (as well as international representatives) into the same room for a behind closed doors meeting on Thursday to try and find some common ground for brokering an end to the ongoing stalemate. Speaking to Rrokum TV, he revealed that it was the sixth occasion that such a meeting has now taken place and that although the representatives were still far apart in their stances, at least a process of dialogue was underway.

Hinting at potential signs of nascent political maturity, participants of Thursday’s meeting refrained from repeating their well-versed polarized rhetoric, instead suggesting that a consensus had been reached to keep the contents of the discussions private, and that only Rashiti was authorized to issue an official statement.

Meanwhile it was reported that an Assembly session will be held on September 22, with the border demarcation issue not featuring on the agenda.

After his heartfelt apology a fortnight ago, on Wednesday Adem Grabovci continued to show just how sorry he is for his central role in institutional abuse of power that has been revealed in the ongoing wiretap releases by investigative news portal Insajderi. Arriving to give evidence for the investigation into him for misuse of an official position and violation of the equal status of citizens and residents of the Republic of Kosovo, Grabovci chose the moment to crack a joke. “I’m here to appoint some special prosecutors,” he told reporters, referencing the revelations in which he has been heard arranging for PDK party affiliates to be installed in top public positions.

Once he had breezed inside — without undergoing the mandatory police check of his car — he refused to answer any of the Special Prosection’s questions. The previous day Grabovci had seen his request to delay his questioning rejected. 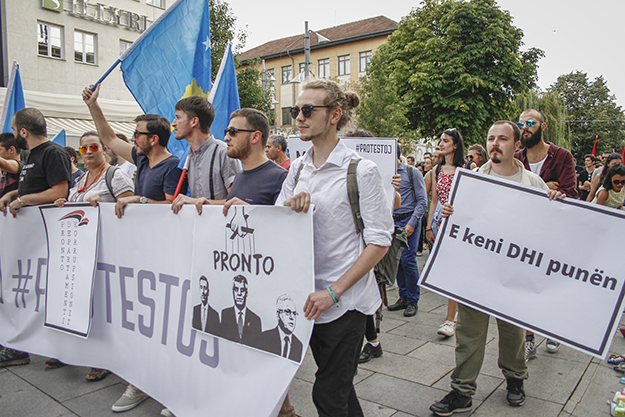 Following Grabovci’s latest display of contempt, representatives of citizen-led protest movement #Protestoj gathered outside the Special Prosecution offices on Friday demanding that Grabovci resigns his role as an Assembly deputy; although he stepped down as head of largest coalition party PDK’s parliamentary group last month, the man widely referred to by party affiliates as Shef (Boss) hasn’t felt the need to give up his mandate as a representative of the people.

On Tuesday, a dwindling number of #Protestoj supporters marched through the center of Prishtina for an eighth time, before representatives symbolically wrapped police tape around the fence of the government building.

After Kosovo’s Minister for Dialogue Edita Tahiri jumped the gun in Brussels last week by suggesting that an agreement on recognizing their respective states’ vehicle license plates had been reached with her Serbian counterpart, official confirmation of a deal was announced on Wednesday. According to an EU External Action Service press statement, from November 15, so-called ‘proba’ plates will no longer be required for traveling between Kosovo and Serbia. Instead stickers will be used to cover “relevant parts” when crossing the border.

An announcement that the EU-facilitated technical dialogue between Prishtina and Belgrade would continue on September 26, was followed by Tahiri musing that a future redesign of the process may be necessary, with each party represented “in full, at all levels.” Seeing how well the Montenegro border demarcation issue has gone, Tahiri suggested that Kosovo could establish a top level “unity team,” such as the one that represented the state in Vienna last year when that deal was signed. 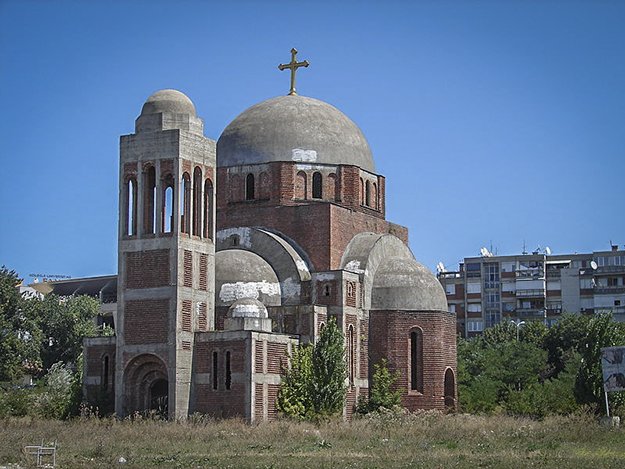 While Tahiri and co were chatting cordially in Brussels, there was disagreement back in Prishtina regarding the unfinished Serbian Orthodox church. On Tuesday, Deputy PM Branimir Stojanovic was part of a group of Serbs including priests, monks, nuns and bishops, who began revitalization work on the controversial building — located on the University of Prishtina campus, work on the church’s construction began during the 1990s at a time when Albanians were repressed by Slobodan Milosevic’s regime and is therefore seen by many Albanians as a provocative symbol of that period. After much debate, the work was stopped on Thursday by the Municipality of Prishtina’s directorate of inspection, which ruled that the individuals did not have the necessary permission to carry out building works on the site.

Seismic waves look set to be made early next year, after it was announcedon Thursday that it is expected ‘judicial activity’ at the new specialist chambers — or ‘special court’ — is expected to begin in the first half of 2017. The Hague-based court is being established to investigate alleged crimes committed by members of the Kosovo Liberation Army during and after the war in Kosovo.

US-lawyer David Schwendiman, who was last week appointed to head up the new Special Prosecutor’s Office, told a press conference that he would fearlessly probe allegations and would not be swayed by outside pressures. “I intend to do this job the way I have always done things in the past; fairly, vigorously, and without fear or favor,” he said.

There’s no shortage of entertainment this weekend to keep you busy. For a dose of Albanian traditional culture, head to Etno Fest on Friday and Saturday in the village of Kukaj, near Prishtina. For full details, check out their Facebook page.

For a bit of literature, films and top music by a lake, the Flo Festival of Literature is taking place throughout the weekend, with a free bus leaving from Dit’ e Nat’ at 17:30 each day. The festival’s full schedule can be foundhere.

If you’re in search of a little soul, check out Grammy and Brit Award winning British singer-songwriter Joss Stone, who is set to perform in Zone on Saturday night as part of her Total World Tour.

And finally, because it’s the weekend — and just because — we leave you with a song. If you’ve never heard of Joss Stone, or need reminding of her acclaimed vocal talent, take a look at her duet of “Angels” with Robbie Williams at the Brit Awards in 2005: