How do we reclaim Prishtina’s common grounds?

On Friday (June 30), K2.0 hosted an open discussion on “Reclaiming common grounds for Prishtina” at Termokiss. The talks on revitalizing unused or abandoned public spaces were part of the Which Common Ground for the Balkans project, supported by Balkan Arts and Culture Fund BAC.

Termokiss was chosen as the venue as a case in point of the potential of abandoned spaces; an unused part of the Termokos Heating complex in Prishtina, it was revitalized last year as part of a joint effort by a group of Kosovar, Belgian and Swiss young people. Improvised windows were installed, a roof was constructed and the walls were painted with positive messages and different motives.

“There was a large group of people, it was all-encompassing work,” said Arber Salihu, a member of the Termokiss community

He said physically transforming the large grey slab of concrete into something resembling today’s social center took 10 days. That wasn’t the only challenge they faced, there was also political red tape from the Municipality and working out how to run it as a community space once established. 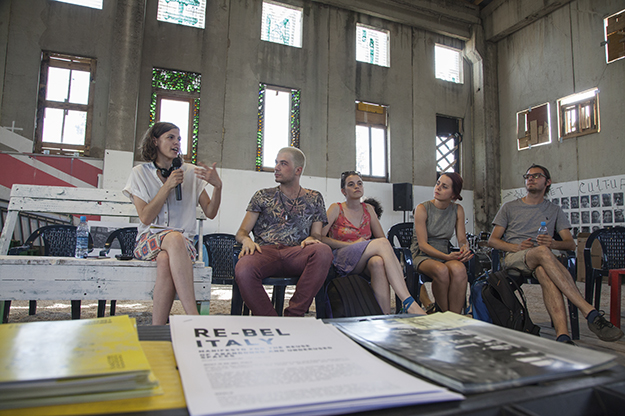 “Nobody should benefit financially from the activities here,” Salihu said. “We should get out of the circle that you have to pay someone to get services.”

The threat of privatization was one of the few recurring themes of the night. In Peja, the 15 year lease for Jusuf Gervalla, the only cinema in the whole Peja region, was awarded to Anibar in a public auction in December, after it was suddenly and unexpectedly put on the list of properties to be privatized. Anibar, a youth culture organization utilizes the space as one of its venues for their annually held Anibar International Animation Festival. 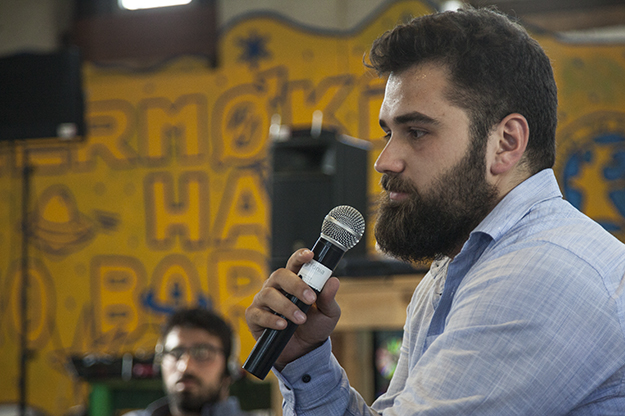 Vullnet Sanaja explained how Anibar took on the lease for the Jusuf Gervalla cinema in Peja, after receiving little support from the local municipality. Photo: Majlinda Hoxha / K2.0.

Anibar did not want to see the cinema privatized and has taken over the management of the place in order to prevent that happening, but director of Anibar, Vullnet Sanaja said that nobody in the Municipality seems interested in the place.

“We still believe someone else should be running it,” Sanaja said. “This all started because there was a lack of action by city officials in Peja.”

Holding an annual event at Jusuf Gervalla keeps the place in use at least for a period every year, making sure it does not fall back into abandonment.

The word “temporary” was another theme of the night. Speakers discussed and provided ideas on how to make sure that revitalized spaces do not fall back into abandonment after “one-time events.”

Giulia Cantaluppi of Temporiuso, an Italy-based project to propose usages of temporary spaces, suggested that people shouldn’t be scared of the idea of “temporary.” “The word temporary is like the opportunity to experiment with a new destination without too much investment,” she said. “Temporary doesn’t mean to be precarious, it means to be experimental … The idea is that if it works, why not? Then we can make it work for a longer time.” 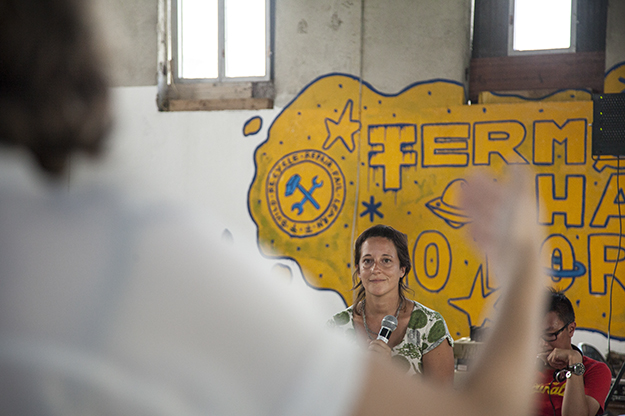 Giulia Cantaluppi has experience in helping to revitalize spaces from working on such projects in Italy. Photo: Majlinda Hoxha / K2.0.

She said that for spaces like Termokiss to work, it isn’t about long term city planning, instead short term goals should be set. She stressed that these spaces should not be used to create “social politics” in a place lacking governance, it should be seen as a right to use empty spaces nobody has a plan for.

Despite the term “temporary,” Cantaluppi suggested that some basic procedural steps that can be followed in order to transform empty spaces into cultural capitals.

Firstly, mapping the city and knowing where these spaces are. Then mapping the population, to find out what is needed at the current time. Next is installing infrastructure, before obtaining the necessary insurance, paperwork, permits, etc. After that comes the decision of working out exactly what to do with the space and creating a community around it, communicating with the neighborhood and holding events.

In the public interest

To establish this, legal procedures with the Municipality would have to take place, which caused a debate as to whether the Municipality is doing enough to ease the processes for legal revitalization of empty spaces.

Unused buildings in Prishtina may be given to takers for purposes that serve the public interest, but the criteria of “public interest” has never been established in a concrete manner. This served as a major point of debate between community members and Kukaj. 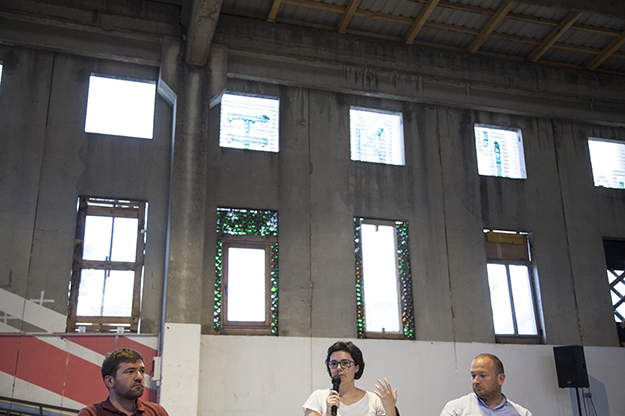 Other questions raised included plans to construct buildings on unused land when there are already buildings that serve no purpose available, and the inclination of allocating land to “bidders” who can offer more economically rather than those with plans for the community.

“We don’t have a magic wand that can change things,” Kukaj said. “We are making sincere attempts to cooperate.”

The municipal representatives stressed that they have to go by the book and any bureaucratic obstructions faced during the process to reuse empty spaces are never intentional and merely a result of policies in place.

Besart Vllahinja, head of the Department of Culture at the Municipality of Prishtina suggested that people like him and Kukaj want to help the community reclaim public spaces and have done as much as they can in accordance with the law. However he insisted there is a line between what is appropriate and what is illegal. “We are suffering from legal consequences, we don’t have immunity,” Vllahinja said.

Ultimately the discussions highlighted that starting and running a social center or a cultural center from abandoned spaces is not as simple as it may sound, and is not simply a case of squatting somewhere with a bunch of friends, beers in hand. A will has to transform into action, labor, time and effort and it has to be a collective will. Cooperation and approval is needed for legal procedures to go smoothly. To make things work and last, a community is needed.

“You open a space and then what?” asked Cantaluppi. “Social capital, is needed.”K