“Are you married?” — this was the first question that Genta was asked when she visited the gynecologist at the University Clinical Center of Kosovo (QKUK). The doctor wanted to know whether or not she was sexually active.

For the 21-year-old and her friend it was their first visit to the gynecologist, and the experience was not a positive one. Not least because their request for advice on how to manage stomach pains and mood swings before and during their menstrual cycles were belittled.

“All girls feel pain,” the doctor told them. “Don’t make it a big deal. And emotional problems are not related to the cycle. Go visit a psychiatrist.”

The gynecologist’s casual dismissal of the girls’ medical issues left them in constant pain for a week every month. “I was experiencing a lot of pain and dizziness,” Genta says. “I couldn’t concentrate on my work and I was often accused by my colleagues of exaggerating; they would say that you have to get used to it, since it occurs every month.”

The treatment received by Genta and her friend is symptomatic of a wider issue in Kosovo, where misconceptions over reproductive rights mean they are routinely neglected, despite protections ensured by a legal framework that is in harmony with EU law. There is a hesitance to speak openly about this subject because of a mentality that tends to mostly view women’s bodies within the moral framework of shame.

Gender equality activist Shqipe Gjocaj says that women’s health is considered unimportant in families and society due to a patriarchal mindset. “Women take care of others in their families. They take care of their children, husband, husband’s parents and their own parents,” says Gjocaj, adding that women are educated to accept such a role and to consider themselves less important. “In this way, women’s health and welfare remains the lowest priority.”

In a 2016 Kosovo Women’s Network report on access to health care, women are reported to have significantly more socio-cultural barriers than men. “In Kosovo, important decisions within the household, including when women and children should go to the doctor remain overwhelmingly made by men, which can hamper women’s access to healthcare,” the report states, pointing out that if family resources are scarce, male family members may have priority for health care.

According to this prevalent discourse, women’s health becomes meaningful only when women give birth to children — especially boys.

Medical issues with the menstrual cycle are seen as problematic only when they may cause sterility, whereas considerations over women’s nutrition during pregnancy is directly related to the needs of the fetus. When people speak about the importance of educating women regarding their health, they often imply the influence that women can have on the growth of their children.

Even when a mother dies in labor, it tends to get spoken about in relation to the impact this will have on the baby, rather than the loss of the woman’s life. 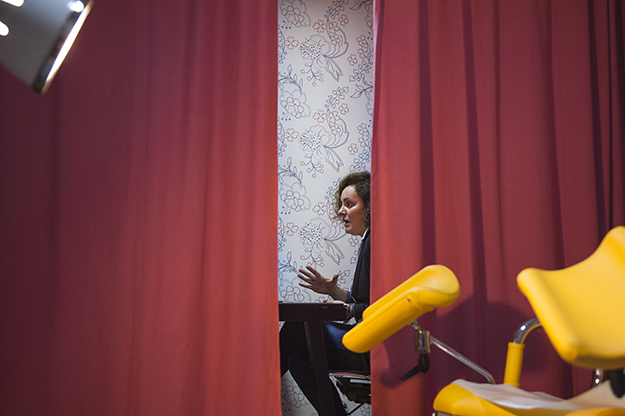 Gynecologist Jehona Binishi Hysa says that the majority of women don’t seek advice for most health issues and that those making regular gynecological visits are rare. Photo: Majlinda Hoxha / K2.0.

In this context, routine gynecological visits are still a rarity in Kosovo, with gynecologists saying that women usually seek professional care only when they are pregnant or are planning to create a family, as well as in cases when they experience serious issues related to infections. Women very rarely seek advice for other health issues.

“I can say that this is the case for 90 percent of the population,” gynecologist Jehona Binishi Hysa says. “However we have 10 percent of women who do consider their health important.”

A more rounded conception of reproductive health doesn’t limit it only to pregnancy, procreation or abortion, but also recognizes the special health needs of adolescents and women post-labor, as well as those related to the menopause and family planning. 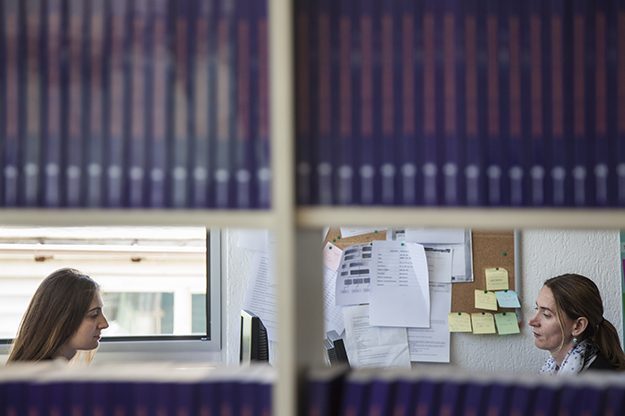 Action for Mothers and Children representatives Dorina Grezda and Evlanda Gojani believe that more needs to be done to inform women of their reproductive rights and where they can access services. Photo: Majlinda Hoxha / K2.0.

Dorina Grezda and Evlanda Gojani from the NGO Action for Mothers and Children (AMC) say that the main reason behind the low rate of gynecological visits is the lack of information regarding where women can access these services.

“For most women, especially those who don’t live in urban areas, accessing this information is difficult,” Grezda and Gojani wrote in an email response to K2.0. “This comes as a result of a shortage of state-run nationwide education campaigns that promote ‘comprehensive’ education.”

The representatives say that this form of education would properly inform citizens about their rights and choices in terms of sexual health, reproductive health and building non-violent relationships.

Action for Mothers and Children

AMC highlight that one of these myths is that comprehensive sexual education encourages young people to engage in sexual activity early on. “Many research studies, including studies conducted by the World Health Organization, have found the opposite to be true,” Grezda and Gojani point out.

The AMC representatives say that these programs do not encourage sexual activity amongst young people, especially amongst those of younger ages, because through these programs they are informed about contraceptive methods that are suitable for them, as well as decisions that they can make about their lives.

It’s not only young people who are unable to make informed choices relating to their reproductive health.

“The right to give birth, to abort, or to be a self-feeding mother, should be respected as incontestable women’s rights,” Gjocaj says. “Although these rights are protected by law, social norms are harsh, denying women their right to make informed decisions about their bodies and their future.”

“Another myth is that the coil causes cancer, which is just plain misinformation.”

According to a 2013-14 Kosovo Agency of Statistics monitoring report on the health of women and children, 66 percent of women who are married or live with a partner use contraceptives. However, only 13 percent of these women use modern methods.

Gynaecologist Hysa says that there is a myth about contraception, which claims that it can cause sterility. “Girls say to me, ‘So I should protect myself and then be unable to get pregnant?’” Hysa reveals. “Another myth is that the coil causes cancer, which is just plain misinformation.”

Because of the low rate of usage of contraception methods, women often face unwanted pregnancies, which end in abortion. A research study conducted by Preportr found that there is a high rate of illegal abortions being conducted in unlicensed clinics or in houses through the use of tablets. Out of Kosovo’s 122 private gynecological clinics, only five have abortion licenses, while at QKUK there are around 100 abortions per year. 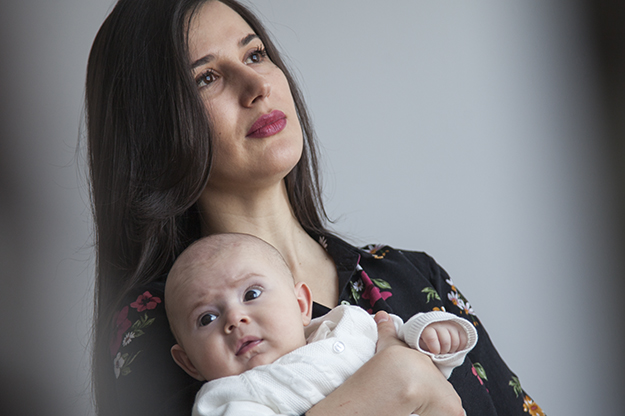 Gjocaj feels that the debate about reproductive health is one that is deficient in the framework of feminist activism in Kosovo. She says that institutions and civil society have not organized enough meaningful long-term activities related to women’s sexual and reproductive health.

“The mistreatment of women in the gynecology and obstetrics sectors of QKUK has often been documented in the media, but institutions have done almost nothing to improve the situation or to hold someone responsible,” says Gjocaj, before highlighting the case of Arbenita Spahiu, whose death while giving birth at the Regional Hospital of Gjilan in March 2016 was followed by allegations of negligence by doctors. “The gynecologists who were accused in Arbenita Spahiu’s case were not punished, and they continue to work today as if nothing happened.”

The consequences of women not getting routine gynecological check ups can also be potentially fatal. The low rate of routine gynecological visits means that illnesses that lack initial symptoms, such as cancers that affect the reproductive organs, are discovered only after they have caused serious health issues.

According to global non-profit World Cancer Research Fund International, cervical cancer is the fourth most common cancer among women in the world, with the most recent global statistics showing that there were more than 527,000 new cases diagnosed in 2012. In Kosovo, cervical cancer is the second most prevalent cancer among women — after breast cancer — with 225 new cases diagnosed in 2016.

“Cervical cancer is very aggressive and [can be] fatal, but annual PAP tests detect the earliest signs of cancer.”

If this type of cancer is discovered in time, curing it is easy and the probability of successful treatment is very high. Regular PAP tests and vaccination against Human papillomavirus (HPV) prevent 90 percent of cervical cancer cases.

Hysa says that although in Kosovo there is a lack of reliable statistical data relating to trends of cancer cases, doctors are anecdotally reporting that, cancerous illnesses are on the rise. “Cervical cancer is very aggressive and [can be] fatal, but annual PAP tests detect the earliest signs of cancer,” she explains, adding that this is an easy method for preventing malignant illnesses.

According to Hysa, after giving birth women often think they do not need to visit the gynecologist anymore, and this makes for a situation in which such illnesses are identified too late. 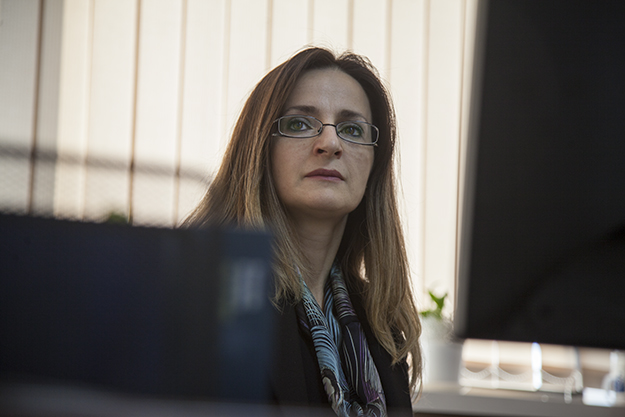 Deputy Ombudsperson Majlindë Sinani Lulaj says that her office has recommended a comprehensive cancer screening program for women, but that this has yet to be implemented. Photo: Majlinda Hoxha / K2.0.

Majlindë Sinani Lulaj, deputy Ombudsperson in Kosovo, highlights that there is no systematic examination for breast cancer or cervical cancer.

“In the National Assessment of Sexual and Reproductive Health and Rights, which was sent to the competent authorities, the Ombudsperson included aspects relating to breast cancer and cancers that affect the reproductive system,” she says, referring to research published in 2016. “Among other things, it was recommended to extend the screening program throughout the whole territory, as foreseen by international standards.”

The representatives from Action for Mothers and Children agree on this, saying that the focus should remain on the creation of and access to national screening programs, which would benefit women all over Kosovo. According to them, services that ensure early discovery and treatment of breast cancer and cervical cancer should not only be an essential component of the health care system but a top priority.

For now, however, despite potentially being a matter of life or death, reproductive health in Kosovo is still widely treated as a luxury, rather than a fundamental right. 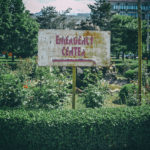 Back to Health Monograph