Down syndrome community raises its voice

Twenty-year-old Aldi Hoxha is from Gjakova, although he lives with his father and brother in Prishtina. He has recently started working at a newly opened cafe in the city’s Pejton district, and, as for many young people in Kosovo’s capital, fresh employment and spending time with his colleagues has helped make life more enjoyable.

As well as starting a new job, Hoxha has also just taken part in a pan-European project. He has Down syndrome, and was selected as Kosovo’s representative in the European Down Syndrome Association’s “My Voice Counts!” initiative, which aimed to show what people with Down syndrome all around Europe have to say, how they participate in their communities, and what their hopes, wishes and demands for the future are. The project culminated on World Down Syndrome Day (March 21) — the same day Hoxha’s new place of employment, Cafe X21 was opened by the NGO Down Syndrome Kosova. 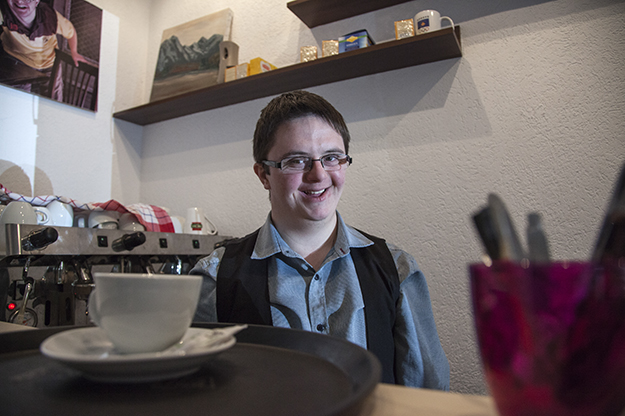 Down Syndrome Kosova was founded by the parents of children with the condition and is the only organization of its kind in the country. The organization has many different projects that aim to raise awareness in society, including tackling a lack of early diagnosis in rural areas.

Down syndrome, also known as trisomy 21, is a genetic disorder. Every cell of a human body has a nucleus, in which genetic material is stored in genes. Genes carry the codes responsible for all our inherited traits and are grouped along rod-like structures called chromosomes. The typical nucleus of each cell contains 23 pairs of chromosomes. Down syndrome occurs when an individual has a full or partial extra copy of chromosome 21. The additional genetic material affects the course of development.

In Kosovo, about 900 people are thought to live with Down syndrome. However, this number is only an estimate since the condition is often not recognized by parents or doctors. “The younger generation is more aware of the problem than the older generation,” Kayabasi explains. “Our organization is endeavoring to reach the periphery, because the problems are in the periphery. The doctors in rural areas often do not help.”

Parents frequently do not know that their child has Down syndrome, and in many cases the therapeutic possibilities are sought only late on. This causes complications as support for the condition at an early age is extremely important. “Many children are not supported from birth,” Kayabasi says. “Sometimes children come to us only at the age of 13. At that age, it is difficult to start therapy with the children.”

“It is a bit stressful, but it is also so rewarding, when you see the results and the objectives that you’ve reached after working with a person for a month or a year.”

Kayabasi believes that accurate, countrywide statistics on the number of people living with Down syndrome are essential as a statistical survey, especially in the rural areas, would help to identify the condition in children at an early age and enable suitable therapy options.

It is one of the long term projects that Down Syndrome Kosova has set itself, but it also has other aims, such as offering a range of different therapy options; from psychotherapy to speech therapy and physiotherapy to occupational therapy. Support for the family, including family therapy and family counseling are also all key goals.

To help offer these services, Down Syndrome Kosova run a therapy center, where Marigona Sadiku has been working as a therapist for over a year, specializing with children aged between 4 and 17. Alongside therapy, the organization also conduct daily and weekly activities outside of the center — such as games for young children at the National Library, to help get them accustomed to that environment. 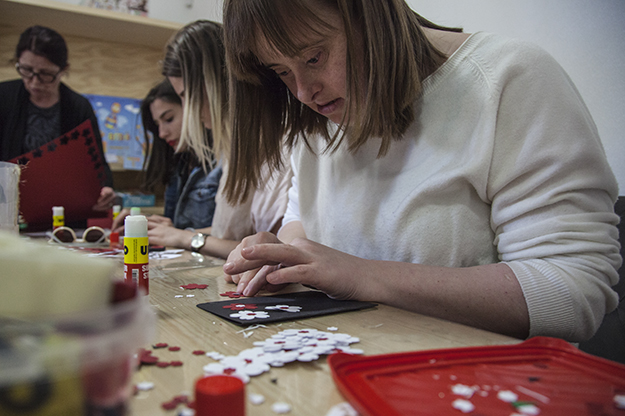 Down Syndrome Kosova run a range of activities for the people it works with. Photo: Majlinda Hoxha / K2.0.

Sadiku says that working with people with Down syndrome is a fulfilling experience. “It is a bit stressful, but it is also so rewarding, when you see the results and the objectives that you’ve reached after working with a person for a month or a year,” Sadiku says. “All the energy spent and all the stress is then so quickly forgotten. They are the most loving people. They are so thankful, even when you reward them with the smallest things. They thank you from the heart. Most people say it like an obligation, or just good manners. When they say ‘thank you’ or ‘good morning,’ you can feel that they say it from the heart.”

Unfortunately the facilities at the center do not meet the therapy requirements as they do not have enough space and only small rooms, so they have to hold different therapy lessons in the same room. There is also a lack of didactic equipment, such as books, puzzles and exercises for concentration.

Another area with shortcomings is health care. To help combat this, Down Syndrome Kosova has been cooperating with a number of hospitals and medical laboratories. They have made an arrangement for some hospitals, particularly the Bahceci hospital on the road between Prishtina and Lipjan, to offer a free examination to people with Down syndrome.

Many families have taken up this service, and the children who come in have often not received a proper medical examination before and therefore have no diagnosis or medical history.

“Often families come with nothing in their hands,” Kayabasi says. “They do not have any medical records. In such cases, it is difficult to make a suitable and adapted therapy because many children with Down syndrome suffer from thyroid and heart disease.

“This is why you have to start from scratch,” she adds. “You have to send the children to the hospital so that they can be examined by specialists. You need that to know where to start the therapy.”

Then there is employment, one of the most important issues for many people with disabilities. Alongside Cafe X21 is a production facility, where people with Down syndrome produce honey and make handicrafts like gift cards and gift boxes. 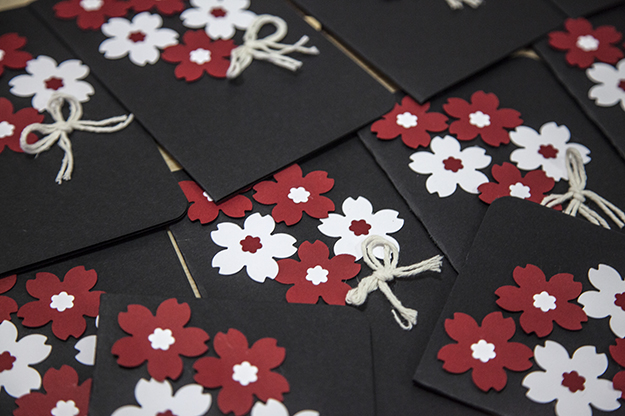 In a production facility next door to Cafe X21, people with Down syndrome make handicrafts and honey. Photo: Majlinda Hoxha / K2.0.

These handiworks have a wide reach, and are sold in many countries, as well as in Cafe X21. The proceeds go to Down Syndrome Kosova so that further projects can be financed. This year, the organization wants to expand the production plant to produce not only honey, but also jam which is suitable for diabetics and is nevertheless inexpensive.

Another project, in Prizren, is also in the pipeline — a small restaurant with a teaching kitchen for people with Down syndrome. Participants have the opportunity to complete an education both in the kitchen and in service, under professional guidance. The project is due to begin in June with the training lasting six months. 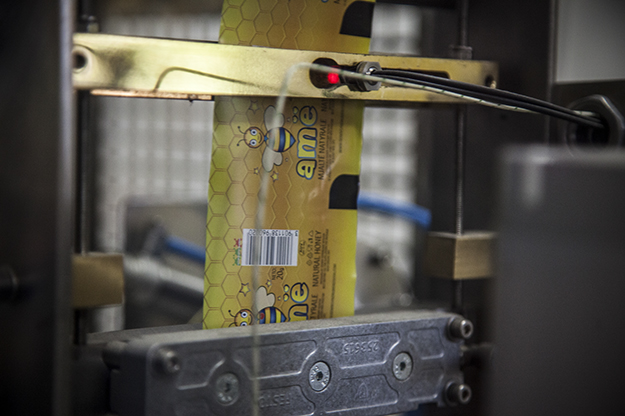 The honey made in the production facility run by Down Syndrome Kosova is sold throughout Kosovo and also abroad. Photo: Majlinda Hoxha / K2.0.

At Cafe X21’s opening last month, the good weather ensured a large crowd gathered to show their support, including members of civil society alongside other notable figures from Kosovo’s political and business world.

Kayabasi reveals that many companies offer their help and support to promote projects like these and that assisting with the project is a whole team of voluntary helpers that support the organization. “We live by the fact that people support us voluntarily,” she reveals. 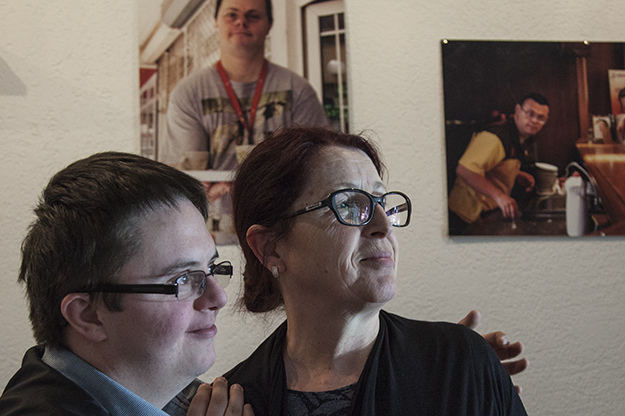 She also says that the government’s support at these events is appreciated, cooperation with the ministries has intensified and that a good relationship is developing, although there is still a long way to go. “The willingness of the government and the ministries to change something is there, but the implementation is still missing,” she says.

Above all, Kayabasi is positively surprised by civil society in Kosovo. “We have a strong civil society here,” she notes. “People are very motivated to work in social fields. There are many social organizations, especially in the field of disability.”

However, while Aldi and his colleagues at Cafe X21 enjoy the support of Down Syndrome Kosova, Kayabasi insists that from education to health care, more needs to be done to support him and his peers. “Support for people with disabilities in Kosovo is still in baby shoes,” she says.K