The regional and global ties of Balkan anti-vaccine conspiracy theorists.

On September 24, a massive protest brought people from all over the region to Zagreb’s central square. Videos of the protest show people waving Croatian flags alongside banners that read, “There is no excuse for this violence.” The violence in question? Covid-related public health measures and vaccines.

Jurinčić began her speech with a nationalist slogan. “God and Croats!” (Bog i Hrvati!), she called out, before launching into her speech in which she referred to public health measures as “crimes committed as part of a battleplan with the codename Covid-19,” and said that the pandemic is fake. The perpetrators of this great fake are, according to Jurinčić, the World Health Organization and the Chinese Communist Party.

She concluded her speech with the words, “We are at war!” The speech has over 90,000 views on Youtube, and many more if other platforms are included.

The protest was called the “Freedom Festival,” and was organized by the initiative “Rights and Freedoms” (Prava i slobode), founded in 2020 in response to the Covid measures in Croatia. Similar events are taking place in other countries across the region. Some, like those in Slovenia, have become violent. 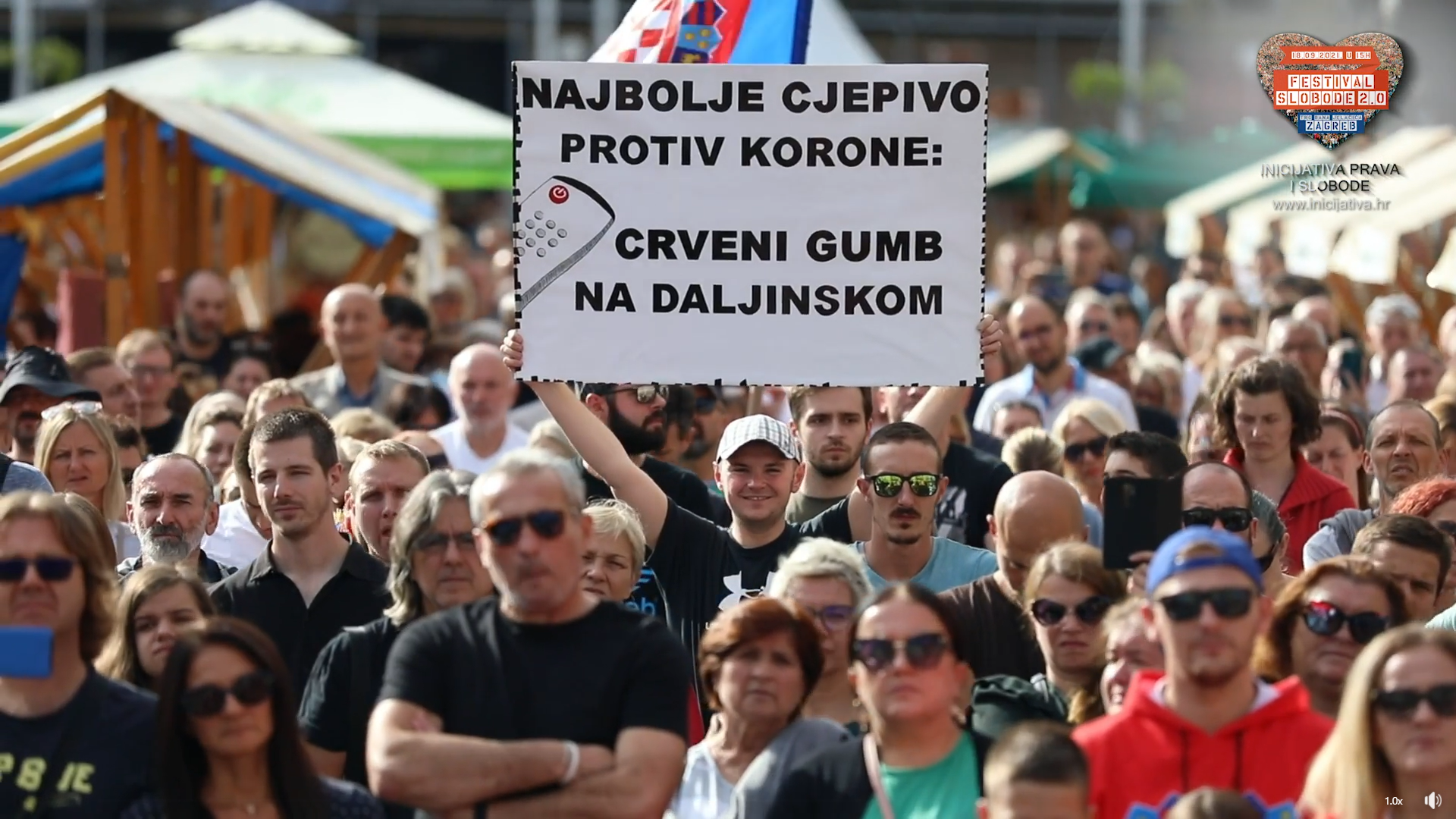 During anti-vaccine protests all over the region participants often blame the media. One of the posters from Zagreb reads: “The best vaccine against the covid – red button of the remote control.” Photo: Still from the Freedom Festival in Zagreb.

“They see in vaccines some kind of unnatural or dirty intervention by the world’s liberal powers and corporations, while considering their body a temple,” said Kišjuhas.

The Balkans as a region has one of the lowest Covid-19 vaccination rates in Europe. Serbia, Croatia and Slovenia are roughly between 40 and 50%; Montenegro, North Macedonia and Kosovo between 30 and 40%; Albania is almost at 30% and Bosnia and Herzegovina hasn’t even reached 20%.

Though Facebook and other social media platforms have proudly and publicly touted their content moderation strategy for reducing misinformation about Covid, an internal Facebook report that was recently leaked warned that “Our ability to detect vaccine hesitancy comments is bad in English and basically non-existent elsewhere.” Throughout the region, anti-vaccine ideas and conspiracy theories about Covid find fertile ground in social media, with little sanction or moderation.

One of the types of places where these ideas spread is on the Youtube channel Bujica, which has over 50,000 subscribers. The channel’s host, Velimir Bujanec, is a far-right public figure with a criminal record in Croatia for cocaine possession and paying for sex with cocaine. He was also photographed in the 1990s wearing a Nazi uniform.

Throughout the region, anti-vaccine ideas and conspiracy theories about Covid find fertile ground in social media, with little sanction or moderation.

Bujanec interviewed Nada Jurinčić in one of his episodes, an episode which was fact-checked by the Croatian publication Faktograf and found to have a number of false claims. But as is often the case, the fact-check article receives many fewer views than the over 200,000 views the original false claims received.

Another popular figure among anti-vaxxers in the region is Semir Osmanagić, a Bosnian “spiritual researcher” who has argued that the Mayans were descendents of an alien race from outer space and that Hitler escaped to an underground base in Antarctica after World War II. Osmanagić made a video appearance at the Zagreb protest in which he drew parallels between Nazi Germany’s persecution of the Jews and Covid-19 measures. The claim that anti-vaxxers are the modern-day equivalent of Jews under Nazi Germany is a frequent trope in international anti-vax discourse. 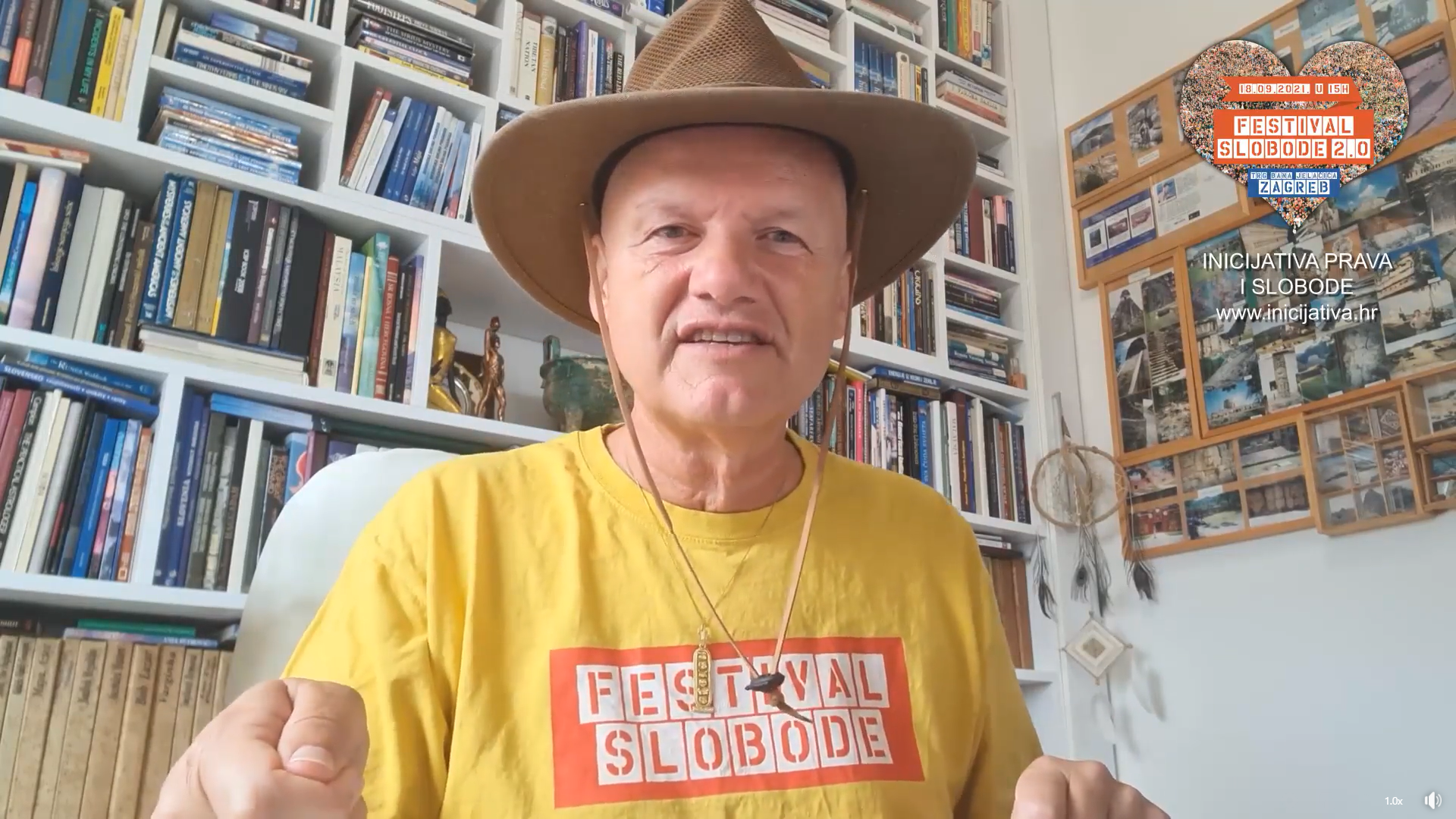 Semir Osmanagić, a “spiritual researcher” from Bosnia, preaches against Covid measures on his social media that is followed by tens of thousands people. Photo: Still from the Freedom Festival in Zagreb.

Recently he has turned his social media channels into sources of misinformation about Covid and vaccines, including claims that the supposed pyramids in Visoko have healing effects against coronavirus. His claims were buoyed by the prominent visits of celebrities such as Serbian tennis star and vaccine skeptic Novak Djoković, who visited the site in Fall 2020 and drew more attention and tourists to Visoko and Bosnia, where Covid measures are weakly implemented.

Bosnia has the lowest Covid vaccination rate in Europe and one of the highest per capita Covid death rates in the world.

Perhaps the most extreme anti-vaccine movement in the region has been in Slovenia where earlier this year violent protests took place. The protest’s central rallying cry was about the death of a 20-year-old girl who died of a brain haemorrhage allegedly caused by the Johnson&Johnson vaccine. About ten thousand people rallied in Ljubljana where they marched in the city center and blocked highway exits.

The government responded to the protests with major restrictions on the right to public gathering. Ahead of the EU-Western Balkans Summit, the government for the first time in history activated Article 9 of the Law on the Tasks and Powers of the Police, limiting the movement of the people in public places. When anti-vaccine protesters gathered despite the restrictions, police used tear gas and water cannons on the public.

Despite a late start, Kosovo recently caught up with neighboring countries in their Covid vaccination rate. The vaccination campaign kicked off in late March with Prime Minister Albin Kurti publicly receiving the first dose of a shipment of AstraZeneca vaccines. Despite the country’s recent successes in vaccination, anti-vaccine protests and conspiracies are spreading in Kosovo as well. A vocal person in the Kosovar online anti-vaccine world is Arianit Sllamniku, a German language teacher.

“Social media plays a big part when it comes to conspiracy theories on vaccines and people’s decision to not get vaccinated.”

“Me and my family started the protests because we didn’t agree with the government decision to open gyms and coffee shops while keeping the educational facilities closed,” said Sllamniku. He started protesting in September and has since led three protests, none of which have drawn much attendance.

“Through the post I made on Facebook about the protests in Prishtina, people started to show their support and joined us,” said Sllamniku. 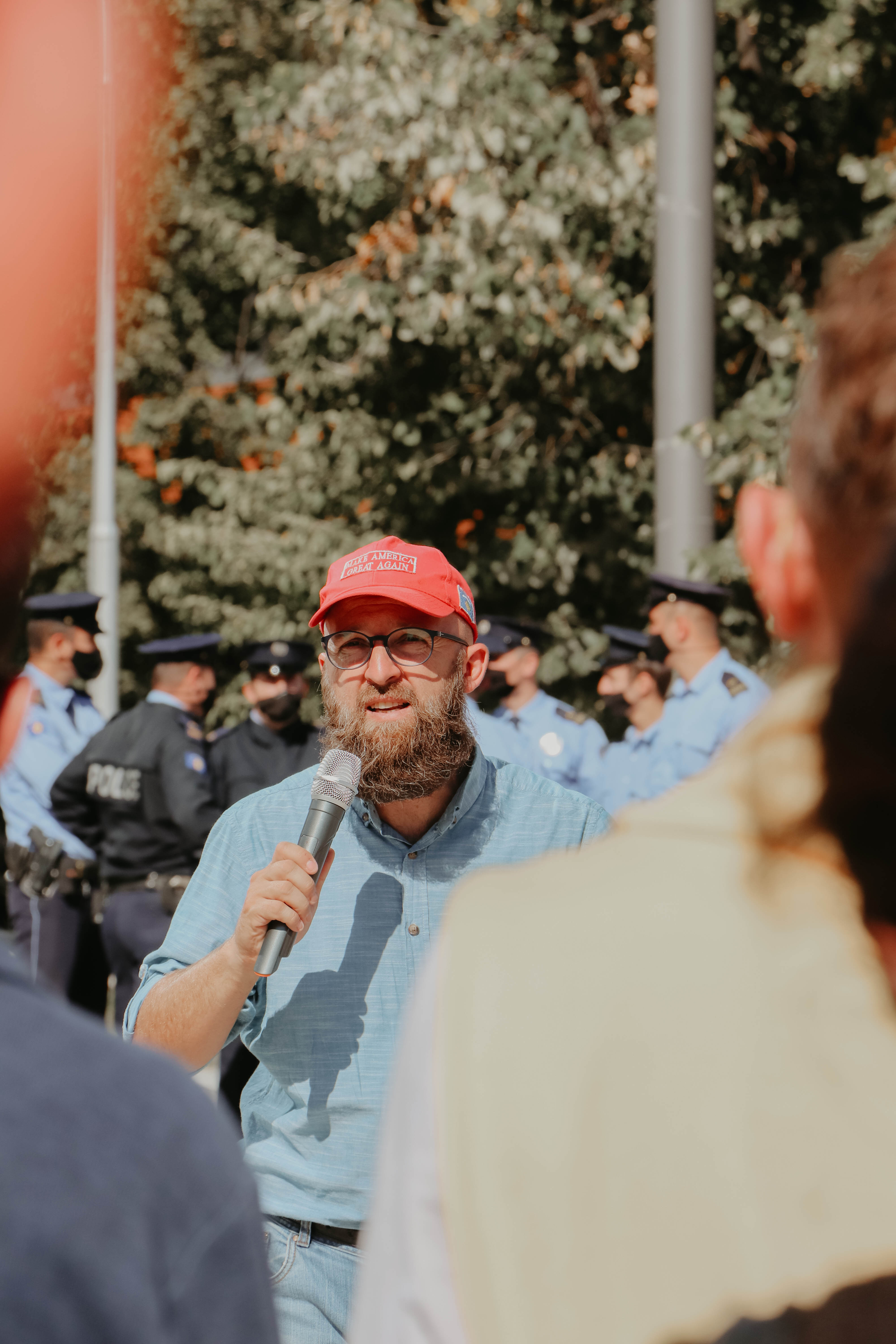 Like-minded people together created a Facebook group called “Free Citizen,” “Qytetari i Lirë” in Albanian, which has over 600 members. Facebook recently blocked Sllamniku for ten days for spreading posts about vaccines that violate the social media platform’s misinformation policies.

Youtube recently announced they will remove videos and channels associated with anti-vaccine content, but Facebook’s struggles to manage non-English web content calls into doubt whether this decision will have effects in the region.

After being blocked a few times, Sllamniku has started to consider other social media platforms. “Telegram is one of the other alternative platforms that has no restrictions that apply on Facebook or Twitter,” he said.

Zoran Stevanović, one of the main organizers of the protests in Ljubljana, instead of turning to Telegram, has formed a new political party called Resnica, which means “The Truth.” Stevanović is a former police officer, businessman and member of the far-right nationalist party Slovenian National Party.

“We have been ruled for 30 years by the same project, a destructive politics of corruption and a policy of false divisions that separates people,” Stevanović said to K2.0.

Stevanović has called the pandemic “a criminal project” and has been detained on two occasions for incitement. Despite this, Stevanović managed to get a meeting with the president of Slovenia, Borut Pahor, where he made a number of inflammatory demands. Pahor shortly ended the meeting.

Stevanović was recently photographed with Ivan Vilibor Sinčić, a Croatian member of the European Parliament and vocal anti-vaxxer. Croatian and Slovenian anti-vaxxers have been cooperating across borders, something clear on social media as well; many Slovenian anti-vaccine Facebook groups routinely put Serbo-Croatian subtitles on their content, and messages of support in the comments section can be seen from across the region.

It isn’t just vaccine producers, China and the World Health Organization that are on anti-vaxxers’ list of proverbial enemies; many also have their aim set on the media. “The regime’s main media are blocking us, or reporting about us negatively,” Stevanović complained.

Damjana Bakarič, once a journalist in Slovenia, and now a “researcher into human psychology, emotion and soul,” calls on people to not follow mainstream media. “We have enough of this bullying and negative energy produced by the media,” she said, adding that the “global predatory elite is to blame for the pandemic.” 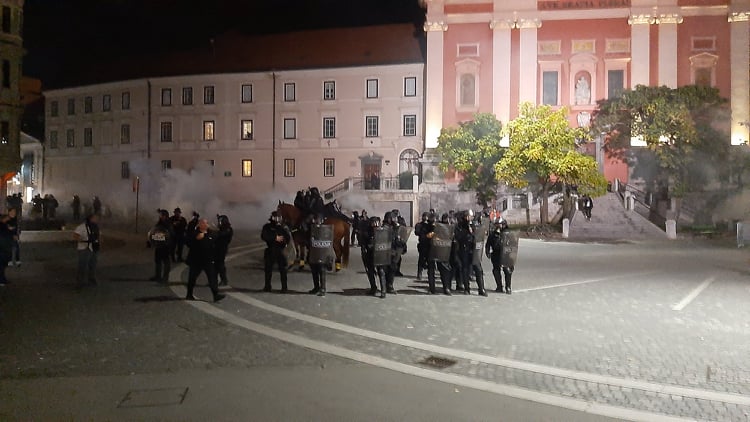 The right-wing government in Slovenia used anti-vaxxers’ activities to curb freedom of gathering and to use excessive force against protesters. Photo: Courtesy of Gorazd Rečnik

During the protests in Ljubljana, protesters stormed the public broadcaster and many journalists have reported that they have been attacked during protests.

In response to such acts, the Slovenian Journalists’ Association released a statement saying, “We call on everyone to respect the work of journalists on the ground and not to threaten them.”

According to Aleksej Kišjuhas, there are many different reasons people join anti-vaccine movements.

The media was also a target of the protests in Zagreb, where Anita Šupe, member of the initiative Rights and Freedom, darkly intimated that, “the mainstream media are covering up the truth, reversing the facts and intimidating us. They are keeping people in ignorance and fear in order to manipulate.”

“The anti-vaccine movement is not some organized and unified movement, but it is a diffuse heterogeneous ideology that spreads like a wildfire because it strikes where people are weakest — the emotions,” explained Serbian doctor Srđan Lukić, who often expresses his concerns about anti-vaxxers in the region.

“Some people are uninformed or misinformed,” said Kišjuhas, “some are afraid of side effects or needles, some have no confidence in the health system or the government and then there are some that truly believe in conspiracy theories, microchips, or the ‘pharmaco-mafia’.”

He emphasizes that processes of identity and community building are essential to understanding how the anti-vaccine groups form and are sustained.

“People often make opinions influenced by respected individuals or people they trust within personal social networks,” said Kišjuhas. “If these individuals are anti-vaxxers, they will raise doubts about vaccines in many.”