The parallel lives of crows

The segregation of blackbirds mirrored that of humans in Gjilan during the 1990s.

My father moved to Gjilan from a village in the mountains near the town of Kamenica about 50 years ago. I hadn’t been born yet. The neighborhood he moved to, and in which I grew up during the ’80s and ’90s, is now called Dardani 1. But before that it was called Gavran, the Serbian word for crow. It was a fitting name, as the birds lived alongside us. Our neighborhood was their ecosystem.

Across our street lay many wide meadows full of birds and other animals. The fields were used for planting corn, playing football and sometimes even sex, when the grass grew long enough for couples to go discreetly about their business — no need for a hotel room.

There were lots of names for the black birds that lived around us: korba, çafka, sorra. The ones with the white wings that would often congregate close to the small swamp near the Serbian village of Koretishta on the other side of the fields were labelled by the children as “sorra të shkive” (a not-so-friendly way to refer to them as Serbian crows — “shka” is a derogatory term used by Albanians toward Serbs, “shkive” is its plural possessive form). In a few other other villages around Gjilan and Kamenica, there were other small birds, vremça. These were also categorised; the ones that had hair on their heads were identified as “Serbian vremça,” whereas the Albanian ones were “vremça pa kaçketa” (vremça without hats).

Within these flocks of segregated birds, you could see allegories for the abolition of Kosovo’s autonomy, the discrimination against Albanians and their parallel lives, and the revenge taken against the Serbs. You could see every harsh narrative.

There was also an ornithological tale that the grown-ups told us during the ’90s. Word spread about how some Serbs had transported big crows with strong beaks down from Serbia to attack our corn and grains. According to the tale, which was widespread among people in the region, a few Albanians had seen a bus with Belgrade license plates by the well in Perlepnica, a small village near Gjilan. The Serbs had allegedly released the crows from the bus in an attempt to damage Albanian agriculture. People believed it. We had never seen these big crows before the ’90s.

Yes, the interethnic segregation and parallel lives of the ’90s even included the segregation of birds; everything was split into Albanian and Serbian groups. Within these flocks of segregated birds, you could see allegories for the abolition of Kosovo’s autonomy, the discrimination against Albanians and their parallel lives, and the revenge taken against the Serbs. You could see every harsh narrative.

Even as the lot of Albanians in Yugoslavia improved in the 1970s, in Gjilan there still seemed to be a desire for social distance. Albanians moving into the city always seemed to seek out predominantly Albanian neighborhoods. Our neighborhood became dominated by new arrivals from the villages around Kamenica, Bujanoc and in the Presheva Valley. Serbs in the town referred to the new arrivals as “šiptarska buržoazija” (“the Albanian bourgeoisie,” though, again, far from the formal word for “Albanian;” “siptar” is a, derogatory, dehumanising term) and to our neighborhood as Tirana mala (Little Tirana).

Through the problems of ’81, distance became distrust and by the late ’80s relations had become very icy. We no longer greeted one another, we tried to pass quickly whenever we walked past each other’s neighborhoods, and would avoid those streets if at all possible. We didn’t buy each other’s products. Albanians that traded with Serbs were labelled as spies or rats.

As the ’90s rolled in, relations between Albanians and Serbs became directly dependent on what the political establishment dictated. The only contact we had with the Serbs across the fields in Koretishta was in the form of football matches between us, and a few young Serbian farmers who took their pigs out for a walk into the fields. There was also Pera, a Serb in his 60s, who supplied a few Albanian families with cow’s milk. We would usually see him on his bicycle, delivering milk to his customers a few times a week. 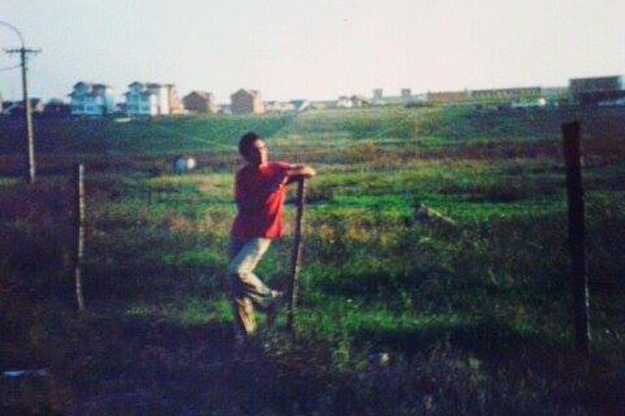 Avni Rudaku, pictured in the fields on the outskirts of Gjilan that separated the city from the nearby serb village of Koretishta. Photo courtesy of Avni Rudaku

The segregation had started in the city center, as well. Traditionally, young people in the town would go out for an evening walk in the streets by the theater and cinema. In the ’80s, these streets belonged to the whole town, Albanians, Serbs, Roma and everyone else. But as the ’90s began, so did the first phase of inter-ethnic segregation. Serbs would walk down the street adjacent to the theatre and hang out in the square, occasionally kissing in public to the bemusement of the Albanians. Albanians would walk down the street on the road.

Then began the second phase of segregation, during which we separated our lives completely. The first bars, Legends and Shpella, were opened in my suburban neighborhood, Gavrani 1. Few now remember that the success of the neighborhood, which still has many bars, is a product of the segregation of the ’90s. An imitation of the city center’s promenade also came to Gavrani 1, and was a new place for an evening stroll. It completed the symbolic ethnic segregation of the city. Albanians had abandoned the multiethnic city center for the monoethnic, Albanian suburbs. Serbs and Roma stuck to the center.

These children endured so much accusation and damnation, and so many labels — “rats,” “traitors.” These “rat children” were emotionally hurt the most by their peers.

Life as a child in Gavrani 1

The number of police cars that frequented Gavrani 1 always seemed to rise whenever we were outdoors playing klikera (marbles). Whenever the police showed up, or whenever we saw the police for that matter, we would run as if they were demons, screaming “Milicia! Milicia!” No one wanted to be present when the Serbian police came to ask where somebody lived.

We didn’t want to tell them where anyone lived. Not just because we would accuse each other, as children do, of being a snitch, but because we’d also learned from the grown-ups that it was terrible to be a snitch. It wasn’t as if the police didn’t know where somebody lived, or as if they couldn’t accuse them of illegal possession of firearms or some other form of “enemy collaboration” whenever they wanted.

They were asking because they had a plan: to ruin the social cohesion of the Albanian neighborhoods. Sadly, it worked. These children endured so much accusation and damnation, and so many labels — “rats,” “traitors.” These “rat children” were emotionally hurt the most by their peers.

There were also people that exploited the panic and terror. They’d yell “Milicia! Milicia!” without having seen the police, only to collect the abandoned marbles after everyone had fled. Fights would break out. Accusations flew around. Everyone would plead innocence, never ratting someone else out, even if they knew who took them.

We didn’t play only with our peers. We also played with grown-ups, people older than 20 even. Many of them were jobless and wanted to kill time. The ones who played with us were similar to the legion of unemployed people that roam Gjilan’s many cafés today — our most prevalent cult. The childhood world and the adult world were much more separated at home with our families, where children and women had their own separate spaces, and were left without a say on many subjects.

I still don’t understand how these grown-up couples would forget their magazines, but by doing so, they ensured that they received the blessings of all the children in the neighborhood. A newly acquired magazine presented a conundrum though: Who would get to take it home? We usually took turns keeping it for a couple of days, or a week maybe. Our social order would occasionally break, but the animosity would disappear when we’d find new magazines together, or when our parents would scold us or beat us after finding them. We were like a group of thieves, unified by sharing the loot equally.

I remember when our Serb peers would come to play football. There were so many dilemmas: Should we play with them or not? If we did, what would happen if we beat them? Could they take revenge simply because they are Serbs, with their police and power? Some of us thought that we should not commit fouls, as then they could accuse us of something. There was a lot of fear, but nothing would ever happen. We would play, have fun, and make fun of each other for being afraid. But whenever one of us scored, there was a sense of unease; we may have contributed to a victory we weren’t sure we wanted.

It is now 2016. Parallel lives continue in Kosovo, in both Albanian and Serb majority municipalities. Gjilan’s city center is now completely Albanian. There are bars by the City Theatre, which are frequented mainly by actors, municipality officials, and people waiting for some sort of public administration document. However, across the street from the theatre, there is now no hangout spot for young people. There is no nightlife location like the ones that existed during the ’80s and ’90s.

The city also does not have many Serbs left, maybe less than 100. It is said that there were as many as 18,000 before. One thing is certain: There used to be a lot more. Gjilan has been cleared of Serbs, maybe not by a written document, but through war. Many Serbian homes were abandoned, sold or burned. Other Serbian civilians had taken up weapons and checked vehicles in the city center during the war. Today, they are afraid to return, some due to alleged war crimes, others due to fear of danger and reprisals.

I still see some elderly Serbs in the city, usually at the closed market on one of the streets in Varosh. I also see my peers locked away in the Serbian village of Koretishta. We never go out for drinks in the city’s bars, where we could see one another, or simply share a common space.

We still need more time to eradicate all the remnants of the ’90s. The blackbirds have completely disappeared, the fields that were their home is now filled with Albanian houses. My neighborhood is now almost connected to Koretishta. We no longer segregate birds on ethnic lines; now we have a segregated market for the elderly Serbs of Varosh. It’s near the theatre and the much bigger Green Market, which is exclusively used by Albanian merchants. I hate every similarity this modern era shares with the ’90s, however cosmetic the parallels may be.

The Ahtisaari Plan and the decentralization of power along ethnic lines in Kosovo has done nothing to help the city’s divisions. It has only continued a life of ethnic ghettos, where everyone feels content in their monoethnic municipalities. The parallel lives of the ’90s have continued almost unaltered. I would love to see a city of interdependence, one of integration and interaction. I want acceptance and integration instead of tolerance. We need time to ease the pain of the past, but I don’t want to see the separation of Albanian and Serbian crows in my city anymore. We are all alike. We have a universal request: We want to be happy. It is that simple.K