To save or destroy it all, in solidarity - Kosovo 2.0
Blogbox | Arts

To save or destroy it all, in solidarity

Reflections from the curator of a 3-year project at the Skopje Museum of Contemporary Art.

“The city must therefore be designed as a flexible bridge between the constantly developing technological apparatus of civilization and its unchanging human factors. It needs a “transformer” to convert the scale and speed of man’s equipment down to the scale and speed of man himself; it also needs a “vessel” dimensioned by walking distance, to contain both old and new manifestations of the human spirit.”

On July 26 the Museum of Contemporary Art – Skopje ended a 3-year project reflecting on its own collection with an event titled “Utopian Urbanism, the Global City and Skopje.”

The date is significant for Skopje. On July 26, 1963, at 5:17 in the morning, an earthquake destroyed about 80% of the city. Over 1,000 people died. Exposed like an open wound to the extreme July heats, the city had to be reimagined and rebuilt from the ground up. Its memory was lost and modes of living had to be reimagined.

For over five decades, on July 26, the city has marked the day with events that celebrate solidarity. In the midst of one of the most challenging periods of the Cold War, the world, despite military and political conflicts, came together to help Skopje and its residents. In less than a year, more than 80 countries contributed to what would later be known as the “City of International Solidarity.” This solidarity project is still regarded as one of the shining examples of internationalism.

The reconstruction of the city was unprecedented. With international support and funding, the Skopje Urban Plan Project was established, a United Nations assistance program “unlike any other operation of its kind ever undertaken,” according to the document from 1970. The goal was to assist local authorities in replanning the city for the future.

Alongside international efforts to rebuild Skopje, some local artists and art historians called upon the solidarity of artists world-wide to support efforts to set up a contemporary art institution. Through the efforts of the Italian section of the International Association of Plastic Arts, a call for solidarity with Skopje was announced at the association’s congress in New York.

Gifts of art started arriving in the city, from Picasso and Calder, to Hans Hartung, Bridgit Riley, Vifredo Lam and many more. A one-of-a-kind international art collection was formed that was unlike any other museum at the time, as most art collections suffered from the political divides of the Cold War. The museum’s art collection became a social space where art from both sides of the Iron Curtain could come into conversation. 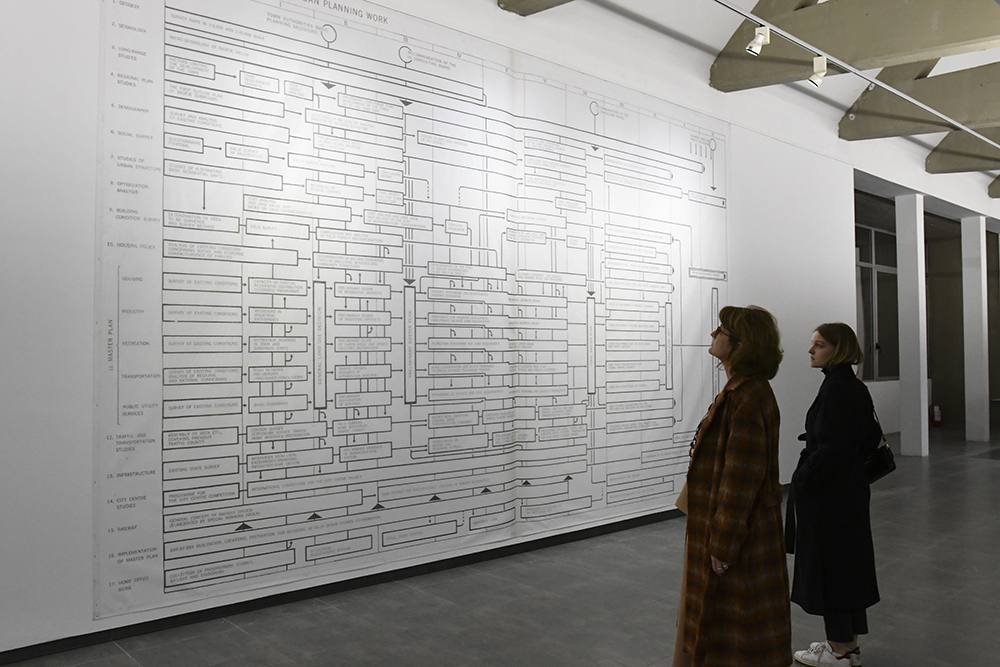 At an exhibition at the Museum of Contemporary Art — Skopje. Photo: Tomislav Georgiev.

One of the central exhibitions from the museum’s recent period of reflection was “Skopje Resurgent,” which chronicled the formation of the museum collection. By looking at a solidarity system that once rebuilt a city from the ashes in a single year, set up a human scale urban environment in 10 years and bridged geopolitical rivalries to create artistic encounters for the common good, the exhibition traced possibilities of repair — social, political, artistic — for the present.

The “City of International Solidarity” has recently become known as the “Capital of Kitsch,” a city where for the last three decades public space has been swallowed by corrupt city authorities while at the same time becoming a city with some of the worst urban air pollution in Europe. As a curator, my task was to open a discussion about our relationship to the international solidarity of 1963 as a way to think through what opportunities for solidarity exist today.

What are the new forms of solidarity our devastated cities need?

To close “Skopje Resurgent,” we published a catalogue bringing together reflections from scholars and writers on the Museum’s collection and also hosted two public lectures.

The first lecture was by Ana Ivanovska Deskova, a lecturer in the History of Modern Architecture at Skopje’s Faculty of Architecture, and the second one was by Saskia Sassen, a scholar working on globalization, immigration, global cities, network technologies and changes in the liberal state that result from current transnational conditions.

The main questions we asked together were: What are the new forms of solidarity our devastated cities need? How can we shift the focus to the common good and develop novel, future-oriented spaces of solidarity production? What practices will generate new ways of being and thinking in common, not only within art institutions, but at the level of the collective? 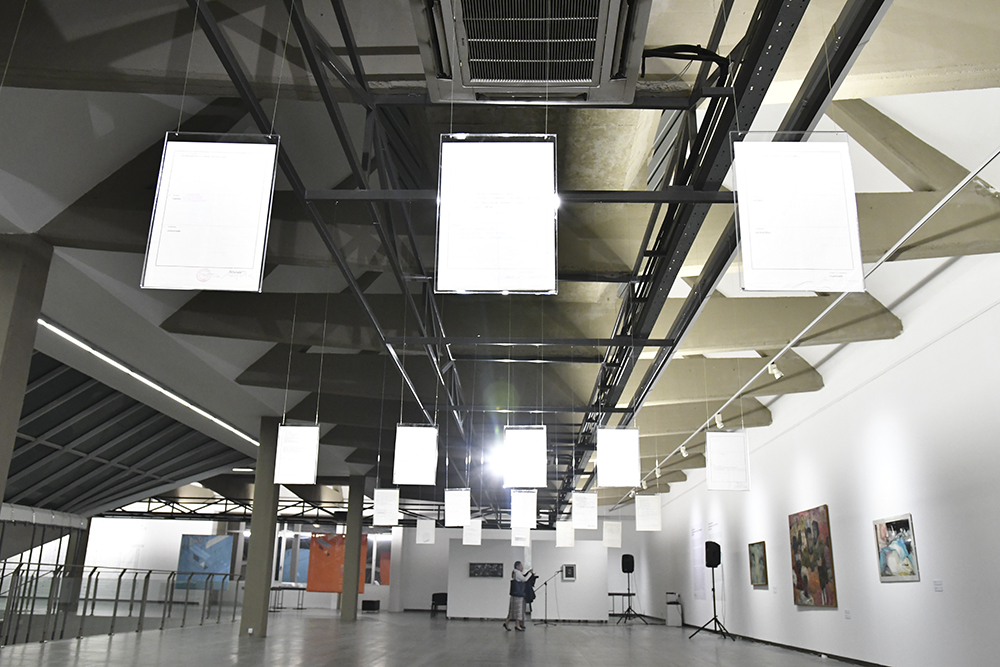 At an exhibition at the Museum of Contemporary Art — Skopje. Photo: Tomislav Georgiev.

Art historian Charles Merewether guides us: “the archive is not one and the same as forms of remembrance, or as history,” he writes. “Manifesting itself in the form of traces, it contains the potential to fragment and destabilize either remembrance as recorded, or history as written, as sufficient means of providing the last word in the account of what has come to pass.”

His words remind us that retracing the past through archives is a potential tool for exploring the gaps of official histories, offering new readings and possibilities.

Thus, the methodologies we employed had to examine the archives through the lens of struggle, keeping in mind the reshaping of society that was occurring during the moment in which they were made. At the same time we tried to search for the enduring aspects of these gestures of solidarity in contemporary culture and politics.

Our extended debates made several points clear. Our responsibility nowadays in museums and in public and collective art institutions, as well as in city institutions, is not only to memorialize the past or to preserve and protect the objects, the material cultural heritage inside the depots. Our responsibility is also to search for cracks in the official narrative and to retrace relationships that made collective action possible among artists, institutions and communities. It is through this retracing and critical reflection that new knowledge is formed.

This is the only way to free the archive from the Museum, so as to disrupt self-historization and the reproduction of linear narratives, and instead to propose new readings and new relationships, thus creating new political possibilities. These are the processes and types of knowledge that we need to nurture if we are going to develop systems that allow for the flourishing of life — human and nonhuman — today and in the future.

Instead of this, we as a society are witnesses to the last days of this city, this region, this planet, creating future archives of the solidaritistic project of planetary self-destruction.

The conclusion, no matter how tacky it may sound, is simple. We will either save or destroy it all, in solidarity.