Calls to weight support in favor of sectors hit hardest by pandemic.

In recent months, Jeton Latifi has mainly been working on the renovation of his hostel in central Prishtina. He has had plenty of time to do so since his hostel has had barely any guests this year.

Since 2016 when it opened, Hostel Oda has played host to hundreds of international guests visiting Kosovo. But, due to the pandemic and measures preventing the spread of COVID-19, it has remained closed for most of the year.

Among the first measures to be taken by Kosovo’s government to prevent the spread of the virus, was closing the borders and the airport; the vast majority of flights were temporarily suspended, while borders were closed for non-Kosovo citizens. Measures were gradually eased, but the number of visitors remained low, leaving accommodation one of the most affected sectors of the economy.

“The pandemic has affected us the most,” Latifi says. “Initially, the government decided to close the borders, then the same measures were taken in Europe, which practically made tourism impossible.” 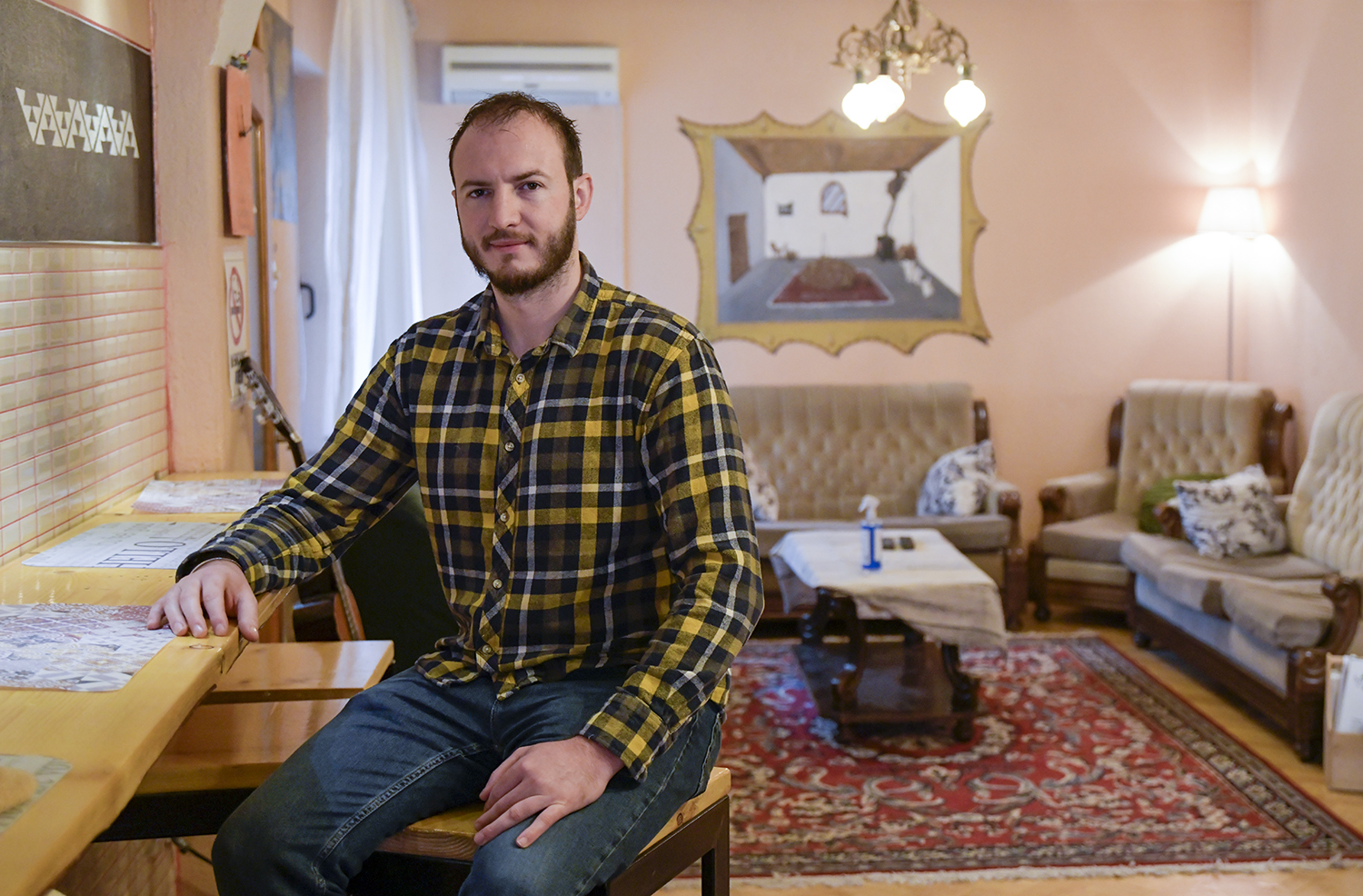 Hostel owner Jeton Latifi says that the financial support provided by the government to date has been completely insufficient given that his business has effectively been forced to close since March. Photo: Atdhe Mulla / K2.0.

As part of the initial emergency response, when the whole country was in complete lockdown, the outgoing Albin Kurti-led government allocated two monthly payments of 170 euros per employee to businesses.

Then in August the Avdullah Hoti-led government decided on several measures to support the economy and subsequently allocated 60 million euros to help compensate the salaries of employees. Businesses, regardless of sector, received a one-off payment of 290 euros for each registered employee.

For Latifi, this did not even come close to covering the financial losses of the year since he employs just one person at the hostel, so the financial support he received was small.

Despite the losses, Latifi has managed to keep his business alive due to the low operating expenses as he owns the property where the hostel is located.

But other hostels have not been so lucky. In July, Azdren Jonuzi had to close his hostel in central Prishtina, Hostel Han, which he opened in 2013.

“We closed the hostel completely and rented the property for offices,” he says, adding that since the borders were initially closed there were no visitors.

Similarly to Latifi, Jonuzi says that the support from the government was insufficient to make a real difference.

Official data from the Kosovo Business Registration Agency shows that 761 businesses closed permanently during the period between February and October; those businesses previously employed 1,316 people. The highest number of closed businesses were in the wholesale and retail trade sector, followed by manufacturing, and accommodation.

According to the Tax Administration of Kosovo, the economic cost of restrictive measures taken to avoid the spread of the pandemic is estimated at 1.2 billion euros.

The economic recovery package approved by the government in the summer — including measures to facilitate private businesses’ access to finance, ease the tax burden for businesses and increase subsidies for agriculture — was worth 365 million euros.

However Berat Rukiqi, head of the Kosovo Chamber of Commerce, says that the actual support received by businesses to date has been limited. 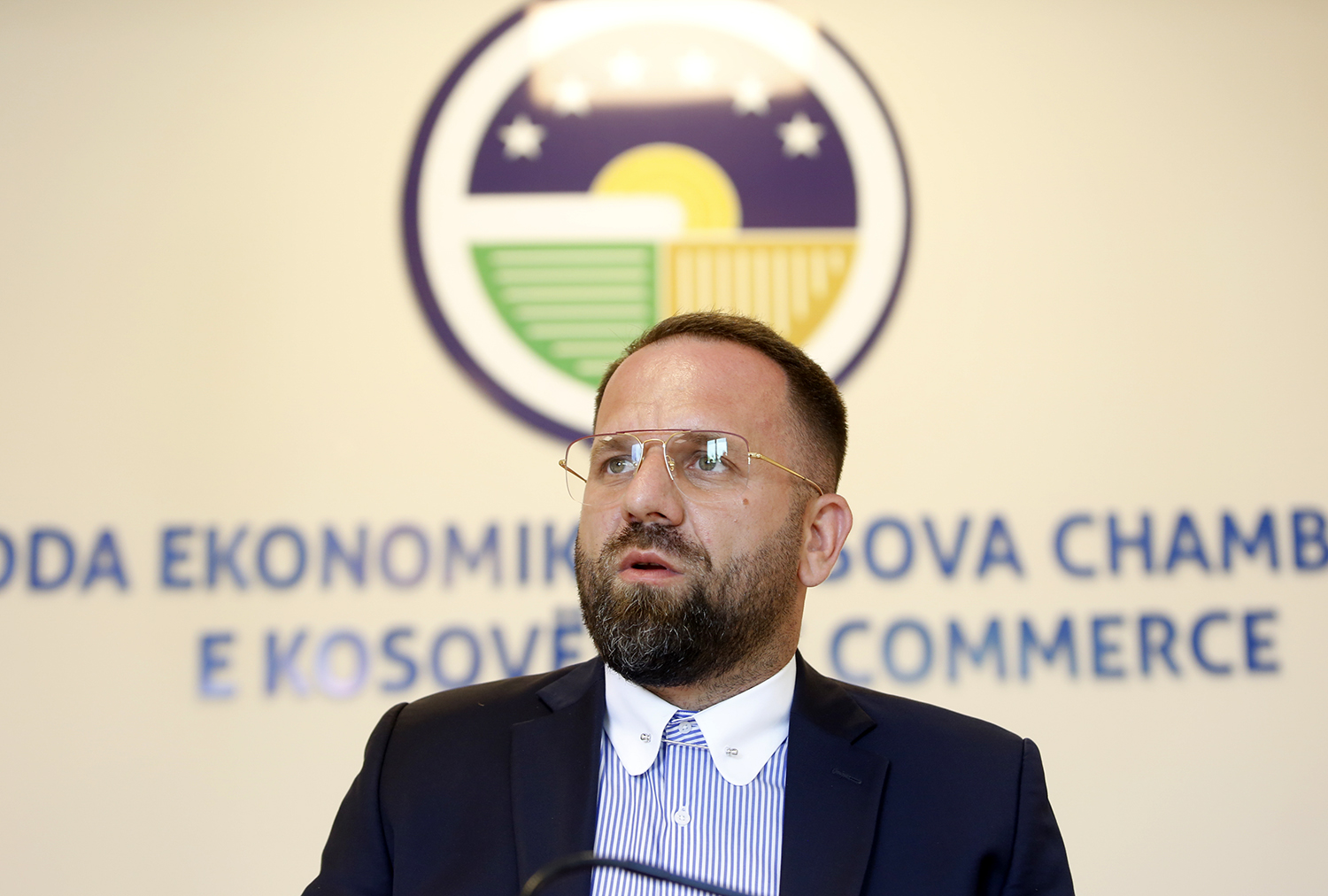 Berat Rukiqi, head of the Kosovo Chamber of Commerce, says that the economy has taken a huge hit this year but support available for businesses has been limited. Photo: Atdhe Mulla / K2.0.

According to a recent analysis conducted by GAP Institute, the financial support provided to businesses by the government to date is “insufficient” considering the economic damage caused by the pandemic. GAP also states that the way in which financial support is allocated between business sectors should be adjusted according to need.

Based on Tax Administration of Kosovo (TAK) data, GAP notes that there are significant differences in turnover declared by businesses in different sectors. According to GAP’s analysis, the economic sectors that have seen the highest decline in income are the arts, entertainment and recreation industries (-79%), real estate (-44%), transport and storage (-43%), and accommodation and food service (-37%).

Meanwhile Rukiqi says that taken as a sector in itself, accommodation is one of the most affected parts of the economy, with around a 90% decline in turnover compared to last year.

Based on GAP’s analysis, there are also sectors that have shown an increase in turnover during the pandemic. The highest increase has been in the information and communication technology (ICT) sector, which has witnessed a 12% increase.

Vjollca Çavolli, executive director of the Kosovo Association of ICT (STIKK) says that her body has conducted two analyses to assess the impact of the pandemic on this sector. The first, carried out in April, found that the quantity of services and products from this industry decreased, but the second analysis, in July, showed the situation had changed.

“After [three months, in July 2020] we made an analysis that was very positive, since international partners had tripled their demand for our companies,” Çavolli says. “Consequently, the effect has been very positive in 95% of IT companies.”

Çavolli says that ICT companies were supported financially by the government in the same way as businesses in other sectors. Similar to the support received by Hostel Oda, the government paid 290 euros for each employee.

At the start of December, Kosovo’s Assembly finally voted to approve the government’s Law on Economic Recovery, following months of failed attempts. The Law includes a 200 million euro package to help support businesses affected by the pandemic and its impacts, with half that money set to come from Privatization Agency of Kosovo (PAK) revenues.

Article 11 of the new Law on Economic Recovery sets out the broad eligibility criteria:

“All businesses that have been closed or have had difficulties in regular functioning during the pandemic period, but that have been active and registered in the register of Tax Administration of Kosovo before 29 February 2020, shall be supported financially from the budget of the Republic of Kosovo with monetary funds in order to cover the operational expenses in the amount of two hundred million Euro.”

According to the Ministry of Finance, the amount of 200 million euros will be included in the draft budget for 2021, and an operational plan for implementing the scheme — including detailed eligibility criteria — is being prepared by a working group established by the government.

The upcoming snap general election, now due in early 2021, adds a layer of uncertainty and potential delay to the functionalization of this financial support, although it is not currently clear exactly what impact it will have.

“The Government should define the industries with the highest declines and target them with funds that are proportionate to the damage suffered.”

Meanwhile Rukiqi, from the Chamber of Commerce, says that there have been requests from some of those businesses most affected to date, for the support — when it arrives — to be weighted toward them.

The GAP analysis also notes that if the uniform approach to supporting businesses used to date is continued, it may make economic recovery difficult  for the country’s key and strategic industries.

“GAP Institute recommends that the Government should define the industries with the highest declines and should target those with funds that are proportionate to the damage they have suffered, such as with policies that particularly affect their recovery,” the analysis concludes.

Hostel owner Latifi agrees that support should be targeted and focused on those sectors hardest hit. He adds that if the current situation continues, many more businesses will be forced to close — including his.

“It’s useless to reimburse the salary while the business is still closed,” he says.K