A bloody year for workers

On Saturday, October 6, Milazim Bajraktari from Istog, went to his place of work on a construction site in the Arbëria neighborhood in Prishtina. But, that day he didn’t finish his shift.

Around 10 a.m, in unclear circumstances, Bajraktari fell from the building, dying there on the site. His death was the 18th case of a worker in the construction industry dying in the workplace in the last 10 months. The youngest was a 17-year-old boy who died in a factory producing construction material, while the oldest was 71-year-old Ragip Syla, who died while cleaning a construction site. Over the course of the year so far, 98 accidents have been recorded, with 80 cases of workplace injury adding to the 18 deaths.

Non-governmental organization “Beyond the Wall” reacted to Bajraktari’s death immediately, calling for a protest under the motto “Buildings are yours, life is ours.” Yesterday, (October 9), at Zahir Pajaziti Square in Prishtina, around 100 protesters gathered, finding 93 yellow work helmets on the street. The helmets symbolized every worker in the construction industry that has died in the workplace in the last five years.

Silent, and in a row, one by one protesters put the helmets on their heads and headed toward the Government Building. Once they arrived, they placed the helmets on the fences that surround it, so that officials would “see the enormous number” of construction workers dying in the workplace. 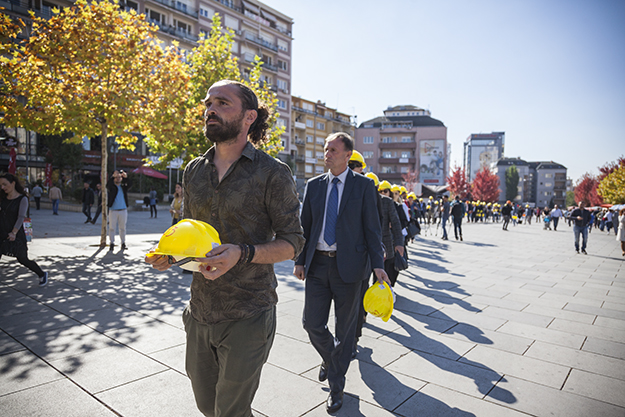 One of the organizers behind the protest, Kushtrim Mehmeti, told the media that more helmets would be added to the fence in the event of more workers’ deaths. Photo: Majlinda Hoxha / K2.0.

Kushtrim Mehmeti, one of the organizers of the protest, said that they want “to at least be the voice of the dead workers.” He warned that if the helmets were to be removed from the fences, anyone that did so would be “complicit in workplace deaths.” Further, he said that if other workers continue to die, a helmet will be placed for each of them.

Commenting on the situation of construction workers, Mehmeti described it as a “state of war” and called on the government to take concrete measures. Another request addressed to the government was to “provide a retirement pension for the families of dead workers.”

Krenare Hoti also said that she was protesting in order to be the voice of dead workers. During the march to the government building, she told K2.0 that construction workers are “the most oppressed class in Kosovo.” She said that she feels this because their “life is not a priority … and this is proven by the incidents and deaths that are taking place.”

Hoti was disappointed by the participation of so few protesters and insisted that, apart from the “lack of response of the institutions, what is also concerning is the lack of outrage from society.” She believes that pressure should be placed on institutions and that society should be aware of the need to take steps in order to provide the basic right to work safety. 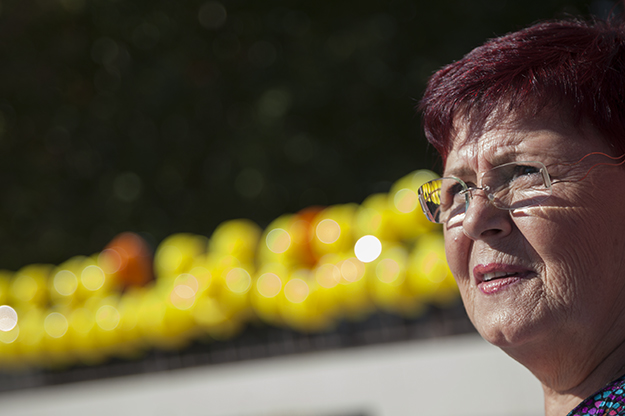 Protester Nazmie Sejdiu called on deputies in the Kosovo Assembly to raise their voice and ensure safety for workers. Photo: Majlinda Hoxha / K2.0.

Nazmie Sejdiu, with tears in her eyes, says “enough.” The protester from Prishtina says that these workers are “dying for a mouthful of bread.” She directs her frustration to the three senior state leaders; Prime Minister Ramush Haradinaj, President Hashim Thaci and President of the Assembly, Kadri Veseli. According to her, it is shameful the way in which workers are dying, and that “there is no state and no justice.”

Sejdiu had an appeal to Kosovo’s deputies: “Please raise your voice, please secure life for the people.” She puts the lack of institutional response down to “neglect because of their personal interests.” 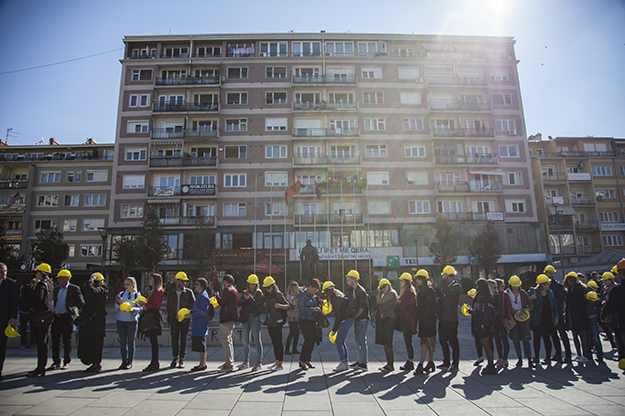 The only state official at the protest was deputy of the Kosovo Assembly, Frashër Krasniqi. For him, the situation is “unacceptable and incomprehensible,” and he asks how many deaths must occur for the laws to be applied.

In the last three European Commission Progress reports, the need to increase the number of labor inspectors has been highlighted, with at least 65 being required. Currently, 42 are employed. Chief Inspector Basri Ibrahimi told K2.0 earlier this year that the Labor Inspectorate was lacking capacities and that more inspectors were needed.

Earlier this year, Koha Ditore reported that of 81,000 registered businesses in the construction industry, only around 8,000 had been inspected in 2017. According to data acquired by K2.0, of 128 fines issued by the Inspectorate in the first six months of 2018, only 6 were executed. 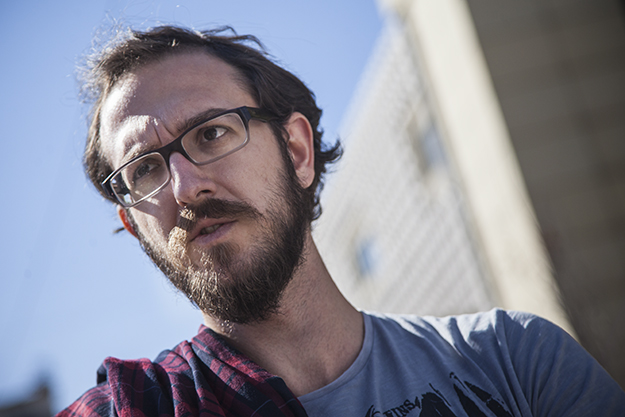 Rinor Mehmeti joined the protest but was cynical about whether it could incite the government to take action. Photo: Majlinda Hoxha / K2.0.

Although he had come out to support the protest, Rinor Mehmeti did not believe that it would spark the government into action. “If they had wanted to do something, something would have been done already,” he says. Besides the neglect and the lack of professionalism, he believes that corruption is one of the factors behind this issue.

Mehmeti highlights that “this year was the worst” in terms of workers’ deaths. Trying to analyze the situation, he says “the idea that we are protesting against the deaths of workers shows at what point we have arrived.”

According to Mehmeti, the situation should be improving, not the contrary, and this proves the lack of will in the country’s institutions. He believes they can do more, by making “stricter laws, not compromising with irregularities, more frequent inspections, punishments, and for such cases to be given priority in the courts.” But he is convinced that institutions will not act.

Hope for Mehmeti lies in the workers’ reaction. “Workers should be organized, taking radical action; strikes, work boycotts, taking the streets,” he said. “Because when you hit bosses and the state in their pockets, they start paying attention.” Mehmeti believes that workers will soon revolt and then there will be improvements.

While this year is not over yet, let’s work to avoid the deaths of workers in the workplace and to not increase the number of helmets on the fence of the government’s garden.