A brief history of a hero made of coal and stars - Kosovo 2.0
Blogbox | Albania

A brief history of a hero made of coal and stars

Sometimes you have to go underground to get to outer space. Driant Zeneli’s site-specific installation And Then I Found Some Meteorites in My Room (2018) takes us to an ether, but one firmly rooted on land. The view from above and the view from below meet in the middle in Bazament, a new basement-level project space in Tirana.

The installation is an exploration of individual projections of utopias. Visitors enter this middle world through a narrow hallway, which leads them past a door covered with a black curtain from which red light emanates; then through a tight passageway between a wall and a column, and onto an angled seating platform. It is from here that visitors encounter the protagonist of the installation, Bujar. 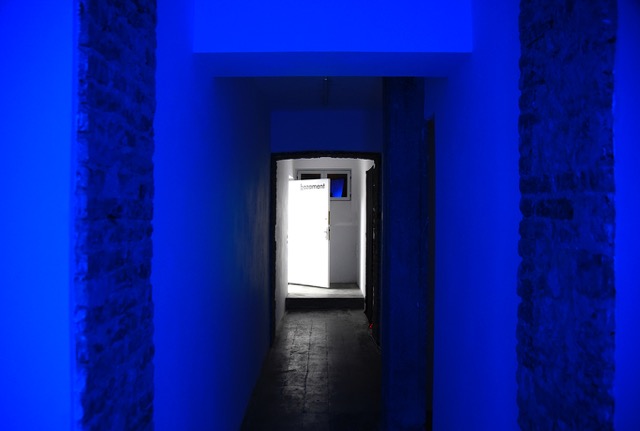 Featured on the primary screen of the three-screen installation, Bujar is but a small, single figure walking on a charcoal black moonscape, shot from above. Musing on planetary forces and factoids, Bujar is in fact not pacing on the moon but on the grounds of the Communist-era metallurgical complex in Elbasan, Albania, where he has worked his entire life. 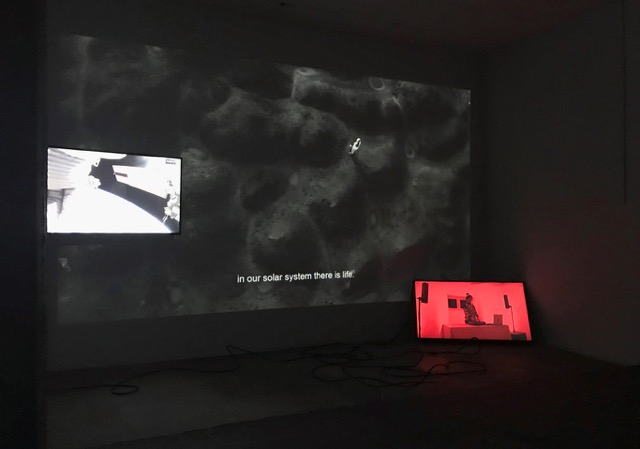 On a second screen, he is joined in another space and time by his daughter, an employee at an adjacent steel plant, who is the exhibition’s DJ, her red-hued opening-night set streamed from the next room. The final character is the eye of the International Space Station (ISS), which beams live into the space — an occasional hand or finger adjusting the camera or tweaking something in the inhabited satellite.

Bujar’s voice meets his daughter’s electronic music. He speaks of stars, alien encounters. He describes planets and recites the speed of light by heart. He talks of a children’s sci-fi book — the first that made an impact on him — in which there was a world without pollution, with clean air, people flying, living underwater. “Are we the ones harming Earth?,” he asks. The dark, dense surface he walks on seems to answer the question. But the poet Bujar is optimistic: There will be a new sun, a new world, a new life for humans, he concludes.

Bujar walks in infinity loops. He is space anchored to Earth. A dreamer passing through magnetic fields. Yet despite his love for the extraplanetary, and his vision of the future, the strength of the steel keeps him in this dark landscape. 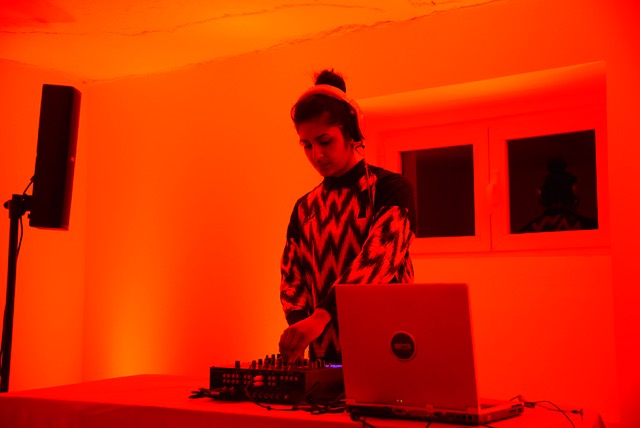 As committed to outer space as Bujar is, we view him from above, looking down at Earth. That downward gaze is echoed by the ISS live feed and repeated again by Flora, Bujar’s daughter, as she adjusts the knobs of her sound mixer.

The persistence of the downward gaze produces a portrait of alienation across space and time, across generations. It is as if Zeneli has taken us underground, tempted us with other worlds, only to remind us that utopias are always produced from a dystopian place.

Dreams emerge only from the other side, and it is Bujar’s imprisonment that produces his radiant optimism. Carried by the cyclical music, we are caught in this feedback loop, from underground to outer space and back again.

The exhibition And Then I Found Some Meteorites in My Room is on view through April 5, 2018, at Bazament.