On the eve of the local elections, I took my camera on a trip to some villages in the suburbs of the larger cities in Kosovo. Nowadays few people see any interest in these places. Neglected and lacking investments, most of the inhabitants have left these villages behind for nearby towns.

Upon taking the road to this village I am welcomed by an old sign of municipal investments in the road that connects Leskovec with the city; almost four kilometers that cost more than 400 thousand euros. Ironically, the road, whose main purpose was to bring the village closer to the city, actually became the way most of the inhabitants used to leave. Only a few of them remained. Over time the plants near the road began to reoccupy it and now the road, which once was the pride of the Municipality of Prizren, has begun to narrow on both sides.

As I entered the village, the barking of a single dog heralded my arrival. Two young boys appeared over a hilltop nearby to greet this stranger.

I first asked them if their father was at home. The two boys told me that I had to come on Sunday to meet him since he was in Prizren.

However, I observed the surrounding village. It was mountainous and green, with some roads leading to the village’s fountain, located almost at its bottom, on the side of a hill from where a large part of the Dukagjini plain could be seen. I could not resist saying over and over again how happy I would be if I had the opportunity to live in this village. An extremely quiet place, the tranquility of which clearly showed that it had been left alone.

On Sunday I came back. On the way I realized that the youth of Prizren came here to have a picnic.

In the village I approached the last inhabited house. There, a man welcomed me with a smiling and warm face, a warmth that seemed to disappear from his face as soon as he realized that I was a journalist.

His gaze constantly went from my camera. Although I explained and assured him of my work, the gentleman, who I will call Hilmi, did not change his mind and asked that we talk anonymously.

“Even if they come, they do not have any reason to ask for my vote, they all know that I do not change parties!” said Hilmi, adding that the road built years ago was really what enabled the residents to leave. However, he pointed out that even before the road was paved, the village did not have many inhabitants.

“Before the road was paved, there were six houses, now I’m left alone,” he said.

According to him, the local administration in Prizren was not interested in the well-being of villagers. A laborer during the day and a farmer at home, Hilmi had already convinced himself that he had to leave as well. In a few months he will move to Tuzsuz, in the outskirts of Prizren. 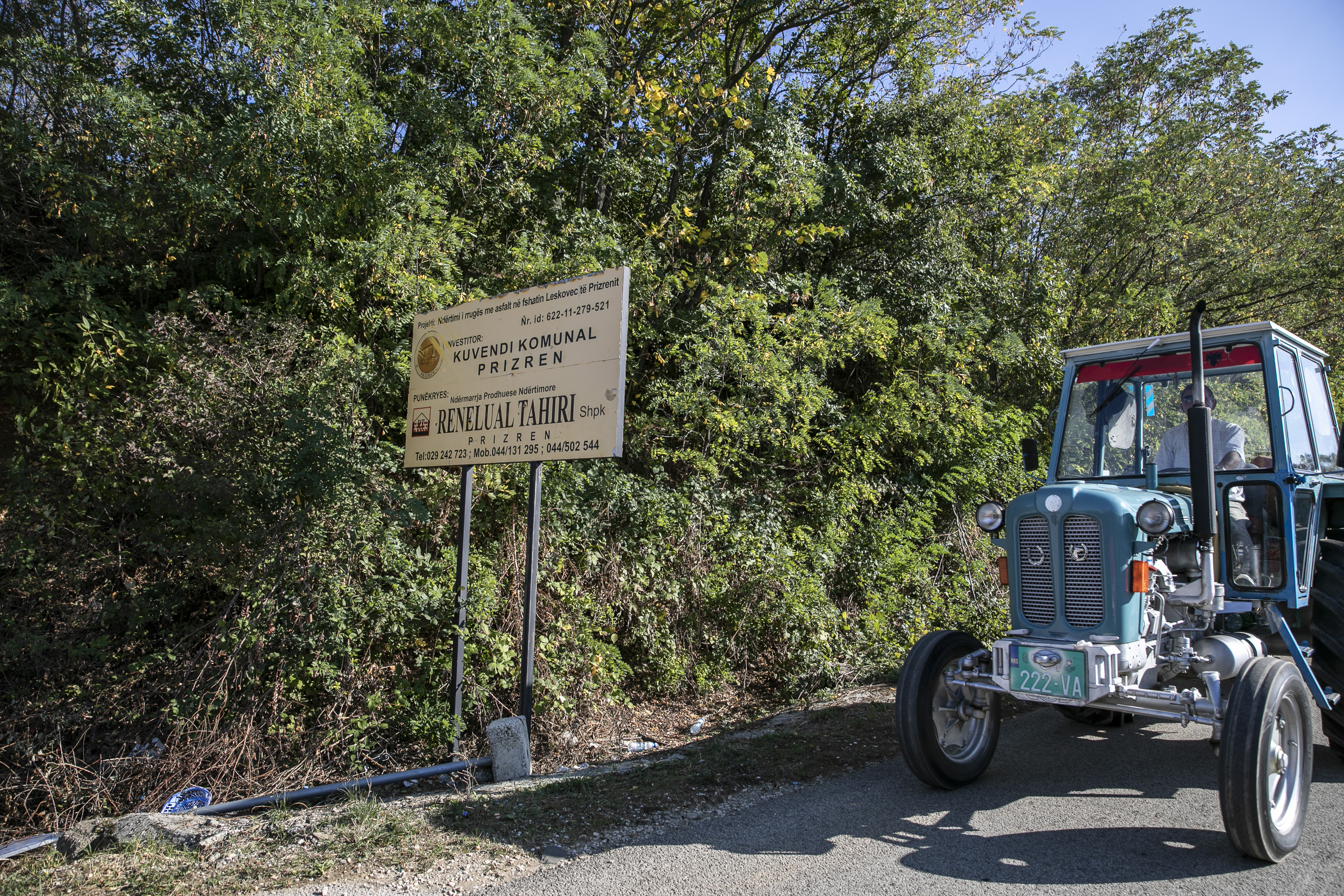 Sign promoting municipal investments in the road to Leskovec. 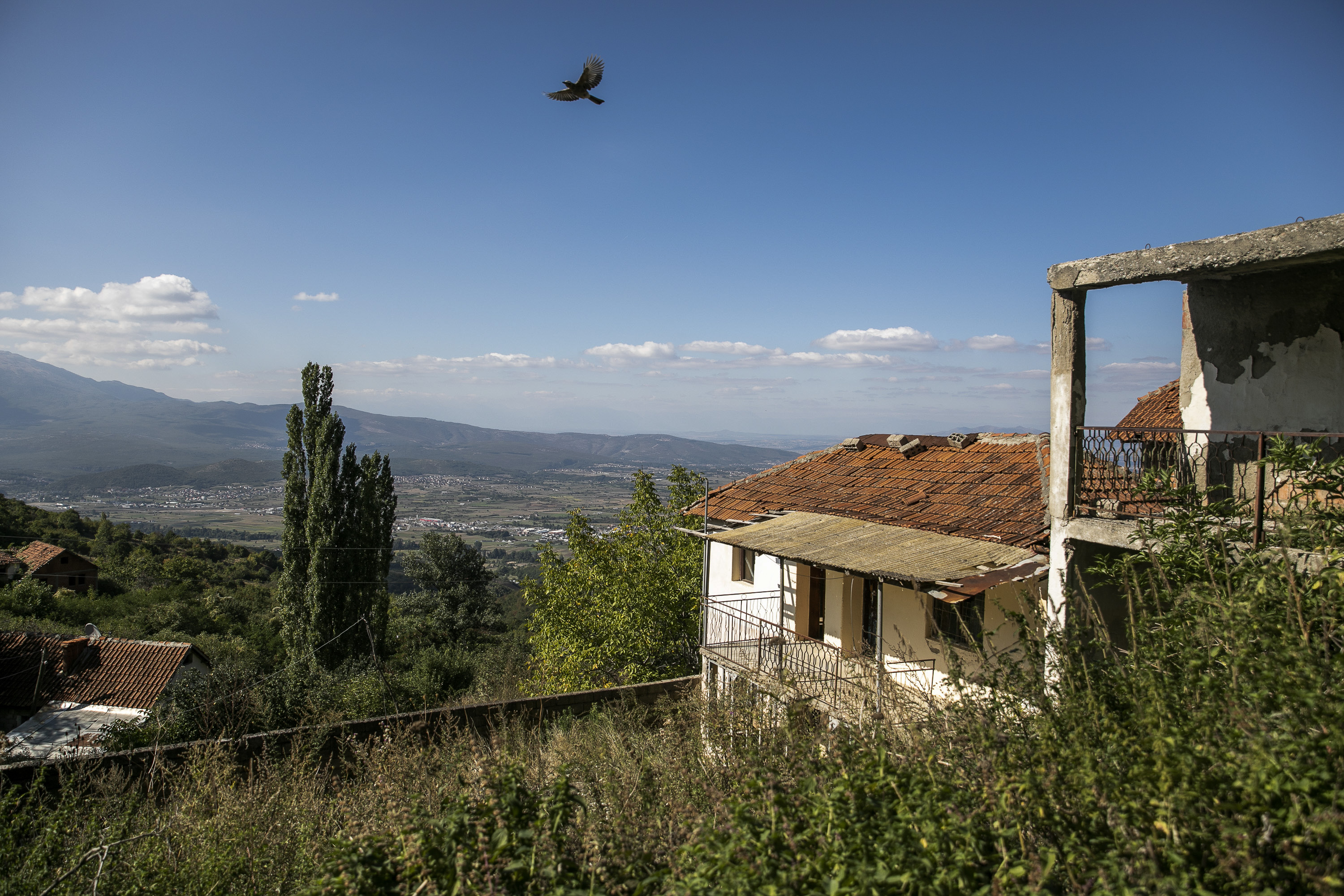 Two young boys walk through the empty streets of Leskovec.

Two young boys walk through the empty streets of Leskovec.

Two boys fill bottles with drinking water from the fountain of Leskovec.

Two boys fill bottles with drinking water from the fountain of Leskovec.

The irony of the roads hit me again as I visited other parts of Kosovo. This time, it was near the village of Zhegrovc, in Gjilan.

The paved road suddenly changed completely, turning into an access road for heavy machinery carrying material for the nearby highway construction project. After the dust subsided and the road cleared, I found my way to the village school. The abandoned yard still had the footprints of children.

The sound of birds chirping was suddenly interrupted by the noise of the highway construction machinery, which had cut the mountain as if it was handmade.

When arriving in Zhegrovc, the first thing I saw was a memorial center that served as a landmark for the village. Zhegrovc is known as the only village in the territory of Gjilan where there was an open battle between the Kosovo Liberation Army and Serbian forces during the war in Kosovo.

As I stepped out of the car, a man approached with a curious look. He introduced himself as Osman Pajaziti, 50 years old, who lived in Gjilan and worked in construction for years. Pajaziti had come to the village to restore his abandoned backyard.

While waiting for the arrival of the excavator man, Osman told me about his native village. As we walked near the abandoned houses, I entered one and could see that there were still signs of gun shooting in the living room. We both escaped from the sun under the shade of a walnut tree located right in the middle of a property belonging to the family of the martyr Pajazit Ahmeti-Paja. There were two war-damaged houses, and next to one was a one-story house with a very clean courtyard still used for infrequent weekend visits.

“They have nothing to come for here, there is no one to beg for a vote, they all have gone, no one is left in the village!” said Pajaziti.

According to him, in the future there may be a return of people to the village as the highway will have an exit nearby. This would significantly bring it closer to Gjilan, perhaps even bringing municipal investments in these areas, something that has never happened since the end of the war, according to him.

A sign marking a water supply point near Zhegrovc.

A sign marking a water supply point near Zhegrovc.

Osman Pajaziti awaits the arrival of the excavator to fix his yard.

Osman Pajaziti awaits the arrival of the excavator to fix his yard.

Signs of gunfire in the living room of an abandoned house in Zhegrovc.

Signs of gunfire in the living room of an abandoned house in Zhegrovc.

The old road to the village and the highway construction site.

The old road to the village and the highway construction site.

A truck carrying construction material for the highway.

A truck carrying construction material for the highway.

Construction site of the highway to Gjilan from Zhegrovc’s abandoned school.

Construction site of the highway to Gjilan from Zhegrovc’s abandoned school.

After Zhegrovc, I left for the village of Gragjenik in Kamenica. As far as I knew, only one resident lived there.

Gragjenik is located almost at the end of the municipality. This time, the irony of the road accompanied me in its own way. I do not know if I could call this journey a trip or an expedition, but when I was passing near settlements along the way I met some very curious glances of people that seemed to say to themselves, “he has lost his way.”

The longer I travelled the road, the more I understood the reason why the villagers left. My little car could negotiate that road, but it was not one I would cross on a daily basis. My eye did not catch any investment in infrastructure whatsoever, it simply seemed that no one had ever even visited it.

The path, which had been formed over the years by tractors of illegal loggers, ran through a canal using some large logs and planks pulled together. A quiet grassy strip in the middle of the tracks touched every now and then the bottom of the car, making noises.

Finally Gragjenik appeared, a village that  seemed extremely peaceful from a distance. It was positioned on a hill facing south like a postcard village, only lifeless.

The houses were all abandoned and neglected, and plants had begun to take over the rooms that once held lunches and dinners, laughter and chatter, the space where once upon a time someone lived. Such emptiness no longer brought any peace, it was frightening. Unlike Zhegrovc, the noise of birds here mixed with the sound of windows hitting their frames.

An abandoned house in Gragjenik.

An abandoned house in Gragjenik.

The road to Gragjenik has not been used for a long time.

The road to Gragjenik has not been used for a long time.

I was expecting more of the same in Sllatina, Podujeva, a point on the map at the end of a long road near the Serbian border.

However, the farther I went from the inhabited areas, the more beautiful the road looked. Pure as it was, it reminded me of the rural roads of French villages. The land was cultivated and gave the impression of a rich region inhabited by generous and hospitable people, but my arrival in the village was nothing like that.

From the first moment I realized that the village was still inhabited, though not all the houses. There was also a station where logged wood was collected for heating. As in other villages, my camera and I were greeted with cold stares.

“There is nothing left here, everyone is gone. You do not have anyone to talk to” were the words of a farmer as he walked away from me and led the cows towards a field of corn. According to him, most had fled the village as the road ended a little beyond, behind a restaurant, after which you are in Serbia.

An abandoned house in Sllatina.

An abandoned house in Sllatina.

Restaurant at the exit of Sllatina.

Restaurant at the exit of Sllatina.

Abandoned classes of school in the village of Sllatina.

Abandoned classes of school in the village of Sllatina.

Places like Leskovec, Zhegrovc, Gragjenik and Sllatina are common in Kosovo, forgotten places by the road to mountain restaurants.

The visits I had in these villages made me think what life would be like in these villages if nearby businesses included more local products or provided work? Or if the respective municipalities made any investment?

Would the inhabitants of these villages consider returning to these areas full of birds, away from the noises of the big cities? Perhaps this is the main problem. In our country, villages continue to be considered backward, but they are in fact traces of our culture, disappearing and neglected.