What can Kosovo learn from the latest developments in Romania? - Kosovo 2.0
Perspectives | Protests

What can Kosovo learn from the latest developments in Romania?

In an evolving democracy, the popular vote cannot legitimize corruption.

After five days of mass protests and nationwide unrest that saw an estimated half a million protesters take to the streets, this Sunday (Feb. 5) the government of Romania repealed recent measures to weaken the law on corruption — which had widely been seen as a move that would pave the way to shielding corrupt officials.

The success of the protests does not mean that corruption will be uprooted or evaporated overnight, or even that the political elite will suddenly become more responsible in the land of Dracula. However, the power of civil resistance against those intending to use the law to defend a culture of corruption can be a powerful lesson, and not just for Romanian politics. Kosovo’s young democracy can also learn from this weekend’s events to its northeast.

The two countries’ governments share similarities. Romania’s newly elected government took office as recently as December 2016 and is led by officials from the Social Democrat party after an emphatic election victory. The Social Democrats won over 45 percent of the vote in December, whilst the second placed National Liberal Party placed second with only 20 percent.

This decisive victory was in spite of events the previous winter, when another Social Democrat led government was forced to resign due to protests sparked by a fire in a nightclub that left 64 people dead, with protesters blaming the government for inaction and corruption.

Analogous to the situation in Romania, the Kosovar government also enjoys a strong democratic mandate from the ballot box, with a grand coalition of the two biggest parties, PDK and LDK, governing the country since December 2014.

Exponents of the two ruling parties have often pointed out that the government’s power in the Assembly, where the government greatly outweigh their opposition counterparts in terms of numbers, is due to securing large proportions of the popular vote in 2014’s election. Many critics have described this situation as leading to the government displaying the ‘arrogance of power.’

The weekend’s protests in Romania revealed Romanian society’s political conscience and a willingness for civic activism that keeps their government accountable. Romanians have shown a strong determination not to allow impunity, even for politicians who have been firmly legitimized recently by a popular vote.

Due to the powerlessness of the opposition in terms of parliamentary votes in Kosovo, attempts were made to change the strategy of the country’s lawmakers by using tear gas canisters to frequently disrupt Assembly sessions that were aimed at passing controversial, government backed legislation. 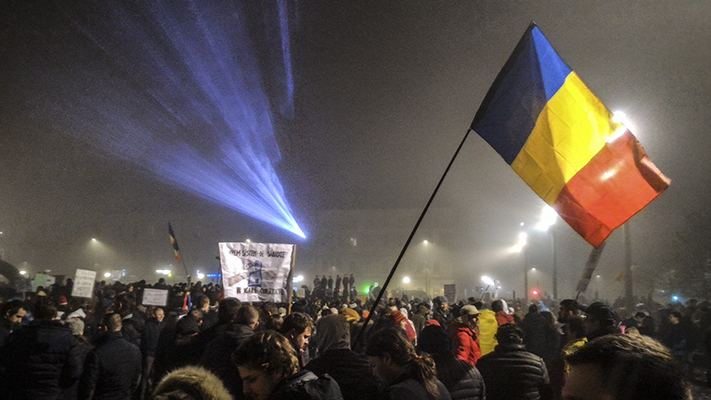 This tension in the Assembly was transferred to the streets of Prishtina, with the opposition calling for popular protests and thousands of people taking to the streets, delaying the passing of legislation pertaining to international agreements and border demarcation.

Kosovo’s political discourse is dominated by these types of issues, those related to sovereignty and tension with its northern neighbor. They are topics that are convenient for both politicians seeking to maintain power, and those intending to seize it. Lamentably though, Kosovo’s young democracy has failed to see protests of the magnitude seen in Bucharest on issues related to corruption, despite the Kosovar public being offered plenty of motives.

A wave of protests erupted in Prishtina, organized by members of civil society. Unfortunately, unlike in cities across Romania over the last few days, Prishtina’s streets saw only a handful of people joining the calls for the resignation of those involved in the scandal.

In the weeks that followed, the protagonist of the wire tappings scandal, Adem Grabovci, resigned from his role as the head of the PDK Assembly group, although he still remains a lawmaker in the Assembly. No concrete epilogue to the scandal was given by the judicial system. An investigation is underway, but with no end in sight.

To Kosovar society, the weekend’s protests in Romania should also be a reflection that combating corruption is a long-term fight and will not be magically resolved by European Union membership. Joining the EU remains one of the country’s main political goals, and is often fetishized as a cure for all of Kosovo’s ills.

However, it is important to reiterate that fighting corruption is a battle that must be fought irrespective of Kosovo’s place in or outside the European Union, as corruption remains an elephant in the room even within the EU’s member states.

When Romania and Bulgaria joined the EU in 2007, many critics commented that the two south east European countries had entered ‘through the backdoor,’ and that Brussels turned a blind eye to overall reforms as a consequence of pressing the geopolitical issues of the day.

This year marks a decade since Romania joined the EU, yet corruption continues to be one of the biggest challenges for Romanian society. According to the 2016 Transparency International index on corruption, Romania was listed 57th out of 176 countries worldwide, scoring only 48 points out of a potential 100. Kosovo meanwhile was placed in 95th position with a score of 37.

Despite the repeal of the controversial law on Sunday afternoon, protests in Romania have continued, and even grew in size on Sunday night, with further protests scheduled for the coming week. Protesters are seeking resignations from the government and speculation is growing that the justice minister will soon be dismissed.

The Romanian protesters have given a strong signal that no matter what the legitimacy of the government’s mandate, preemptive action from citizenry is needed to guard democracy and to keep those in power accountable by leaving no room to create legislation that would make politicians immune from corruption charges.

The protests in Romania also issues an alert to those who constantly talk about the legitimacy of a popular vote while trying to use their power undemocratically, or to serve particular interests. Election results as a democratic principle shall not serve to defend corrupt politicians and wrongdoers. The events in Romania over the weekend is a clear indication of that.K

The protests in Romania centred around two ordinances proposed by the freshly elected government. The two proposals were set to decriminalize official misconduct where acts cause damage of under 44,000 euros, halting any current investigations and preventing any future charges, as well as pardoning a number of convicted criminals.

The government’s official reasoning was to ease tension on Romania’s overcrowded prisons but many critics claimed that it was aimed at overturning convictions placed on members of the governing Social Democrat party, including its leader Liviu Dragnea.

Protests began in January, but intensified on Feb. 1 after the ordinance decriminalizing official misconduct causing damage of under 44,000 euros was passed. Initially, Prime Minister Grindeanu insisted he would press on with passing the decrees despite the protests, but eventually relented on Sunday, insisting he was seeking to heal the divisions in the country.