What choice for Kosovo’s Serbs?

When the results of this Sunday’s local elections are counted and verified, it will come as a surprise to nobody if Lista Srpska (Serb List) has once again dominated in most of the Kosovar municipalities in which Serbs are the majority population. Last time around, in 2013, the precursor to this party, Srpska Citizens Initiative, won the top job in seven of the nine Kosovar municipalities that voted in a Serb mayor.

This week, officials from the government of Serbia once again reiterated their well established call to Kosovar Serbs to vote for Lista Srpska, which officially formed as a political entity ahead of the 2014 general elections. “Lista Srpska is not just a party, but it is a state project,” Marko Djuric, the director of Serbia’s so-called ‘Office for Kosovo and Metohija’ told Radio Television of Serbia (RTS) on Tuesday.

Such an approach received the anticipated condemnation from Kosovo’s majority Albanian opposition parties, who have consistently spoken out against Belgrade’s control over Kosovar Serbs through Lista Srpska, highlighting that any outside influence on a party that uses its constitutional position to obstruct Kosovo’s statehood is undermining the country’s sovereignty. They point to issues such as the refusal of Lista Srpska to support the formation of Kosovo’s army as a prime example, with Serbia’s government officials having consistently repeated ahead of June’s general election that only Lista Srpska would ensure this step was blocked.

But Belgrade’s interference has also been met with criticism from within the political spectrum of Kosovar Serbs, with opponents suggesting that Belgrade is taking advantage of historic bonds that exist between Kosovar Serbs and Belgrade as well as ongoing economic ties. The government of Serbia continues to invest in areas of Kosovo where Serbs live — particularly the north — for maintaining a functional education system and health care system and it also pays many citizens’ pensions. In April 2017, it was reported that 8,327 pensions were distributed to Kosovar Serbs by Belgrade, while Serbia’s government is also paying thousands of public sector salaries in Kosovo.

The Serbian government’s support for a single party puts Lista Srpska at an undisputable advantage, opponents say, thereby harming democracy and the chances of a fair competition.

Oliver Ivanovic, the mayoral candidate for the Citizens Initiative Serbia, Democracy, Justice (SDP) in North Mitrovica, complains that the campaign is not equal due to the open support that Belgrade is giving to Lista Srpska. “We are just sending a message to Belgrade by saying: ‘Listen, we are Serbs too,’” Ivanovic told K2.0 early in the local election campaign.

“We have the right to have other views too. Our views are different to your views, but it doesn’t matter … If someone who is in charge of Kosovo in the Serbian government says, ‘Only Lista Srpska represents Serb views and only Lista Srpska can cooperate with Serbia and if anyone else by some chance wins, we will not cooperate with them’ — that’s bullshit!”

He insists that he will not be used by anyone who is trying to exert their own influence and that he will take the course that he believes is the right one. “I’m not going to be anyone’s leverage,” Ivanovic said. “I’m going to do something to improve the lives of citizens here.”

But this week, while praising Lista Srpska on RTS, Djuric continued to denounce its opponents, especially Ivanovic. “I am convinced that Kosovo citizens will not support the politics of Oliver Ivanovic, as they have not brought anything good,” Djuric said.

Ivanovic is the candidate most likely to challenge the incumbent Belgrade-backed mayor of North Mitrovica, Goran Rakic, who is seeking a second tenure. Rakic won the mayorship in controversial circumstances last time around, in the first elections participated in by Kosovar Serbs. Rakic’s colleague Krstimir Pantic had been declared the winner of a partially re-run election on December 1, 2013, after violence and voter intimidation had marred the original November ballot, but he refused to recognize Kosovo’s state symbols by swearing in.

In the extraordinary election that followed in February 2014, Ivanovic was once again beaten into second place, but in the meantime had become a source of controversy himself, having been arrested the previous month on suspicion of committing war crimes. He would later be tried and found guilty, before successfully appealing for a retrial, which is yet to be held; Ivanovic has repeatedly claimed that the allegations against him are politically motivated but would not expand upon this when questioned by K2.0.

At the last local election, Ivanovic lost to Rakic by a margin of 53 percent to 28 percent; amongst a climate of violence, and calls for boycotts from some circles, only 18 percent of voters in North Mitrovica turned out on that occasion, in contrast to an overall turnout of over 25 percent in Kosovo’s four Serb-majority northernmost municipalities. He is nonetheless confident that he can reverse that defeat on Sunday, although the challenge is a big one.

After a chaotic general election campaign back in June, which included allegations of threats and intimidation, the current campaign has been another tense affair, with opposition parties again complaining of “intimidation and blackmail” toward Serb citizens by Lista Srpska. 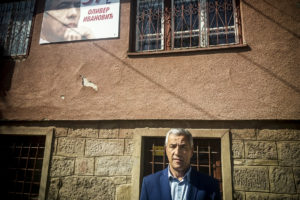 Early in the campaign, four local assembly candidates from Ivanovic’s SDP Citizens Initiative withdrew from the campaign in unclear circumstances. Ivanovic, however, believes that the reasons for the withdrawals are clear and points to the resignation letter written by one of the candidates to the Central Election Commission, in which the resigning candidate urges supporters to instead back Lista Srpska as the “only true and honest fighter for the survival of Serbs.” “It’s obvious that someone influenced those people,” he said. “How? They were blackmailed or threatened very strongly.”

Adding to a sense of foul play, earlier this week Ivanovic was participating in a debate for mayoral elections on the private broadcaster TV KIM in Zvecan, when a blackout happened after the TV cable that connects with the broadcaster was physically cut. “In the circumstances in which we are, when you have reduced space in the media, what you can do?” Ivanovic had complained previously to K2.0. “How can you send your message to the media?”

The allegations by Ivanovic against Lista Srpska are captured in SDP’s slogan for this year’s local elections: “Be courageous for a moment or live with fear for the next 4 years.”

K2.0 contacted Lista Srpska for a response to all the allegations made against it, but received no reply.

While Ivanovic is critical of the role Belgrade is playing in Kosovo politics, he still believes they should be involved in “big issues.” In contrast, Nenad Radosavljevic, the candidate of the Narodna Pravda Iniciativa (People’s Justice Initiative) for mayoral elections in Leposavic not only criticizes Belgrade’s support for Lista Srpska but believes that Serbia should not interfere at all in the affairs of Kosovo Serbs. “As Serbs in Kosovo we must have direct negotiations with Albanians, not through Belgrade,” he says.

Radosavljevic, who was previously mayor of Leposavic in 2001-02 does not believe that he will win the top job in his city this time, with Lista Srpska’s candidate a clear favorite. However, the experienced politician from the northernmost city in Kosovo has other motives to run in this elections.

“My idea is not to win in the upcoming elections but I’d like to open the eyes of my people ― Kosovo Serbs and people in Serbia, who with closed eyes accept what Belgrade says for their lives,” he says. “My mission is to explain to my people how to be encouraged and say what is our interest and do something for it… I want to explain to the people this pressure we have in the north and to ask them to fight for more freedom and not be controlled by Belgrade.” 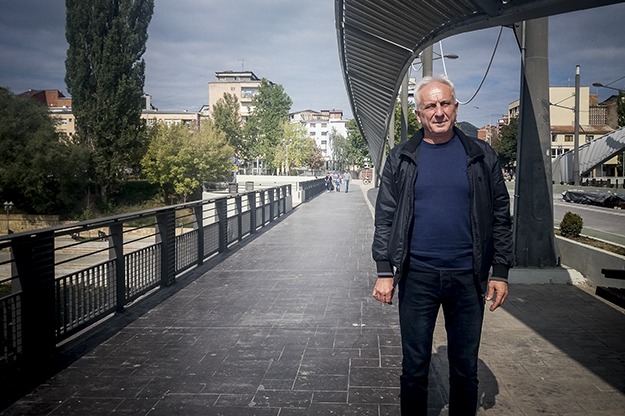 Nenad Radosavljevic doesn’t believe he has a realistic chance of winning the mayorship in Leposavic, but is standing to make a point that there are Serbs representing different views to Lista Srpska. Photo: Eraldin Fazliu / K2.0.

Radosavljevic explains that he has previously been invited to be part of Lista Srpska, but he immediately refused. “They called me too but I do not want to be part of something that creates only bad things for our citizens,” he says. “We will be part of Kosovo and I don’t have a problem with that.”

However, Radosavljevic’s stance is a somewhat rare one amongst Serb representatives, who generally emphasize the strong ties between Serbs in Kosovo and Serbia. “Kosovo Serbs are still very much dependent on Serbia and not only financially but also really strong historic ties,” explains Miodrag Milicevic, the executive director of NGO Aktiv, a Mitrovica-based civil engagement NGO. “Kosovo Serbs are always committed to Serbia because of history and other ties, they listen to the recommendations of leaders of Serbia for whom to vote.”

Since the war, most Kosovar Serbs have tended to see Serbia as protecting their rights in Kosovo; the EU-mediated dialogue between Prishtina and Belgrade, which began in 2011, three years after Kosovo declared independence, has seen a continuation of this situation with Serbia speaking in their name.

However, while the 2013 agreement in principle signed between Kosovo and Serbia has so far done little to improve inter-ethnic relations, it has had a big impact on the Serb political spectrum in Kosovo ― empowering Lista Srpska and bringing them to the fore. Following the signing of the deal on April 19, 2013 that promises the formation of an Association of Serb Majority Municipalities, Belgrade encouraged Kosovar Serbs to participate in Kosovo’s local elections for the first time — and to back Lista Srpska.

“Nowadays, since we are four years later, many people think that everyone is trying to see Lista Srpska monopolising the political spectrum, which means leaving no space to other political forces to voice other policies,” Milicevic says.

For Milicevic, this open support for one party that has left little room for other parties raises the legitimate questions of other Serb representatives: “‘Why are the other Serbs bigger than we are? Are they greater Serbs than us?’”

Milicevic believes that Belgrade is not interested in seeing different Kosovar Serb views as having many representative parties would be harder to exercise control over; a unified body causes less of a headache. “Have you seen recently or lately any protest coming from the Serb community against the politics run by the ruling parties in Serbia toward Kosovo?” asks Milicevic rhetorically. “I don’t think so. You did not see any opposition.”

On the the other hand, it seems that Kosovo’s government has neither the opportunity nor will to influence this process. Much of Kosovo’s focus in the 2013 agreement with Belgrade rested on dissolving Serbia’s parallel structures in the north and practically bringing this part of the country within Kosovo’s jurisdiction; in Lista Srpska, a party which exercises political control on the ground, they can potentially have a powerful ally.

Lista Srpska is already a partner at the central level of Kosovo’s government, with three ministers, and nine out of the Serb community’s 10 reserved seats at the Kosovo Assembly. Kosovo’s Constitution also provides them with an effective veto over many processes that require a two-thirds majority from the Serb community’s representatives. In the current climate, it seems, there is little space for any other Serb views in Kosovo.

Sanja Sovrlic, a journalist at RTV MIR in Leposavic, believes that the chances of a true pluralistic democracy any time soon are minimal and that future elections and democratic processes are dependent on democratic changes both in Belgrade and Prishtina.