Crime and Punishment in Kosovo

No visa liberalisation for Kosovars until politicians are held to account

Kosovo last week accused the European Union of inciting extremism in the impoverished Balkan country for refusing to recommend that visa rules be eased for Kosovars.

Kosovo remains the only country in the Balkans whose citizens need visas to travel to most EU countries, after last week’s European Commission Visa Liberalization report noted that eight pre-conditions still needed to be fulfilled. The political leadership has been speaking of visa liberalization every year since 2008, and recently told citizens that they expected a favorable decision this month and that Kosovo would be in a position to fulfil any further requirements put forward by the European Commission, but obviously they didn’t expect that the EU would still demand the prosecution of those involved in crime and corruption.

“These delays are absurd and deliberate, which not only encourage extremism in the country, but also will increase frustration among the citizens of Kosovo,” read a statement from Deputy Prime Minister and Foreign Minister, Hashim Thaci. 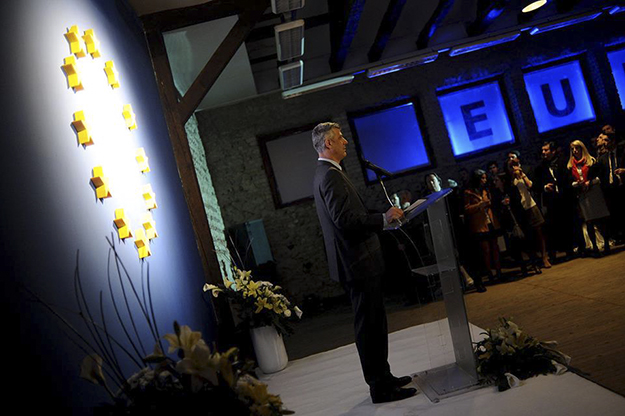 Hashim Thaci reacted angrily to the news that there would be no imminent visa liberalization for Kosovars.

Kosovo is the poorest and most isolated country in Europe, with millionaire politicians steeped in crime. A third of the workforce is unemployed, and corruption is widespread. Youth unemployment (those aged 25 and under) stands at two in three, and nearly half of the estimated 1.8 million citizens of Kosovo are considered to be in poverty. From December 2014 until February 2015, about five percent of the population were forced to leave the country in an effort to find a better life, studies and more dignified jobs, by taking the uncertain path towards wealthier countries in the EU.

The visa news comes at a time when Kosovo is facing the most serious political crisis since the declaration of independence from Serbia in 2008. In the past three months the opposition has disrupted the work of Parliament using tear gas and pepper spray, whistles and water bottles, apparently demanding that the government renounce a deal with Serbia giving more powers to ethnic-Serb communities and another with Montenegro on border demarcation. Thirteen members of the opposition in the country are so far being held in custody for their alleged roles in the disruptive actions.

Almost eight years after the declaration of independence Kosovo is not an independent Republic with full rights. The EU’s attempt to positively influence Kosovo has been significantly weakened (if it hasn’t entirely failed) by the fact that some of its high officials within the EU Rule of Law Mission in Kosovo (EULEX), have been accused of involvement in the very same organized crime and corruption that they have been mandated to combat in joint efforts with local institutions.

One of the main challenges of the visa liberalization process in Kosovo has been to do with the functioning of the legal system and the independence of the judicial system along with the fight against corruption and, implicitly, the establishment of a special court to try alleged war crimes in the country. 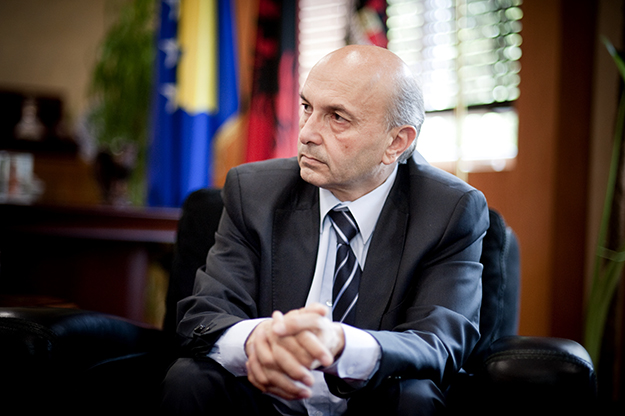 Isa Mustafa promised to fight corruption but has himself been implicated in a scandal this year.

In December 2014 Prime Minister Isa Mustafa promised the citizens that he would fight the corruption at the foundations of the country’s government but several months later he was seen to be complicit amongst the many alleged cases, as local media has reported. His deputy, Hashim Thaci, is heavily accused by the European Council of involvement in crime and corruption, including being suspected of having committed war crimes and crimes against humanity, for example alleged “organ harvesting” during the war against Serb forces in 1999.

The opposition has blocked the Assembly, ever since it approved the establishment of a special court which is intended to try alleged war crimes. The headlines about the disruptive opposition concentrate on Prishtina’s agreements with Belgrade and Podgorica, the former seen to be legitimizing the de facto separation of Kosovo’s troubled northern territory, and the latter allegedly conceding land to Kosovo’s neighbor. However, all may not be as it appears.

In reality, these agreements were not significantly protested by the opposition at the time of their signing, just as the border agreement signed with Macedonia in 2009, which also appeared to concede territory, met with limited opposition. Prishtina and Belgrade have made other agreements that appeared unfavorable to Kosovo in the past — such as the signing of the 2013 Brussels Agreement which was supported in principle by some leading members of today’s opposition — with the opposition showing little serious intent to counter such moves. However, what has changed is that now some members of the political parties founded by warlords are believed to be the target of the special court for war crimes. 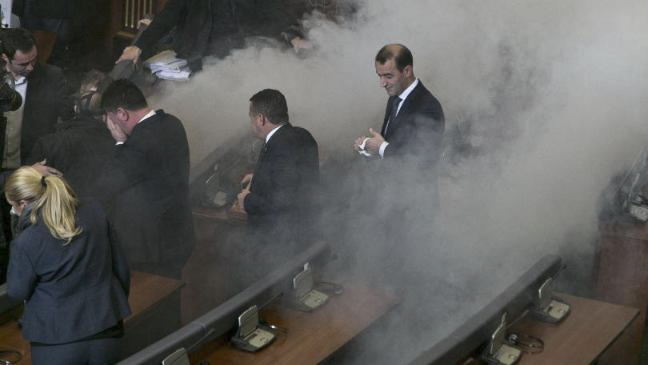 Kosovo’s Assembly has been blocked for three months by the opposition, who have used various means including the deployment of tear gas.

Seemingly much of the broader political leadership in the country has been heavily involved in organized crime and political corruption, so it is almost impossible to think that the country will be granted the right to the freedom of movement.

In an analysis of Kosovo written by the German intelligence service, the BND, and a confidential report contracted by the German army, the Bundeswehr, both Thaci and Ramush Haradinaj, the leader of the Alliance for the Future of Kosovo (AAK), as well as Xhavit Haliti, a member of Thaci’s ruling PDK party and Rexhep Selimi, member of the chairing council of leading opposition party Vetevendosje, are accused of involvement in extended organized crime, including warlord-like behaviour. “The key players (including Haliti, Haradinaj, and Thaci) are intimately involved in inter-linkages between politics, business, and organized crime structures in Kosovo,” reported the German newspaper Die Welt in 2008, citing BND and the Bundeswehr commissioned report. 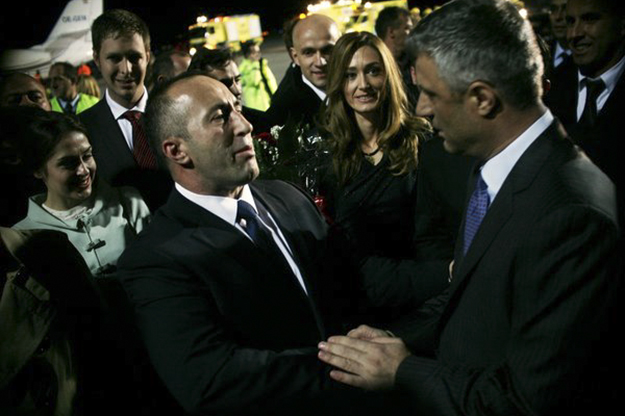 Former prime ministers Ramush Haradinaj and Hashim Thaci have both been implicated in serious crime (although to date, neither has faced criminal charges for their alleged involvement).

According to diplomatic cables leaked by WikiLeaks and NATO intelligence files from 2011, the geographical spread of criminal gangs in Kosovo is located along with alleged familial links and business ties. They include leading members of Thaci’s ruling PDK party such as assembly speaker Kadri Veseli, as well as those in opposition political parties such as the AAK of Ramush Haradinaj, and the Vetevendosje party of which Rexhep Selimi is a leading member, as well as several other small groups that act as fronts for crime clans through order of ‘Kanun.’

So, the revelation of NATO intelligence files and allegations within German intelligence, indicates that the United States and some other Western European powers that support the government of Kosovo have had extensive knowledge for several years of criminal ties to former rebels and also PDK leader Hashim Thaci, including the whole structure of political parties in the country, without exception. Foreign political, military, police, and justice powers in Kosovo, have scandalously kept silent for over 16 years, granting crime a lawless and consequence-free paradise. Those findings suggest that the foreigners would continue to turn a blind eye to crime gangs on their doorstep, if there were no insiders to reveal the evidence of their tacit involvement.

It is obvious that much of the leadership of the country is involved in political crime and corruption and that this can only change when those responsible, from across the political spectrum, are put behind bars; but in fact it seems impossible, as none of the political forces in the country will ever be willing to prosecute those leading members who are involved in crime; the political will does not exist to tackle the problem. In reality there will be no visa liberalization for citizens of the country, unless there is to be a political class free from corruption, but nevertheless evidence suggests that foreign powers have been all too willing to support corrupt political elites in return for political influence.

However, when it comes to defending a narrow political interest the news is not really about crime and corruption, as the Kosovo authorities seem to act without hesitation when arresting their political rivals. The authorities have arrested politicians, but illegally, such as arresting a third of the parliamentary opposition, including its leading figure, an action unprecedented in the post-1945 democratic countries of Europe, whilst the Western embassy establishment in Kosovo’s capital Prishtina hasremained silent to the complaints of the opposition and some media.

Politicians are equipped with diplomatic passports, and for them the freedom of movement is not a concern. They are also often rich, especially judging by many of their criminal CVs. The question is: Why is the EU banning the freedom of movement of citizens, but not that of criminals? A question best answered by the EU themselves; but this attitude has been seeding, empowering and granting a corrupt paradise for those in charge to act with impunity at the heart of the European continent.

Elona Beqiraj: Today, I decide not to decide [...]