How will the sport survive the pandemic?

Curling is typically found in countries that have the kind of funding available to build ice rinks. Countries like Kosovo rarely have a chance to be introduced to ice based winter sports because they lack this structural support. But luck was on Kosovo’s side, at least for now.

In the summer of 2016, Canadian native Peter Andersen arrived in Prishtina for a short internship at a local NGO. After deciding to stay on in Kosovo, he anticipated having to give up playing the sport he had been raised with from an early age.

Yet to his surprise, he discovered online that there had been a curling federation established since 2012.

“While searching for places I could travel to curl, I came across the Kosovo Curling Federation,” Andersen says. “I sent the president, who also happened to be president of the Kosovo Olympic Committee, an email. Besim Hasani explained that curling had been introduced in schools during 2012, but lacked the funding and facilities to be developed further.”

However, the only reason for its existence was the Kosovo Olympic Committee’s (KOK) bending of the rule book to enter the Olympics, after Hasani discovered they needed recognition from five international sports federations in order to enter athletes into the 2016 Summer Olympics.

In order for a sport to be recognized by KOK it needs to have a certain number of clubs in Kosovo. Depending on the sport this can be from three to five clubs in at least two different geographical areas. Curling did not have the clubs but because the World Curling Federation (WCF) was willing to recognize Kosovo and help get it into the Olympics, an exception was made.

After meeting with Hasani, Andersen was offered the position to voluntarily advise and run the federation and develop his beloved sport in his new home, which he quickly took advantage of. With assistance from the WCF, Andersen was able to acquire equipment — including plastic sheets and plastic stones for “iceless curling”— that would allow him to introduce the sport to Kosovo.

Scottish but dominated by Canadians

Curling was first played in medieval Scotland and later brought to Canada by Scottish immigrants. It remains an extremely popular sport in the country and Canada has dominated Olympic medals in curling since its introduction into the Winter Games in 1998.

Curling is played by taking stones (or rocks as they are known in North America) and sliding them (or it is sometimes called throwing them) down a sheet of ice into four concentric circles. Similar to boules, bowls, boccie or shuffleboard, teams try to get their stones to land within the marked circles for a chance to grab points.

Curling Kosovo got their first ever win at the 2019 World Mixed Championships in Aberdeen, Scotland against Nigeria, scoring 9-3.

Teammates sweep the ice in front of the stone as it moves toward the circles to make sure it goes in the desired direction. At the end of each round (or “end”), the team with the stone closest to the center of the circles scores one point — if they also have the second closest stone, they score two points, etc.

In a tournament there are teams of two or four: Thrower(s) and sweeper(s). Kosovo currently competes as one national team composed of two mixed [gender] doubles teams. The appeal of the sport is in the strategy and teamwork. This is why it is often known as “chess on ice.”

“Through public events and school programs, iceless curling has allowed more than 7,000 Kosovars to throw their first stones,” Andersen says. “Despite the lack of ice, we have still trained a handful of Kosovar curlers through international training clinics, enough to form two [mixed double] teams [under one national team] and compete at three world championship events.”

Fast forward to 2019 and 2020, Kosovo reached the international stage in curling, with attention from different media outlets around the world, such as CBC News in Canada, Norwegian Airlines’ in-flight magazine and Evening Express in the United Kingdom.

Even though the Kosovo national team had only a few hours of ice practice in Budapest and Bratislava, they managed to get their first ever win at the 2019 World Mixed Curling Championships in Aberdeen, Scotland against Nigeria, by a score of 9-3. 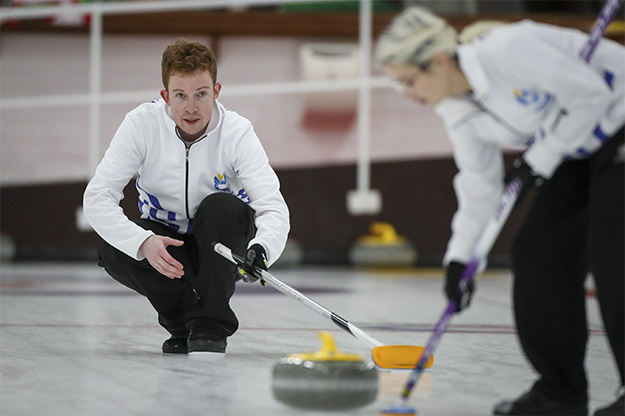 Peter Andersen was interning at an NGO when he decided to volunteer his time to set up Kosovo Curling. Photo: WCF / Richard Gray.

“There were hundreds of people with way, way more experience than me, some of whom had been in the Olympic Games and had won medals representing their country, and I was eager to meet them all,” says Eldena Dakaj, a member of the curling team who studies at RIT Kosovo in Prishtina. “I had the luck of meeting and chatting with some of them. All in all, it felt great, exciting and I learned a lot.”

Other members of the national team had different perspectives on their experiences representing their native country abroad.

“It is a great feeling, especially as we came from a country with no conditions for playing the game. Also during our journey, we had many challenges with visas and financial support, but it was worth it,” says Mirjeta Shatri, a psychologist who lives in Prishtina.

Four years ago, a quick search online for Kosovo curling would have brought very few results. Now, those interested can easily find media coverage about competing in the world championships, and contact the Federation itself.

However, one question remains amid the pandemic that has forced all sports in Kosovo to be postponed: How will sports resume?

How does curling survive?

When Andersen returned home to Canada this spring to become a manager at a Halifax, Nova Scotia curling rink, the future for curling in Kosovo was brought into question.

K2.0 spoke with players, coaches and those involved with Curling Kosovo to gain a better insight on their hopes for the sport in the years to follow, especially after the pandemic.

“You have to remember that, apart from a tiny ice skating rink in a shopping mall, Kosovo doesn’t have any infrastructure for ice sports in place, let alone a curling rink. Curling Kosovo went from being ridiculed to being covered and written about. The media has been of tremendous help for us,” says Meriton Zeneli, the team’s coach who works as a translator in Prishtina.

“In sports you want to get better all the time, there’s no end. We are aware that there’s no workaround when it comes to infrastructure.” 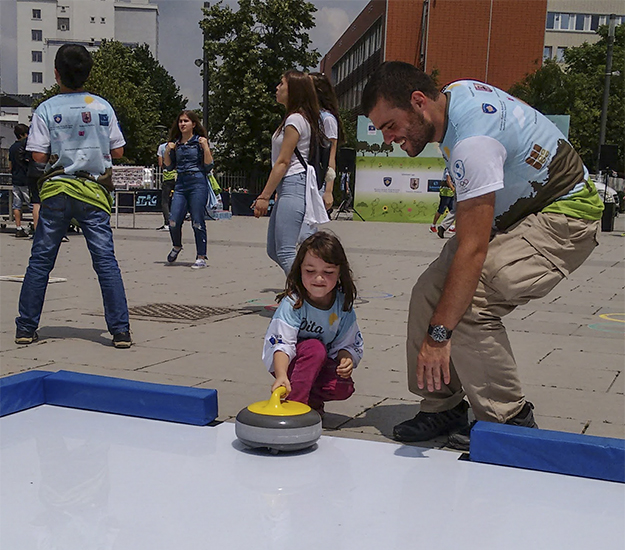 Over 7,000 Kosovars have had a chance to play this sport but now all events have been canceled because of the pandemic. Photo: Celia Russell.

Andersen explains that plans for the national team and the sport’s development in Kosovo had to be canceled in the wake of the pandemic.

“We’ve had to cancel all of our school curling plans, international training camp, and our plans to compete in the 2021 European and World Championships,” Andersen says.

Kosovo will not participate in the championships in order to ensure the safety of the athletes, Andersen says, because of the risks of pandemic travel.

The qualifiers for the World Mixed Doubles Championship will be held in Erzurum, Turkey this year in December. It would have been the first time that Kosovo would be able to compete in an international curling event without any visa complications. Turkey is one of the only four countries where Kosovars can travel without a visa. However, like most curling events, it is likely to be canceled.

Logistically it will be difficult for most participants to compete because of the ongoing pandemic issues including possible quarantines on either side of the trip.

Safety isn’t the only reason why Kosovar curlers will be unable to compete in the near future.

“We don’t have a lot of support, so the pandemic has made things worse for us, because businesses and the government can use the pandemic as an excuse to not fund us right now, even though there are championships at the end of this year and the beginning of 2021,” Dakaj says.

“Basically, we are stuck! It’s hard to travel outside of Kosovo or get funds and donations, but now it’s way worse.”

One of the main goals for Curling Kosovo has been building an ice rink for the sport, which would support not only curling but other ice-based sports like figure skating and ice hockey.

Having a curling facility would make Kosovo the only country in the region to have its own curling rink and it would be able to help grow the sport throughout the region by hosting training sessions and tournaments.

The World Curling Federation (WCF) maintains a positive outlook on Kosovo’s future with curling, in spite of the roadblocks that stand in its path. 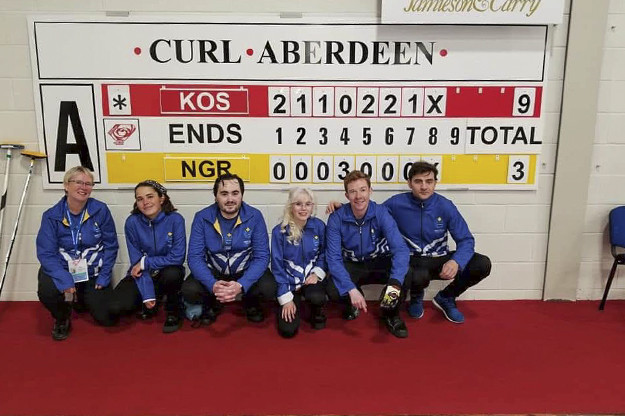 Curling Kosovo made history by playing at the World Mixed Championships in 2019. Photo: Judy Russell.

However, it says that a dedicated curling facility is “essential” for countries to advance and is a “fundamental step in developing the sustainable growth that curling success requires.”

“The funding and development of a dedicated facility is the responsibility of the Member Association, but when they have the desire to take that step, we have several resources and programs aimed at helping them make it a reality,” the WCF told K2.0.

But Kosovo’s hopes of building the first ever curling facility in the Balkans have been set back after the WCF was forced to re-evaluate their financial plans due to the pandemic.

“Due to having to cancel their two highest revenue making events, the World Men’s and Women’s Championships, they have suspended the facility aid programs until the end of 2021,” says Andersen. “Without this, it will delay Kosovo’s plans to build a facility.”

Curling Kosovo — from the beginning — has planned to raise money for the crucial ice rink, according to Zeneli.

The coach points out how crucial the facility is for the national team’s prospective plans and says they need more support from Kosovo’s institutions to help make that a reality.

“The future of curling in Kosovo depends mostly on the construction of an ice arena. Without an ice arena, curling won’t be able to move forward,” he says. “We really hope that the Ministry of Culture, Youth and Sports will include an ice arena in their plans.”

Yet the team’s coach is also critical of Kosovo’s institutions, saying they should do more to provide opportunities for Kosovo’s young population to live a healthier lifestyle and build new friendships with peers.

“I believe that the lack of any ice sports facility in Kosovo demonstrates that the institutions have not done enough to fill a void. I don’t mean only curling. There are so many other ice sports that do not exist in Kosovo due to the lack of a facility,” Zeneli says.

“I truly believe that with the interest shown by the Kosovo youth and a facility, we would in 10 years become a curling force to be reckoned!”K