The deserter prosecuted for war crimes

The story of Sinan Morina, extradited to Serbia on war crimes charges.

Sinan Morina remembers the moment he decided to put on the Kosovo Liberation Army (KLA) uniform for the first time. It was November 28, 1997 as he watched the first public appearance of the KLA at the funeral of a teacher murdered by Serbian military forces in Laushe, Skenderaj. But only four months later, by the end of one of the initial offensives in February 1998, Morina says he gave up fighting and headed towards the border with Albania like many other compatriots, looking for a way to get to the West.

Germany was his goal, where he finally managed to get asylum; he made a life for himself and a family of six and stayed there until 2006. Today, Morina lives in the village of Opterushe in Rahovec municipality, where he works in a store selling inexpensive items. He does not have the official status of being a war veteran, and he admits to having deserted. However, the reasons behind his return to Kosovo from Germany are exclusively linked to the war period.

Warming himself by a wood stove while sitting cross-legged on a mat in his kitchen that resembles a traditional oda, 45-year-old Morina lights a cigarette and starts to tell his story and the reasons why he has been unable to leave the borders of Kosovo for the past five years.

Since July 13, 2005 Morina has faced war crimes charges from Serbia and Belgrade-issued Interpol arrest warrants, just like many other former KLA members; based on these warrants he has been arrested while attempting to cross borders four times. “I cannot leave,” he says. 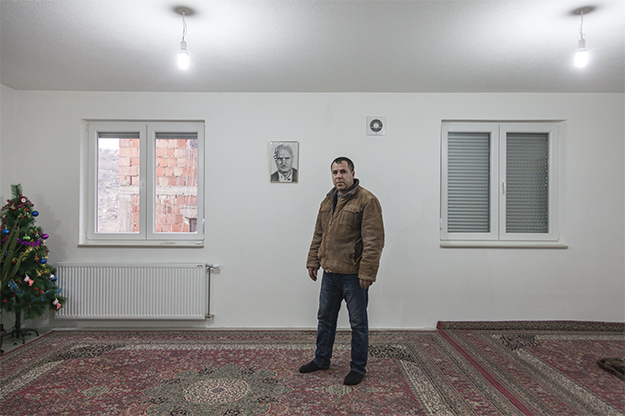 Sinan Morina lives in Opterushe in Rahovec. He has been unable to leave Kosovo for years due to Belgrade-issued Interpol arrest warrants. Photo: Majlinda Hoxha / K2.0.

The first time he was detained was in Montenegro in December 2006, when he was travelling from his home in Germany. “We were on our way to Kosovo in order to spend our vacations there and to celebrate New Year and Eid,” he explains. Upon entering Montenegro, he was stopped by the border police, who took him to a detention center in Podgorica. “They are looking for you in Serbia,” the police told him, explaining that Serbia was seeking his extradition. “For war crimes.”

According to the indictment, Morina was charged with war crimes against the civilian population during what Serbia refers to as the “armed conflict” between the military forces of the Federal Republic of Yugoslavia and the “armed organization” (the KLA). “The next day, I was taken to Pozarevac, Belgrade,” recalls Morina. A 30-day detention was ordered, before he was transferred to Belgrade. He spent seven more months in detention in Serbia’s capital prior to appearing before the War Crimes Chamber of the District Court of Belgrade.

Morina stood accused of committing serious crimes in Opterushe in July 1998, including participation in the demolition of property and religious buildings, and the deportation and unlawful detention of Serb civilians, as well as being part of a unit that committed murders and rape.

But on July 13, 2007, while he was being held in detention, the indictment was changed and he was additionally charged with participation in the murder of eight Serbs. The eight named victims were Bozidar, Novica, Mladen and Nemanja Bozanic; Spasoje and Miodrag Burdzic; Spasoje Banzic and Sreten Simic. Their corpses, according to the indictment, were thrown into the Vulljak cave, in Malisheve.

It was alleged that Morina had committed all of these crimes as part of a 34-person unit (the name of which is not given in this indictment), under the command of Halit Dulaku, commander of the KLA’s branch in Opterushe. According to the indictment, criminal proceedings were being carried out for each member of the unit, individually.

That indictment says that on July 17 and 18, 1998 Morina, “Armed with personal infantry weapons, in a joint, simultaneous and premeditated action … wilfully participated in the commission of the criminal offence described in this indictment, wherein he engaged both as an individual and as a member of the group.”

According to the indictment, the alleged actions were aimed at forcefully removing Serbs from the Rahovec municipality area and were part of a wider common plan: “the establishment of the KLA[‘s] full control over the territory of Kosovo and Metohija and the general removal of the Serbian population thereof.”

But on December 20, 2007, all these charges against Morina were dropped by the Belgrade court. According to his acquittal, a copy of which K2.0 has obtained, a year after he was initially detained in Montenegro, and having faced several witnesses, he was declared free of all charges since no witness or evidence proved that he was involved in these crimes.

“See, I told the court as well, immediately after the first attack [in February 1998], I went to Albania, and I stayed there for a long time; my wife was pregnant, and then together we went to Germany with false passports, and when we reached Germany through Slovenia, I told them our passports were false and I asked for asylum there,” says Morina. “Many of us deserted at the time immediately after the first attack, but few want to admit this.” 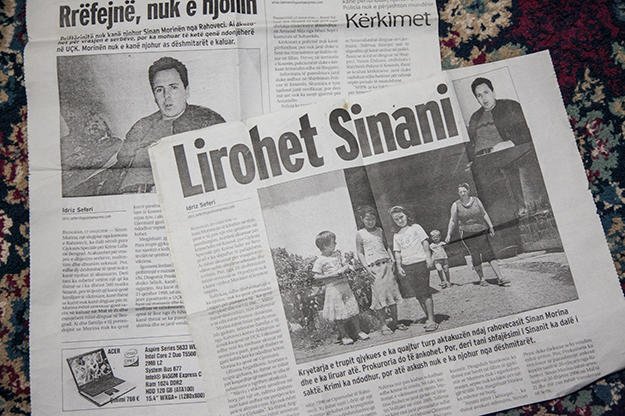 Morina was acquitted of war crimes charges by the War Crimes Chamber of the District Court of Belgrade in 2007, a year after his extradition to Serbia from Montenegro. Photo: Majlinda Hoxha / K2.0.

According to the judge, no witness in his case had managed to identify Morina as part of “Unit X” (as it was referred to in the verdict), or as the person who had committed the alleged crimes in Opterushe; the one person who did claim it was him was a witness called Slavica Banzic, who Morina was alleged to have severely beaten and stolen a police jacket and 500 deutsche marks from. However in her statement she described Morina as a corpulent and blond guy — Morina is neither of these things.

In the acquittal, the court in Belgrade considered her statement not to be credible, and made in order to incriminate him solely because he is Albanian. This witness changed her statement several times, after not being able to prove that Morina was part of the unit that allegedly committed the murders.

“The evidence proposed by the war crimes prosecutor were exclusively made to prolong the procedure, by using illegal (invalid) evidence which the court cannot use to issue a verdict,” was the assessment of the court, which at the end says: “No new evidence in this case shall change the verdict.”

However this was far from the end of the matter for Morina.

On August 25, 2009, after an appeal by the prosecution, Serbia’s Supreme Court ordered a retrial in Morina’s case, although by this time he had already left Serbia, for Kosovo; following the Supreme Court’s decision, in December 2009 an international warrant was once again issued for his arrest.

At the beginning of 2010, Morina was arrested for a second time, this time in Croatia, where he was looking for work. He spent 16 months in detention there until Croatia’s Ministry of Justice decided to release him, refusing Serbia’s extradition request.

Following his release, Morina headed for Slovenia, where he says he had a work permit. However upon entering Slovenia he was arrested again. “As far as I remember, I stayed in detention for three months or something,” he says.

“When it comes to these big shots, like Ramush, they all hustle."

From Slovenia he briefly returned to Germany before attempting to head back to Kosovo. “In 2011, again, on my way into Austria I was detained again,” he says, explaining that he spent three more months in detention. He was finally released at the beginning of 2012, and since then he says he has not left Kosovo.

Aware of Morina’s case, in November 2016 Kosovo authorities sought the removal of the warrant against him and against 19 other former KLA members; the issue was addressed to Interpol through the United Nations Mission in Kosovo (UNMIK), as Kosovo is not an Interpol member.

Also included on the list of 19 was former Kosovo PM, Ramush Haradinaj, who has been on parole in France since January, where he was arrested as a result of a Serbian-issued warrant. Haradinaj’s arrest, gave Morina hope that someone might perhaps also hear about his case and help and move the issue forward. “When it comes to these big shots, like Ramush, they all hustle; I have been arrested … four times and nobody did anything for me, they didn’t even ask me what I’ve been through,” he says. “All I want is to move freely and work abroad as I used to, since I have to provide for my family.”

Whether Interpol agrees that there is a legal basis to remove the warrant against Morina remains to be seen; a decision is still pending. Until a decision is reached, he must stay in Kosovo and hope that the extra attention on the issue through the Haradinaj case also helps to move his case forward.K