Diving into a virtual world

Prizren in the summertime is a reality I wouldn’t normally want to escape from. But, in the name of artistic exploration, I spent the opening night of DokuFest lined up slightly shamefaced among the middle school children, all of us seeking a ticket for the comfy swivel chairs by the riverside, before delving into a new virtual existence through a bulky mining helmet stuck on my head.

This was my second VR experience, having previously watched a short based on “The Conjuring 2” from the comfort of my own home, thanks to the aid of some 20 dollar Google cardboard. Back then I spent most of my time trying to avoid the friendly nun that was stalking me instead of trying to follow her. This time, I swore to myself that I should attempt to follow the running images instead of closing my eyes and involuntarily dodging.

Three shorts are available for viewing at the VR Cinema, two visually-emphasized 6-minute shorts titled “Chasing Coral: the VR Experience” and “A History of Cuban Dance,” and the first chapter of an audio-heavy short titled “Notes on Blindness.” I picked Cuba as my first virtual destination, hoping to stave off major headaches from the screen inches away from my eyes.

Soon I was there in Havana, which was surprisingly similar to Prishtina with its socialist apartment blocks. Of course, the term “virtual reality” is always sensationalized because ultimately I was staring into a screen strapped to my head, but during the six minutes I felt as if the dancers that pirouetted through the streets of Havana were right there, just in front of me. I turned my head to follow the movements of the dancers only to be brought back to the real world when I looked down and didn’t see my own feet.

But the experience is still the closest I have felt to the streets of Cuba, a place I have never been to. VR offers something so much more than just watching the Travel Channel on a flat screen. Visually, I was there in Cuba, I saw pedestrians, performers dancing right before my eyes, I wasn’t in my living room watching someone that I know is miles away from me through a screen. No matter how crystal clear my TV is, it does not beat the sensation of having no boundaries between myself and the performers and their environment. 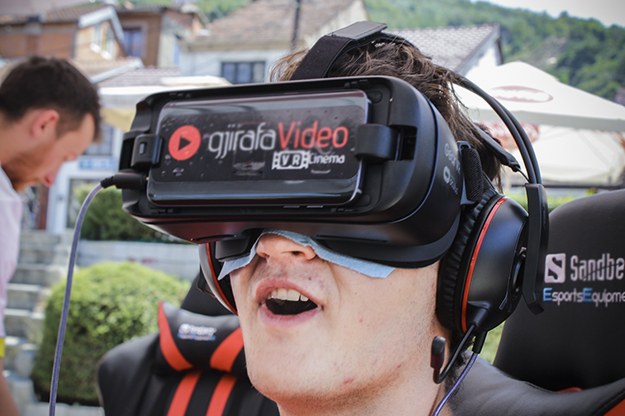 The VR cinema is open to the public for the entirety of DokuFest, down the stairs from the Sinan Pasha Mosque. Photo: Agan Kosumi / K2.0.

The visual stimulus of the VR film was so strong, I can still remember distinct details of one dancer’s costume, as she trained right before my eyes under the guidance of her instructor. The visuals are so overwhelming that they can slightly overpower the other senses, I remember only vaguely the salsa music accompanying the dances, and almost none of the narration explaining them.

Troubled by the thought that I did not let the wonders of virtual reality seduce my sense of hearing, I bore the 39 degree heat of the Prizren sun and ventured to the VR Cinema again the next day. I put all my hopes on the first chapter of “Notes on Blindness” bringing my ears to the promise land.

The documentary is narrated by writer and theologian John Hull who went totally blind after years of deteriorating vision. As Hull narrates the sounds he hears while sitting in a park, glowing visuals appear and fade away as if I was in the mind of Hull, watching him create these images in his head from his memories.

I do not claim to now completely understand the world of the blind but for seven minutes I was in the shoes of a man who had memories of what the world looked like, trying to keep his visual perceptions going even after losing his sight.

It made me think of the potential of virtual reality, not only to provide next generation entertainment to the masses, but to create the virtual experience of everyday people like the visually impaired, the deaf or anybody’s sensory world who we might not be able to fully understand. VR can open so many more doors for so many different fields. It is a whole new world for the future of cinema.K