Which films have had biggest impact on festivalgoers?

As DokuFest enters its fifth day, K2.0 took to the streets of Prizren to ask moviegoers which films from the festival had made the biggest impressions on them so far. With the huge array of films screened over the past few days, a wide range of answers were given with very different responses, displaying the versatility of films, and the different ways they can touch the human mind and soul.

John Smith has been featured heavily and will continue to be featured in this year’s festival with 21 of his avant-garde short films being shown in the John Smith Retrospective program. His less direct approach to storytelling impressed Albiona Bendaj from Albania, who liked all of his works. “They’re all pretty philosophical,” Bendaj said. “He takes something which is really random and put it in a random situation which you never thought would be possible, everything is very personal, even the way you feel things.” 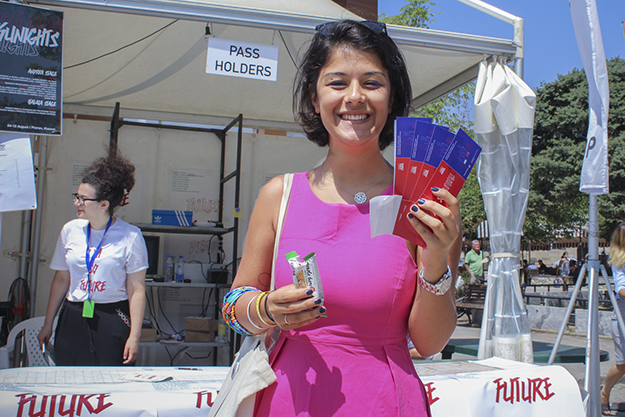 Visitor to the festival from Albania, Eli Kraja, picked out Terrence Malick’s Voyage of Time as a highlight. Photo Agan Kosumi / K2.0.

The Cate Blanchett-narrated Voyage of Time incorporated heavy usages of visual effects and stunning imagery to explore the concepts of time and life itself. Eli Kraja from Albania was pulled in by the artistic visual tropes used to explore a very philosophical theme. “The visuals are crazy, the music is also great and it was just one of the best documentaries I have seen in a while,” Kraja said. “It felt like I was in the movie you know?”

Often narrative driven films have the biggest impact when its audience can connect with the setting and its characters, which is what Sonja Methoxha felt the Prishtina-based film “To Want, To Need, To Love” did. Director Ilir Hasanaj’s brother was in the film and the concept of self love was told from his angle. “I’m 23 years old now, so it’s a very hard age when everyone is freaking out about life so I guess I really liked the idea of self love, and I relate with the brother,” Methoxha said. “To Want, To Need, To Love” is being screened again at 22:00 on Thursday at Kino Plato and at the same time on Friday at Kino N’Lum.

Retelling tragedy is perhaps one of documentary cinema’s most powerful roles, and films with a personal connection can hit especially hard. Decades after the Yugoslav conflicts of the ‘90s, the impacts of war are the visible today, as shown in Lidija Zelovic’s “My Own Private War.” Two viewers from Serbia put this film on top of their list. “It’s just such a personal story, it has such a high sensibility and I could also relate to it a little bit coming from this region,” Kristina Molnar said. 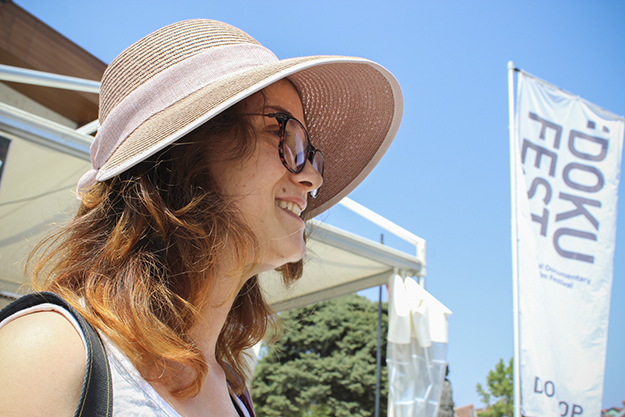 Katarina Kostic was moved by the personal story told by Lidija Zelovic in “My Own Private War.” Photo Agan Kosumi / K2.0.

Her compatriot Katarina Kostic was also moved by the film. “It was my first encounter with the optimism of the people who lived in Sarajevo through the war and continued to live there,” revealed Kostic. “I don’t think the movie was meant to be optimistic but there was an inner line of optimism that couldn’t be covered with the ruins.” The film will be screened again on Wednesday at Shtepia e Kultures at 16:00.

Adam Fischer from Saint Louis, Missouri had never experienced being caught in a war, but that was also the reason he has most enjoyed the BAFTA-winning “Home,” as it gave him something to think about that was never there before. “It was hard to watch because I’m a father of two little girls so it dealt with some heavy issues I thought were very interesting comparing my life versus life in another country,” Fischer said. “I thought it was very well done, a very beautiful movie.” Home will be screened for a second time at the Bahce outdoor cinema at Lumbardhi at 20:00 on Friday night.

Also being illuminated about the potential horrors of conflict was American peace corps volunteer Ezra Kircher. “Mama Colonel” revealed the intricacies of the numerous wars that have broken out in the Democratic Republic of the Congo in the past decades, as well as its fractured social structure. “It was a really high production, it is a well done film about a topic I didn’t really know much about,” Krechmer said. 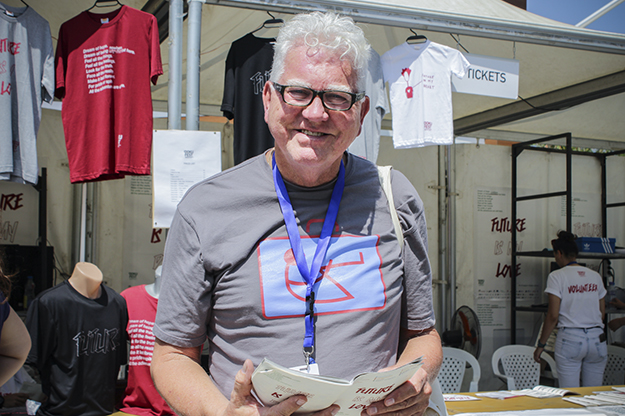 John Osborne, the associate programming officer at the American Documentary Film Festival in California was delighted by the experimenatlism in “Tony Conrad: Completely in the Present.” Photo: Agan Kosumi / K2.0.

Other people watch films for inspiration, like John Osborne, who is at DokuFest to seek out films that could be screened at the American Documentary Film Festivals held in Palm Springs, California. He loved Tyler Hubby’s “Tony Conrad: Completely in the Present,” a look through Conrad’s career as an experimental multi-media artist. “It’s an amazing experimental film about this man who was sort of an avant-garde filmmaker with sound,” Osborne said. “It’s an incredibly creative film, makes you want to make movies with all sorts of things.” You can explore the world of Tony Conrad again at DokuKino at 18:00 on Wednesday evening.

With more than half of the festival to go, there are still many more films to be screened, issues to be explored, artistic styles to be disseminated through the cinema screen. Look out for K2.0’s second installment of the selector’s selections on Friday for more recommendations. Until then, happy watching.K