The ebb and flow of LGBT rights across the globe - Kosovo 2.0
Monographs | LGBTI

The ebb and flow of LGBT rights across the globe

Throughout history, the fight for LGBT rights is a story of victories and defeats.

In the early hours of June 28, 1969, police began raiding the Stonewall Inn, a haven for Lesbian, Gay, Bisexual, and Transgender (LGBT) persons in New York City. What started as an ordinary search of the premises, a semi-frequent occurrence to uncover bootleg alcohol or receive cash payoffs, turned into a riot. It was an event that would become a catalyst for the LGBT movement and the fight for equal rights.

The Stonewall riots solidified a united front against the heteronormative society that impinged on the freedom of LGBT individuals. People like Marsha P. Jackson, the black trans woman credited with throwing a shot glass when asked to line up for arrest, Sylvia Rivera, a Latina trans woman said to have thrown the first brick during the riot, and Raymond Castro, a Latino gay man believed to be the first to resist arrest and physically fight back, became heroes of the movement. These names were the impetus for resistance to the status quo. 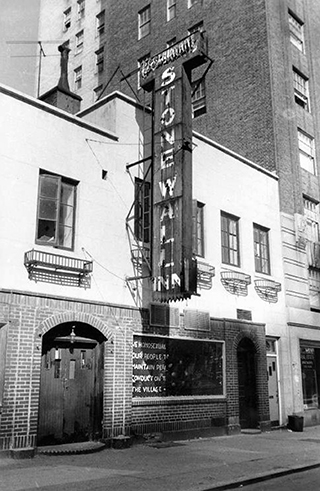 The site of the original Stonewall Inn at 51-53 Christopher Street in Greenwich Village, New York, has since been made a U.S. national monument. Photo: Creative Commons.

During the weeks following, unrest and protest broke out. On the first anniversary, in 1970, New York celebrated the first Pride march. Pride Parades and festivals are now celebrated on almost every continent annually. The events of that night in 1969 quickly became a rallying cry across the globe, a united fight for LGBT rights.

Without a specific starting point, Stonewall can be seen as the beginning of this modern movement but the history of LGBT lives goes back thousands of years. Though often hidden, the histories of lives led by LGBT persons around the world aren’t uncommon. Same-sex attraction has had a place in societies since early civilizations in Palestine to Ancient Rome, displayed today as ancient relics and historic art finds. Gender fluidity was represented through deities, gods, and goddesses in cultures in Mesopotamia and India.

Found in a series of caves outside Bethlehem, the Ain Sakhri lovers figurine is thought to be one of the oldest representations of two people engaged in sexual intercourse. Created 11,000 years ago, the figures are intertwined, their genders ambiguous and open to interpretation.

Sex in Ancient Rome also had a particular fluidity, where same-sex relations were common, although often only recognized between men. This lifestyle is shown on the Warren Cup, a Roman artifact depicting two separate engravings of men making love. Paul Roberts, curator of the British Museum where the cup is on display, explained, “Scenes of lovemaking were everywhere in Roman art… Love and sex between men, often of differing ages, was part of Greek and Roman culture.”

Our modern notions of gender have become binary. We largely categorize ourselves into two categories of men and women, but this assumption has been challenged throughout history in civilizations across the world. The Mesopotamian Goddess of sexual attraction and war, Ishtar was known to have the power to assign and change genders, a gender fluidity that may seem radical to some today.

In India, a third gender, hijra or kinner, is officially recognized by the Supreme Court. A third gender has been recorded in almost every culture throughout history, including the recognition of “two-spirits” in Native American culture, the fa’afafine in Samoa, and muxe in Mexico.

The rise of Christianity in Europe saw many societies like the Roman Empire and the Hellenistic period revert from their previous acceptance of homosexuality to criminalizing sodomy and same-sex acts. Twenty-nine years after the Edict of Milan, which made Christianity the state religion, the emperors of Rome outlawed same-sex marriage in 342 AD, the first law of its kind.

Same-sex relations became criminalized in many regions in Europe in the following centuries as religion limited the freedom and rights of LGBT persons, with punishments as severe as execution.

A similar pattern can be seen in other regions, like the Middle East, where strong religious identities correlate with less tolerance for LGBT rights, even to this day. According to global research by the Pew Research Center, same-sex relations are more widely accepted in regions where “religion is less central in people’s lives.”

During the French Revolution, France became the first country to decriminalize same-sex relations in 1791. The movement to eliminate the French monarchy brought about widespread sentiment to limit the influence of the Catholic Church.

Although this was a major milestone for gay rights, many countries at the same time continued their criminalization of same-sex relations. It wasn’t until the period following World War II that many other countries in Europe followed France’s decision to decriminalize. 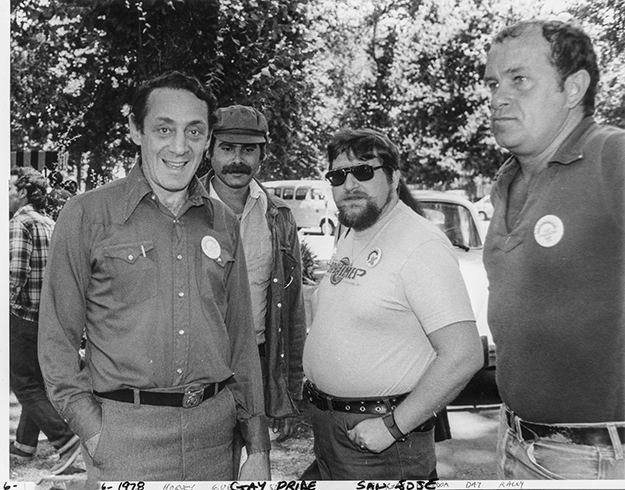 The 1960’s saw the beginning of large social upheavals in the U.S. linked to the fight for pacifism and against racism. In response to the Stonewall Riots, the U.K.’s Gay Liberation Front became a political party in 1971. The rapid expansion of pro-LGBT sentiment resulted in increased rights in many countries, but also came with a direct response to silence and limit those freedoms.

In 1972, Sweden became the first country to provide free hormone therapy to people who could then legally change their sex. However, in the same year, “homosexuality” remained on the American Psychiatric Association’s list of mental disorders, only to be taken off a year later after two decades of being described as a “sociopathic personality disturbance.”

In the U.S., gay rights became a prominent but divisive issue. Arguably one of the most well-known openly gay politicians, Harvey Milk was elected as the San Francisco City-County Supervisor in 1978, making national and international news. His charismatic character was a beacon of hope for the LGBT community in the U.S., propelling the movement, promoting LGBT-owned businesses, and protecting civil rights.

Inspired by Milk, Gilbert Baker stitched the first rainbow flag in 1978, which became known as the symbol of the LGBT movement. Throughout the ‘70s, ‘80s, and ‘90s, many public officials, athletes, and celebrities like Milk became ambassadors of the LGBT community.

Throughout the 1990’s, an increasing number of countries decriminalized same-sex relations and equalized the age of consent for heterosexual and homosexual couples.

The last 100 years has seen an exponential improvement in the rights for the LGBT community. However, along with the advancement of LGBT rights, the growing visibility has provided opportunities for increased discrimination and retaliation.

In the last 30 years, the LGBT movement has seen a significant rise in backlash against their community. As equal rights become more accessible, there has been a push back attempting to limit these rights. This response of a political nature has attempted to use anti-LGBT sentiments to promote divisive and detrimental legislation, resulting in increased social stigmas.

This backlash has two distinct and separate strains. In the Western world, opponents of LGBT rights want to intimidate the community and dismantle the gains achieved thus far. However in developing countries, opponents want to halt the movement in its tracks, preventing any further progress. Race, class, religion, and geographical location intersects to create a backlash that affects those in the community differently, and pervades efforts to access and achieve equal rights.

In 2005, thousands of people took to the streets in Madrid to protest same-sex marriage legislation. Similarly, in 2013 in Paris, protests erupted against a new law legalizing gay marriage. In both cases, many opposed the laws based on religious grounds. In 2017, Italy was reported to be one of the worst countries in Western Europe for gay rights, based of the legal status of the LGBT community and the lack of accessible or available rights.

Uganda’s attempts to outlaw homosexuality have sparked protests across the world, including in the United States. Photo: Creative commons.

The 2016 terrorist attack on Pulse, a gay nightclub in Orlando, was the deadliest incident on the gay community in the U.S. Carried out by an openly homophobic terrorist, 49 people were killed. Also in 2016, the House Bill 2, better known at the “Bathroom Bill”, in North Carolina sought to force transgender people to use the bathrooms of their sex assigned at birth. Not only discriminatory, the bill directly put those who do not present as their birth gender in danger.

In developing and post-Communist countries, LGBT rights are being severely threatened with growing attacks on individuals. Uganda’s 2009 anti-homosexuality bill has fueled widespread discrimination, making same-sex relations illegal with the possibility of large fines, arrest, and even life imprisonment as punishment, including unsanctioned violence within communities. In January 2014, Nigeria passed a similar anti-gay bill that resulted in increased violence against the LGBT community, and it even became a tool to legitimize human rights abuses.

According to the Grupo Gay da Bahia, over 3,000 LGBT people have been murdered in Brazil since becoming a full democracy in the mid-80’s, known to many activists as the “Homocaust.” ISIS reportedly uses executions as intimidation against gay men.

However, along with continued criminalization of LGBT persons, the community has seen many important developments.

Some have attributed this to fact that the LGBT community pervades all social constructs, nationalities, religions, races, and ages. People are more easily able to understand and connect with the LGBT individuals as they are more and more likely to have personal experience with a gay or transgender person. 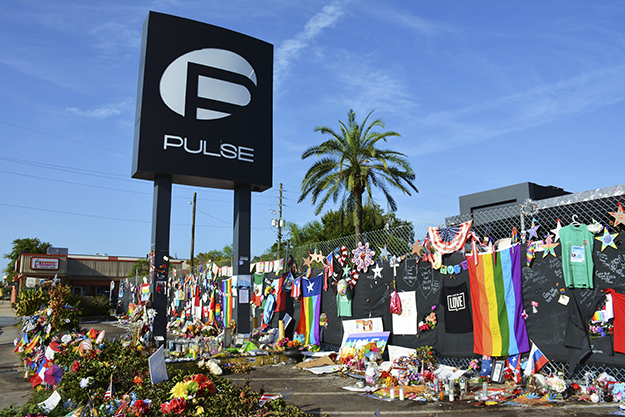 The attack on gay nightclub Pulse in Orlando, Florida in which 49 people were killed drew condemnation from across the world. Photo: Creative commons.

More than ever, same-sex marriage is becoming decriminalized and legalized across the globe. In 2000, the Netherlands became the first country in the world to legalize same-sex marriage, and in 2009, South Africa was the first African country to do so. The US’s own historical decision came in June 2015, bypassing state legislation and going straight to the Supreme Court, allowing same-sex marriage in all 50 states.

Social progress is an ebb and flow, not an explicit victory or defeat. The success of the LGBT movement has had many successes, especially in the last few years. However, there are still many places in the world where the dangers of living openly as an LGBT person can cost your life.

The fight isn’t over. With the exponential success, momentum is building within the movement. In the words of LGBT activist Peter Tatchell, “the only liberation struggle worth fighting for is a struggle inspired by love.”K

Back to LGBTI Rights Monograph