Elvira Dushku: When you dream, you have to dream big - Kosovo 2.0
One-on-one | Sports

Elvira Dushku: When you dream, you have to dream big

Elvira Dushku is one of the few prominent women in Kosovo sports or sports throughout the region. As secretary-general of the Kosovo Basketball Federation (KBF) — one of only three women secretary generals of sports federations in the country — she is fundamental to its management and handles the day-to-day running of the sport.

Dushku began as a player herself for KB Prishtina in the mid-1990s before volunteering for them as a coordinator. She also worked as a sports journalist for Kosova Sot newspaper, but always kept one foot in basketball.

In 2015, she began working at KBF in public relations before being appointed secretary general in 2017, initially on an acting basis but later permanently. As secretary-general, the International Basketball Federation (FIBA) enabled her the opportunity to attend sports administration training in both the U.S. and Europe.

In Kosovo, basketball is only second to football in popularity and financial strength. There are over 2,000 basketball clubs in Kosovo and the country has had both men’s and women’s leagues since the Yugoslavia period. Despite this, women’s basketball still faces a lack of support from fans and sponsors alike, and women players are still not paid equally to men.

Of course, problems like this exist globally, not just in Kosovo. In the U.S., players in the WNBA — considered one of the best women’s basketball leagues in the world — make so much less than their counterparts in the NBA that their entire wage bill could be paid with the salary that Golden State Warriors’ star Steph Curry gets in one year, with change leftover.

Like every other sport, basketball is having to contend with the COVID-19 pandemic.

As Dushku herself notes, these sorts of conditions do not encourage women to play.

Big developments are set to come to Kosovo basketball, with the top tiers due to join forces with the Albanian league for the first time for the upcoming 2020-21 season. Dushku points out that the idea of a combined Kosovo-Albania league isn’t new as it was first proposed in 1999. But it does raise questions around what opportunities it will bring and how it will affect the development of both Kosovo and Albania’s basketball ambitions.

Like every other sport, basketball is also having to contend with the constraints of the COVID-19 pandemic.

After the 2019-20 season was cut short in the spring, teams were unable to train together until updated rules at the end of September allowed for indoor and outdoor practices of up to 50 people. With the sport having returned with the Super Cup in mid-October, Dushku and the Federation have had to consider how to protect spectators and players going forward. 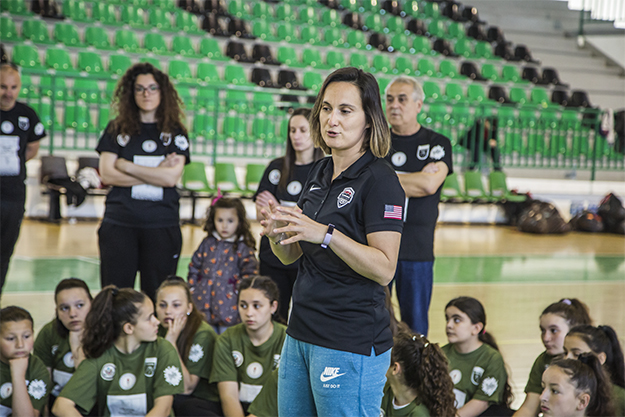 Elvira Dushku has been involved in basketball since she started as a player in the mid-’90s. Photo courtesy of Kosovo Basketball Federation.

K2.0 talked to Dushku about sports’ comeback from COVID-19, the challenges facing women in sport and sport management, and how to encourage women and minorities into basketball.

K2.0: How easy or difficult is it for women who want to play sports in Kosovo, compared to men? And how did you get over the hurdles of playing sports as a woman?

Elvira Dushku: It’s not easy because the salaries are low for the same basketball players; I mean, not just in Kosovo but all over the world. For the men, they are at a high level and for the women, they are at a low level. But at the same time, I can say that it’s a privilege to be in a sport, to be a basketball player, to be a part of the sport.

How easy is it to find sponsors for women’s basketball?

It’s difficult. It’s difficult for the women’s clubs in basketball. It’s easy for sponsors to give money to the men’s clubs because there is publicity and there are the fans, but women’s basketball? The participation of fans is not high. And for that [money] the sponsor wants publicity.

But I think that in the last two years things have started to change. You can see when the two strongest teams in the women’s league play — they come from Prizren and Prishtina, and when they play in the Hall of Sport in Prizren, the gym is full. When they played last year, there were 1,500 spectators watching the [Championship] final.

As a federation, we are also pushing the sponsors a lot to think in this direction, and I think we are doing a very, very good job.

It’s been an idea since 1999, and now we are implementing it.

We are just going to start with the men in November.

Then the idea was to cooperate with the Albanian Basketball Federation to organize a women’s club tournament with the best women’s clubs in Albania [but this is still on hold because of the pandemic].

We will see what the situation is with COVID, and if not this year then at the beginning of next year we will start for sure, and we will continue to support our teams from Kosovo but also the teams from Albania.

Regarding the Olympic representation, Kosovo will always continue to participate separately. And of course Albania [will too]. So this joint league — it’s also more an interaction for the sponsors. It’s been an idea since 1999, and now we are implementing it.

The idea is also to grow basketball in the two countries, because in Kosovo we have more basketball publicity and there you have more football publicity, and we want to help them but also work together to create one project as joint leagues for both the men’s and the women’s teams.

Do you think the joint leagues will make the players more competitive?

Yes. In the men’s league you always have more games, because they also play internationally. As a tournament, we wanted our clubs to play more games. When they play more games, they become better. And we want to get our basketball players, both women and men, to play better.

So it’s kind of competitive for them because they [the women’s teams] will have one more week, one more tournament that they will play and they need to be good in — they need to prepare [better] and to play better and to practice better.

What will basketball look like this fall and winter, given that we are still experiencing the COVID-19 pandemic? Are you going to have spectators?

[Until the end of September we could not] practice because of the situation and the government [had] not published new rules. But we prepared everything to start in October.

The beginning of the season [is] without spectators, but we have prepared a manual on how to play [given the COVID-19 circumstance] — how clubs should prepare for practice, how clubs should prepare for games. And we hope that in January the situation will change and spectators will show up at the gyms, because without spectators it’s very hard. But it’s a common situation [for everyone] and we have to continue.

We will take all the measures [that are set out in] the manual that we prepared, start [the season] without an audience and then see what is happening with the situation.

[On October 28, KBF announced it was delaying the start of the youth seasons due to the rising number of COVID-19 cases in Kosovo.]

What about the international players who usually play here, many of whom left at the start of the pandemic? Are they able to return and play the season?

The clubs have signed agreements with the international basketball players [who have since returned].

Despite basketball’s traditional popularity, football in particular is growing all the time. Do you feel that there is a competition with football in some ways? And what does the Basketball Federation do to get more people playing the sport, particularly women and minorities?

We have joint programs with FIBA and the government that we are implementing on how to get more girls in basketball. And I think that we are doing very well in this regard, because in 2017 we had just 10 teams in the women’s leagues and now we have 24 teams.

So the numbers are growing, and we are very happy with that, but it’s not enough. We want to push hard, and the [KBF] president and Board are supporting me a lot on the issue of women’s basketball in general. 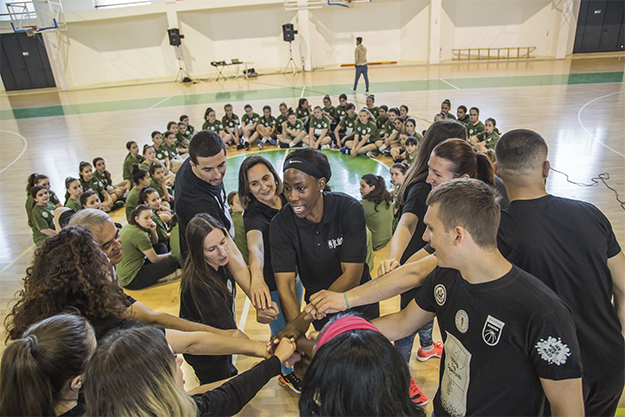 KBF has implemented various campaigns to get new players into the game in recent years. Photo courtesy of Kosovo Basketball Federation.

It’s not just [about] girls playing basketball but also women being part of basketball in the clubs as administrators, as referees as coaches. We have five strategic goals and one of them is about women in basketball.

And how about minorities — do you have a strategy for minority inclusion?

Yes, we do. We cooperate with the U.S. Embassy and with the State Department and through them we organize different camps and different tournaments in Gračanica in Mitrovica and Vitomirica — in places where there are minorities, and we really enjoy this kind of project.

We have contacted people in such areas who have [learnt how] to organize tournaments and to get more [junior] participants. 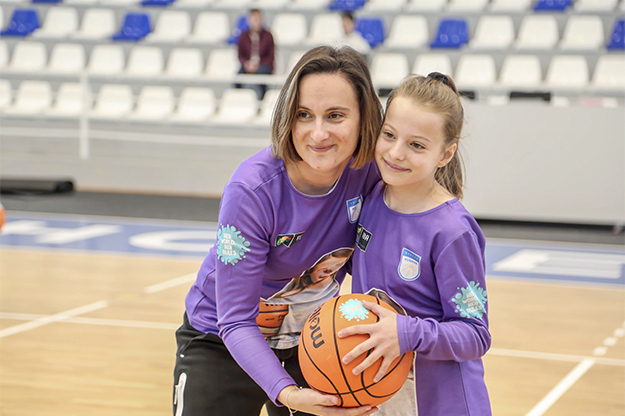 Elvira Dushku hopes that she can be a role model for young girls to show that they can go on to reach the top echelons of the sport if they want to. Photo courtesy of Kosovo Basketball Federation.

You mentioned that getting more women into different roles in basketball is an important part of your women’s strategy. Does that include management positions, for instance within the Federation.

Yes, this is the most important thing — to get more women in as managers, in clubs and in the Federation.

I always go into cities when we organize women’s projects. And I always mention this: You have to dream, because when you dream, you have to dream big. And because I had a dream, I had the dream of one day becoming a good manager. And, here I am. So I have given them hope and a dream that one day they can become a secretary-general, a manager or whatever they want.

I always mention this, because I started to play basketball in 1996. And now we are in 2020. And I never stopped being part of basketball.K

This article has been edited for length and clarity. The conversation was conducted in English.