Frisson is bound to leave a mark - Kosovo 2.0
Blogbox | Music

Frisson is bound to leave a mark

I have had my share of metal music throughout the ‘90s and, at one point, got bored of it all. It was nu metal that in my opinion destroyed what metal stood for — that it somehow transformed angry looks into fashion icons, where once the darker and brutal idea of music became an MTV trend, a drastic shift from the deep and meaningful lyrics of Blessed are the Sick or Master of Puppets to the superficial Nookie.

So I sticked to what I felt was the most representative style of metal and a reference to any point in time — the late ‘80s to mid ‘90s of Slayer, Metallica, Machine Head, Morbid Angel, Death, Suffocation as well as some more recent bands. They all stood the test of time; some are still active, some are on the verge of breaking up, but all remain extremely important fixtures in the world of metal or extreme metal.

Many of us metalheads of the ‘90s have married, had children, some are even government ministers, some got fat and some even became techno DJs (guilty as charged on the last two counts). But no matter the profession or direction in life, metal remains the bond between us. There are even those who jokingly say, “Toton, you were a good kid but then you became a DJ.” No hard feelings, as anybody is free to pursue what they like. But strangely enough no matter your choices in life or musical direction, metal continues to resonate.

I blast Master of Puppet or Seasons in the Abyss on a daily basis. So no matter what, we have somehow remained metal fans and that says it all. Metal is not pop. Once it finds its way into your ear, it will remain there forever, like a forgotten missile in some nuclear silo, somewhere in the Nevada desert or Siberia, just waiting to be activated.

Two weeks ago, a friend invited me to a small ‘private show’ of local punk and metal bands, called Resist Winter Gathering. Although struggling with a persistent flu, I had this calling to rise from the bed, ditch the pijamas and head to the show.

The place, which is kept secret in the industrial area of Fushë Kosovë, took over half an hour to find. Searching for it took me back to the years of searching for illegal shows in London; my heart was pumping, combined with a gut wrench, similar to the unpleasant feeling that I still get before my DJ shows; a rush more mystical than a promaja, but that I have learned to trust that something magical is about to happen.

As we found the place, I learned that it was in fact a very comfortable practice room, with a fair share of investments in acoustics (a rare sight even for professional touring bands); cosy and warm for a winter night, and a lot of free beer. The place has been set up by the members of the veteran metal band Diadema, who also run the independent label Defy Them.

Prior to the show there was a discussion on the metal scene of Kosovo, which we sadly missed as I would like to give my two cents on the subject. But, I got to hear the first band perform — Sotap, a three-piece band, a guitar on an octaver to mimic the bass and a drummer. I wasn’t sure whether they were playing  their songs or covers of some obscure Fuggazi era band. But their very interesting blend of metal, nu metal (the good side of it) with some Helmet style guitars and noise punk/rock was a great opener for the show.

Next on were Pink Metal, the best name for a band that play the strangest blend of punk, new wave, metal and everything in between. They are serious and professional but have this humor in the music that would put Lawnmover Deth, or even Primus, to shame and in search of a new direction; superbly, original style of music that is difficult to pigeonhole. 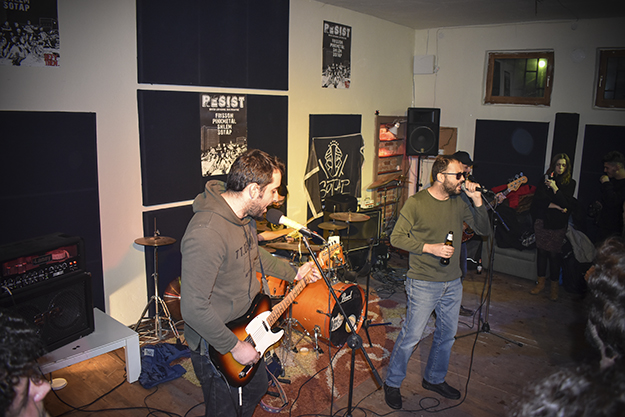 Their drummer plays the strangest rhythms, dare I say polyrhythmic, that in an overly, quantised world would crash any computer trying to keep up. Pink Metal are the local heroes that just about everyone in the audience knows their lyrics and sings along.

Shlem, the third band on the bill, sounded as an earthquake, yet with a slower, stoner sludge metal type that got me back to the days of Crowbar and whatever Phil Anselmo does. I could easily see this band chilling out on the porch of Phil’s backyard.

I must admit that Sludge metal was never my favorite style of metal. But bands such as Crowbar, Eyehategod and Down always managed to stand out and our local Shlem did just that — play that sludge as sludgy and dirty as it can, all while retaining the energy in the room (rather than some Doom or Stoner metal bands that can often get you to sleep). They did perform some numbers by one of my least favorite bands, Korn; but somehow, I liked them better in playing Korn than when I saw Korn play their own songs live.

How Frisson’s music combines the old and brings the new

Before I turn to the last band on the bill, or dare I call them headliners, rarely have I witnessed such an enthusiasm coming from just about everyone at a concert — from band members of other bands to visitors of a show. Next up were Frisson, who are regarded a legendary band already.

Frisson recorded their first album, called Exit Denied, when they were just 16, which surely wasn’t the best production ever. But a band this young to have such a large fanbase is extremely rare these days; for a matter of fact, any other days.

After a quick soundcheck that lasted no more than three minutes, the boys ripped through their first number with a ferocity of all nuclear bombs tied together in one single blast.

They are young, just around 20 years old, energetic, with a strong stage presence and confidence of a band that has been touring for 30 years.

Now, without blowing things out of proportion, I have seen my share of bands in the ‘90s — from the local London legends Decomposed to Morbid Angel, Pantera, Death, Slayer, Sepultura, Metallica, Napalm Death, you name it. I have seen them all, twice or more, and I can see Frisson up there with them, sharing the same stage and not giving a toss about it.

One cannot remain objective when witnessing a band of such talent, particularly in an extremely saturated scene, where it takes lots of talent to stand out. Also, it takes guts to do what you want in an economically and politically unstable country, as in Kosovo, where life lasts 24 hours and nothing can be planned ahead. So, to do such music for passion can only be applauded amongst the commercial music scene, which is only reserved for pop buttocks, hip hop and dj’s.

Playing in a metal band in Kosovo is the worst ‘career choice’ one can make. But playing with passion, love and dedication, as Frisson do, can without doubt land them a record deal that would get them touring worldwide; being an original band in a sea of copies.

Frisson plays extreme metal, not everyone’s cup of tea; but their live performance is an experience in and of itself.

They are young, just around 20 years old, energetic, with a strong stage presence and confidence of a band that has been touring for 30 years. They do not miss a beat, not even a note; yet, they play highly technical stuff that would put even the most major players to shame. 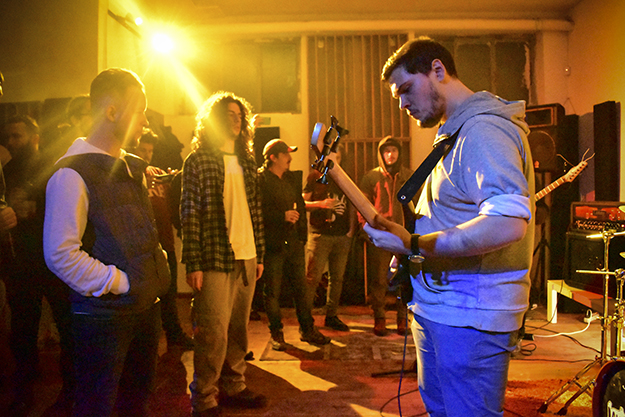 While I do not know any their songs, I somehow keep on hearing them in my head days after the show. It was only after listening to Sepultura’s groundbreaking album Arise for the first time that I had such an experience. Sepultura comes from Brazil, Frisson come from Kosova, two bands from two geographic extremes but that have a few  things in common — both come from countries known for some kind of political or social turmoil, as well as for having a distinct musicality and groove.

Stylewise, Frisson plays just about everything you might have heard in terms of extreme metal. And while in 2018, it is musically and sonically challenging to come up with something, dare I say new, Frisson also does just that. They do so by combining many styles of metal into one pot.

You got death metal, black metal, extremely technical metal, even some groove metal in the mix, but all served with, an interesting blend and a formula that never gets you bored; a style that will see the boys do very good as a band, and instantly win hearts and new fans worldwide.

Then, there was the drumming, which at a point got me scared — that if he were to miss a beat, the whole government could collapse. Yet the drummer managed to keep the band together in a pace, tightness and an intelligence that would normally be attributed to drumming legends of extreme metal. In order to play like these legends, and at such an early age, is nothing but pure genius.  Drumming in metal is like eating, sleeping, running, walking, singing and talking all at the same time; yet Frisson’s drummer, Lumi, manages all that and even smiles and headbangs at the same time.

The guitar duo, Ilir (also vocals) and Galdon, seem to be the telepaths in the band. They both play with a razor sharp accuracy, they do not overlap one another, and they each have a distinct sound that does not make it hard to tell who is playing what, which is not always the case.

I am a chainsmoker, but I forgot about that dose of nicotine while watching Frisson play live.

One thing I never so much agreed with in metal is that bass was always somehow buried in the mix. But the band knows what bass is and what it is supposed to do — that is, low and subby and metallic, all at the same time, while retaining its musicality. So, it did what bass is supposed to do, drive the band but keep everything together. The bassist, Shpetim, is a master in this, both in playing and in stage presence.

The vocals Ilir (vocals and guitar) did not sound too guttural either — for example, Cannibal Corpse — but more like early Dave Vincent mixed with a bit of Chuck Schuldiner and Glen Benton’s trademark high pitch scream. To be frank, a very good choice of vocal style as the guttural style just doesn’t cut it for me and somehow lowers the energy of the music.

I am a chainsmoker, and it was not allowed to smoke inside. But I forgot about that dose of nicotine while watching this band play live.

Frisson played around a 60 minute set, and in the end it felt like five minutes. I wanted more, everyone wanted more, but that was it. So, I went home and thought about telling everyone that there is a band in town that you must see live, who might just change you forever.

Frisson are currently working on their second album, which is expected late spring 2019. They will be playing on January 1, 2019, at Termokiss, together with the Sotap, Shlem and Pink Metal. Meanwhile, you can also check Frisson out in their official Facebook page or official Youtube channel.