The Balkans are also complicit.

Over the past few months, images and reports out of the U.S. show a system bursting at the seams. With the world’s highest number of COVID-19 deaths, 41 million unemployed, bleak economic prospects, and unabashed continuation of police brutality and systemic racism, the country’s long-standing myth of exceptionalism has been shaken to its core.

The many and varied crises have now reached their tipping point with the murder of George Floyd in Minneapolis. Caught on video, the horrific incident sparked outrage and prompted massive protests that continue across the country.

With a president who openly advocates a violent crackdown on the protests, and whose response included a perverse photo-op holding a bible in front of a boarded-up church, can America truly alter its course before it’s too late? 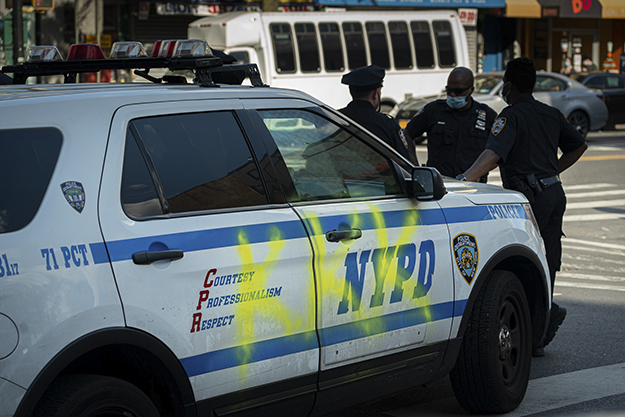 Tens of thousands of people went onto the streets of NYC, joining others around the US, to protest racism and police brutality. Photo: Amir Husak

Further, how will these developments play out on the international stage, where other struggles against racism and police brutality are enacted out every day?

Racial injustice and white supremacy are not, nor have they ever been, solely American problems. Although the contexts and historical trajectories vary greatly, the Balkans and the whole of Europe need to face their own complicity in the violent oppression of racial and ethnic minorities.

Racial justice will not be achieved without the transformation of economic systems.

Like COVID-19, police violence and racism are deadly and widespread diseases that need to be confronted with vigor and determination. Protests in the U.S. could serve as an inspiration to amplify the regional voices of the oppressed and, first and foremost, challenge the European Union’s catastrophic migration politics and racist policing that have turned the Mediterranean Sea and the Balkan Peninsula into a mass grave for thousands of people seeking a better life.

It is also important to remember, as Michelle Alexander reminds us, that racial justice will not be achieved without the transformation of economic systems. As we go forward, the damage done by years of austerity, divesting from social and public services, and rampant exploitation of labor will have to be addressed.

This is the time for building many solidarities.

Defunding police departments and repealing legislation that protected police officers — proposals that were considered too extreme or too fringe to actually happen —  are realities now because of the protests.

In fact, the current protests could be America’s best chance to break free from the death grip of white supremacy and racial injustice.

This momentum, to paraphrase Keeanga-Yamahtta Taylor, is remarkable in its solidarity across racial groups and builds on the awe-inspiring work of previous iterations of the Black Lives Matter movement.

Others are beginning to take notice. 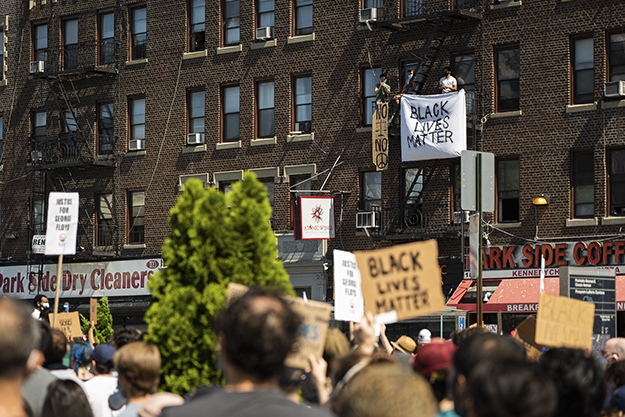 The question remains: How will the protests transform other parts of the world? Photo: Amir Husak.

Across the world, people are gathering and marching in support of the protests. Just a few days ago, the streets of London, Berlin, Paris, Adelaide and many other cities were filled with protesters who, in solidarity, exclaimed: Black Lives Matter! Some are using the opportunity to identify and condemn racism in their own midst, challenging the whitewashed narratives and calling for decolonization.

In Bristol, for example, protesters took down a statue of infamous slave trader Edward Colston and tossed it into Bristol Harbor. In Australia, protesters drew attention to racial profiling and police brutality against the indigenous, many of whom have died while in police custody in recent years.

These symbolic acts tell us that the effects of Black Lives Matter protests in the U.S. are already far reaching and could potentially transform race relations in ways previously thought impossible.

What will this mean for the Balkans where, paradoxically, some of the most critical human rights initiatives have been supported by U.S. based institutions, government agencies, NGOs and aid programs?

The Balkans have their own particular brand of racism and police violence that is used against black and brown bodies. What most of the countries in the region have in common is, first and foremost, a long and shameful history of discrimination and violence against the Roma community.

Continually persecuted, the Roma have suffered economic, political and social discrimination at the hands of all regional governments, both past and present.

Institutional racism against Roma is evident in judicial discrimination and violent police attacks across Balkans. In this context, it is also important to note the normalization of various kinds of oppression against other ethnic minorities and LGBTQ groups continues unabashedly.

Since 2015, we have also witnessed rampant police violence against migrants who are in transit on the so-called Balkan route. Reports of abuse came from every country in the region, but for the sake of brevity I will mostly refer to what is happening in Bosnia and Croatia, and what I have witnessed firsthand. 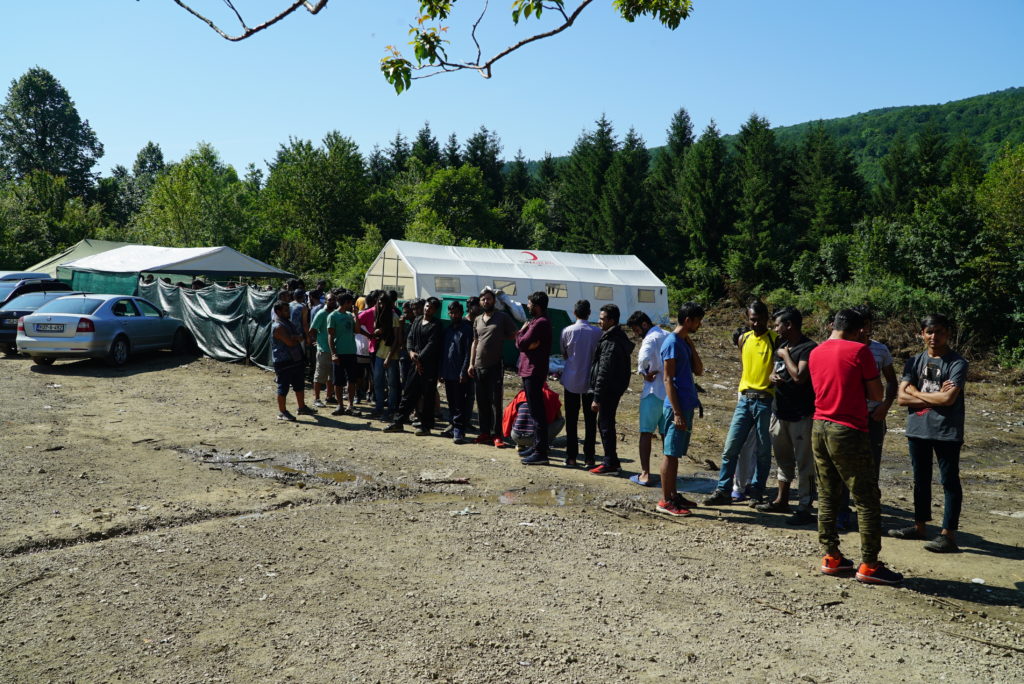 Vučjak, a makeshift camp in Bosnia that existed for six months, is the ugly face of migration policy in Europe. Photo: Amir Husak.

Migrants, most of whom are fleeing conflict and poverty in the Middle East, Central Africa and South Asia, find themselves trapped between borders and at the mercy of police batons, dubious International Organization for Migration (IOM) operatives, and angry local mobs.

Relief workers, medical personnel, and UN officials report systematic abuse and violence carried out by police, with migrants being robbed, beaten, and humiliated in the most disturbing ways.

Incidents of migrants being shot and wounded have become a commonplace occurrence, including the severe wounding of two migrant children by Croatian border police in May 2018.

Last summer, images and reports from Vučjak, the infamous open-air camp in northwestern Bosnia, truly epitomized both the plight of the migrants and the inhumanity of local authorities.

Aside from groups of compassionate aid workers, the International Committee of the Red Cross (ICRC) volunteers and local activists, no one really cared about the dismal conditions in the camps.

Situated on a former landfill outside of Bihać, surrounded by land mine fields (leftover from the 1990s war) and thick forest, the makeshift camp was erected by the local government to solve the region’s “migrant problem,” i.e, to forcibly remove all migrants from the city proper.

Bodies of many migrants have been laid to rest in local graveyards, fields and forests, inscribing the already tainted landscape with the horrors of yet another tragedy.

Guarded by police and lacking running water or electricity, the camp became a real life purgatory and quickly reached a state of emergency. After six months of operation, Vučjak was finally closed in December of 2019. But the humanitarian crisis did not go away.

The situation continues to claim lives as migrants face over-exhaustion and injuries that are due to police brutality, poor shelter conditions, accidents, physical altercations, and a host of different diseases.

Over the last five years, bodies of many migrants have been laid to rest in local graveyards, fields and forests, inscribing the already tainted landscape with the horrors of yet another tragedy.

On top of that, the vitriolic portrayals of migrants by the media only exacerbate the situation and often turn latent local racism into full-fledged expressions of hatred and violence.

With COVID-19, the scope and depth of this crisis continues to expand. More recently — perhaps unaware of the striking similarities to right wing populism in the U.S. and elsewhere — regional showbiz celebrities have begun to announce their plans to run for office to stop the migrants from “ruining our cities.”

One of the most moving and powerful moments at the protests in the U.S. are the group chants of the names of those who suffered at the hands of police: George Floyd, Breonna Taylor, Ahmaud Arbery … the list is long. Too long. 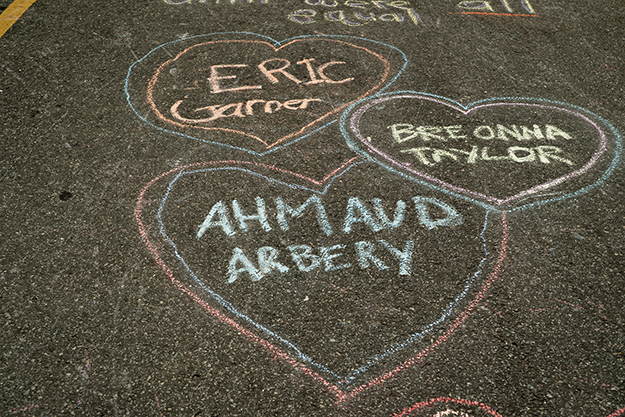 The names of those who suffered police violence are to be seen and heard everywhere. Photo: Amir Husak.

Saying their names will not bring them back, but it is necessary in order to lift up their stories, know who they are and why they suffered such an awful fate.

Aside from honoring the lives lost, the chants are also poignant calls for justice.

Let us not forget that the Balkan route has its own tragic list of names. At the protest in support of Black Lives Matter in Zagreb the other day, a young woman held up a sign that said: “Justice for Madina Hussiny,” a 6-year-old girl from Afghanistan who was killed by a train after the group she was in was pushed back across the border by Croatian police.

One cannot help but wonder, how many of us can recognize that name and what does it mean to us?