Greeks not ready to give up the name Macedonia - Kosovo 2.0
Lately | North Macedonia

Greeks not ready to give up the name Macedonia

“We came today from many parts of Greece to say it clearly: Every Greek is Macedonian and every Macedonian is Greek!” a voice from the loudspeakers echoed through Syntagma Square in Athens on Sunday (Feb. 4). The crowd covered the square in blue and white flags, cheerfully responding with: “Hands off Macedonia!”

For another Sunday (the second in the last two weeks) over 100,000 Greeks rallied outside the parliament in Athens to protest against use of the name Macedonia by its northern neighbor.

The Macedonia name dispute is a hot potato in Greece at the moment. Politicians are attacking each other, while social media is burning with comments of “unfairness towards Greeks.” The entire topic has occupied and united Greek society more than any other issue in decades.

On the day of the protests, Greeks from all over the country poured into the capital. According to police sources, almost 300 buses arrived in Athens, bringing in tens of thousands of protesters.

The region of Macedonia spreads across three countries — Greece, Bulgaria and what was once the Socialist Federal Republic of Yugoslavia. When Yugoslavia began dissolving in 1991, one of its former republics declared independence under the name Macedonia.

Ever since, Greece has argued that use of the name implies territorial claims on its own province of Macedonia, apparently once home to Alexander the Great, who is sometimes referred to as Alexander the Macedonian in the Balkans.

Due to the dispute, Macedonia’s attempts to join international institutions, including the European Union and NATO, have been repeatedly vetoed and blocked by Greece.

In daily life Greeks refer to Macedonia as “FYROM,” an acronym standing for the “Former Yugoslav Republic of Macedonia,” or simply naming it Skopje, after its capital. The name Macedonia is never used when referring to their northern neighbor. Because of the name dispute, even at an international level, Macedonia is often referred to as FYROM. 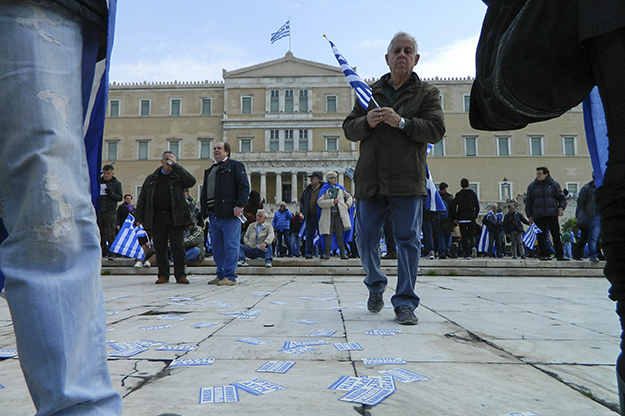 Hundreds of thousands of Greeks came out onto the streets of Athens and Thessaloniki chanting “Macedonia is Greece.” Photo: Katja Lihtenvalner.

Last month, the two countries attempted to start negotiations to solve the 27-year-old naming dispute, with talks mediated by the United Nations. On Feb. 7, a couple of days after the protests in Athens, Macedonian Prime Minister Zoran Zaev told the media that his country is willing to change name. So far, there are a few proposals: Upper Macedonia, New Macedonia, Northern Macedonia and Macedonia (Skopje).

Even though officials in Athens welcomed this statement from Zaev, it is still not sure how it will be accepted by the majority in Greece.

“Macedonia is one and it’s Greek, that’s the only historical fact. They want the name because they also want our territory. Will we allow them?” resounded from the loudspeakers in Athens’ Syntagma Square. People raised their voices: “We will not give up, until they say we are right!”

“Centuries ago blood was spilled for independent Macedonia and now they want to take your dear Macedonia away from you,” the voice continued. The crowd was as a well-tuned choir, answering: “Hellas, Hellas, Macedonia!”

Among the crowd were politicians from opposition parties, including center right party New Democracy, social democratic party PASOK, the Union of Centrists and the self-proclaimed fascist party Golden Dawn. There were also members of the ruling party Syriza’s only coalition partner — Independent Greeks.

Zorba the Greek among protesters

Also at the demonstration was 93-year-old composer, Mikis Theodorakis, an icon of the Greek left, a nationalist, and a political prisoner during Greece’s military junta in the late 1960s.

“Dear Greeks, my brothers, fascists, Nazis, terrorists, anarchists, bullies,” the composer of “Zorba the Greek” began his speech. The crowd was sent into a frenzy, shedding tears and chanting while he was reading. A huge banner was unveiled: “Macedonia is Greece.”

“Yes, I am a patriot. I will always fight against fascism in all its forms, especially against the most dangerous one: left-handed,” said Theodorakis, who was an MP for the Communist party between 1981-90. “We are governed by traitors who are destroying us.”

During the NATO bombing of Serbia, Theodorakis publicly supported Milošević’s government and organized concerts in Belgrade and Athens in 1999. After Kosovo declared independence, Theodorakis blamed the U.S. and claimed that “devious plans” are being developed “against our country on the basis not only of the Aegean sea and Cyprus, but the Muslim minority in Thrace, which, following the example of Kosovo, may demand its independence.”

At the rally on Feb. 4, Theodorakis demanded a “referendum over the Macedonia name dispute.”

According to opinion polls, if a referendum were to take place today, between 70 and 75 percent of Greeks would not accept any reference to the term Macedonia by their neighbors.

While dealing with the Macedonia issue, Syriza, a left wing party elected on its anti-austerity plans three years ago, finds itself in solitude. Its approach to the name dispute, and search for a political solution, has no support from their only coalition partner, the right wing Independent Greeks.

This week, politicians from Syriza and the Independent Greeks began to wash their dirty laundry in public, getting into a war of words in the media.

Syriza MEP Dimitris Papadimoulis labelled the rally “far right,” leading to supporter of the rally and Independent Greeks MP, Dimitris Kammenos, calling Papadimoulis “a spy politician” and demanding that the government to “listen to the people’s voice.” 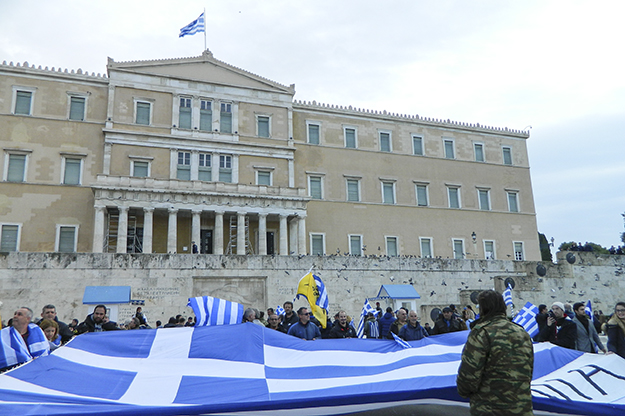 The protests in Athens came at a time of low popular support for majority ruling party, Syriza. Photo: Katja Lihtenvalner.

Polls taken at the end of 2017 show that Syriza currently has low levels of support among the Greek public, with only around 16 or 17 percent indicating their intention to vote for the ruling party. The right wing New Democracy, who, together with social democrats PASOK, ruled the country for four decades, is again leading in all the polls.

Despite these low numbers, members of the government dealing with the Macedonia issue insist that they have a mandate to act for the country.

Minister of Foreign affairs, Nikos Kotzias, who is part of the “Macedonia negotiation process” labelled the protest a political move and restated the validity of his work. “The nakedness of New Democracy was obvious,” Kotzias tweeted. “Millions of Greek patriots made their choice. So, I continue with a quiet conscience and responsibility to negotiate for the good of the country.”

Nazis infiltrated in the rally

The unstable political situation adds fuel to the dangerous ultranationalist fire. Members of Golden Dawn, whose senior members have frequently expressed admiration of Nazism, gathered outside its headquarters in Athens a day before the rally, chanting against Macedonian citizens and burning the Macedonian national flag.

During Sunday’s rally they appeared without their recognizable symbols t-shirts, flags or hats, and merged into the crowd holding a huge banner: “Greece belongs to Greeks!”

Supporters welcomed them warmly and there was a long line for a photo opportunity with “the playboy of the Greek far right,” 37-year-old Ilias Kasidiaris.

After the rally finished, a neo-nazi group threw stones at the occupied Embros Theater in the center of Athens, well known for antifascist action, as well as migrant and refugee supported cultural events.

“Macedonia belongs to its bears”

Parallel to Sunday’s nationalistic rally, around 1,000 people gathered just a hundred meters away from the parliament to oppose the demonstration.

“The nationalist mobilization does not continue the anti-austerity struggle, but rather the opposite,” the organizers stated on social media. “We are talking about urban counterinsurgency, from which the only winners will be the supporters of the right wing and their fascist wing.” 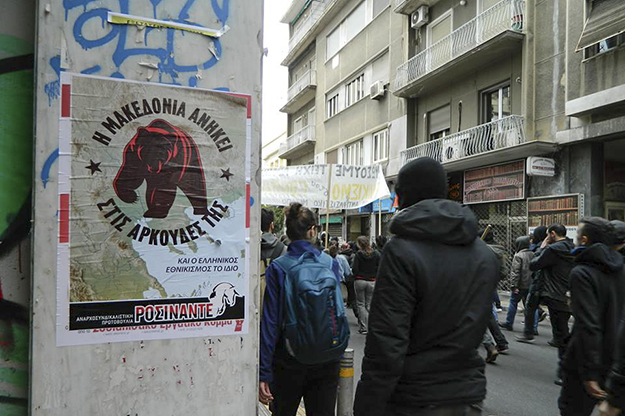 Anarchists and leftists gathered to oppose the nationalist rally, answering the protest with slogans including “Macedonia belongs only to its bears.” Photo: Katja Lihtenvalner.

The anti-rally, which was isolated by the police forces so that the two groups could not meet, was attended by mainly anarchist groups. “Peace to the Balkans, war to fascism and imperialism,” and “Macedonia belongs only to its bears,” was written on banners at the gathering.

Other smaller left wing parties Antarsya and Popular Unity, led by former Syriza minister Panagiotis Lafazanis did not take part in the rally against gathering in Syntagma, but in public statements condemned the nationalist event.

However, the rally in Syntagma Square did find one unlikely supporter from the Greek left, Zoe Konstantopoulou, who had previously served in Alexis Tsipras’ first government as president of the parliament. After leaving Syriza, she formed her own party, Course of Freedom, in 2016.

In the last 25 years (in 1992 in Thessaloniki 1 million Greeks gathered to oppose the name Macedonia) not austerity measures, nor the fight for existence in a crisis-hit country, has inspired Greeks to occupy the streets and protest with such a passion as there is over the current nationalistic campaign over the name Macedonia.