Today, on the International Day Against Homophobia, Transphobia and Biphobia (May 17), activists in Kosovo have put the focus on hate speech against LGBTI persons. The day that is aimed at raising awareness of LGBTI rights and violations worldwide is being marked in Kosovo with an exhibition in Prishtina’s Zahir Pajaziti Square highlighting comments containing hate speech against LGBTI individuals.

The 16 photographs exhibited today are a collection of screenshots of comments posted beneath articles or individual social media posts following Kosovo’s first ever Pride Parade on October 10 last year.

Some of the comments seen in the screenshots include: “Only Hitler and Enver Hoxha could do the right thing to them, with all of them in a mass grave so the virus doesn’t spread,” “Murder to faggots,” and “They either need to be treated as sick and be hidden until they get cured, or they need to be killed in order not to damage society.” 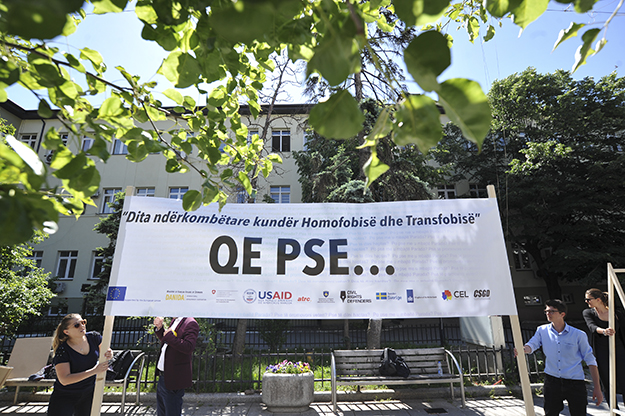 LGBTI activist Lendi Mustafa explains that the idea behind the exhibition lies is the need to emphasise the presence of hate speech and discrimination against LGBTI persons, which tend to be neglected or belittled.

“The idea is to show the homophobia and transphobia that is present in Kosovo,” Mustafa says. “Because we often get comments such as, ‘Why are you coming out?’ and, ‘Why are you promoting yourself?’”

Mustafa is the first transgender person to have come out publicly in Kosovo and made a poignant and emotional public speech during the first Pride Parade, which marked a historic moment for LGBTI activism in the country.

“One of the things I received is this video that shows ISIS fighters throwing a gay person from a roof, with a comment that this will happen to me.”

Although no incidents occurred during Pride, the following days saw hundreds of comments flowing to the social media accounts of LGBTI persons and supporters. After his prominent role during the parade, Mustafa received over 200 comments with discriminatory language in messages and in online comment fields.

“For instance, one of the things I received is this video that shows ISIS fighters throwing a gay person from a roof, with a comment that this will happen to me,” says Mustafa. He reported the comments to Kosovo Police, who he says chose to identify and investigate the authors of  around 10 comments that they perceived as a call for violence; he says police didn’t considered the other comments to be threats, but to be merely offensive.

In January, Kosovo Police told K2.0 that they had received two cases of ‘threats’ and two more of ‘attacks’ relating to hate speech comments in 2017, and they had been proceeded to the State Prosecutor. K2.0 contacted the police to ask specifically about the status of the cases reported by Mustafa, and is waiting for a reply.

For Blert Morina, an LGBTI rights activist and executive director of the LGBTI rights NGO Center for Equality and Liberty, Kosovo Police failed to show a willingness in investigating the hate speech directed toward LGBTI activists and members.

“It is to be expected that such comments will occur. But I don’t understand when there are such comments reported to the police and the persons [who made the comments] are never even called for an interview,” Morina says. “They need to make it known that one cannot go out and openly make such comments. In this way they are giving the right to the person to continue spreading hate speech.”

Morina adds that Kosovo Police could have at least made a public statement condemning the hate speech following the Pride Parade.

Over the years, members and vocal supporters of the LGBTI community have often been the victims of threats and calls for violence. In 2016, the former executive director of good governance NGO Lëvizja FOL, Petrit Zogaj, received numerous threats after he took part in a discussion on LGBTI rights on one of the nationwide TV channels. Earlier this year, The Basic Court of Prishtina fined two persons 200 euros each for their roles in the incidents.

“The sentence is 200 euro for each one. Good. I believe that these two persons have received a lesson, although, considering this kind of sentence, the same people are ready to threaten each day,” Zogaj wrote following the verdict in January. 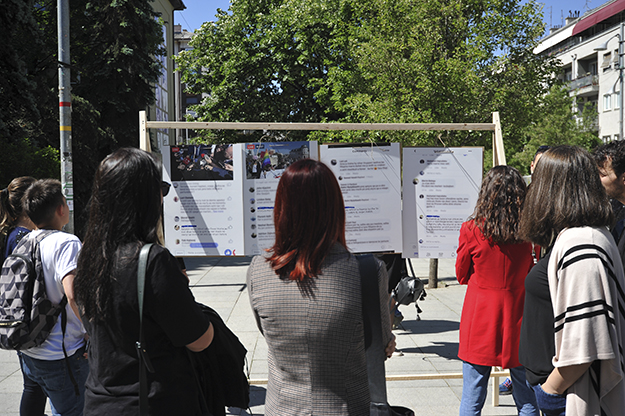 LGBTI activists consider Zogaj’s case to be rare when it comes to LGBTI rights in that it has gone through all the judicial steps to a final court verdict.

Another is a case from Ferizaj, with the city’s Basic Court in 2016 convicting two men involved in an attack on two LGBTI activists earlier that year. However, activists point out that in this instance the justice sector did not prosecute the incident as a hate crime, which would have resulted in heavier sentences.

Campaigners are currently calling for an update to the Article relating to hate crimes in Kosovo’s Criminal Code, which is currently undergoing a redrafting, so that it specifies crimes committed on the basis of ‘sexual orientation’ and ‘gender identity.’ Currently, Article 147 covers violence toward “national, racial, religious, ethnic or other such groups.”

Activists also suggest that the representation of LGBTI persons in the media triggers misconceptions and ultimately contributes toward discriminatory comments beneath the stories.

A 2017 report on media coverage of LGBTI persons in Kosovo highlights that despite an increased interest and improvement in covering the community, hate has often found a place in media stories. The report also says that many stories continue to be filled with stereotypes that strengthen a societal misconception toward LGBTI issues, while leaving huge space to those with homophobic attitudes and less space to activists talking about rights.K

This article was produced by Kosovo 2.0 as part of the Equal Rights for All which is an EU funded project managed by the European Union Office in Kosovo.  The contents of this publication are the sole responsibility of the project and can in no way be taken to reflect the views of the European Union.