How a Jewish doctor found his home in Prizren - Kosovo 2.0
Blogbox | Human Rights

How a Jewish doctor found his home in Prizren

The man who saved countless lives in Prizren.

“Home is where someone notices when you are no longer there.”- Aleksandar Hemon.

Dr. Josef Teitelbaum entered our lives one cold spring day in Prizren in 1941, through a large wooden gate, over a little stream that ran through our family home’s yard, carefully walking on cobblestones that my grandmother probably swept first thing in the morning.

My worried grandfather must have ushered him in, and taken him upstairs where his newborn son, my father, was developing some symptoms his doting parents, uncles and aunts had never seen before.

My then, 8-year-old aunt was standing by the door of their bedroom, crying inconsolably. At that moment she thought she was going to lose her little brother.  Dr. Teitelbaum was muttering something to himself in a language they didn’t understand. He then told them he must run home to get something.

Dr. Teitelbaum most probably saved his life, and so I am here today, thanks to him, piecing a story together — a story that has been haunting me since last summer.

The wooden clock with hand-painted lilies was ticking eternal seconds, and dusk was falling over the red-tiled roofs of Prizren, when Dr. Teitelbaum returned.

My now 85-year-old aunt who is almost completely blind today, told me last summer that she had to shut her eyes because she saw a needle in his hands. Whatever it was, it changed everything overnight. My father recovered and thrived. 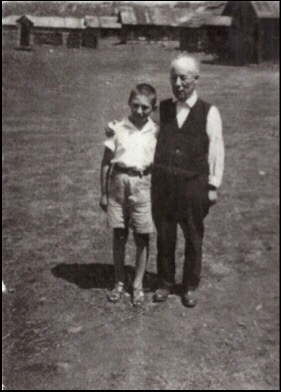 Dr.Teitelbaum most probably saved his life, and so I am here today, thanks to him, piecing a story together — a story that has been haunting me since last summer — when I discovered that the man who gave so much to the people of my hometown, lived his last days in a concentration camp.

Josef Teitelbaum was born in 1890 in Budzanov, Galicia, now Ukraine. He studied medicine in Vienna and served in the Austro-Hungarian Army in WWI. During one of his visits to Vienna he met Paula Weiselberg who later became his wife.

They moved to Prizren in 1922 where Josef became the principal doctor of the town and its surroundings. He must have treated all of Prizren’s inhabitants at some point of their lives, during more than two decades of his life there.

His only son Raoul was born in Prizren in 1931.

By the time he was walked into our family home in 1941, it felt as if he had always lived there.

He was revered by the people of my hometown, and his name is still uttered with love and the utmost respect by the ones who survived him — in many cases due to his excellent care.

The elegant, energetic bespectacled man, always rushing somewhere, carrying the fate of so many people on his shoulders and inside his gigantic weather-worn bag, thus became an honored citizen of Prizren.

By the time he walked into our family home in 1941, it felt as if he had always lived there.

That same year, though, everything started to crumble before Teitelbaum’s eyes.

Kosovo and Albania were occupied by Italy. Italian fascists captured Dr. Teitelbaum in the summer of 1941 or 1942, and transported him to a labor camp in Albania where he had to treat their troops.

His wife Paula and son Raoul stayed behind in Prizren, but were soon thrown out of their house by the fascists.  Their neighbors Dragutin and Ana Jakić took them in, sheltered them and hid their documents and valuables — among them Josef’s medical diploma and his handwritten manuscript on the uprising of the Jews in the Roman Empire.

Raoul visited his father in Albania. That visit, captured in a black and white photograph, was the very first picture I saw of Prizren’s beloved doctor who touched the lives of my family forever.

Father and son smiling, were unaware of the perilous, tragic path awaiting them only a few months later.

I look at the photograph today, wondering if perhaps Dr. Teitelbaum told his son that day how everything will be alright, like in those rare candle lit nights inside old Ottoman houses of Prizren, when he gave moments of false hope to terminally ill patients, their pleading faces reflected in his round glasses and tired eyes.

He stayed in the camp in Preza, Albania until Italy’s capitulation in 1943. His whole family then joined the Albanian partisans together with 500 other camp prisoners, to fight against German troops. Dr. Teitelbaum looked after the wounded, but due to his deteriorating health, returned to Prizren only to be captured again — this time by the Nazis in May 1944.

The man saved countless lives, yet his life, like the lives of millions of his own people became worthless overnight.

I can’t begin to even imagine the anguish and the pain in his soul as he was sitting in silence, next to his beloved wife and son, on the train heading towards the Sajmište concentration camp near Belgrade.

After six weeks, they were transported to Bergen-Belsen. All three contracted typhus but Dr. Teitelbaum was too frail to fight it.

On April 9, 1945, just a few days before liberation, Paula, Josef and Raoul Teitelbaum, together with other prisoners of Bergen-Belsen, were put on what became known as the “Lost Train.”**

He must have died for the hundredth time on that journey to nowhere. It lasted for almost a fortnight.

He was 55 years old, having lived entire lifetimes between empires, fascist regimes, regular persecution. He witnessed unimaginable scenes of suffering and inhumanity. The man who most probably saved my father’s life and countless others. Yet, no one was there to help save his.

Raoul, who was 14 years old at the time, buried his father with his own hands and the help of a Russian soldier. They put a wooden sign on his grave.

No child should ever have to go through such pain.

He left an indelible mark in my hometown and the collective memory of its people.

The people of my hometown were waiting patiently for their beloved doctor to return. Different stories were circulating. In all of them he was alive and well, soon to resume his duties as before.

The news of his death arrived that summer, when Raoul and his mother returned to Prizren. The whole town mourned him.

He left an indelible mark on my hometown and the collective memory of its people.

Raoul lives in Israel today, keeping the memory of his father alive, and of those who helped them in their darkest hour. 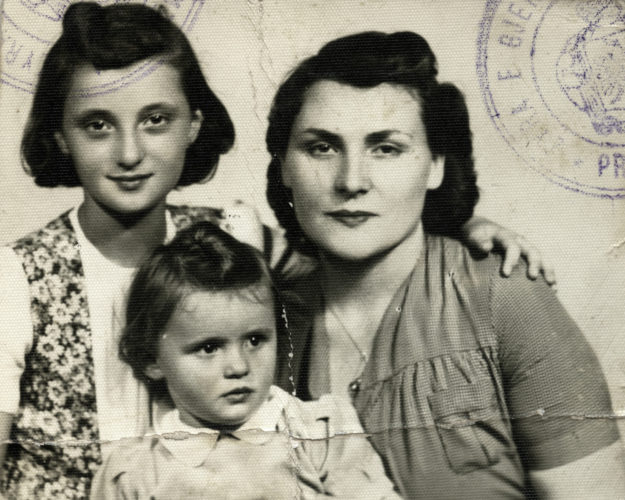 Ana Jakić and her daughters, Prizren 1944. Photo: The Private Collection of Raoul Teitelbaum, gifted to the United States Holocaust Museum.

I didn’t have the heart to tell my aunt about Dr. Teitelbaum’s deportation to a concentration camp, and all the suffering that ensued, after she finished telling me about that fateful day in our family home. It now only exists in photographs and in one painting.

I held her beautiful purple-veined hand, and looked into her wise eyes that could barely see me. She pronounced his name so beautifully. It sounded like Tatli*-baum.

“May he rest in peace forever, ” she whispered. She took her prayer beads and I lost her for a few minutes.

I covered her frail little body as she was taking a nap. I saw a tear drying on her wrinkled cheek.

She drifted away, to that very moment more than 78 years ago, when a bespectacled, kind man saved her youngest brother’s life.

“He who saves just one life, saves the world entire.” – Jewish, Muslim and Christian Proverb.

Feature photo: All photos are from the Private Collection of Raoul Teitelbaum, gifted to the United States Holocaust Museum.

**The Lost Train – In April 1945, just a few days before the liberation of the Bergen-Belsen concentration camp in Germany. The Nazis were in a hurry to get rid of the prisoners and as much evidence as possible. Three train transports left the camp between April 6-11, each consisting of about 2,500 prisoners. Their destination was the Theresienstadt concentration camp in German-occupied Czechoslovakia.

Ultimately, only one train reached the camp, after a few dozen of its passengers were killed in an aerial bombing by Allied forces. A second, later known as the “Lost Train,” traveled for two weeks back and forth between  enemy lines and was caught in Russian-German crossfire. Ultimately it came to a halt near the town of Troebitz, in eastern Germany, where the prisoners were liberated by the Red Army.