Infrastructure blocked for people with disabilities

Tens of thousands unable to access buildings, streets and services.

For Mexhid Foniqi, completing everyday tasks taken for granted by most can be a struggle. Going for a stroll, getting to work, taking a document to the municipality — all require advanced planning, and often a reliance on others to help out.

Foniqi is blind, having lost his sight 40 years ago. He was fully sighted until he was 20 but then during his time as a philosophy student at the University of Prishtina in the 1980s he contracted the rare immune-based disease, Morbus Behcet, which resulted in his permanent loss of vision.

Having previously been fully sighted, Foniqi still has strong recollections of viewing the things around him. “I know how the nature looks, how the world looks, and it was very difficult to adapt. But the need imposes this on you.” he says. “I was lucky that I got married at an early age. Because my wife would come with me to university, take the material, record it and read it for me later.”

He graduated in 1983 but has never practised his profession. Instead, he takes a taxi every day to go to the Kosovo Association of Blind People in Prishtina, where he is the executive director. For Foniqi is almost impossible to make the journey by foot; Kosovo’s roads don’t meet the standards of an inclusive environment with incorporated tactile paving — a system of textured ground surface indicators, detectable by a visually impaired person using their white cane, which assists their freedom of movement. 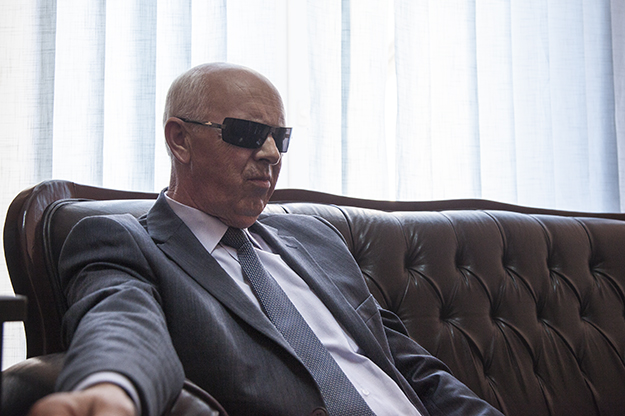 In recent years the Municipality of Prishtina has installed acoustic traffic lights, which audibly click when it is safe to cross to enable access to blind people. But only Garibaldi street, around Grand Hotel, has crossing points that actually direct blind people to the traffic lights through the use of tactile paving. Foniqi and other activists believe that the central location was chosen deliberately as “a camouflage to show that officials are trying to do something.”

Although blind people tend to retain a very detailed memory of the streets, corners and buildings that they have been to before, Prishtina’s unregulated post-war development, coupled with prolific illegal parking has hindered such an aiding process.

“A blind person doesn’t dare to go out alone with their stick — it’s impossible,” Foniqi says. “In the post-war era there has been real chaos in terms of traffic that makes it impossible to walk.”

The Association, a small space located within Banesat e Kuqe in the capital’s Sunny Hill neighborhood, serves as the only ‘going out’ place for Foniqi and others members of the Association; blind people and others with impaired eyesight spend their weekdays socializing there and participating in different activities, as well as developing advocacy initiatives for people with disabilities.

“A blind person doesn’t have full independence, just by the fact that they are subordinated to their accompanier.”

Head of the Kosovo Association of Blind People, Bujar Kadriu

Although many people with visual impairment visit the Association on a daily basis, the lack of adequate infrastructure in the surrounding area represents a small glimpse of the overall infrastructure deficiencies all over Kosovo, with the government and municipalities having failed to provide the conditions for independent movement not only for blind people, but for all people with disabilities.

There are no accurate statistics on how many people with disabilities there are in Kosovo. However based on World Health Organization estimates, which calculate that between 10 and 15 percent of the global population have a disability, it is estimated that up to 30,000 people in Prishtina alone have a disability.

Bujar Kadriu, head of the Kosovo Association of Blind People, asserts that it is impossible for blind people in Kosovo such as himself to be independent in daily life with solely their white cane for assistance. “As blind people we are not independent,” he says. “A blind person doesn’t have full independence, just by the fact that they are subordinated to their accompanier.” 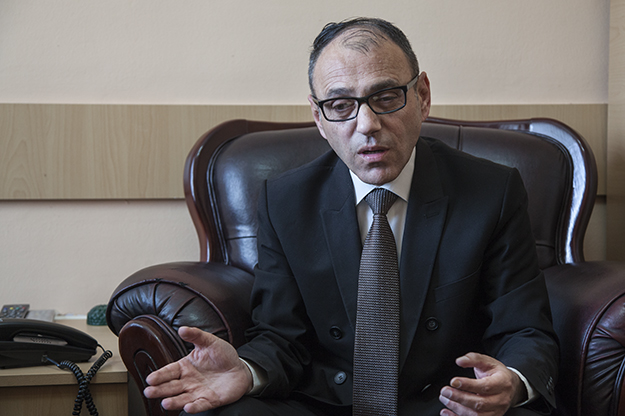 Head of the Kosovo Association of Blind People, Bujar Kadriu, says that it is impossible for blind people to live fully independent lives in Kosovo. Photo: Majlinda Hoxha / K2.0.

Kadriu says that despite Kosovo having introduced a regulatory framework years ago that foresees infrastructure that is equally accessible for all, in reality little has been done to ensure independent movement for citizens with disabilities. “There are ramps, foreseen according to standards, but most of them are implemented just as camouflage, for the inspectorate not to say anything,” he says.

The Law on Construction and the Administrative Instruction on Technical Conditions of Buildings for Access of People with Disabilities are both aimed at meeting the practical daily needs of people with disabilities, and are in accordance with international standards; new buildings must have accessibility mechanisms incorporated from the initial planning stages, while existing buildings should be adapted.

However Kadriu says that the framework simply hasn’t been implemented. “Some institutions don’t even have a clue that it exists,” he says.

A new report, published last autumn by disability rights NGO Handikos, backs up Kadriu’s claims, emphasizing that little has been achieved in terms of providing suitable infrastructure and equal movement for people with disabilities. Titled “Prishtina For All,” it analyzed the architecture obstacles in 195 public and private buildings and services in Prishtina, which are regularly frequented by the city’s citizens.

The report highlights the need for urgent intervention in order to eliminate obstacles, thereby securing the rights of people with disabilities to an independent and dignified life. It particularly showed that buildings and spaces are especially problematic for blind people, with none of the buildings having tactile surfaces.

Additionally, out of the locations analyzed, just 8 had areas for parking designed for people with disabilities, and just 15 locations had suitable toilets built according to accessible standards. Access ramps, essential for wheelchair users and parents with pushchairs, don’t exist at all in 38 percent of locations, while only 28 buildings had elevators considered to be accessible by virtue of being large enough to accommodate wheelchair users, having buttons with Braille and having voice activated controls.

Handikos director Afrim Maliqi has himself used a wheelchair for 30 years, after experiencing a serious disease on his spine when in his late teens. Although he feels glad that people today have a higher awareness of people with disabilities, he is disappointed by the government’s treatment.

“Before the war families would keep their relatives with disabilities indoors — we thought that with the end of the war things would change, that the state would take responsibility, but unfortunately the situation still continues,” Maliqi says. “If the infrastructure isn’t completely appropriate, it is a human rights violation. For instance a building has stairs but we cannot walk up and down stairs. What would people do if there weren’t stairs? Use ropes to go upstairs?” 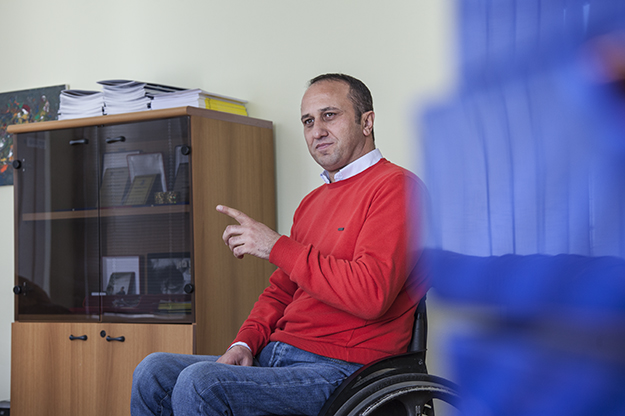 Afrim Maliqi, director of Handikos, says that the government has not done enough to support people with disabilities. Photo: Majlinda Hoxha / K2.0.

Whenever Maliqi has a meeting he must plan it in advance: He needs to find somebody to go with him, figure out if if the location has an appropriate parking space, ascertain what floor the meeting will be held on and check if there is a suitable toilet.

“It gives you a very bad feeling. You are simply not equal — you’re always dependent on somebody,” he says. “Not to mention the public toilets. If I go out for a coffee, I need somebody to be with me. And then I need to take care of how much I drink because I know I can’t be using the toilet.”

In 2013 Kosovo’s government launched a 10 year strategy (2013-2023) with the aim of creating a sustainable frame of actions to address challenges faced by people with disabilities. The strategy’s initial action plan, from 2013 to 2015, had five objectives including the creation of conditions for suitable physical access, information and communication.

“I always say that it is my dream to go out by myself during my lifetime.”

While a self-evaluation report, issued by the Ministry of Good Governance, suggested positive results had been achieved in the first two years of the strategy’s implementation, Kadriu asserts that the achievements have been exaggerated significantly. “According to governmental documents, a high level of implementation has been reached, but organizations for people with disabilities are very sceptical,” he says, referencing the results of the recent report published by Handikos. “In practice, the life of people with disabilities has essentially not changed in the way that was foreseen in the strategy and action plan.”

Over the years, such complaints have been borne out by the European Commission’s progress reports on Kosovo, which have emphasized limited strategy implementation, discrimination against people with disabilities and the issue of access to public buildings and public transport.

“I always say that it is my dream to go out by myself during my lifetime,” Maliqi says. “To wander alone around Prishtina, and if I see a clothes shop or technology shop, to enter it and look around. Or just to go out and have a coffee on my own. In Kosovo there isn’t a chance to do so.”K

Prishtina’s problems with accessibility and mobility for people with disabilities first gained momentum in the public discourse in 2013. University of Prishtina architecture students, led by their professor, Rozafa Basha, produced a Map of Barriers for Citizens with Disabilities, focussing on access to the capital’s public spaces.

Students were split into two teams, which also included representatives from seven different “circumstances of mobility”: electric wheelchair users, manual wheelchair users, blind people, visually impaired people, deaf people, and people with Down syndrome. They took two different routes from the bus station to the city center, charting the obstacles along the way.

The map highlighted major deficiencies, including a lack of tactile surfaces such as corrugated “warning strips” on sidewalks and at bus stops, a lack of braille in public elevators, and faultily designed wheelchair ramps.

Their work was presented to the public by the disability rights NGO HandiKos, on the International Day of People with Disabilities, following a march by disability rights activists through the center of Prishtina.