A Kosovar dog, operated on in Serbia - Kosovo 2.0
Blogbox | Activism

A Kosovar dog, operated on in Serbia

Helping animals in need is a sign of an empathetic society.

In April 2014, following a petition signed by 700,000 people in France against a law which considered pets to be property, like tables and chairs, the French parliament voted in favor of new legislation.

The new law defines animals as living and feeling beings, rather than moveable goods. The former French education minister and a signatory of the petition, Luc Ferry, argued that the law was necessary to protect animals against cruelty: “No one has ever tortured a clock [but] animals suffer, they have emotions and feelings.”

In most other countries animals are still considered property, although in more developed countries regulations have blurred this notion when it comes to the courts and people can still be convicted of cruelty to animals. In France though, just as in New Zealand and Canada, the law is now clear: One can go to jail for cruelty against animals, while for cruelty against a door, one can get hurt and look endlessly stupid.

Well, this is just an example to show that more developed societies have for a long time have known the value of pets — not only for guarding, hunting or pulling loads, but, in modern times, mostly for the sake of love and companionship.

There are numerous stories that are clear indicators of a compassionate sun finally rising for animals in Kosovo.

Meanwhile in Kosovo, over the last 15-20 years there is a raised awareness that pets, especially dogs, are living and feeling beings. I can testify to this from my own experience. Before the war it was common to see dog fights, and cruelty against them was regarded as “bad behavior” rather than a crime.

Nowadays, you can see people, mostly the young, being friendly, even to stray dogs. Although we have taken quite a fast sprint in this direction, there is nevertheless a long road of refinement ahead of us.

We still hear that municipalities are shooting stray dogs, even though it is illegal. There are regular dogfights happening, especially in villages around Kosovo — recordings of which often appear, albeit only for a short time, on Facebook or YouTube.

If the state is cruel towards animals, it would be hypocrisy to question or punish citizens for such behavior. But one should not dwell on the dark side of this story, the animal right infringement — there are numerous stories that are clear indicators of a compassionate sun finally rising for animals in Kosovo.

A story particularly unheard of in Kosovo happened some months ago when a concert was organized in Soma Book Station in order to fundraise treatment for an injured dog. Although a sad reality, raising money for people who need medical treatment abroad due to unavailability within Kosovo happens often; however such an action taken for an animal was a novelty.

Driada Matoshi, an actress and animal rights activist with People for Animal Rights Kosovo (PARK) — which organized the event — says that the whole thing came about after she found a small puppy all alone on the street two years ago.

“I took it and took care of her, because that is what activists do when they encounter an animal in need.” says Matoshi. “I sent her to the veterinarian and we cleaned the parasites, and she was a healthy dog, although malnourished.”

She named the dog Picrra, which is slang that roughly translates to “Tiny,” but she could not keep the puppy in her house because she already had two dogs. 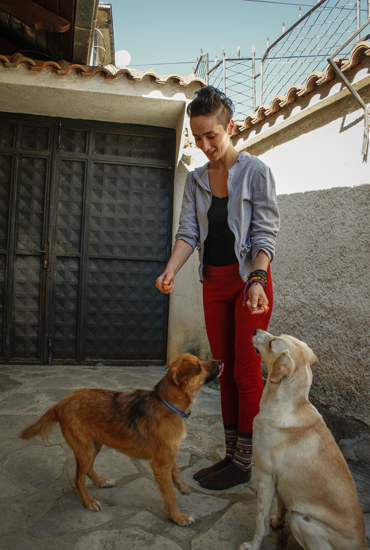 “In Prishtina there are three or four foster families who, for a fee of 30 euros per month — not including food and medication — take care of the dog. One such family took care for Picrra for a year,” says Matoshi. But that family, after exceeding the number of dogs that they were permitted to foster, had to send Picrra to a dog shelter in Gracanica.

Matoshi and other members of PARK visited Picrra as often as they could because they came to love her personality. “Picrra was never put in a box, she was our darling because she was endearing with her personality,” says Matoshi. “She was really friendly, very warm and grateful for everything people did for her, and capable of taking care of herself.”

Being such a lively dog, she had freedom in the dog shelter in Gracanica. She could get out and run around. Matoshi says that, knowing her personality, Picrra probably expanded her territory more and more; that territory most likely included a road.

“Nearly five months ago, they called me and told me that Picrra had been hit by a car and her leg was in a really bad condition,” Matoshi recalls. “I told them to bring her here, and when I saw her I was horrified. The leg was broken in three to four places, the tissue and veins were all damaged. It was really hopeless.”

Two veterinarians from Kosovo confirmed what she had feared: The leg must be amputated. But then, Svetlana Bjelogrlic, a friend and animal rights activist, suggested getting a second opinion in Belgrade.

“After we sent her to the veterinarian [in Belgrade], he immediately gave us hope by operating on her leg,” explains Matoshi. “Initially we thought that she was going to need two operations, but after some treatment, it was not necessary.”

After the operation, Picrra spent some time in the clinic and had therapy three times a day. Afterwards they brought her to Prishtina and decided to put her in Matoshi’s house temporarily until they could find a permanent family for her, possibly in the U.S. which is often considered one of the most pet friendly countries in the world.

“We want her to be adopted in America because we have a connection there. We have done this before, because Americans love dogs very much and take care of them,” says Matoshi, but she does not exclude locals, if they are good people and can take care of and love Picrra for the rest of her life.

Helping animals is just as noble as helping children.

Now Picrra is healthy, happy and recovering in Matoshi’s house. But still, the adventure of healing Picrra had a cost for the people involved. That’s why they organized a concert to collect funds to cover the bills.

With the help of Soma Book Station and other PARK activists, they set up what could be called an artistic gathering, which included pictures, music and local handmade products.

The musicians — Ilir Bajri, Fatjon Miftari, Enes Beu, Art Lokaj and Labinot Avdiu — made it a party, while pictures by Zake Prevlukaj, Lendia Zeqiri, Rron Qena, Roksi and Driton Gusia were for sale with fifty percent or more of the proceeds going to Picrra’s fund. Visitors could also buy bags with the inscription, “I helped Picrra,” and soaps made by women from Roma communities, and leave donations in donation boxes — all done for Picrra’s wellbeing.

Although the event helped with the payment of bills, Matoshi says that they still have some debts, but she is happy that at least Picrra is doing well, and has recently started to walk on all four legs again.

However events such as this are perceived by many to be too avant-garde. It’s a common justification (found mainly on Facebook statuses) that we have many other problems, and animal rights must therefore be postponed, as if tolerance and humanity are problems to be addressed in the future! Many would not understand this event, arguing that there are many people who are in need of medical treatment, and that people come before animals.

Although Kosovo is a poor country, we have proven time and time again that we can solidarize with our fellow humans — just remember the ’90s. So whoever holds a grudge towards helping a dog, it is wise to transform that grudge to a drive towards helping whomever they feel needs it, rather than being destructive. With a strong will, anyone can succeed.

Everyone should do their bit for the new state of Kosovo. Helping animals is just as noble as helping children. If we hope to ever join the great European family, we have to take care of and love those who are most defenseless.

For as Immanuel Kant once said: “He who is cruel to animals becomes hard also in his dealings with men. We can judge the heart of a man by his treatment of animals.”K