Assembly dissolved as motion of no confidence passes.

A motion of no confidence in the government has been passed in the Assembly, resulting in its dissolution. The motion, which needed a simple majority of 61 votes to pass, received 78 votes in favor with 34 against and 3 abstentions. New parliamentary elections are now set to take place within the next 45 days.

Although the government was largely formed of members from the two largest parties in the Assembly, the Democratic League of Kosovo (LDK) and the Democratic Party of Kosovo (PDK), whose representatives made up over half of the parliament, it could not survive the vote after Prime Minister Isa Mustafa’s LDK failed to gain enough support from its coalition partners in PDK.

The motion of no confidence was filed on May 4 by a coalition of opposition parties, who secured 42 signatures from Assembly members, including four deputies from PDK. The motion stated that “the government’s cabinet have created a deep public distrust, and a reflection that it is not functioning internally.”

Ahead of the Assembly vote, deputies took their opportunity to have their say on the government in a debate that lasted almost four hours.

In a last ditch effort to defend the government’s record before the Assembly vote, Mustafa claimed that the government had many achievements, including in economic development, the fight against extremism, drugs and human trafficking, and in securing membership of international sports and cultural organizations. “This is a political pamphlet, without any basis in facts,” he said of the motion. “This attitude is unacceptable and only serves as a political game. I assess that the motion represents destabilization of the country.” 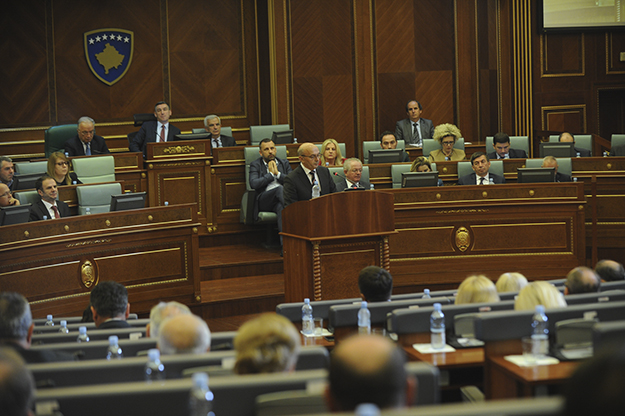 Head of the LDK parliamentary group, Ismet Beqiri, supported the prime minister, stating that his group assessed Mustafa’s government as the most successful since the war, and had achieved the best that it could in the circumstances. “We are all witness to the big obstacles in the work of government in the Assembly and outside of it and fortunately these have been overcome,” he said.

The head of coalition partner PDK’s parliamentary group, Zenun Pajaziti, however, disagreed with elements of Mustafa’s speech. “There has been development, and for it all the men and women of this country have worked,” he stated. “But today I will speak as a representative of the parliamentary group, an advocate of the motion we are facing, and the truth is that there has been stagnation in Kosovo.” Pajaziti cited hundreds of thousands of unemployed young people, stagnating in the country as a result of opposition protests, stalling the government’s work.

"This is one of the weakest governments that this country has experienced."

Konjufca went on to say that the government could not control control its Facebook account, let alone Kosovo’s borders and listed a number of scandals over the past few years. “A government of men and cousins that take tenders, a government that buys and sells the status of veterans, and that contributes to a special court, a government that cannot form its army,” he said. 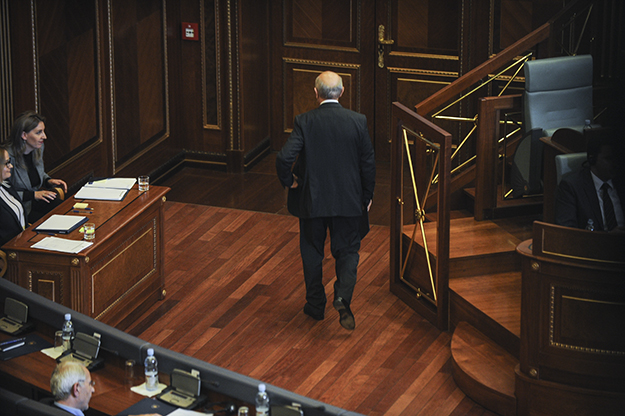 Ahead of the speech by head of Alliance for the Future of Kosovo’s (AAK) parliamentary group, Pal Lekaj, Mustafa left the Assembly hall, a point referenced by Lekaj at the start of his speech. “The prime minister couldn’t bear it and left his seat — hopefully he won’t come back,” he said, before criticizing the government for its record on health and employment and saying that the government had never made citizens’ well being its focus. “We tell him that this is one of the weakest governments that this country has experienced,” he said.

NISMA’s parliamentary group leader, Enver Hoti, described the motion as offering the potential for a new direction and for a government that would be capable of governing the country. While Danush Ademi, a deputy from the Ashkali Democratic Party, said he was voting for the motion as the government had not done enough to support his community.

“You did not support our project to help the Ashkali community,” Ademi said. “I’m not against any of the coalition parties in the government, neither PDK nor LDK, but I’m voting for the motion because we need a new government that represent all communities as equal. This government does not have the ability to represent my community’s interests.”

As the debate stretched on in advance of the vote, other deputies from across the Assembly floor lined up to effectively launch their own election campaigns, while LDK and PDK deputies blamed each other for the coalition’s failings.

Today’s vote comes two days after an attempt to ratify the controversial agreement on border demarcation with Montenegro, over which a fierce 18-month long battle between the coalition partners and the opposition has been waged. More recently, the issue has also caused ruptures within the coalition.

The border demarcation deal was scheduled for a vote in the Assembly on Monday (May 8) this week but was postponed until after the the motion of no confidence had been settled. It was reported that Mustafa could not convince “rebellious” deputies from his own party to vote in favor of the agreement, and that coalition partner PDK had shown signs of impatience with his inability to do so. 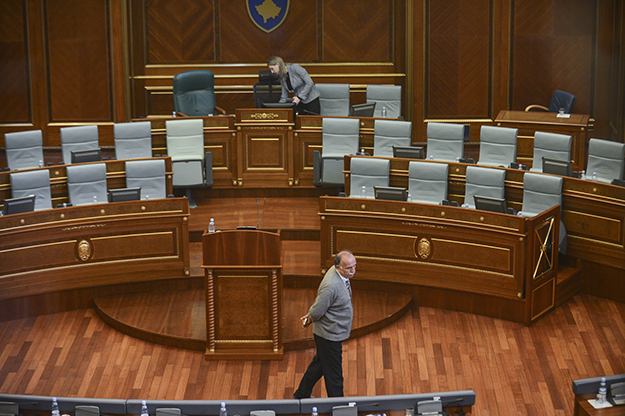 Mustafa called a closed “mandatory” meeting for all LDK deputies on Tuesday (May 9), with U.S. Ambassador Greg Delawie also in attendance. Members of the opposition labelled his presence as external pressure being applied on Kosovo’s lawmakers, with AAK’s parliamentary chief Pal Lekaj stating that although he respects American engagement in Kosovo, “no [outside] pressure is democratic.”

Mustafa, and other prominent members of his party, have often stated that the ratification of the agreement would bring an end to the visa regime with the EU, which keeps Kosovars as the only citizens in the Western Balkans unable to move freely in the Schengen Zone. After Monday’s postponement, the Minister for Labour and Social Welfare, Arban Abrashi, stated that if the deal passed, Kosovars would be granted visa liberalization within 90 days.

This statement was contradicted hours later, by the head of the EU’s office in Kosovo, Nataliya Apostolova, who stated that there are no guarantees that visa liberalisation would happen, even if the demarcation deal was passed. When the European Commission recommended visa free travel for Kosovars within the Schengen Zone, two conditions were imposed: The ratification of the demarcation deal and improving the country’s track record on corruption.

The issues surrounding both visa liberalization and the demarcation deal seem set to feature heavily during the upcoming election campaign, as both PDK, LDK, and the opposition parties aim to improve their standing within the Assembly, and form the next government of Kosovo.K