Historic event themed “Why laws are not enough.”

Kosovo is hosting the first annual regional conference of its kind on LGBTI rights. Organized by the government of Kosovo and the LGBTI Equal Rights Association for Western Balkans and Turkey (ERA), the conference kicked off last night inside the government building in front of government representatives, ambassadors, EU representatives and LGBTI community members and activists.

Themed “Why laws are not enough!” the three-day conference (October 6 – 8) aims to increase the debate on the lack of social inclusion and equality for LGBTI people in the Western Balkans and Turkey.

This event brought together more than 120 representatives of LGBTI and human rights organizations as well as governmental representatives from the Western Balkans and Turkey. Organizers hope it will become a space for developing discussions and ideas about overcoming challenges and obstacles in order to empower the LGBTI movement in the region.

Despite years of hard work by LGBTI organizations and amendments to the legal framework, the effect of improved legislation has yet to be felt by the LGBTI population. Problems are visible in all areas concerning implementation including protection from violence and discrimination, bullying and harassment, increased hate speech in the media and on social networks, poor or inadequate access to health services and a lack of legislation recognizing the rights of trans and intersex people.

Through various discussions and workshops, the conference aims to initiate a regional platform as a way for national authorities to exchange best practice, and increase the visibility of the LGBTI movements in the region. 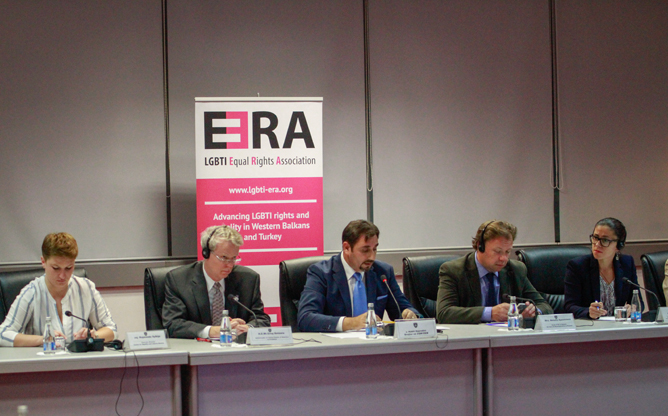 Habit Hajredeni, head of Good Governance Office within the Prime Minister’s Office officially declared the conference open. As the only government representative on the panel, he said that the conference will discuss important issues related to legislation and why laws are not sufficient in the aim of achieving social inclusion and equality for the LGBTI community in the Western Balkans and Turkey.

“It is not a coincidence that the conference is being held in Kosovo,” said Hajredini, pointing out the progressive Kosovar legislation framework that has adopted a package of human rights and anti-discrimination laws. “These laws guarantee the rights of the LGBTI community, not only related to discrimination, but also other issues that involve [LGBTI] protection in general.”

Talking about legislation and its implementation, Hajredini said that the focus of the conference will be identifying mechanisms that would reduce the gap between institutions and the LGBTI community. He pointed out different mechanisms taken by the government of Kosovo, such as the creation of advisory inter-ministry and coordinating groups for LGBTI rights that include the participation of civil society, the LGBTI community, Kosovo Police and the judiciary.

“Very soon we are expecting to create a two-year plan that will be specifically dedicated to the LGBTI community where education, social well-being, health and collaboration with civil society will be the main focus,” he said.

Hajredini added that together with civil society the government intends to create special policies to address LGBTI issues, starting by raising awareness with a widespread national campaign.

He concluded that there are still many challenges remaining despite all of the steps taken by the government and “it requires the engagement of institutions and of the whole of Kosovar society.”

Greg Delawie, the U.S. ambassador to Kosovo, opened his speech by highlighting the support of Kosovar political leaders toward the LGBTI community, such as President Hashim Thaci’s participation in public LGBTI events.

“We are also pleased that for several years now we have seen in Kosovo public celebrations of the International Day Against Homophobia, Transphobia and Biphobia,” he said.

Delawie noted that there has been little progress in the judiciary regarding LGBTI rights; as an exception he noted that on September 26, the Basic Court of Ferizaj convicted two men involved in an attack on two LGBTI community members earlier this year. “Hopefully this successful prosecution will help send a message that attacks based upon hate will never be tolerated,” he said.

Still, the ambassador pointed out that human rights reports show how LGBTI persons continue to face discriminatory practices in education, employment, housing and medical care. He expressed his hope that the action plan that is expected to be launched by the government will help Kosovo Police and the State Prosecutor to work sensitively on hate crimes, aid health care workers to understand the community’s needs and encourage educators to adopt curricula that respect LGBTI persons, “so Kosovo’s lesbian, bisexual, transgenfer and interesex students feel welcomed in their classrooms.”

“It is our moral obligation towards a fair and tolerant society … greater protection of human rights means greater stability, which promotes prosperity, tolerance and inclusivity,” he said. “This is not an easy process for any society including mine, but in this process we learnt that to succeed the government and the people must work together.”

As the third speaker at the conference’s official opening, Thomas Gnochi from the EU Office in Kosovo, highlighted measures taken by Kosovo’s government to improve legislation on human rights in general and LGBTI rights specifically.

“We all need to work together for a better and tolerant environment where differences and sexual orientation are not reasons for fear.”

But commenting on the conference theme, “Why laws aren’t enough!” he referred to a 2015 survey conducted in the Western Balkans, according to which 81 percent of the LGBTI community said that they were exposed to psychological abuse, cruel jokes, insulting comments and threats of physical violence.

“This is something that has to be changed,” said Gnochi. “We all need to work together for a better and tolerant environment where differences and sexual orientation are not reasons for fear.”

Gnocchi argued that although the LGBTI community in Kosovo has been visible and outspoken as never before, the number of hate crimes motivated by homophobia is still a huge concern. “Our office follows these cases very closely … we are satisfied to learn that a judgment of one of these cases for the first time treats these crimes as what they are — as hate crimes,” said Gnocchi, adding that more needs to be done by Kosovar society leaders to help the application of legislation and antidiscrimination.

Rajmonda Sylbije, executive director of the Center for Equality and Liberty (CEL) discussed many challenges and difficulties that are prevalent among LGBTI communities in the Western Balkans and Turkey and the failure of governments to completely address them.

“As a host I am feeling happy, but also I have mixed feelings since just the need to organize conferences like this shows that our governments still aren’t dedicated as much as is needed, not just in Kosovo, but in the whole region,” said Sylbije.

She expressed her hope for LGBTI movements and debate to continue in the region as LGBTI members continue to be excluded. “Rights are not enough,” she said. “And the whole LGBTI community knows what that means.” 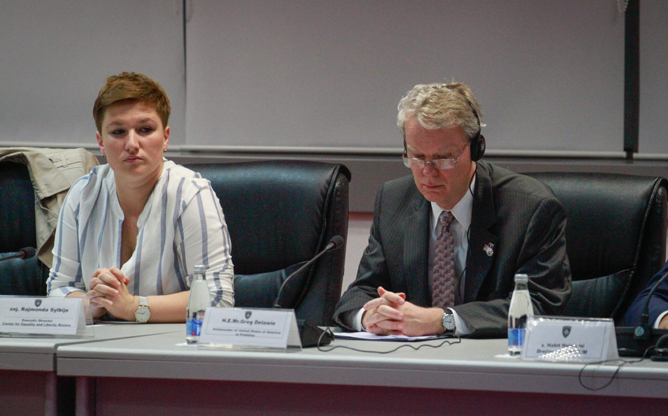 Rajmonda Sylbije told the conference that she had mixed feelings about it because the need to hold such conferences showed that much more still needs to be done for LGBTI rights in the region. Photo: Fikret Ahmeti / K2.0

She argued that LGBTI issues go beyond this region and that challenges also persist in Western countries but “at least the rights have reached the right level of respect.”

“I hope that this three-day conference will help to add as many European aspects that will help us to have a better and a more efficient approach in fighting for LGBTI rights in Kosovo.”

The next panel speaker was Agim Margilaj, another Kosovar activist on LGBTI rights and program manager of the Center for Social Group Development (CSGD).

“This event where the governing, public institutions and civil society in the region are bound together to discuss LGBTI issues brings a good opportunity to better know each other and share our experiences focused on challenges, success stories and possible common barriers that each of us in respective countries might face regarding exercising LGBTI rights,” said Margilaj.

He pointed out that all the positive legislation changes made during the last decade are a result of the work of LGBTI NGOs. Margilaj also agreed that countries in the region aren’t ready to show commitment in implementing the laws that protect human rights and the LGBTI community. “[That] would guarantee that people could live freely regarding gender identity and sexual orientation,” he said.

He raised concern that years after laws have been approved, 17 discrimination and assault cases have been reported to the police since 2013. Commenting on the recent Ferizaj case that was brought to a final conclusion in the courts, Margilaj said: “For some of you this might be disappointing but it gives us hope.” 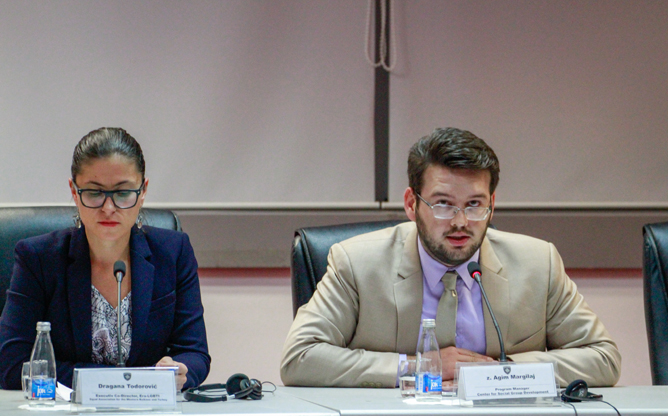 Agim Margilaj told the conference that a recent conviction of two people for an attack on LGBTI persons in Ferizaj gave the LGBTI community hope that such issues were beginning to be taken seriously. Photo: Fikret Ahmeti / K2.0

The panel discussion concluded with Dragana Todorovic, executive co-director of ERA. She thanked the government of Kosovo for their cooperation during many months of intensive conference preparation.

“Having a meaningful dialogue with state authorities is extremely important for LGBTI movements in the Western Balkans and Turkey and it is important that this dialogue goes further than just words and promises,” she said. “It needs to move into actions, concrete actions.”

Todorovic went on to mention the gap between legislation and the realities faced by LGBTI people, which she said was reflected best in research data: More than 30 percent of the LGBTI community in the Western Balkans and Turkey have been victims of physical violence; more than 50 percent of LGBTI persons have witnessed discrimination; 20 percent of the general population in these regions thinks that LGBTI persons are not better than criminals and should be punished accordingly; more than 60 percent of the regional general population thinks that homosexualty is a disease, despite many years of efforts to promote LGBTI rights.

“These numbers illustrate the difficult circumstances in which we as LGBTI people live — in fear, anxiety, insecurity,” said Todorovic. “This is why laws are not enough, as the title of our conference states.”

“We believe our message is stronger when our voices are united."

She argued that the LGBTI community needs to further increase its visibility and movement, but for that a safe environment is required in order to be open about sexual orientation or gender identity.

“Do you know that only one in 10 people know someone who is LGBTI … and data shows that it is precisely those people, the one in 10, that have the most favorable opinion about LGBTI issues,” said Todorovic. “This is why we need to further increase our visibility by creating an environment of people getting to know us as we are.”

She said that over 40 LGBTI organizations from the region had now decided to join forces for a better future for the LGBTI community as members of ERA, including some from Croatia and representatives from Slovenia who signed up yesterday.

“We believe our message is stronger when our voices are united and we are honored to have all of you as our supporters in our common struggle to make this region a better place for all, regardless of sexual orientation, gender identity and sexual characteristics,” she concluded.

Speaking after the discussion, Igballe Rogova, executive director of Kosova Women’s Network told K2.0 that the Kosovo government’s involvement in organizing the conference makes it an historic event and indicates that LGBTI visibility should be seen from a more positive perspective.

“The issue is that this today was pessimistic talk,” she said. “Instead of saying that this event is historic, the first in the region, and offering praise that we are now in a different situation to that which we were in before — considering that people were persecuted on the streets and in institutions — now we have people from the institutions that take this issue forward. That is why this is an historic event.”K