Today (Sept. 7), the new members of Kosovo’s Assembly, elected nearly three months ago in June, have chosen PDK’s leader Kadri Veseli as the new president of the Assembly, following an odyssey of disagreements. The session, which was due to start at 11:00 but was delayed until 14:00, saw Veseli elected with 62 votes in favour.

Veseli’s election was only made possible after an agreement reached between the PAN coalition (made up of the Democratic Party of Kosovo (PDK), the Alliance for the Future of Kosovo (AAK) and the Initiative for Kosovo (Nisma)) and Behgjet Pacolli’s New Kosovo Alliance party (AKR), who reneged on a pre-election coalition they had made with the Democratic League of Kosovo (LDK).

The agreement meant that PAN’s 39 deputies, alongside the 20 deputies representing minority communities in Kosovo were joined by three AKR deputies, pushing the vote over the 60 required to elect Veseli. AKR’s fourth elected deputy, Korab Sejdiu, resigned from the party in the wake of the deal with PAN, and voted against the motion of Veseli becoming Assembly President. 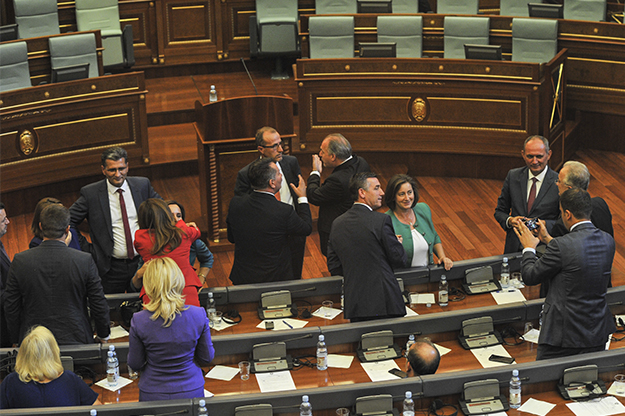 In Veseli’s first speech of his new mandate, he called for the government and the opposition to be unified on fives issues, claiming that consensus was both possible and necessary. The five issues he cited were: economic development and increasing employment, health and education issues, working on visa liberalization criteria, the process of dealing with the past and the dialogue with Serbia, and the establishment of the army.

Sadly, many of the deputies missed Veseli’s speech, with all of Vetevendosje, LDK and Alternativa’s deputies being absent from the room. All three parties’ deputies left their seats when Veseli took his, showing a unity amongst the opposition, and another potentially difficult mandate for Veseli as president of the Assembly.

The agreement between AKR and PAN was made on Monday (Sept. 4) at a late night meeting at Pacolli’s residence*. In return for support for Veseli, the agreement guarantees members of AKR power over four ministries in the newly formed government, despite now only having three deputies in the Assembly. 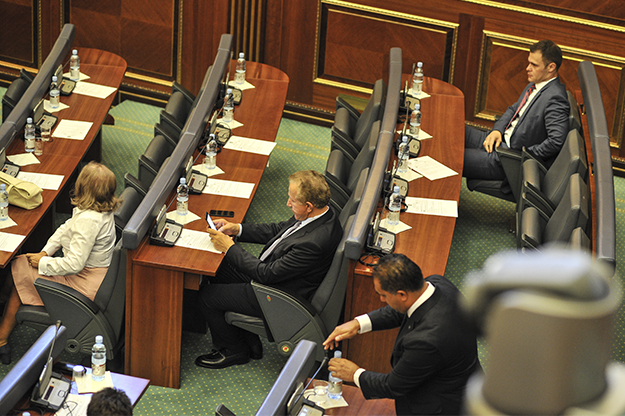 Behgjet Pacolli has negotiated a strong deal for his party AKR, but has lost a deputy in the process, with Korab Sejdiu quitting the party. Photo: Athde Mulla / K2.0.

The meeting was held behind closed doors, with Kosovo’s media largely excluded. According to the one online media outlet that was invited to report on proceedings, Pacolli’s party will select the new ministers at the Ministry of Foreign Affairs, the Ministry of Internal Affairs, the Ministry of Spatial Planning, and the Ministry of Economic Development. AKR will also select seven deputy ministers, while the agreement also specifies that AKR will nominate a candidate for the post of president in this upcoming mandate, with the expectation that it will be Pacolli.

In return for their support for PAN, Lista Srpska are expected to lead three other ministries: the Ministry of Agriculture, Ministry of Local Administration and Ministry of Communities and Returns.

The session held today was the sixth attempt at electing a president for the Assembly since August 3, when the inauguration session was set after the final results of the general election were certified.

PAN, the winning coalition at the election, had previously failed to nominate their candidate for the president of the Assembly due to a lack of votes in the Assembly, as well as strong resistance to Veseli becoming Assembly president from the opposition. On Aug. 24, three weeks after the inaugural session opened on August 3, vice-president of PDK, Enver Hoxhaj said that PAN needed a further two weeks to secure the required votes.

Alongside Veseli, five deputy presidents of the Assembly were elected; Xhavit Haliti from PDK, Aida Derguti from Vetevendosje, Kujtim Shala from LDK, Mufera Shinik from the coalition of non-majority minorities and Slavko Simic from Lista Srpska. The three Albanian deputies were elected unanimously, while Vetevendosje and some LDK deputies abstained on the vote for Shinik and Simic because of the presence of the Lista Srpska deputy.

With Veseli and his deputies now in place, the session for establishing the new government is expected to be held on Saturday (Sept. 9), with Ramush Haradinaj almost certain to be made Prime Minister, and other ministries being divided between PDK, AAK, Nisma, Lista Srpska and their new partners in AKR.K

*Editor’s note: A correction has been made to this article, which initially stated that the meeting between AKR and PAN took place at Pacolli’s Swiss Diamond Hotel.