Those jailed during a time when thinking differently was illegal still bear the scars of their detention.

“I was able to peel back my skin from my feet until my hair, like taking off clothes,” says 48-year-old Besim Zymberi, recalling the massive burns he sustained from four electric shock treatments. “From the very same torture, three prisoners out of 11 who were arrested on the same charges died. I never thought I would survive.”

Zymberi was arrested in June 1998 and spent 43 months as a political prisoner in Serbian jails. According to the 2015 findings of a government commission set up to verify the status of former political prisoners, he was one of 6,774 men and women who are confirmed to have been politically detained during the 1990s. Many of those arrested were engaged in direct political activity as Kosovar Albanians organized against an increasingly repressive Serbian regime. But others were persecuted for the slightest of reasons and with the scarcest of evidence.

Although he says he was a political activist with Ibrahim Rugova’s Democratic League of Kosovo (LDK) party, and that he occasionally spoke out against their pacifism, Zymberi has always strongly denied that his activities amounted to a crime. The now thickset and clean-shaven man from Ferizaj stood accused of violating three articles of the Yugoslav Criminal Code: Article 136, “Associating for the purpose of hostile activities (against the people and the state)” and Article 125, “Terrorism” in conjunction with Article 139, “Punishment for the most severe criminal offences.”

Zymberi’s is a common story. During the decade, any notion of regular law and order disappeared entirely and Kosovo was firmly consolidated as a police state, ruled by fear and intimidation. By 1993, Human Rights Watch had already noted that Serbian authorities were pursuing a “program of forced displacement, harassment, arrest, interrogation and torture” and that forced confessions were often the sole basis of convictions by a judiciary robbed of all independence. 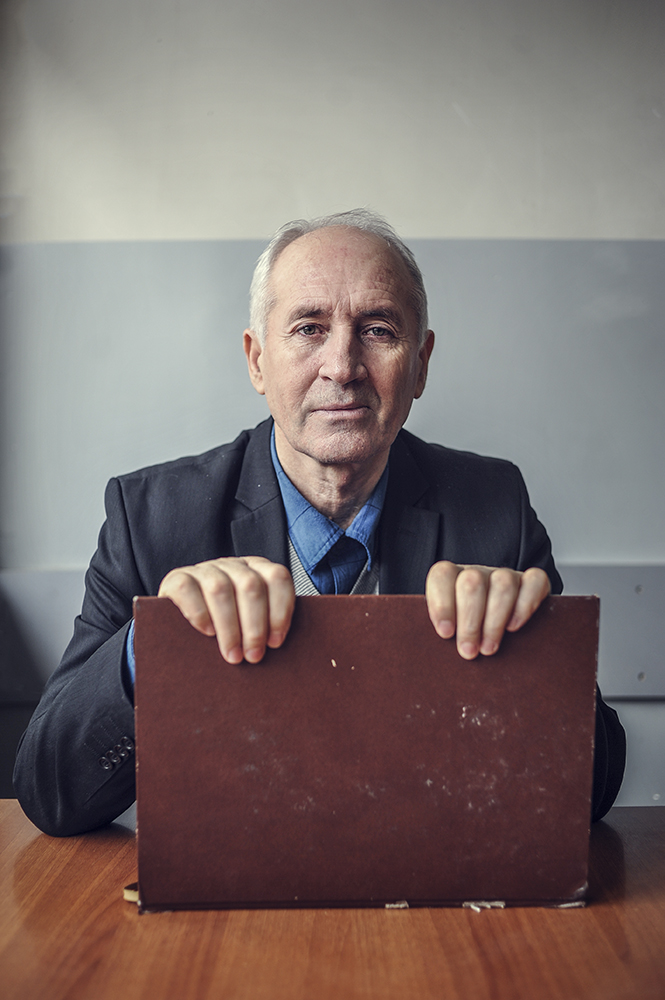 Avdullah Hoxha, a teacher of Albanian language and literature, spent 21 months as a political prisoner in serbian jails between 1999 and 2001. Photo: Atdhe Mulla / K2.0.

For Kosovar Albanians, the police had already become synonymous with the increasingly oppressive Serbian regime, while for the authorities, simply being Albanian was seen as a threat to their own security and to that of the state. A vicious circle emerged of attacks on police by small groups of Kosovar Albanians, followed by police crackdowns on the Kosovar Albanian population as a whole; in turn, this led Albanians to resent the police and the regime with ever more ferocity. As British journalist Tim Judah points out, the police often accurately identified those who were genuinely hostile toward them — Adem Jashari, who would later become the Kosovo Liberation Army’s (KLA) most famous martyr, was convicted for terrorism in absentia in 1997. But they also targeted Kosovar Albanians indiscriminately and often for simply being Albanian.

When the KLA stepped up its actions in 1998, arrests intensified in an attempt by the authorities to prevent the growth of the rapidly expanding militia. ”The regime used article 136 [of the Yugoslav Penal Code] to collect all those who were considered a threat to the state,” recalls 58-year-old Avdullah Hoxha. “Anyone who was considered a potential threat would be arrested — primarily professors and engineers were a target of the regime.”

Hoxha, a teacher of Albanian language and literature at the Xhevdet Doda high school in Prishtina, was himself arrested on suspicion of hostile activities against the state on June 2, 1999; he was sentenced to three years in prison, after he confessed during two weeks of torture. Hoxha believes that he was targeted simply due to his education. “I lived in the town of Gracanica and the police were arresting all Albanian intellectuals,” he says. “But we had a duty to keep the nation educated, even in such extraordinary circumstances.”

By this time, NATO was dropping its bombs, and Serbian forces were using any means of threat and intimidation at their disposal in a frenzied campaign of revenge. Paramilitary units consisting of Serb ultra-nationalists and criminals terrorized rural areas, arresting, murdering, raping and burning whole villages to the ground. 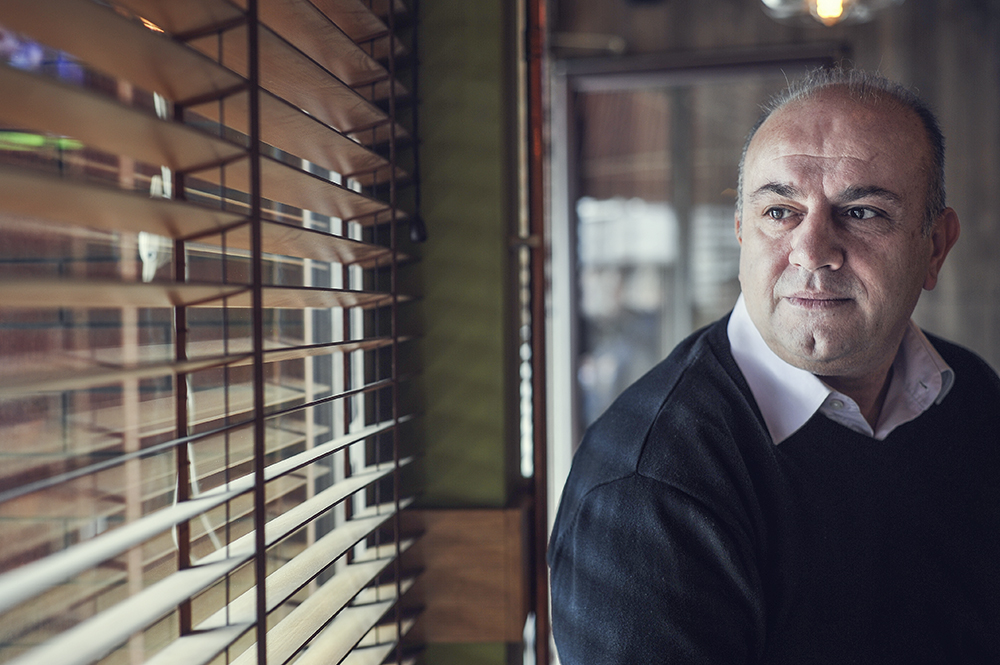 As a political prisoner, Besim Zymberi survived malnutrition and torture, as well as the massacre of between 90 and 130 inmates at the Dubrava prison. In total he spent 43 months in serbian prisons. Photo: Atdhe Mulla / K2.0.

Within Kosovo’s prisons, the mistreatment intensified. Zymberi, who by this time had been transferred to the Dubrava prison in northwest Kosovo, says that during this period he was forced to live off just two small pieces of bread per day, with only water to drink. “I came to minimum weight, and I could count the bones [in my body],” he recalls, adding that he went from weighing 95 kilograms at the time he was arrested to no more than 50 kilograms when in Dubrava.

“The torture was on a daily basis and very brutal,” says Zymberi. He particularly remembers May 13, which he says was celebrated in former Yugoslavia as the day of police. “They were hitting us with different objects one by one,” he recalls. “The torture would continue until we fainted, and was repeated many times. They even invited Serb civilians to beat us, [as well as] soldiers and other police forces from outside of the prison.”

It was in this context of chaos and panic that two notorious incidents occurred at the Dubrava facility. On May 16, one of Kosovo’s most prominent political prisoners, Ukshin Hoti, was released from the Dubrava prison having served a five-year sentence for “endangering the constitutional order.” Since 1981, the politics and philosophy professor at the University of Prishtina had been arrested several times by the Yugoslav authorities for his political activism; his final arrest by Serbian police in 1994 came as a result of his public advocacy for a unified state for Albanians. However, upon his release in May 1999, he immediately vanished. While his disappearance has been the subject of much speculation in the past 17 years, very little is known about it; to date, Hoti remains one of more than 1,650 people who are officially still declared missing from the war.

The second incident happened just six days later and will forever be engrained in Zymberi’s mind. On May 19 and May 21, two NATO bombing raids targeting Serbian forces had hit the prison facility, killing about 20 prisoners and guards. Early in the morning of May 22, an order was issued from a megaphone in the prison’s watchtower for the prisoners to queue up in the facility’s courtyard; some refused and hid inside the prison, but approximately 800 obeyed. “Without any warning they started to fire on us with different weapons; automatics, hand grenades, even mortars,” recalls Zymberi. “The number of people killed was huge.”

But the terror wasn’t over. “In the afternoon, masked forces entered inside to finally execute us,” he says. “Many of the hostages were hiding in manholes, which were of different sizes. From the building where I was, with my own eyes I saw Serbian soldiers and guards, opening the manholes and throwing hand grenades inside.” The murderous rampage continued the following morning — in total it is estimated that between 90 and 130 prisoners were killed in the Dubrava massacre, including two who hung themselves in the night; approximately 200 prisoners were wounded.

The survivors of the massacre, including Zymberi, were transferred to another prison at Lipljan where their maltreatment continued. “Five prisoners were only provided with three liters of water [between them] per day,” he recalls.

On June 10, the bombing stopped after the signing of an agreement between Serbia and NATO that signalled the end of the war. However, the ordeal of those still held in Kosovo’s prisons was far from over. Before NATO ground forces entered Kosovo three days later, about 2,000 prisoners — both political and those accused of other crimes — were transferred to prisons in Serbia proper; among them were Zymberi and Hoxha. “Despite the fact that my life was taking an unknown direction, I was content having seen that the convoy of Serbian military was leaving the territory of Kosovo,” recalls Hoxha, his eyes welling up. “That was the most important thing that happened in my life, a moment when I stopped thinking of my own fate.”

Looking for loved ones

The uncertainty continued amid international pressure and regular protests by activists and families of prisoners in Prishtina, many of whom had no idea where their loved ones were being held, or even if they were still alive. After some weeks, humanitarian organizations such as the Red Cross gained access to the prisons and were able to establish imperfect lists of those within them; they included a number of detainees who have become prominent political figures in Kosovo such as MPs Albin Kurti, Nait Hasani and Flora Brovina.

Humanitarian intervention even enabled families to send essential provisions. “The food packages sent by my family helped a lot,” recalls Zymberi. But families didn’t only send food. In a desperate attempt to secure the release of their loved ones, some borrowed huge sums of money in order to pay for the release of their loved ones through informal channels — a U.S. Congress resolution from the time suggests that the cost to obtain freedom for a single prisoner ranged from US$4,300 to $24,000.

Amid ongoing protests by anguished family members, international pressure on Serbia to release political prisoners from Kosovo ramped up. This effort started bearing fruit after Vojislav Kostunica defeated Slobodan Milosevic in presidential elections in late 2000. In February 2001, Kostunica signed an amnesty for all prisoners held under article 136 of the Yugoslav Penal Code. About 22 months after he had been arrested, Hoxha was finally released on March 10, 2001. “On the very same day, 100 prisoners were released,” he recalls. “All were political prisoners.”

But the amnesty didn’t apply to all of those detained, and hundreds remained interned. Having been held under charges of terrorism and committing the most severe criminal offences, Zymberi had to wait another 10 months for his release, which eventually came in January 2002. As to his imprisonment, he says that he never stood trial for the allegations made against him, while all papers connected to his internment — along with those of hundreds of fellow inmates — were destroyed at Dubrava. “We were more like hostages,” he says.

Two months after Zymberi’s release, the last of Kosovo’s political prisoners were freed after a deal brokered between Serbia and the U.N. Those who eventually walked free will always bear the physical and mental scars from a dark period when so much as thinking differently was a crime. But for the families of hundreds of Kosovo’s political prisoners who are missing or were killed, the torture continues.K