Workers forced to accept rights violations due to job insecurity.

His task is to ensure security and order at the entrance of the Gynecological Clinic in the University Clinical Center of Kosovo (QKUK) where he has been working for the last three years as a security guard. But, F.N., an employee of the private security company Rojet e Nderit says that he himself does not feel safe in his job.

On May 25, he was attacked with metal bars because he did not allow a party to enter the clinic outside of visiting hours; he received blows to the head, resulting in injuries that required five stitches.

Despite being legally entitled to 21 days of paid leave to rest and recover, F.N. took just four. “I have three daughters,” says the electrician, who could not find a job in his own profession, by way of explanation. He does not even mention the possibility of receiving compensation for the injuries he sustained at work, until asked.

“Who am I to seek compensation for damages?” he says. “We receive salaries regularly and that is good.” This fact seems to be sufficient for him.

F.N. is only one of dozens of workers who suffer injuries in the workplace each year in Kosovo, but according to Jusuf Azemi, head of Kosovo’s Independent Trade Union of the Private Sector, most are satisfied if they can simply retain their jobs; seeking one’s rights in a private company in Kosovo, he says, effectively results in terminating one’s own contract.

“There have been cases when employees were not paid for three months by their company, and when they demanded their salaries, they were not paid but instead were told not to come to work from that moment on,” says Azemi. He lists the high level of unemployment — officially at 30 percent — an unfavorable labor market, and corruption and nepotism in state institutions as reasons behind what he calls the “privatization” of workers rights. The result, he insists, is poverty. 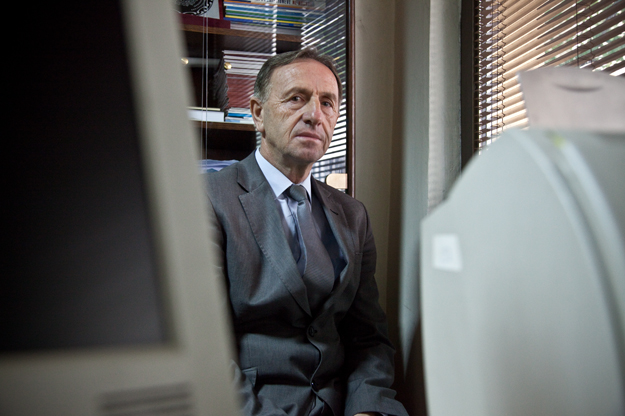 F.N. insists he has no complaints with his employer; on the contrary he is satisfied that he has a job, although he says he would prefer a job related to his own profession. Representatives of Rojet e Nderit told K2.0 that they had offered medical treatment and paid leave following the attack. “As regards other expenses, we are reviewing the case also with Kosovo Police so that we can offer the proper compensation for the damages of our employee and our company as well,” stated a written response from Rojet e Nderit.

Nonetheless, according to the union official, private security companies are the second highest violators of workers’ rights in Kosovo, behind only the construction sector where violations and risks are evident on a daily basis. Azemi recalls an incident last year when F.N.’s employers fired 60 employees in one instance without providing any clear reason for doing so; it took an intervention from his union before they could return to work.

Workers’ rights in Kosovo — as set out in the Law on Labour, the General Collective Agreement and the Law on Safety and Health at Work — are technically well-regulated, although the 2015 European Commission Progress Report notes that the Law on Labour still needs aligning with EU legislation and that implementation of the current law is “unsatisfactory.” Based on the statistics of the Independent Trade Union of the Private Sector, 90 percent of these laws are not implemented in reality.

The Progress Report also states that more needs to be done to enforce health and safety legislation to help prevent injuries and accidents at work. In 2014 there were 64 cases of accidents and injuries at work, including nine fatalities; in the first half of 2015, there were 26 accidents including five deaths. Figures for both years are suspected to be on the low side due to under-reporting of incidents.

Referring to these cases and the little progress made in addressing them, Azemi charges the Labour Inspectorate with corruption and nepotism. But he also blames the Minister of Labour and Social Welfare Arban Abrashi directly for not reacting to these cases. Between January and September 2016, Azemi says he wrote four or five times to Abrashi to inform him that there is no progress in the private sector with regards to employees’ rights.

“There are cases workers tell of where their employers are caught off-guard by inspectors who are still doing an honest job, and they are forced to hide in places that even a rabbit wouldn’t fit into.”

Azemi also says that during a formal meeting with Isa Mustafa in January 2016, he even informed the Prime Minister of incidents where inspectors had collaborated with private companies in order to cover up violations. Part of this meeting, he emphasizes, was the current president, Hashim Thaci (who at that time was deputy prime minister), and Abrashi; Azemi insists that all public institutions are therefore aware about the extensive employment rights violations in the private sector.

“If someone would have heard about the cases of which I am familiar with, they would think that I’m crazy,” he says as he begins to describe the violations that he says members of his union face on a daily basis in private companies. “There are cases workers tell of where their employers are caught off-guard by inspectors who are still doing an honest job, and they are forced to hide in places that even a rabbit wouldn’t fit into.”

The most problematic sector in the private sector remains the construction sector. Azemi says his union have identified more than 100,000 workers who have no contract; the official number that was provided by the Labour Inspectorate at a press conference in March is nearer 1,800.

Violation of workers rights in Kosovo continue to be most common in the construction industry, followed by private security companies. Photo: Fikret Ahmeti / K2.0.

This number is described as “absurd” by Azemi. “We have invited them publicly to accompany us everyday to companies and see for themselves what the number of workers without contracts is,” he says. “On the other hand, there are companies who for 8 years now have not paid the workers’ pension contributions.”

Azemi adds that the union has even engaged a lawyer for these cases, although there has been a lot of procrastination in solving them and they are always fighting against alleged corruption and nepotism. “There have been cases when inspectors have fined private companies for violations of various natures, but the sentences have been repealed at the center because someone has an uncle there,” he says.

The entire control over the private labor sector, he says, is centralized since regulations state that no inspector is allowed to carry out inspections without a prior permit issued by the Labour Inspectorate. This, says Azemi, is the way private companies and certain persons at the Inspectorate have been allowed to collaborate and hide violations.

To emphasize the scale of the task they are up against, Azemi points out that the union, which dates back to 1990, is not even recognized as an institution by the state.

On addressing cases of violations committed by private companies, Azemi apportions some of the blame to the media, an industry which has also been proven to violate workers’ rights. “There have been cases where stories [on rights abuses] have been censored,” says Azemi without going into detail about which media outlets were involved.

But he also mentions that there is a general fear of reporting on cases of workers’ rights violations, given that such offences are also committed by the media themselves.

None of Azemi’s assertions are challenged by Shkelqim Hysenaj, head of the Association of Journalists of Kosova (AGPK). Hysenaj states that the lack of work contracts and the failure of media organizations to fulfill contracts are the first problems with which many journalists are confronted.

“The Labour Inspectorate is not committed seriously to solving this problem and helping us to create better conditions for work."

“The Labour Inspectorate is not committed seriously to solving this problem and helping us to create better conditions for work. As an organization, for a long time now we have demanded an inspection of the media, which took place, but we are not fully satisfied with the results,” says Hysenaj, who reveals that he has not received a detailed report of the Inspectorate’s findings, despite requests.

There are also suggestions that more could be done by media organizations themselves to improve their working practices. During a panel discussion at the launch of the media freedoms report on World Press Freedoms Day, law consultant Furtuna Sheremeti commended the media for being one of the few instances in Kosovo where there is internal regulation within an industry, but emphasized that media organizations have a responsibility to regulate their own environments.

Violations of workers’ rights continue right across the labor market however, with the private sector being the primary offender.

Jeton Mehmeti from good governance think tank GAP Institute says that causes of violations are varied. In some instances they stem from a lack of knowledge of legal rights by workers themselves, he says, while in others employers intentionally overlook legal provisions. He also points to a lack of special courts for labor disputes. “Nevertheless, the main responsibility for the lack of proper implementation of the Law on Labour falls on the Labour Inspectorate,” he said.

K2.0 contacted the Ministry of Labour and Social Welfare — the institution vested legally and constitutionally to address problems related to the labor sector — to ask for an official reaction to the issues raised. However it failed to respond.K