“Marx was good for Engels, not Angels,” said Catholic Priest Dr. Don Lush Gjergi during a recent interview. At least that’s what I thought he said, and it was brilliant all the same. He was letting me know something many of us perceive: that in post communist Kosovo, religion is well and truly alive and kicking.

Witness prayers spilling onto the streets of Vusturri on a Friday, packed Cathedral congregations in Gjakova on a Sunday, or joyful community gatherings of the Protestant Community at Easter in Prishtina, and one could be forgiven for thinking that Kosovo’s religious communities are rooted in some other soil than that of a secular state.

There is, however, an enormous elephant in the room in exception to all this good health: The numbers of people practicing Serbian Orthodox Christianity have significantly reduced; due to their flight and slow return rates to Kosovo. In some places the threads look decidedly bare: Today the Orthodox Church in Prishtina runs on a skeleton crew, the Church in Gjilan, though tidied up, feels tired. Yet despite this, dedicated monks, priests and lay people practice their rites with a vigor and commitment that belies the ‘cross they bear.’ On a saint’s day in Prizren or Gracanica, the faithful turn out in numbers that fill ceremonies with gravitas.

Setting aside this elephant, finding a clear measurement of changing attitudes towards religion is far from straightforward. First you need reliable historical data, and therein hide lies, damn lies, and statistics; the data is incomplete or corrupted. 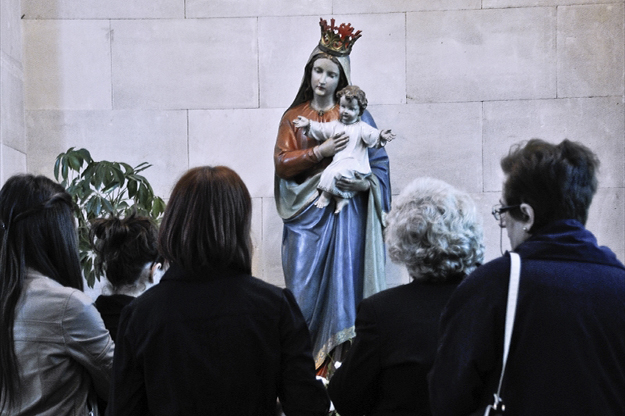 Secondly, you need to think deeply about the methodology for capturing data. Questions need to be asked such as: Does identifying with a religion infer practicing a religion? Is a Christian a Christian because they celebrate Christmas? Or, does someone who attends Church or Mosque always do so out of religious conviction? These questions are unanswerable without extensive forethought and clever research. Most modern studies therefore avoid complications. They ignore practice and focus purely on identification.

Lies, damn lies and… reasons why

The widely referred to census of 2011, which was boycotted by Serbs, reveals a 95 percent Muslim majority, followed by a Christian minority of 2.2 percent and 0.16 percent declaring ‘other’ or ‘none.’ The census, however, had no space to elect ‘Protestant,’ or distinct Sufi sects. (A KPEC— Kosova Protestant Evangelical Church — objection was brought to the Constitutional Court and rejected). Critics also suggest census takers at times automatically assigned Islam to persons without soliciting explicit answers or ignoring their verbal objections.

All methods of framing questions and collecting data can be justifiably critiqued. So, in an attempt to make some small, highly unscientific clarification, this time including Serbian Orthodox, Sufi Muslim and Protestants, the following question was posed to sources within Kosovo’s religious communities: How many people identify themselves as belonging to your community?

Putting the results together, we come up with a picture for religious identification in Kosovo looking something like this: 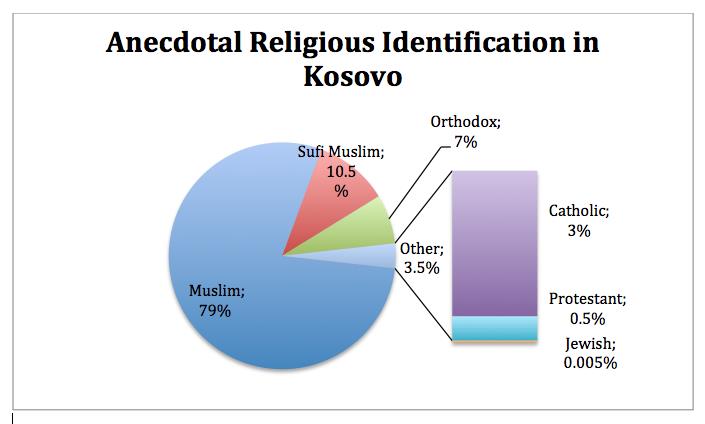 Anecdotal data is strictly unscientific and should be read critically [the writer makes no attempt to pretend otherwise]. There may be a natural tendency for communities to overestimate their own numbers. A table detailing incomplete responses — there were a number of gaps in the answers provided — is available here. Figures for Shia Bektashi have not been ascertained. Total population taken as 1.85 million.

Due to lack of response from the Islamic community, those remaining, after applying the numbers provided by the other religious communities, have been assigned as Muslim.

We know the majority of people in Kosovo identify as Muslim, but how many people practice and to what degree, remains a mystery. Catholic Bishop Dode Gjergji was recently reported saying: “Only 10 percent of Kosovars practice their Muslim faith; the rest are secular,” but no one really knows.

To find out if Kosovo is becoming more religious historical figures are needed to measure changes. But, problems arise here, because there is no decent data on religion from the Yugoslav period. Instead, it may be better to leave more questions hanging in the air than answers – and to await more accurate data in the future. Perhaps next time census data will accurately include religious minorities, atheists and agnostics. Perhaps the long held up amendments to the Law on Freedom of Religion will require individual religious communities to register, audit themselves, and create more transparency. Until then, we’re flying in near darkness.

If we put the problems of stats aside though, based on observation and anecdote, we can assume slow growth across Protestant, Catholic and Muslim communities, following the war. But why is this?

Charitable post war NGO and humanitarian groups came to Kosovo from far-flung corners across all the faiths. Today we read much about foreign funds flowing into the Islamic community, but it may be just as true to say that all religious communities benefit from external funding, relief and investment, including support from the Albanian diaspora.

Lulzim Shehu of the Sufi ‘Union of Kosovo Tarikats’ points to this post war period as an opportune moment for religious resurgence: “In post 1999 conflict expression of religiosity got full affirmation. Kosovo became open to all influences. Money was flowing from everywhere… latent, intimate, and outwardly not expressed religious identity moved to be more visible and eventually become more elaborated.”

During conflict, big answers to questions of life and death are raised, but survival dictates that they may not become formalized into spiritual practice until peace returns. When peace — as defined by an absence of war — returned to Kosovo it was with the feeling of new beginnings. A space for new explorations of religion, in a society less restricted by communist attitudes, emerged. 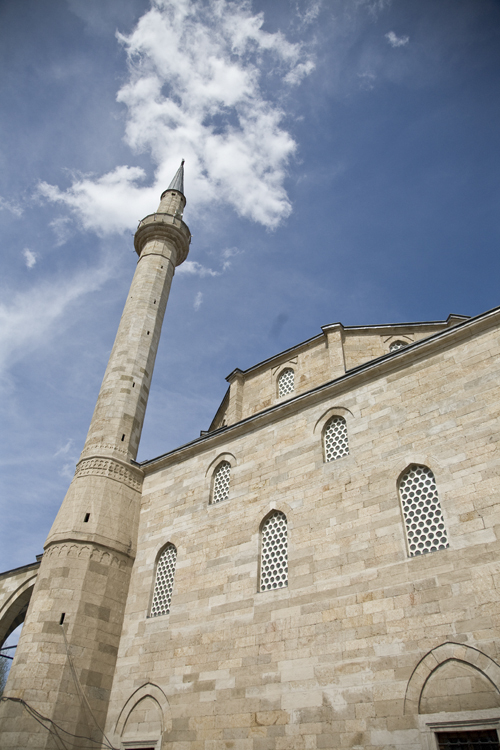 Fetiu has noticed a resurgence across communities but is particularly observant of increased practice in the Muslim community: “The fasting of the month of Ramadan is held more vividly after the war and this is an increasing phenomena,” he said, adding, “literature circulates freely and internet has had an important impact.”

Shehu concurs with him: “[An] Influx of printed materials on religious matters and general increase of information in the internet era in post war Kosovo brought increases in religious understanding, but also problematic doctrines,” he emailed.

Incidentally, a recent report by the Kosovar Center for Security Studies found foreign influence was not the central cause pulling people into extremist violence in Syria. Though reasons for radicalization overlap with those for increasing religious practice, they are also ideologically distinct: one can be religiously conservative while wholeheartedly rejecting violent extremism. A beard doesn’t make you weird, in any religion, though it is a commonly voiced misperception.

An argument runs that where government has failed, religion has delivered. Last year’s opinion poll by the RIINVEST Institute proves a case in point, showing that people have much more confidence in religious institutions than they do in government, public administration or political parties. Failures of governance and the ‘turning of a blind eye’ by post war international institutions, have also been used to explain religious expansion.

Other factors contributing to religious resurgence include the observation that religious groups often have the highest birth rates, perhaps through moral emphasis on a family life. Though not an exclusively Catholic tradition, Don Lush Gjergi notes steady growth in his community, where birth rates are 20 percent above mortality. But he adds, “unemployment… [and] financial insecurity, obliges our youth to emigrate to the West. This causes continuous removal of young families.” Others suffering social exclusion, unemployment and poverty may well be attracted to the sense of belonging and purpose religious life offers.

The simultaneous rising of a secular state alongside religious reappearance sometimes manifests itself as talk of ‘moral panic.’ As if more religion was abhorrent to the running of a secular state. But, in an interview with Interfaith Kosovo, Professor Miroslav Volf, of Yale University, optimistically suggests the two can coexist: “each of them can contribute and each of them is an equal party in debates about the future.”

Like other former communist countries, this coexistence is Kosovo’s story. And, when all the forces affecting this country are taken into consideration: from the fall of communism, to post war humanitarianism, to increasing access to information and ongoing social challenges, Arber Fetiu arrives at a simple conclusion: “Yes, there is a revival or return to faith and religious practice in Kosovo.” If only there was some decent data to back it up.