Lala Meredith-Vula: Kosovo’s landscapes seemed to me like paintings

Lala Meredith-Vula has spent the last 30 years photographing life in Kosovo’s rural landscapes. Though she grew up in England and now lives and works in Leicester, she was born in Sarajevo in 1966, where her English mother and Kosovar father initially met as students.

After leaving for the UK only four years later, it was her desire to reconnect with her Albanian father’s heritage that brought her back to Kosovo, and ultimately shaped the trajectory of her photography. Today, Meredith-Vula boasts a prolific body of work. Her famous series of the sculpturesque haystacks she encountered in Kosovo’s rural villages and the blood feuds reconciliation movement are among those on display at the documenta 14 exhibition in Kassel and Athens, one of the most renowned international art exhibitions in the world. 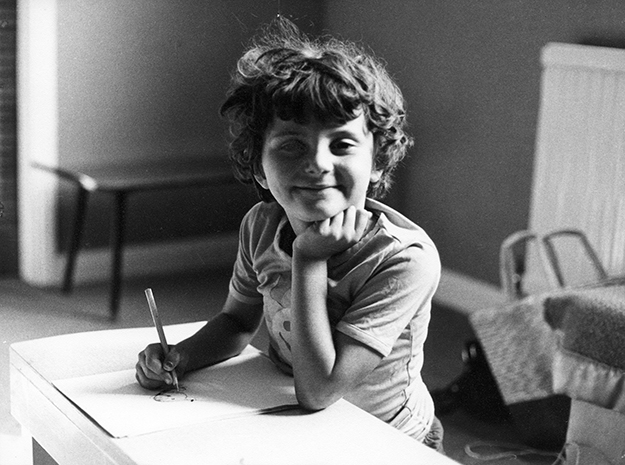 Drawing provided an outlet for Meredith-Vula in her early days of school in England as she adapted linguistically after leaving Sarajevo aged 4. Photo courtesy of Lala Meredith-Vula.

When Meredith-Vula returned to Kosovo for the first time at 16, not knowing Albanian meant she was unable to communicate with her family. But it was during this visit in 1982 that she experienced being witness for the first time, a position that she would continue to occupy throughout much of her later work. The year before, Kosovo had undergone a pivotal political moment: What began as demonstrations by students at the University of Prishtina turned into widespread protest by the Kosovar Albanian population, which was demanding autonomy after decades of cultural isolation and endemic poverty under the Yugoslav government.

Having had several uncles detained as political prisoners during the ’80s, Meredith-Vula tells K2.0 that she felt a major shift from what seemed a politically apathetic world that she had just left in Britain, to the politically immersed world of Kosovo, where politics seemed to be at the center of daily interactions, and made its way into every home. “The first words my family taught me in Albanian were ‘Republic of Kosovo,’” she says.

After completing her Bachelor of Fine Arts at Goldsmiths University in London in 1988 and showing in Damien Hirst’s seminal “Freeze” exhibition in the same year, Meredith-Vula returned to Kosovo to complete her postgraduate studies at the University of Prishtina. 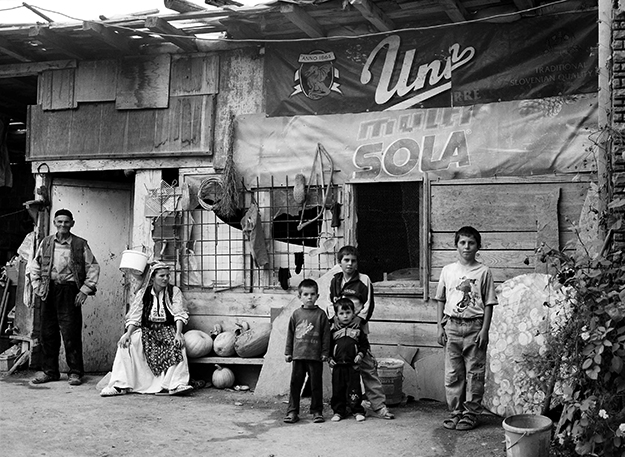 Meredith-Vula has been capturing village life in Kosovo for almost thirty years, including this 2007 photo from the village of Sverka e Gashit. Photo courtesy of Lala Meredith-Vula.

It was then that she began to take photos of Kosovar village life, capturing what she has described as “a way of life as old as the land itself, where farmers went about their business, and everything had its place.” But perhaps even more than the people, the figures that became most central to her work were the haystacks that she encountered all over Kosovo’s rural landscapes. Built on unstable wooden frames by villagers, Meredith-Vula documented these structures in various states of use. Their most compelling feature, for her, was the fact that they were functional structures, shaped unconsciously by farmers according to their needs, and resembling much of the sculpture and installation work she had seen in contemporary art galleries in the UK.

It was around a similar time, in 1990, that Meredith-Vula began documenting the blood feud reconciliation movement in Kosovo. The movement began with seven students and human rights activists, who were imprisoned for protesting Yugoslav abuses against Kosovar Albanians. In prison, they met other Albanians who were being held for ‘honor murders’ — revenge killings that were established in the ancient Albanian social code, the kanun, as a form of ‘self-administered justice.’

Seeking to end a tradition that led to pointless incarceration and divisiveness, the students sought to reconcile the feuds, and the movement quickly proliferated, with many feuding families across Kosovo coming out to seek relief from the burden of their vendettas. The figurehead of the wildly successful movement was Anton Ceta, the Albanian folklorist and academic who can be seen center stage in many of Meredith-Vula’s photos.

K2.0: How do you think your diasporic identity has influenced your work?

Lala Meredith-Vula: I’m not really a diaspora kid, as I was brought up in England with my English mother. However I had other identity struggles — my parents divorced when I was 4 and my mother took me to England for the first time. My first language was Bosnian which I quickly forgot upon arriving to England as my mother started to speak English, and I have clear memories of not understanding a word of English. At first I couldn’t speak to the kids at school but I could draw and so even then art became a strong tool for me. My biggest revelation came when I visited Kosovo again at the age of 16. I was struck by the warmth and exuberance of the people. This feeling lead me to want to live there later and make art there.

You mention that when you returned home to Kosovo, and began photographing the landscapes of Peja, Carraleva, and Dulje, you felt that you had come to the end of your search for what your artistic process is. What was it about these landscapes that made you feel that you had found it?

These landscapes seemed to me like paintings: with the wildness and danger of landscape paintings such as those by [Italian Renaissance painter] Giorgione and [French landscape and portrait painter] Corot. Kosovo’s landscapes always had people in them who related to the land and were part of the land. Not like what I’d seen from the vast mechanized agricultural land in England where one person could cover and maintain many kilometers and labor was not needed. Sheep were in fenced fields and no one needed to watch them. In Kosovo, the landscapes were very expressive. 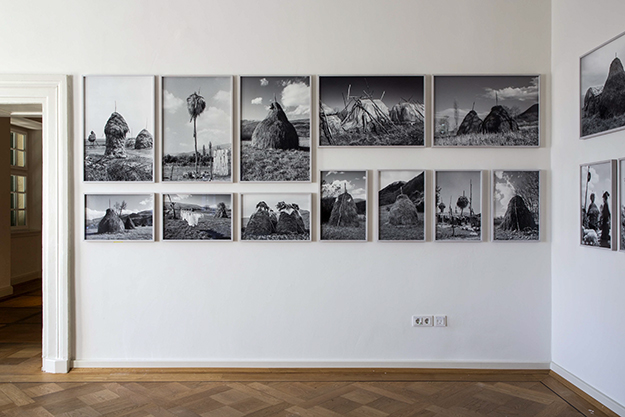 Meredith-Vula’s “Haystacks” series was selected to be displayed in Kassel, Germany as part of documenta 14. Photo courtesy of Daniel Wimmer.

Looking at your photos of village life, I think about how many of these rural landscapes possess a kind of nostalgic pull, especially for city dwellers. There is a sense that the rural village is the only place that has been able to salvage that slow, simple, and more communal life that is rapidly slipping away from the rest of us. I wonder — was this at all something that you felt you were documenting when photographing these villages?

I was documenting village life as it was interesting to me. At the back of my mind, I always had this thought that it might disappear, but had no idea how fast it would. I just took pictures that I found interesting at the time, and over the years, they have become more interesting to me because they seem to encapsulate time.  I see them as timeless as some paintings are. My “Haystacks” series, for example, is dated from 1989 to present day as a continuing project. In the Kassel leg of documenta 14, the photos aren’t presented chronologically, and it is difficult to tell which ones are from today and which are from 28 years ago.

My first thought about the “Haystacks” series was, as you’ve mentioned, that they looked like sculptures you’d find in galleries today. You’ve described the haystacks as a ‘meeting place’ between the world of modern art you’ve been raised in, your own artistic process, and your past, in the landscapes of Kosovo. Can you talk more about why they have become so significant to you?

The haystacks seemed a brilliant focal point in the landscape. They represented so much: they are man-made, but made up of natural material. They are the fundamental food of animals, a store for winter. They make me think of a biblical quote — “all flesh is grass” — which reminds us that we must value our lives and put things into perspective, and to concentrate on the important matters of life while we still have it. There are many connections, anecdotes, and idioms related to hay in both Albanian and English, this is just one of many.

The most brilliant quality about [the haystacks] is that they are functional shapes — there is no aesthetic guide to the shape they take. The farmers weren’t arranging them like flowers, to look good. The shape the haystack makes is a result of the function it has and not the way it looks. 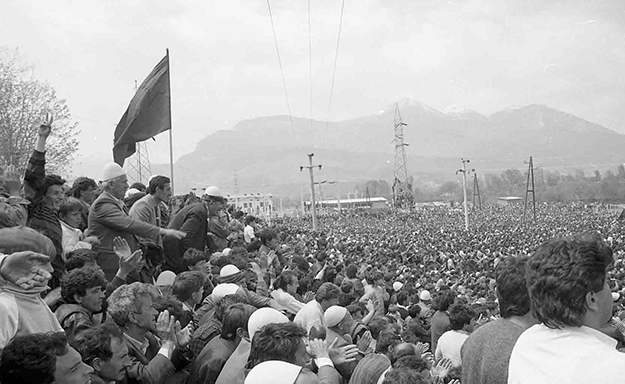 Another major series of yours in the exhibition is titled “Blood Memory.” How did you begin documenting the movement to end the blood feuds?

How did the process of reconciliation often go?

It would start with identifying the various blood feuds within the village and then the local reconciliation committee group would visit the families involved to try to get a reconciliation. Then a date would be set and the two families would meet in a public reconciliation ceremony. At the ceremonies there would be readings, Anton Ceta and professors and respected people would attend and give speeches. Then one by one the various feuding families would come forward and hug or shake hands to an applauding audience.

There are some quite incredible photos from this series of all the villagers coming together to witness the reconciliation, which you’ve described as moments of unity arising from a common desire for change. What was it like being in those crowds? Did people often ask you why you were photographing them?

It was one of the most unforgettable experiences of my life so far. There was a collective feeling of hope — that under oppressive circumstances, we at least had each other. There was a feeling of history being made and of everyone sharing a great moment, like what I imagine it was like when Ismail Qemali declared Albanian independence to a crowd. It was a very awe-inspiring event. You felt that you were in the midst of something important.

There were other reporters there and it was a public event, so it was not strange to see someone with a camera. No one asked me why I was photographing them — they were more interested in who I was and where I came from. 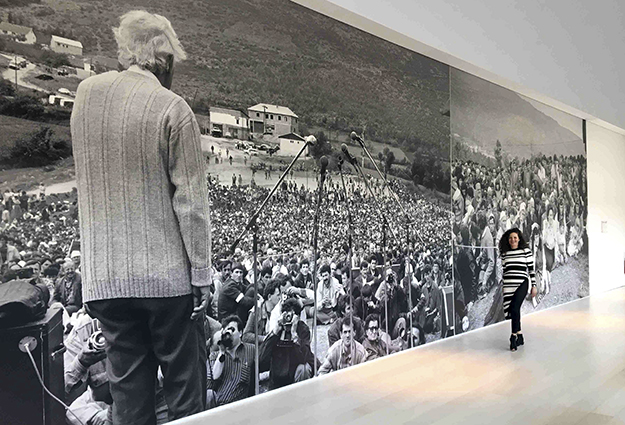 Meredith-Vula with her work from the series “Blood Memory,” on display in Athens as part of documenta 14. Photo courtesy of Lala Meredith-Vula.

How did you get involved in documenta 14?

The artistic director was visiting Kosovo when I had my personal exhibition on ‘Blood Memory’ on display at the National Gallery of Kosovo in March 2015. Erzen Shkololli, then the director of the gallery, was able to recommend my work. The documenta 14 team then visited my studio in Leicester and the invite shortly followed. The invite letter arrived in the mail with a postmark from Athens!

This year’s documenta, titled “Learning from Athens,” seeks to engage with some of the most challenging crises facing Europe, which only appear more pronounced today — immigration, displacement, war, and the ongoing colonial conflicts between the Global South and the “cultural centers” of the world. How would you place your work within this theme?

My work follows the human story within a geopolitical context. This carries notions of political and cultural neocolonialism, especially in connection to the Balkans, as I show inspiring beautiful images that are like paintings in an art context.

The Balkans has always been a region culturally and politically peripheral to Western Europe. What might we make of the fact that historically marginalized art, like Albanian or Kosovar art, is now being represented in prestigious international exhibitions?

In my work, I’m asking the viewer to connect to this world of eastern Europe and to value it. I want to show some of the ancient traditions that should be honored, such as respecting humanity, the individual, the other or ‘the guest,’ — a code that can be found in the Kanun of Lek Dukagjini, which possibly dates back to Illyrian times. So now marginalized art, like Albanian and Kosovar art, is being represented in prestigious international exhibitions as the art world is looking for new inspirations having burned out on capitalism.K