Activist vows to use all legal options available.

The first ever known request by a transgender person in Kosovo to formally change their name and sex marker in their identification documents has been denied. Blert Morina submitted the request to change his name on his birth certificate, ID card and passport from ‘Blerta’ to ‘Blert’ and sex marker from F (Female) to M (Male) to the Office of Civil Registry in his hometown in Gjakova last month.

But earlier this week, Blert was informed by the Directorate for General Administrative Work within Gjakova’s Office of Civil Registry that his request had been denied. The decision was issued following a negative recommendation by a Commission within the Agency for Civil Registry, a body within the Ministry of Internal Affairs that is tasked with making recommendations on requests.

Blert was assigned a female biological sex at birth, but self-identifies as a man in all spheres of life, from his family and social circles to his work. He had filed the request for his documents to match his identity in an effort to enjoy full inclusion in society, as the mismatch between the two has led to him experiencing regular discrimination in his daily life. 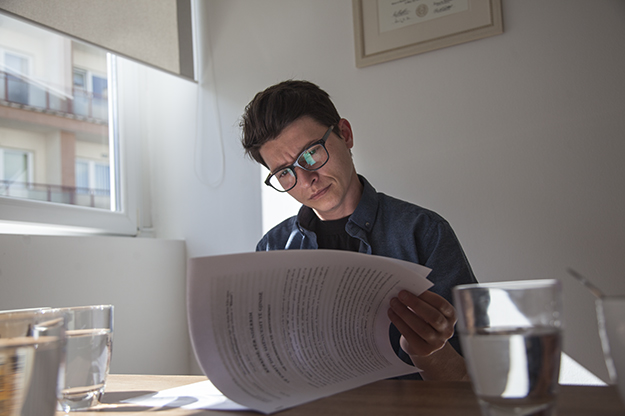 As presented in a six-page request filed to officials, Blert and his legal representative explained how the current identification documents hamper many activities that he undertakes in his everyday life, from accessing institutions to the bank — at any time and circumstance in which he has to show his identification documents. They particularly highlight the unpleasant experiences Blert suffers every time he crosses a border, as he is met with a thorough investigation as a result of his gender identity expressed through appearance not matching the sex and name in his identification documents.

“When we referred to integration in society, we referred to the obstacles that are encountered in daily life, because unfortunately the prejudices are extensive in our society and the installed norms are very strong, where a person necessarily needs to adapt in order to function more easily,” Blert says. “A different appearance from the one stated in documents makes the functioning of a person very difficult.”

As the basis for formally changing Blert’s name and sex on official identity documents, his application referred to the Administrative Instruction on the Conditions and Procedures for Personal Name Change and Correction, specifically the provision that states: ‘Personal name hinders person’s integration into society.’

However, the official decision, quoting the recommendation of the Agency for Civil Registry’s Commission, states that the application didn’t meet the conditions of the Administrative Instruction. “The Commission evaluated that the offered reasoning from the applicant that filed the request doesn’t stand … as ‘Blerta’ doesn’t hinder the person’s integration into society.” 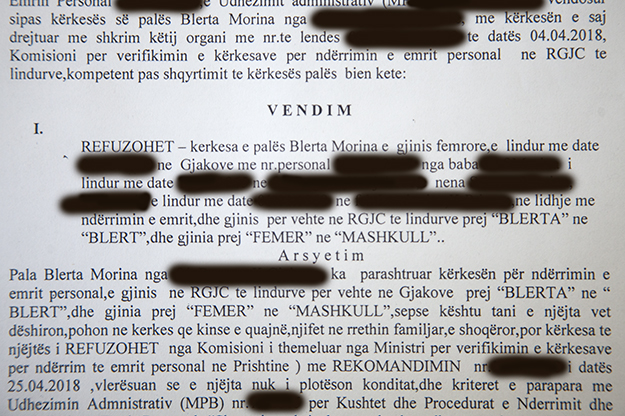 Rina Kika, the human rights lawyer representing Blert, points out that no further explanation or reasoning is offered on how the Commission reached its recommendation. “They didn’t explain in any way why it doesn’t hamper [Blert],” she says. “How do they reason it? How can they dismiss a six page request containing legal argumentation with just a simple reasoning that it doesn’t hamper a person’s integration into society?”

Kika, who says she has now referred the case to Kosovo’s Ombudsperson, states that the lack of further legal explanation is unacceptable. “They can’t say just: ‘No, the person doesn’t meet the requirements,’” she says. “Which condition isn’t being met? How do you measure that condition? How do you measure the integration of a person into society?”

LGBTI activists have previously expressed concern that when it comes to dealing with a request for changing a person’s sex marker, institutions might be unclear what to do as there is no specific administrative instruction that clearly outlines this process. However Kika considers that the same Administrative Instruction used for a name change is equally sufficient for changing a sex marker and that there is absolutely no legal reason preventing this from happening.

“The legislative framework is comprehensive and the lack of a [specific] administrative instruction isn’t a reason to deny changing the sex marker,” Kika says. “And we presented these [legislative] bases when we filed the request.” 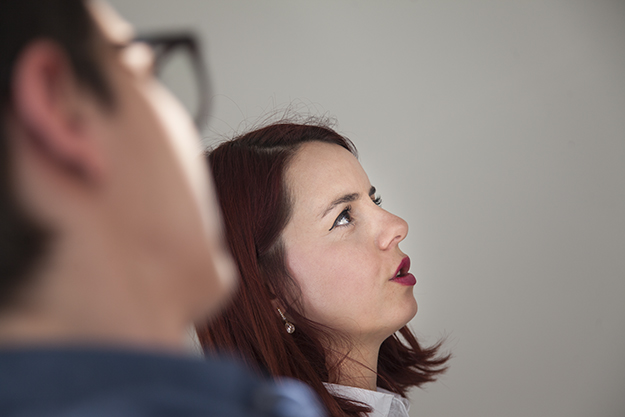 Human rights lawyer, Rina Kika, says that she and Blert are prepared to take all legal steps necessary in order to get Blert’s name and sex marker changed on his identity documents. Photo: Majlinda Hoxha / K2.0.

As the legal basis presented in the request submitted on behalf of Blert, Kika highlighted both the Law on Gender Equality and the Law on Protection From Discrimination, which both recognize gender identity. The request also referenced international conventions that oblige the state to protect all citizens and treat them equally; the Universal Declaration of Human Rights, the International Covenant on Civil and Political Rights, and the European Convention on Human Rights, all three of which are applicable in Kosovo. It also referred to cases decided by the European Court of Human Rights which are binding and applicable in Kosovo according to Article 53 of the Constitution.

“I consider the decision to be discriminatory, and we will be using all the legal measures we have at our disposal in order to reach the point where Blert will enjoy the rights that he is entitled to,” says Kika. She adds that she will file an appeal to the Agency for Civil Registry and that, if required, both her and Blert are determined to take the battle through the whole judicial system, up to the Constitutional Court.

Meanwhile, for Blert going through this process publically is fundamentally important, as a positive outcome could prove to be a landmark moment for the transgender community in Kosovo.