Letter from a friendly ‘inadmissible’ person

On the evening of September 5, I was supposed to be checked into a Brussels hotel, drinking a beer and preparing for the follow day’s meetings with Tanja Fajon, Ulrike Lunacek and other top European Union officials. Instead, more than 10 hours after first touching down in Vienna for my connecting flight, I was being escorted by police onto a plane heading back to Prishtina.

As the acting director of Youth Initiative for Human Rights (YIHR) Kosovo, I had been invited by Civil Rights Defenders along with representatives of three other local NGOs, to a study/lobby visit to the EU’s headquarters in Brussels. Our organization is dedicated to the process of dealing with the past, empowering the rule of law and the role of youth in Kosovo, with a particular focus on the protection of human rights; these high-level meetings were set to be very important in seeking to address the issues that young people in Kosovo face. 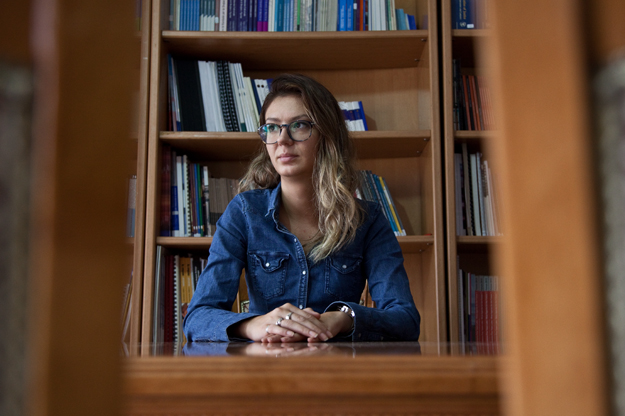 One of the topics we had chosen to raise in Brussels was freedom of movement and education. It was ironic then, that my trip to attend these discussions was abruptly cut short. Despite being invited by the above mentioned institutions, what followed confirmed my belief that good behavior and fair treatment are at times not reserved for everyone, regardless of the common presumption.

It was all going well until we landed in Vienna. There I was stopped at immigration and told there was a problem. The issue, they informed me, was my single-entry Schengen visa, which had been issued by the Swedish Embassy in Skopje. According to a list of Frequently Asked Questions published on the European Commission’s website, traveling to one Schengen country with a visa issued by another should not be a problem: “As a general rule you may cross any Schengen border with [a] visa issued by any Schengen country.” A caveat adds: “The short-stay visa does not automatically entitle you to enter the Schengen area,” before giving examples of extra evidence that you may be required to show upon entry — none of which I was asked for.

Subsequent research has suggested that this is a legal gray area with different interpretations of the Schengen visa regulations seemingly applied at different borders. The Austrian authorities chose to take my passport from me, before ending my trip to Brussels by annulling my visa.

After the annulment, I was escorted by police for ‘further procedures,’ although the explanation of these was hazy; the only information from their side was that I needed to wait for the ‘procedures’ to be finished, although it soon became clear that the police officers were themselves unclear what they should do next.

There I was, a human rights activist from Kosovo, attempting to defend my right to information on the whereabouts of my travel documents, in a European Union country.

I always hated airports, but this one turned into a prolonged resting place for me — except I couldn’t rest; I had no idea where my passport was, nor my luggage that had been checked in. At a loss of what to do, I instead decided to complain to the airport’s legal department. I wanted to find my passport,  my Kosovo passport, in Austria. It’s rarely seen as a document with much value, but in that situation it was the most valuable thing in the world to me, and I just wanted to get back to Kosovo as soon as possible.

Despite asking police for the location of the legal department, no one, literally no police officer, could tell me where it was, or even if there was one. In search of information, I instead decided to check to see if they could help me back at passport control, where I was faced with a dismissive response by the passport controllers who showed no interest in my concern. As with the other three attempts I had made to get information about what was happening, I was told that I need to wait until the ‘procedures’ were finished. There I was, a human rights activist from Kosovo, attempting to defend my right to information on the whereabouts of my travel documents, in a European Union country.

This process of waiting due to bureaucratic procedures took no less than 10 (ten!) hours. For 10 hours I waited for the Austrian authorities to fill out a two-page form on my return trip to Kosovo, all the while without sight of my passport, which regardless had already had my visa annulled.

Eventually, police officers came up to me and escorted me to the plane, where I was the first to enter, and the last to exit. Even at this stage I didn’t receive my documents, which were instead handed to the flight attendant, and upon arrival in Prishtina, onto an aviation employee who was waiting for me. After a final escort to police and passport control, I finally got my hands back on my passport and for the first time was able to read the official paperwork issued by the Austrian authorities. 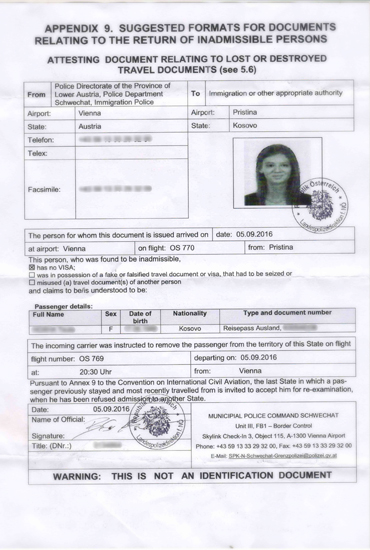 The document, entitled “Attesting document related to lost or destroyed travel documents” declared me an “Inadmissible Person,” with no further information provided other than a simple tick in a box next to “has no visa.” According to my understanding of the long and complex European Union’s Community Code on Visas, I should also have received a written document setting out a more precise reason for my visa being annulled, but I did not.

Whether or not the Austrian authorities were technically correct in their decision to turn me back, I still don’t know; I have yet to receive any formal explanation. However for me their handling of the situation was inexcusable with the whole experience from beginning to end making me feel like a criminal. In my opinion there is no justification to hold a person for more than 10 hours without information or involving them in the process.

Despite my experience, I am conscious that I was lucky enough to have traveling experience, money and to be able to speak English; privileges a lot of Kosovar citizens do not have.

My story should not be taken as an individual case, but rather as one of many examples of isolation caused by the visa regime that Kosovar citizens have now faced for more than eight years, since Kosovo’s independence. These measures, and this isolation, create the impression to the country’s young people that they are “the outcasts of Europe,” instead of feeling part of Europe and the world.

I continue to believe that freedom of movement is a human right, should be treated as such and should apply equally to Kosovo’s young people. Ironically, this was one of the topics that we wanted to speak about in Brussels before my journey was prematurely curtailed.