Tucked away behind Prishtina’s central government building, away from the busy pedestrian boulevard and around the corner from the lively cafes of the Qendra neighborhood, sits Art e Zanat.

Close to but hidden from the bustle of Kosovo’s capital, stepping into the little shop feels like a discovery: shelves filled with postcards, brooches and other items designed not with the standard tourist-friendly colors and photoshopped images often associated with these kinds of product, but with symbols and artistic depictions of Albanian heritage and the cities and landmarks of Kosovo. Albanian clothing, instruments and architecture all feature; as do Prishtina’s skyline, the Newborn monument and the Yugoslav-era basketball stadium.

Art e Zanat was opened by Podujevo-born artist and graphic designer Ilire Lepaja in August this year to show and sell products featuring her artwork. It is the latest phase of a project three years in the making, with Lepaja having previously sold her products at craft fairs, in Prishtina airport and Soma Book Station.

A graduate of the University of Prishtina with a master’s degree in graphic design, Lepaja has worked in several graphic design studios and as a freelancer for NGOs — including The Ideas Partnership, with which she still works — and other organizations.

She set up her own business in 2013 and began creating illustrations featuring traditional Albanian motifs and depictions of her adopted city of Prishtina, hoping to find an artistic outlet for her own skills and passion while promoting Kosovo as a newborn country. 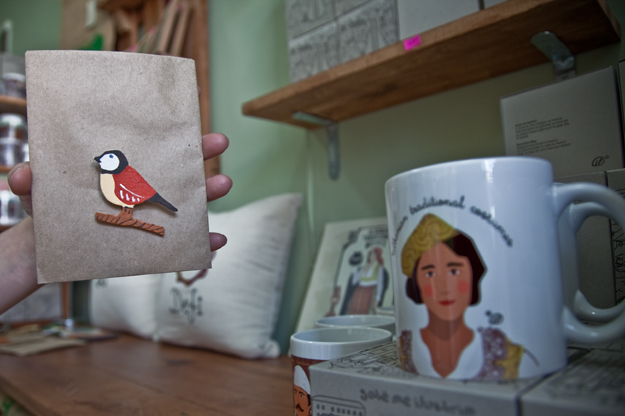 “I’m inspired by life itself and I love my country,” she tells K2.0, pointing to Kosovo’s rich culture, which she says is not always celebrated or understood by visitors. “For this particular project I wanted to create something good to promote our cultural heritage and our cities; and also to promote myself as an artist, and to be independent by working on my own business without someone telling me all the time what I should design. This is how I give my best, freedom inspires me the most!”

She spent a year on the designs, choosing to display them on postcards, which are well suited to displaying art while being small and relatively inexpensive. Lepaja says she would like to see postcards used more widely in Kosovo, with much of the shop’s custom currently coming from international visitors.

Struggling to pursue her passion alongside her work in graphic design, Lepaja left her job to commit herself to her own work and to start her own business. “That’s what I really enjoy doing,” she says. “It took courage but I think all dreams somehow require courage and risk-taking.”

The project was initially self-funded, but last year she received support from the Ministry of Culture and this year from the Municipality of Prishtina and she continues to work as a freelancer and prepress designer.

Lepaja combines both traditional and modern techniques in producing her work. Her designs are produced using graphic design software like Illustrator, Photoshop and CoralDraw, while the postcards are printed on recycled paper, and the fridge magnets on wood plaque using a two-step process: The wood is cut into custom shapes using a computer-controlled cutting machine, and the designs printed using a ultraviolet printing process in which ink is dried immediately using UV light, which prevents the ink from spreading and allows for finer detail.

In spring this year she took part in the Development Academy program organized through the EU and the Riinvest Institute, which has helped her to expand her range into embroidery.

The three-month program involved lectures on business management and project planning and was attended by small business owners — who received grants for successful completion — as well as representatives from civil society and municipal governments. 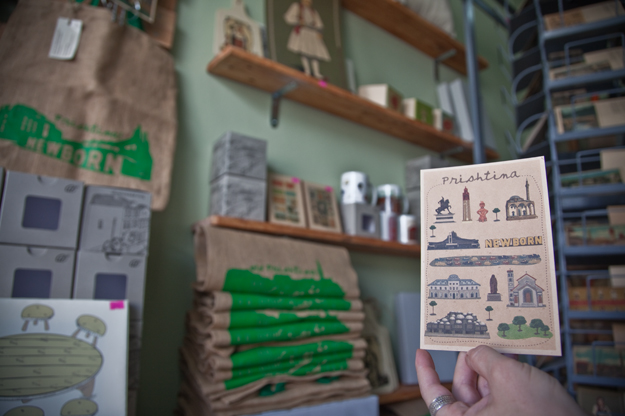 With the idea of promoting cultural heritage through embroidery techniques, Lepaja completed the program and received the donation of an embroidery machine with which she has been able to make products such as tote bags, decorative pillows and table covers. She has also sought to grow her business by providing branded T-shirts, caps and tote bags for other companies.

The program allowed her to hire her first employees. “Since there are lots of unemployed women in Kosovo I took the chance to hire women,” she says, “one for sewing the tote bags, table covers and so on, and one to sell the products.”

Lepaja has also recently been asked by the Municipality of Prishtina to adapt her illustrations for use on the authority’s official notebooks.

Addressing Prishtina’s reputation for new businesses not lasting long, Lepaja is optimistic: “I think [the key to success is] working with a good strategy, and of course loving what you do.”

Art e Zanat can be found on Rr. Andrea Gropa, behind the government building (near Soma Book Station).