‘Love is a traditional value, not hate or violence’ - Kosovo 2.0
Blogbox | LGBTI

‘Love is a traditional value, not hate or violence’

Despite a successfully organized Pride, Serbian society is no closer to maturity or tolerance.

Belgrade’s fifth Pride parade without violence or incidents was held in the Serbian capital on Sunday (Sept. 16), under the slogan “Say YES.” The Pride stroll in the Serbian capital has been an event in the past five years that is characterized by being both a protest and a celebration, representing a sort of a coronation of ‘Pride Week’ — a variety of panel discussions, exhibitions, and other events dedicated to people who identify as LGBTQ status in Serbia.

However, under the glitter and rainbow color flags, not everything is so gay. 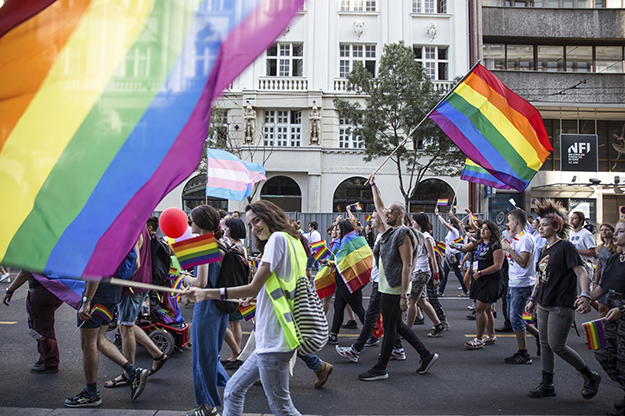 The Belgrade Pride organizers stated that, there were half as many police officers securing the event in comparison to previous years, when there have been up to 5,000 security service members present. However, the city center was blocked during the manifestation by police cordons, police vehicles, cavalry patrol, gendarmerie, and police dogs were on alert. Everything was conducted with no incident in sight, even though a smaller group of some 15 people with anti-gay billboards, Orthodox Christian icons, and a picture of convicted war criminal Ratko Mladić peacefully protested close to the police cordons. 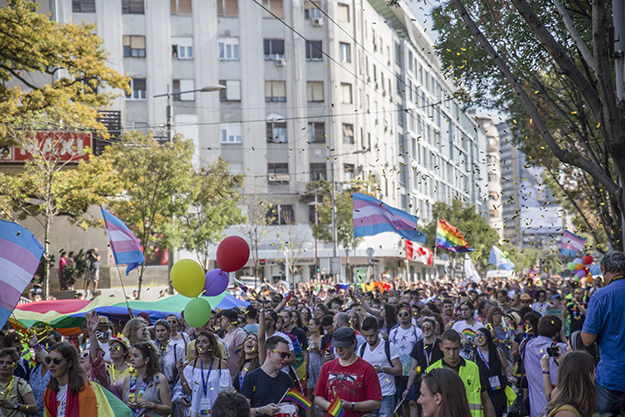 “Love is a traditional value, not violence or hate — I want to send this message with my outfit. I am very proud of you and myself,” Dita said during her speech ahead of the Pride march.

Journalist Suzana Trninić was declared the ‘godmother’ of this year’s Pride. In a touching speech ahead of the Pride march, she emphasized to present, including those of her friends who question whether LGBTQ people should be supported, that “you don’t have to love that which you don’t understand, but you are obliged to respect it.”

With strong words of solidarity for all those whose human rights are violated on a daily basis, she sent the message that “we will remember the friends who kept quiet more than the enemies who were loud,” calling on all those abstaining to join in the fight for a better society.

The parade, which started in mid-afternoon, ended in the Students’ Park, where, for the first time in history, there were Pride socializing and music programs until the early evening hours. 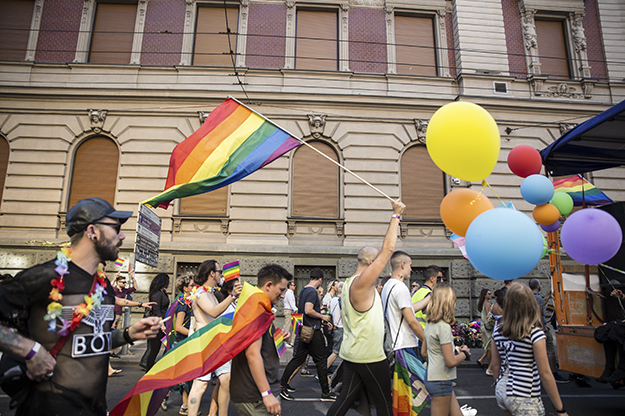 Besides a few hundred LGBTQ people from Serbia, there were also straight allies with their children and families, representatives of civil society organizations and local LGBT activists, as well as many LGBT activists from abroad and foreign diplomats.

Pride was also attended by ‘sentry’ Serbian officials and politicians. In the course of media addresses by the new mayor of Belgrade, Zoran Radojičić, and various ministers, one could hear well-known refrains about how “all citizens of Serbia, no matter their sexuality, gender, sex, skin color, and other personal properties, should be equal and how the state should work on improving their status by adopting laws.” 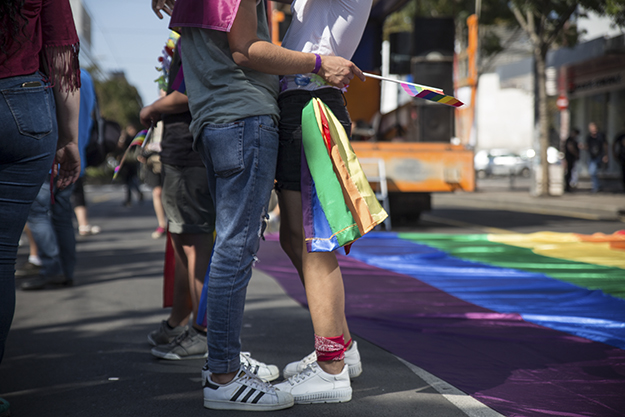 In practice, Serbia has been waiting for a same-sex community draft law, as well as a gender equality and gender identity draft law for many years. These laws would enable trans people to make gender changes in identification documents without mandatory sterilization or medical adjustment of sex. They would also enable transgender people to lead dignified lives without discrimination and rejection, even without having to out themselves when showing their non-gender specific document at places such as the bank, school, faculty, job interviews or hospital.

In 2013, the Criminal Code of Serbia introduced the notion of hate crime, but until this day there has not been a single verdict on this basis of violence against LGBTQ persons. On the contrary, in many cases of violence that have been reported, for example, those documented by the Da se zna! (Let it be known!) organization, perpetrators who have beaten trans and gay people using death threats, have received smaller, rather than bigger penalties, utilizing different “mitigating circumstances” for their crimes.

While the number of attacks against LGBTQ people has reduced, LBGTQ rights organizations say that a far greater number of cases are not actually being reported to the police out of fear, and due to a — one could say justified — distrust toward institutions. 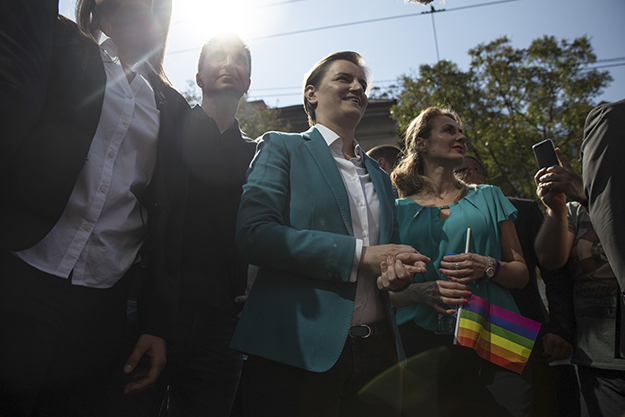 Prime Minister Ana Brnabić — the first woman and ‘out’ lesbian to hold such a high state position in Serbia — didn’t officially address the media, but prior to the march she visited Pride participants and spoke with activists. Many activists in Serbia, as well as LGBTQ people themselves, believe that Ana Brnabić isn’t doing enough — or indeed doing anything at all — to protect LGBTQ rights in Serbia, nor does she essentially understand them, and hence her appointment to the position of prime minister is pure ‘pinkwashing.’

On the official Twitter account of the Prime Minister of Serbia, where photos relating to events attended by Brnabić are posted on a regular basis, there were no posts about her visit to this year’s Pride. 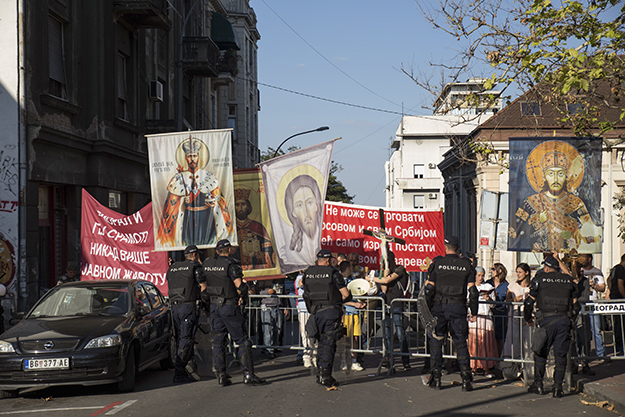 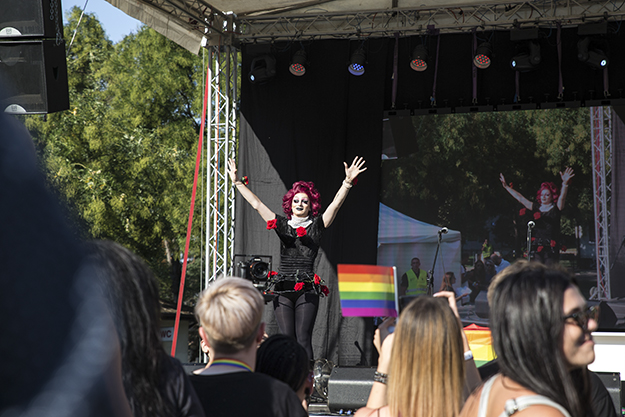 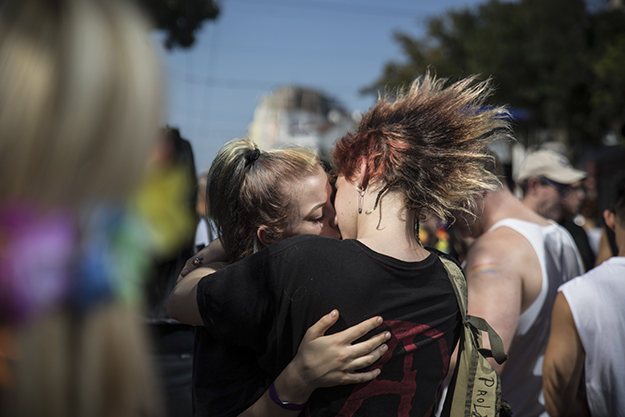 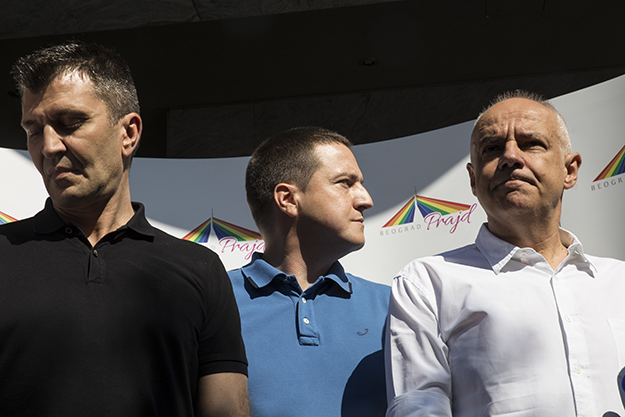 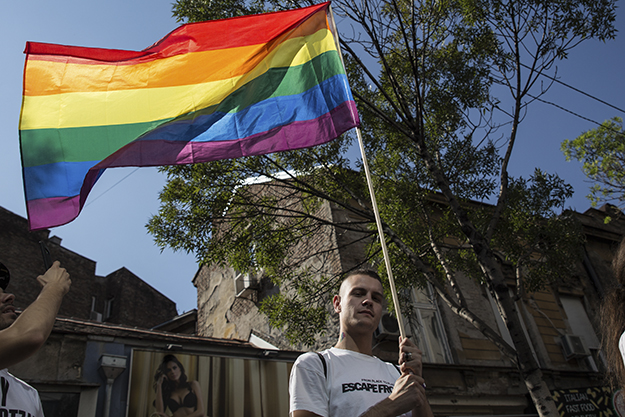 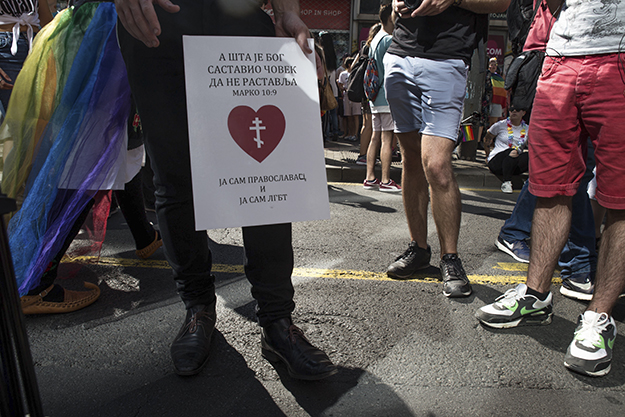 Also missing this year was clearly articulated and boldly placed political demands and messages on behalf of organizers, whether orally or through billboards. Demands are really only found on the Parade website, but the question is the reach of these messages and demands.

It seems that Belgrade Pride has fallen into a kind of identity crisis — somewhere between carnival entertainment and political protest — which raises questions about its efficacy.

According to the artist and activist for transgender people’s rights, Sonja Sajzor, this year’s Pride program and Pride Week were missing the visibility of transgender women. On social media, Sonja expressed her dissatisfaction, mapping out different issues in organizing the Pride, such as the exclusion of trans women from the panels discussing problems of transgender people in Serbia. Instead of transgender women, cisgender men — those whose sense of personal identity and gender corresponds with their birth sex — were engaged in the panels.

In fact, the LGBTQ movement in Serbia depicts the conflicting state of affairs in Serbian society as a whole. Even among LGBTQ rights organizations themselves there is deep discord, and therefore Belgrade has another, June Pride, led by a few organizations whose representatives disagree with the approach and ways of activists who organize the September Pride. 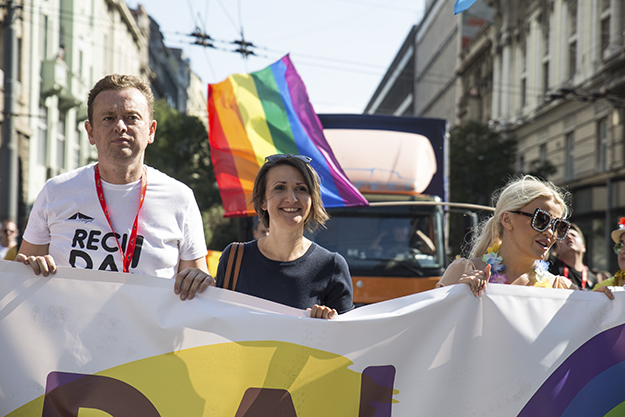 The chronically weak attendance of the local LGBTQ community at Pride may be linked to different factors: Above all, because people who haven’t come out to their families and other believe that they will be recorded and exposed to media lynching, while there is also a fear about personal safety while entering and exiting the event, particularly after high profile incidents of attacks and violence in Pride’s early years.

The negative comments by ‘ordinary citizens’ on social media, calls to lynch, kill, torture and persecute LGBTQ people, calling them “sickos,” “freaks” and other degrading names — all under the pretext of protecting “traditional values” — perfectly proves that Serbian society is not even remotely mature enough or tolerant, no matter the extent to which politicians and state officials want to convince themselves, the public and European community representatives otherwise.

In the afternoon after the Pride walk alone, the internet was flooded with numerous insults and threats sent to drag artists and LGBTQ persons for wearing Serbian national costumes in the context of the Pride, accusing them of “insulting religious feelings” and “desecrating our tradition.” 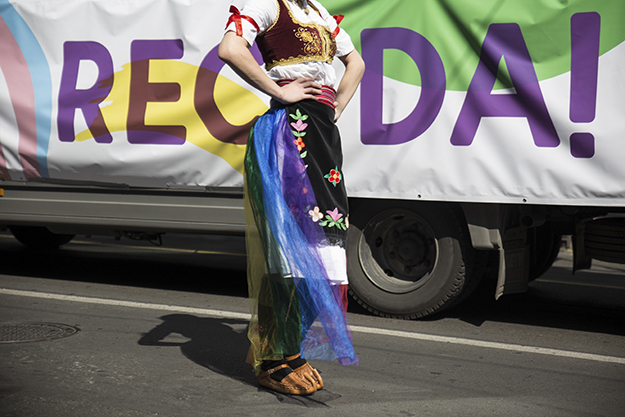 One tabloid even published a front page photos of one such activist in traditional dress, accompanied by homophobic statements made by right wing politicians; this is only the potential start of inciting hatred and intolerance for the purpose of increasing sales and gaining more clicks.

Such media behavior — as well as the behavior of some public figures in Serbia — mainly pass by without any serious sanctions, which is why they and their audiences are encouraged to repeat similar acts without punishment, with no fear of having to suffer the consequences.

A Pride without incidents, just like a lesbian heading a state, is not necessarily a reflection of the state of affairs of human rights in a country. In the case of Serbia, this is, unfortunately, still an illusion.

Is there any chance of meaningful change in [...]

There needs to be a reaction in order to change [...]