Lumbardhi: What it means to evolve

The story of Prizren’s historic cinema.

Tonight (Aug. 4), the 16th edition of DokuFest will be opened at Lumbardhi, the spiritual heart of the festival. Lumbardhi, to borrow words from Aslihan Demirtas, the Istanbul and New York based architect currently involved in the renovation of the building, is a “space and an institution that doesn’t have a fixed character, or a rigid identity to it. It evolves with time, with usage, with people, it gives itself enough time to think about processes, and then to revise itself again.”

Lumbardhi has reinvented itself many times since its construction in 1948, placed just across from the old stone bridge that leads to the ancient fountain in the center of Prizren known as Shadervan. It was not until three years later that the first movie was shown in the indoor hall, which coincided with a new law that banned the veil and any kind of face covering in the old Ottoman city. A new era of socialism had begun, and movies were being shown to the “nuclear family” directly to “naked” faces and wind beaten hair.

Years later, the state would also claim the front garden as a part of the cinema, and from 1958 it was made into the ‘outdoor hall,’ an open air cinema. Years passed, and the place became a favorite spot for friends and lovers to meet. For the workers of Prizren it became more than a cinema, it was a home away from home. People used to wait in line, as the cinema brought the world to them: Yugoslav movies, Westerns and other Hollywood films, Turkish dramas, and a variety of short and feature films from across the globe.

As was customary in those times, the films were usually followed by messages from the communist party, and by short video news briefings on new developments in Yugoslavia. Right up until the ‘80s, the cinema was always full, and, according to executive director of the Lumbardhi foundation, Ares Shporta, a black market for ticket redistribution even emerged. 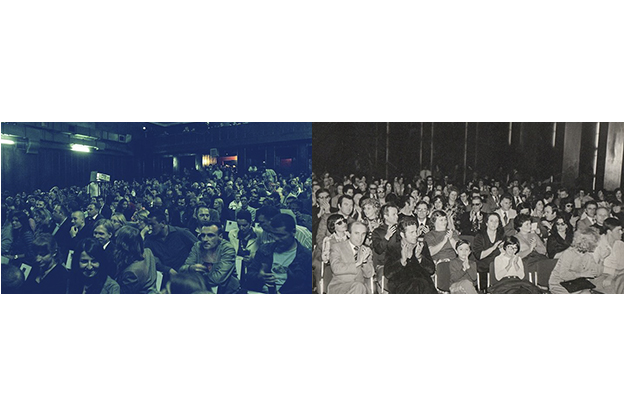 Lumbardhi screened films from across the world to packed houses throughout the ’60s and ’70s, before moving into other cultural events in the 1980s. Photos: Courtesy of Kino Lumbardhi’s archive.

Over time, Lumbardhi became more than just a cinema and closer to a cultural hub — it was a site for concerts and other gatherings. In 1986 “Zambaku i Prizrenit” (“The Lily of Prizren”), a festival for traditional Albanian songs, ballads and serenades was founded, and is still an ongoing event.

During the post-war era, the building received no institutional support and was largely abandoned, only occasionally frequented by some former employees of the cinema and their friends, who used it as a spot for meetings and playing games, as well as some sporadic use for summer concerts and festivals.

But as the saying goes, a city’s scars are a stimuli for the mind. Although one might think that state institutions would notice the beautiful building and would be preoccupied with its restoration, this is not how things played out in post-war Kosovo. It was noticed alright, first in 2007 when the Mayor of the Municipality of Prizren wanted to demolish it, but civil society, especially the DokuFest team and the Ec Ma Ndryshe NGO, gathered eight thousand signatures protesting its demolition.

A few months later the mayor lost his position in local elections but Lumbardhi came under threat again in July 2014, when it appeared on the radar of state institutions once more, this time the Privatisation Agency of Kosovo (PAK). The Agency, in a decision reminiscent of many of their others, intended to liquidate it as a public property, and most likely turn a piece of cultural heritage into a parking lot.

Again the request was fiercely opposed by the DokuFest team, who had been making use of it as a cinema for the festival since 2002, and were not yet ready to park their cars where once stood a beacon of emancipation and entertainment. They voiced their discontent at the opening ceremony of the 13th edition of DokuFest in 2014.

“The place in which we are gathered is a space which will never die,” declared DokuFest’s artistic director, Veton Nurkollari. “Born and raised here, the most beautiful memories bind us to this place forever — to Prizren. Kino Lumbardhi, Prizren’s first cinema, is being taken from us. You heard of it, you read about it, and it is true. We do not intend to give it up. We will change this together, which is why together we declare DokuFest open with a film which will convince us of how strong we are when we are united. Change! Do not hide!”

Nurkollari’s opening speech was followed by “Everyday Rebellion,” a documentary about nonviolent protest and civil disobedience worldwide. The fight for Lumbardhi was on.

Taking back the power

What ensued was the formation of an initiative to look into the existing legislation for possibilities to save Lumbardhi. Eventually, in January 2015, the Ministry of Culture, Youth and Sports confirmed that the cinema would be a part of the heritage list, and the PAK announced that the liquidation process was suspended. The opportunity was presented to create a cultural program, the Lumbardhi Foundation was established, and Ares Shporta was chosen as Executive Director. 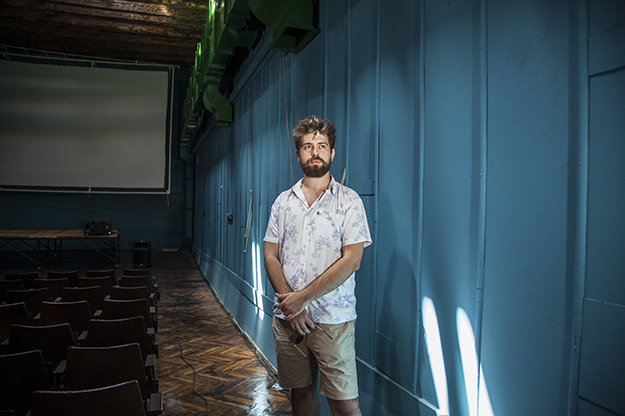 Executive Director of the Lumbardhi Foundation, Ares Shporta, wants the space to become a home for all manner of artistic and technological organizations. Photo: Majlinda Hoxha / K2.0.

Although the current ownership issue has yet to be regulated, this has not stopped the foundation from starting work there. From a building which had no running water, no electricity, and a completely dilapidated building, it has become a regulated and evolving space. Now when one enters the Lumbardhi “complex” you are met with the strong smell of fresh paint.

A new breath of life for Lumbardhi

Lumbardhi as a space started becoming most active in 2015 after the establishment of the Lumbardhi Foundation, which put on a short program of events which took place in the outdoor part of the cinema. For a short three month season there were movie screenings, concerts, festivals, lectures, mostly an ad-hoc program says Shporta, as a tryout for the potential of the space.

Program-wise, Shporta has been very busy trying to find out what suits a Prizren audience, and in the process create the identity of the space. “The aim is to turn Lumbardhi into a multifunctional cultural center,” he states. “Gradually we are trying out how we will do it, and this is the process. We want to be a space that produces cultural life during all the time in Prizren. A platform for debates and discussions on important social and public issues that touch everyone. To be an institution that thinks, produces knowledge, criticizes and involves people.”

Shporta says that the team want to achieve this by having an open space for people and launching initiatives to use it while giving something back to it at the same time. “We see Lumbardhi as a really important platform which will work towards a better future for the city — a place which will bring different organizations, groups and different communities together into a single one.” 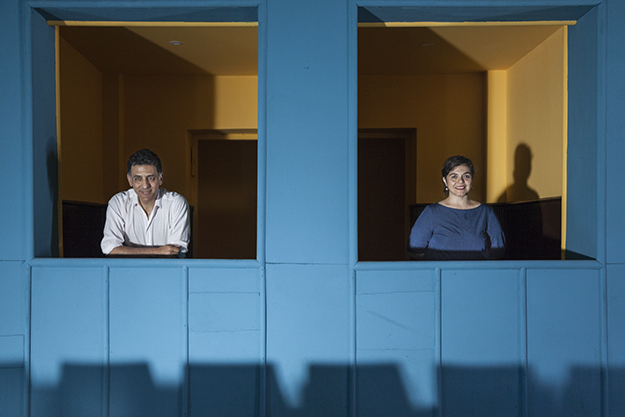 According to Demirtas, the aforementioned architect, the facade of the will become open for artistic, graphic and social production. “Lumbardhi is an interesting building, right by the river, a public space so close to the center, but weirdly has its back turned to it,” says Demirtas. She feels that such a lively and beautiful outdoor structure should talk with the city on an urban scale, and hopefully even “on a global scale.”

This is why the team is working on making the facade a canvas onto which art can be projected, imprinted or painted. Curators for the facade are planned to rotate every three to six months, or even a year, but so that it is constantly changing. “Nothing should remain fixed. One thing should replace another, and then it should accumulate,” Demirtas adds.

The foundation have also made a deal with the Agimi Cultural-Artistic society, that their five artistic sections are able to rehearse and exercise at Lumbardhi, and are currently talking to the City Orchestra, different amateur theatrical groups, and other talented young people. The foundation aim to assure all these groups that there is a place for them to call home, to practice their craft and express their talents.

But it is not just the arts that the Lumbardhi Foundation wish to house inside the space. Shporta adds that there were also meetings with groups such as the Open Space Community and FloSSK, and they are aiming to create a team from these organizations, who will inhabit a part of the building, and work on finding technological solutions to the practical problems in the public sphere.

The research, or the investigative phase which aims to create the identity of Lumbardhi will continue for a year and half more, says Shporta. The possibilities of Lumbardhi are numerous, and currently they have in plans to continue with the film, music and performative arts program.

There are also plans are for some heartwarming wintery concerts, because, Shporta says, “I have never in my life been in a concert during the winter in Prizren.” Hopefully this winter Prizren will have a venue for some live music, but if not this year, the people of Kosovo are good at waiting for the next one, and the next one. Better late than never.K