A look into the world of veganism and vegetarianism.

“Why did I become a vegan? The first reason is maybe because I love animals so much, and I can’t kill or eat something, or someone that I truly love or adore,” says Eldena Dakaj, a student at the Rochester Insitute of Technology Kosovo, and a member of the Termokiss collective.

She was a vegetarian for three years, before becoming a vegan last year. “I remember that I wanted to be vegetarian from a long long time ago, maybe from when I first heard the term,” she says. “We had many animals, we had chickens, some cows, a rabbit, and a dog, and I remember that I used to run after the chickens and hug them.”

As young as she was, Dakaj was always wondering, ‘Why do we have to eat them? Can we just not do that?’ These questions she asked her mother too, but in her family meat was always eaten, and her mother urged her to do likewise, reasoning that it was crucial for health.

Eldena accepted this rationale for a while, but then one day, her family decided to kill one of the cows. “That was the moment everything clicked,” she says.  She saw only a small part of the scene from her bedroom window, because it was so terrifying. From then on, meat became a food filled with sorrow for her. 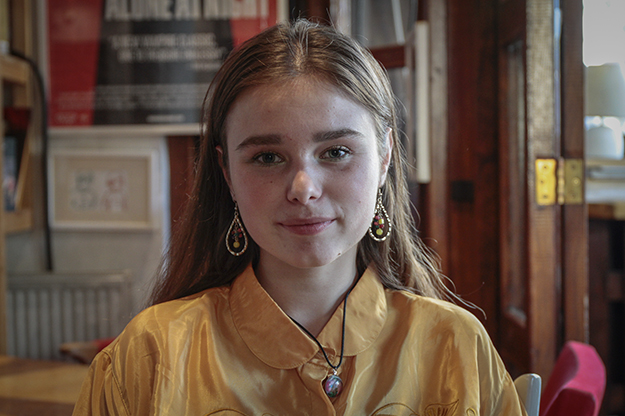 Eldena Dakaj’s attachment to animals led her first to vegetarianism before moving on to veganism. Photo: Fikret Ahmeti / K2.0.

It is not just Dakaj that has been put off meat by seeing its origins. In July, the Dallas Observer reported that a documentary entitled ‘What the Health’ was generating a large increase in customers at the city’s vegan restaurants.

The numbers of animals being killed for human consumption can be quite staggering. In 2010, the Guardian’s Environment editor, John Vidal, wrote that humans eat approximately 230 million tonnes of animals a year, which was twice as much as in 1980. According to the Animal Equality organization, approximately 56 billion farmed animals are killed each year, not counting fish and other sea creatures.

Then there is the amount of food used to maintain the animals. While livestock use more than half of U.S. grain, and around 40 percent of the world’s grain, 795 million people suffer from chronic undernourishment, and approximately 3.1 million children die from hunger each year.

It’s a situation that has inspired another Kosovar to turn vegan, activist Elza Ramadani. Ramadani believes that for every piece of meat you eat “there is another creature that suffers and dies for it.” She has come to the notion of “Letting life be” being her guiding principle. “Not only yours,” she explains. “But of others as well, every creature that has a nose or eyes, has a spinal cord, and can be hurt.” 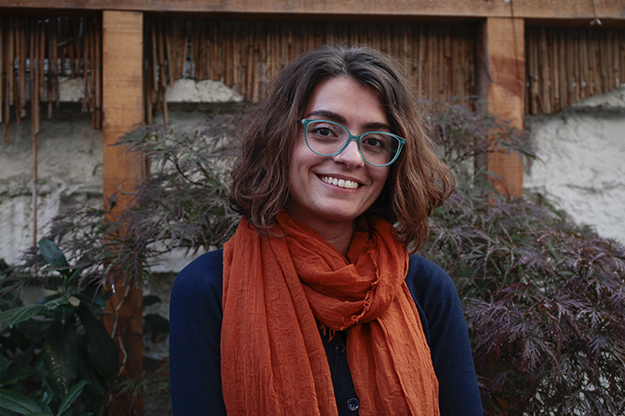 Alongside being a vegan, Elza Ramadani declares herself an ‘anti-speciesist’ who does not deem humans as superior to other animals. Photo: Fikret Ahmeti / K2.0.

Ramadani acknowledges that plants are also living creates, but believes that it is a fallacy to compare them to animals as they lack the nervous system and brain necessary to feel pain. She describes herself as “anti-speciesist,” a term which expresses the idea of humans not deeming themselves superior to animals.

A lot of hot air

Aside from issues over animal cruelty, there are other reasons for choosing not to eat meat, including those centred on the impact it has on the environment.

A 2006 study from the Food and Agriculture organization of the UN (FAO), found that animals bred for their meat accounted for 18 percent of the CO2 that contributed to climate change, more than cars, planes and all other forms of transport. A 2009 analysis from two World Bank scientists, concluded that livestock and their byproducts, account for at least 32.6 billion tons of carbon dioxide per year, or 51 percent of annual Greenhouse gases.

To put it another way, according to one Japanese study, to produce one kilogram of beef leads to the emission of greenhouse gases with the potential global warming equivalent of the CO2 emitted by an average European car every 250 kilometres, and burns enough energy to light a 100-watt bulb for nearly 20 days.

Other than being one of the largest sources of greenhouse gases, studies show that raising animals for food is heavily impacting our planet’s capability for sustaining life. It is the largest source of land use, from around 40 to 68 percent of Earth’s total land, and the cause of degradation of large parts of it. As one example, the creation of cattle ranches is blamed for 80 percent of deforestation in the Amazon rainforest.

So the solution to saving the world? Go vegetarian, or even better, go vegan. Marco Springmann, a research fellow at the Oxford Martin School’s Future of Food programme, together with his colleagues built computer models that predicted the outcome of a society where everyone had become vegan by 2050. His computer model showed that, largely thanks to the elimination of red meat, food-related emissions would drop by 70 percent.

However, other studies have rejected the idea, including a research paper entitled “Carrying capacity of U.S. agricultural land: Ten diet scenarios” published in the scientific journal Elementa.

Amidst other findings, the research found that if all of the world’s population was to go vegan, its diet would waste available land that could be purposed otherwise to feed more people through livestock farming. The study says that around one-third of the world’s land is composed of arid and semi-arid lands able to support only animal agriculture.

It concluded that the all vegan diet stood out because it was the only diet that used “no perennial cropland at all, and, as a result, would waste the chance to produce a lot of food,” while the lacto-vegetarian diet, where meat is effectively substituted with additional servings of eggs, nuts, pulses, and tofu, had the highest carrying capacity.

Veganism and the human body

But what about the arguments of Eldena’s mother, who believed her daughter needed meat for her health? Nutritionist Vala Pupovci says that as long as someone has a balanced diet and is taking all the necessary nutrients any diet can be healthy. Nevertheless Pupovci stresses that there is a general assumption that vegetarian and especially vegan diets, are unhealthy because there is a whole group of foods removed from their diet.

“For vegans in general, the problem is the proteins, but [replacing them] is something very achievable,” says Pupovci. “The protein in meat is a complete protein that has all the amino acids, while in a vegan diet you can receive those proteins by combining different foods, such as rice and beans, or hemp seeds or soya products.” 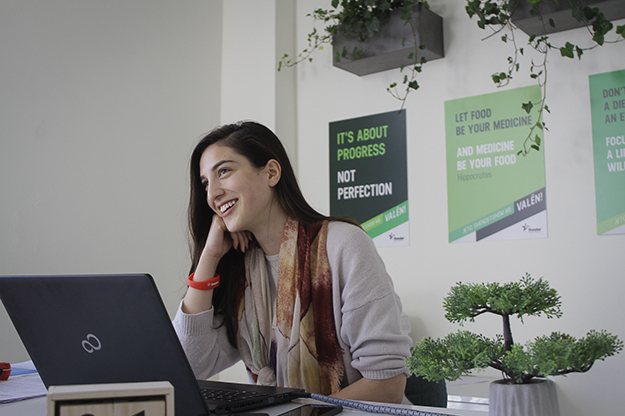 While nutritionist Vala Pupovci believes any diet can be healthy, including veganism, she believes it’s important to balance in other factors including stress and cost effectiveness. Photo: Fikret Ahmeti / K2.0.

What a vegan diet lacks, is vitamin b12 which is found only in meats and Pupovci recommends taking as a supplement, while everything else can be replaced with a variety of foods. Pupovci insists that any good diet, and especially the vegan diet, requires more attention, but also that one should “take into consideration whether you can meet those needs, and how much stress  it would cause you, because if you are stressed all the time about what you will eat it is not healthy, and also whether [a vegan diet] is cost effective.”

During her studies, Pupovci also learned about medical nutrition, and believes from that point of view, vegan and vegetarian diets have been shown to be more beneficial for health. Benefits include a lower risk for  cholesterol and high blood pressure, as well as a lower risk of cardiovascular disease, cancer, diabetes and strokes.

Being vegan or vegetarian in Prishtina

Ramadani and Dakaj are only two of the many vegans and vegetarians in Prishtina, a city that has recently become much more familiar with these terms. Or familiar at least with the concepts, because people tend to be reluctant in embracing the diets.

Typically, when someone announces that he or she is a vegetarian or vegan, it is followed by jokes: “What do you eat, grass?” “If a fish swims in water, is it a sin to drink the water?” “Plants have souls too,” and other such sarcastic remarks.

Nevertheless that is not the biggest difficulty in choosing such a diet. Until around six years ago, there was not a single vegetarian restaurant in Prishtina. There is still no vegetarian shop, but there are some larger markets, and some health shops where you can find different vegan based foods. 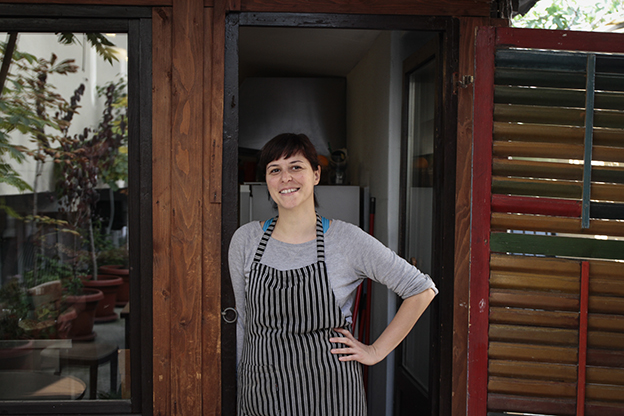 When Nurhan Qehaja, who is a vegetarian for around 11 years, came to Prishtina from New Zealand, she saw that there were few vegetarian options. “When I came here I said I want some falafel,” she says. “What should I do to get some falafels? I had to do them on my own and that is how it started.” ‘It’ refers to her vegetarian/vegan restaurant, Babaghanoush, the only one in Prishtina.

She opened her restaurant around five years ago, in the beginning only for afternoons. “Then it started from five o’clock. We worked like that for around four years, and now, in the last year, we are working all day,” Qehaja says.

Qehaja says that since she started her restaurant she noticed that there are lots of people who are not only vegetarians, but also vegans. That’s why everything in her menu now has a vegan option as well.

“There is a big change in Prishtina,” Qehaja says. “You know, you have no idea how many people that do not eat meat there are, it’s like they are hiding, and then they come out and say: ‘No, I haven’t eaten meat for many years now!’”

Qehaja worries that one of the main issues with veganism in Kosovo is cost. “For example we do falafel and humus, and they are foods which you can find way cheaper in Europe.” She blames the base material for the expensive price, because here for example the chickpeas are uncommon, and there is no demand for them.

She is trying to find ways to bring it here cheaper, so she can experiment more with cooking. “Hand on heart, I want to lower the prices, because it’s not like, ‘Hey I’m vegan and I’m going to be expensive’” Qehaja says. After all, her aim is for people and especially students to have access to vegan food.K