Mimoza Ahmetaj: The Balkans is a fragile region that is continuously influenced by external powers - Kosovo 2.0
One-on-one | EU

Mimoza Ahmetaj: The Balkans is a fragile region that is continuously influenced by external powers

New Minister of European Integration says the EU has a bright future, there is no plan B for Kosovo and border demarcation with Montenegro must pass in the Assembly.

In the seven years since the Ministry of European Integration was established in 2010, it has had three ministers at its head — Besim Beqaj, Vlora Citaku and Bekim Collaku. On February 14, Mimoza Ahmetaj was appointed as the fourth. The date happened to be Valentine’s day, however the new position she has taken is far from being a beloved one, with many objectives and benchmarks still a long way from being met.

Ahmetaj’s appointment as Minister of European Integration came after months of the position remaining vacant, following Collaku’s resignation in September 2016 to become senior advisor to President Hashim Thaci. As the vacuum extended from weeks to months, voices suggested that figures from the Democratic Party of Kosovo — which is responsible for European Integration as per the current coalition agreement — had even rejected offers to head up the ministry due to the longstanding failure to conclude the visa liberalisation process.

Forty-six-year-old Ahmetaj has been involved in party politics for the past decade, serving as a PDK deputy between 2007 and 2010, before becoming a senior advisor to Thaci, who was Prime Minister at that time. More recently she has been involved in international diplomacy, first as Kosovo’s Ambassador to Slovenia (2011-13) and most recently as Ambassador in Brussels (2013-16), where she handled issues with the EU, NATO, Belgium and Luxembourg. She says that her diplomatic experience and the knowledge and networks she has gained on a European level will help her in her new job.

Kosovo 2.0 met with Ahmetaj and asked about her views on Kosovo’s European path and the objectives she holds within the Ministry of European Integration. Ahmetaj spoke of her motives for taking the position of minister, the current uncertainties within the EU with Brexit and elections this year in France, Netherlands and Germany, where far right groups are on the rise, and how these international developments impact upon Kosovo’s European prospects.

K2.0: From September 2016 to February 2017, the Ministry of European Integration has functioned without a minister. In the media, it has been suggested that your appointment was eventually made after calls from international actors to fill the position. It has also been claimed that the position was rejected by certain political figures who did not want to be faced with the challenges that your predecessors faced, and who did not want to be associated with a failure, such as the ongoing failure to obtain visa liberalization for Kosovars. Did you feel an added sense of responsibility when you took this position?

Mimoza Ahmetaj: My predecessors are to thank for all the work that has been done and all that we have achieved to date. I feel a sense of responsibility for the position I am in. I will try to justify this responsibility that has been given to me as best I can. I must do everything in my power to achieve these objectives within my mandate. Now we wait and see how much we can achieve. 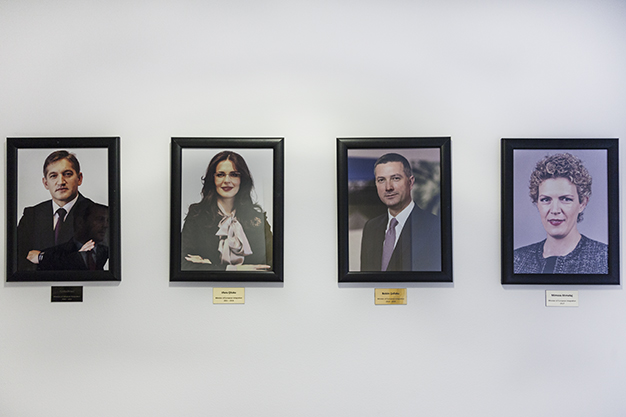 Mimoza Ahmetaj is the fourth Minister of European Integration since the Ministry was formed in 2010.

The government’s mandate appears to be approaching its end, with many people seemingly looking towards early elections. Is time a pressure factor in the path towards reaching these predetermined objectives?

Reaching those objectives is what puts pressure on me, not the elections.

How does it feel to be the Minister of European Integration at a time when the very existence of Europe itself is in question and when the far right wing is on the rise?

A very good question. I feel very responsible. There is no action I decide to take without considering it three or four times practically, without considering the political effects that it may have, and without taking into account the echo it could produce among public opinion and the EU.

As for the situation with the EU and the rise of the far right wing, I want to go into a deeper analysis to show that the fear of this rise now has other indicators. After Britain held a referendum and voted in favor of Brexit, fear of a potential domino effect affecting other countries grew within the EU.

The European Union is still the most advanced democracy, the biggest market and one of the biggest economies in the world.

However, recent presidential elections in Austria [in December 2016] have proven this is not the case — the candidate that won there is pro-European, not far right. Furthermore, attempts to make constitutional changes in Italy [also in December 2016] did not produce a domino effect of a growing far right. On the contrary, the strongest powers within the European Union are pro-European, not Eurosceptic. Brexit has mobilized all pro-European forces and made them more proactive.

How does this situation of uncertainty within the EU make you feel as Minister of European Integration?

The work towards European integration has nothing to do with feelings. It is a job, and politics is a relationship of interests, not motives. It is a relationship of the ambitions of the state and our citizens. We must not forget one thing: It took two world wars for the European Union to come to the decision that Germany and France must sit down and decide on a form of cooperation, and that was eventually built on three main principles — namely Freedom, Equality and Security — and now 70 years after the creation of the European Union, it is difficult to even think of its disintegration. The European Union is still the most advanced democracy, the biggest market and one of the biggest economies in the world.

Despite the fact that it’s been said that there will be no expansion, Kosovo has managed to sign the initial agreement and has advanced in the process of visa liberalization. Also, for the first time it will have access to the EU’s programs, which will enable our students, businesses and civil society to be more interactive. All Balkan countries have made progress.

However we have seen a stagnation in the enlargement process, and not only with the Balkan countries. The EU has not really expressed a lot of interest in enlargement recently. This stagnation is noticeable. Besides Kosovo’s signing of the Stabilisation and Association Agreement [SAA] in October 2015, what do you consider as progress in the path towards European integration?

There will be no admission of new members, as the head of the European Commission, [Jean Claude] Juncker said upon taking office. [In 2014 he said there would be no new admission for five years.] But there will be a continuation of the process towards integration, which means that the relevant states are obliged to conduct the predetermined reforms in order to become EU member states. The signing of the Stabilisation and Association Agreement as the first contractual agreement [between Kosovo and the EU] has set our European path in stone.

If you say that Europe is tired or uninterested in involving the Balkan countries, I will mention another argument. The visits of the High Representative of the EU [Federica] Mogherini, twice within a period of under a year, in Kosovo and the region tell a different story. In Kosovo we have continuously welcomed Commissioner [for Migration, Home Affairs and Citizenship, Dimitris] Avramopoulos, and Commissioner [for European Neighbourhood Policy and Enlargement Negotiations, Johannes] Hahn, will also visit soon. This shows that Europe and the European Union are quite interested in making Kosovo a part of it. We are geographically surrounded by EU member states, and as such we have no other path.

In fact, this is where I wanted to get to. Seeing that European integration is widely seen as the only path for Kosovo, is there another alternative, or a Plan B, in the worst case scenario in which the European project would fail. Does Kosovo have an alternative?

For Kosovo and the region there is no better choice than EU integration. Admission in the European Union brings political stability, economic development and more security. We make up a region in which wars were fought only 20 years ago, and as such it is still a fragile region that tends to be influenced continuously by external powers. In order to keep this region as stable as possible, the only path that we must follow is that of integration within the European Union.

However, Kosovo remains the only isolated country in the Western Balkans, because of visa restrictions. Do you think that this EU approach can create an atmosphere of Euroscepticism among Kosovars, something that we have not seen before in Kosovo?

The European integration process is not a job for one ministry or department, rather it is multi-departmental.

You were not a part of the ministry when demarcation with Montenegro was set as a condition. But when you speak with European Union officials, like Mogherini, do you ask them why such a condition was set?

I don’t question something that we have reached an agreement on five years ago, and neither does Brussels. Furthermore, Mogherini was not in this position when that condition was set. What is there to discuss?

The EU is not destabilizing Kosovo. The EU gave us the guidelines, we accepted them, and just as we fulfilled 94 other criteria, we must also fulfil the last one.

But it is not a technical criterion. I’ll give you an example. Ukrainian and Georgian citizens have recently received the green light for travelling in the visa-free Schengen Zone, despite the fact that these two countries have parts of their territory under Russian occupation. If it is a political criterion, it is negotiable, and if it is negotiable, have you requested the removal of this criterion from the EU?

Once again, any debate about demarcation and the guidelines is a debate that leads us nowhere.

I’d like to speak about the objectives of the Ministry of European Integration. How do you feel as a minister of European integration knowing that the main objective of your predecessors was visa liberalization, and that this objective was not reached? How do you see this issue as the new minister?

Kosovo’s top objective is integration within the EU. This is the main objective. The implementation of the Stabilization and Association Agreement is Kosovo’s priority. We have already begun conducting the necessary reforms. The European integration process is not a job for one ministry or department, rather it is multi-departmental. From the parliament, to the ministries, municipalities, presidency, all the way up to the prime minister’s office. So all factors must be in harmony in order to interact towards reaching this objective that we have. Our ministry coordinates all departments in this respect.

My objective is to see the SAA being implemented, and to see to it that the mechanisms that result from this agreement are functional.

And what does the implementation of the SAA offer Kosovo?

Its implementation translates into preparatory reforms towards integration. It is the harmonization of all laws with the Acquis Communautaire [EU law] as well as all measures that results from this agreement. My objective is also to achieve visa liberalization.

On the other hand, visa liberalization is not an integration process. Freedom of movement is separate from the process of European integration. Visa liberalization is also an objective for us, and we are one step away from achieving it. We were guaranteed by High Representative Mogherini on her last visit here that the moment the demarcation process is finished, Kosovo will advance further; it is not fair to keep our citizens isolated any longer.K